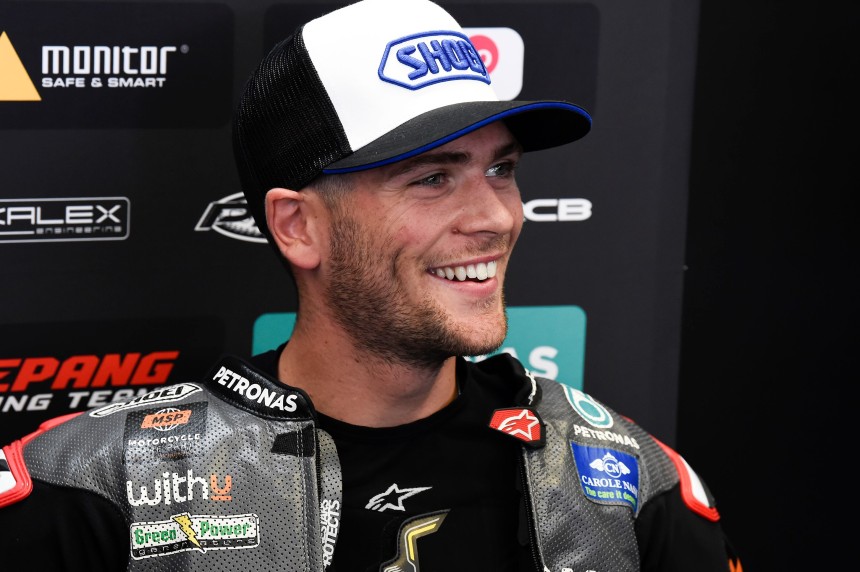 It has been a whirlwind couple of weeks for Carole Nash supported Grand Prix racer Jake Dixon. He usually plies his trade in the intermediate Moto2 class with the Petronas SRT team but for his home round, this weekend’s British GP at Silverstone, the 25-year-old has been promoted up to the premier MotoGP class. He’ll make his debut on a Yamaha YZR-M1 alongside non other than nine times world champion Valentino Rossi.

The 2021 MotoGP season has so far lacked a British rider, for all but the two Austrian rounds where veteran Cal Crutchlow has stood in for the injured Franco Morbidelli in the Petronas SRT squad. Now, Crutchlow and Dixon will both be lining up on the same grid on Yamaha M1s, sure to whet the appetite of the British fans.

We caught up with Jake to find out his thoughts ahead of the weekend’s action.

How does it feel knowing your first outing on a MotoGP bike will be at your home GP?

Yeah, obviously it’s great to have a debut in front of your home fans! I really can’t wait, and I of course want to thank the Petronas SRT team for the opportunity they’ve given me. I just can’t wait to get going now.

The last few weeks must’ve been a bit of a whirlwind. How did it come about that you’ll be riding the M1 at Silverstone?

To be fair I think the team started the rumour! I sort of found out about it and then after the second race in Austria they came and said to me that they’re going to put me on the Yamaha M1 MotoGP bike at Silverstone.

It’s obviously great to hear that, and I didn’t expect it! It’s going to be awesome, it’s going to be hard, but an experience that had to be taken that’s for sure.

Listening to other MotoGP riders, the Yamaha M1 sounds like it’s one of the friendlier bikes to ride. Do you think the M1 will suit your style?

So yeah, I’m definitely looking forward to it, and we’ll see what we can do!

Do you like Silverstone as a circuit, and do you have a good feeling going into the race weekend?

Yes definitely, I’ve gone well there in the past and I’ve had podiums there in the British Superbike championship. I went well there back in 2019 too, even considering the Moto2 bike I was on back then. [Dixon finished 23rd, on the Sama Qatar Angel Nieto Team bike].

You’ll be sharing a garage with nine times world champion Valentino Rossi – is that daunting, or something you haven’t given much thought to?

I think he’ll be more shell shocked to be in the garage with me! No, I’m joking of course, obviously it’s going to be great. Being able to share a garage with the nine times world champion, it’s pretty special to be his teammate and I’ll be able to learn a lot from him, so I’m definitely looking forward to that.

Have you had any messages of support from the other MotoGP riders?

Yeah, I have actually. Fabio [Quartararo, 2021 MotoGP championship leader] has, but we’re good friends and he’s always messaging me! Both Franco Morbidelli and Maverick Viñales have too, which was nice.

What are you looking forward to most from the British GP weekend?

I’m actually just taking it all as it comes, and like I say, it’s an experience and one that doesn’t come around too often! I’ll be taking it with both hands and giving it the best shot I can.

Do you have any targets or results in mind?

Nothing at all. I’m just going to go there, ride free and I think that’s the best way I can ride and the rest will fall into place, hopefully!

Is it just the British GP you’ll be riding the M1 at, or is there chance we’ll see more of you on it this season?

Unfortunately, the British GP is the only time the team have said I’ll be riding it. So I’m definitely going to make the most of it!

Finally, do you have any messages of support for the British fans at Silverstone this weekend?

Yes of course, I hope everyone comes in full support of me and the other Brits riding. I’ll be trying my best as much as they all will be too, and hopefully we can put on a good show for you and it’s going to be great to be back in front of a full British crowd again! They’re the best, and it’s going to be so good to be back home.

General admission tickets for the 2021 British Grand Prix are sold out, but you can watch every second of Jake Dixon in MotoGP action on BT Sport, sponsored by Carole Nash.