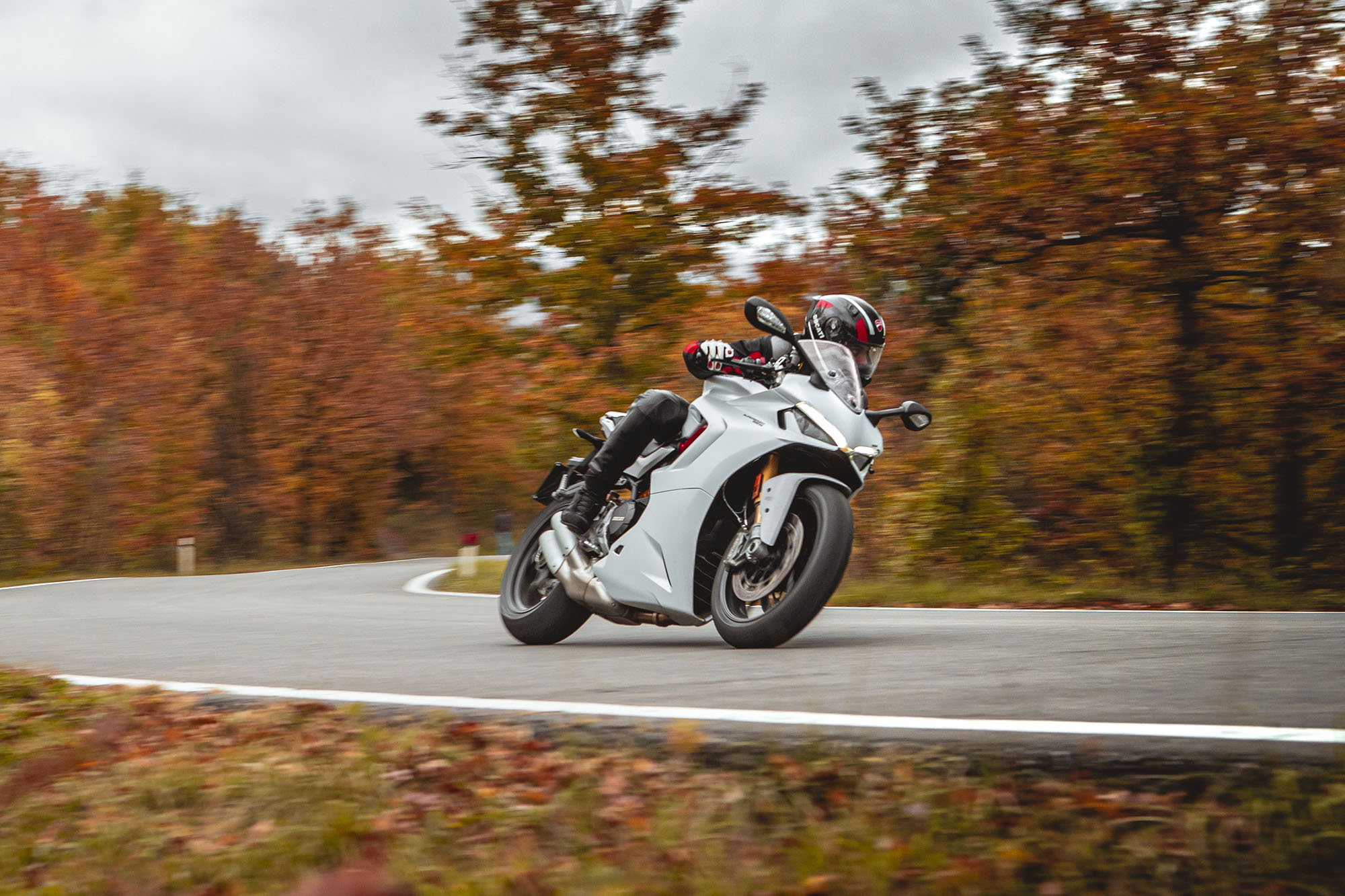 If you’re a fan of sports bikes but don’t fancy nursing a sore body after every ride, or struggle to even cling on to aggressively built track-weapons, then a halfway-house between performance and comfort is the right way to go… and the SuperSport range from Ducati is up there with the best of them. Sure, you’re probably aware that Ducati have always been known for creating some of the most hardcore two-wheeled weapons on this planet, but don’t worry, the SuperSport is not one of them. If you had a sliding scale that had sport on one end, with the likes of the Panigale V4R, and comfort on the other, with the likes of a BMW K1600, then I’d say that the Ducati’s SuperSport 950 sat itself smack bang in the middle with its high bars, low pegs and softer set-up in terms of both handling and performance.

And for the 2021 the package is all about evolution rather than revolution, as the SuperSport comes equipped with the same chassis, main components and engine combination, meaning that makes the same power and torque figures at 110hp and 93Nm respectively, it is now Euro5 compliant. There are a few big changes though, starting with a really smart aesthetics update which now only make the SuperSport more aerodynamic and better looking thanks to the sharper, smarter lines, but also improves the heat dissipation from the engine too, meaning that your nether regions won’t get quite so toasty on warmer days. This is coupled with a big electronics upgrade, as the SuperSport now comes equipped a quickshifter and autoblipper, along with a six-axis IMU that runs traction control, wheelie control, ABS and changeable rider modes, which is all fed through a smarter looking TFT dash.

Let’s not forget it has a new seat too for a more comfortable ride, and the ‘S’ model that we are testing also comes with gold Öhlins suspension both front and rear, alongside a rear seat cowl for good measure. The SuperSport range is the most wallet-friendly of the faired Ducatis, with the standard version priced at £12,295, while the ‘S’ version comes in at £13,895. So how does it perform? 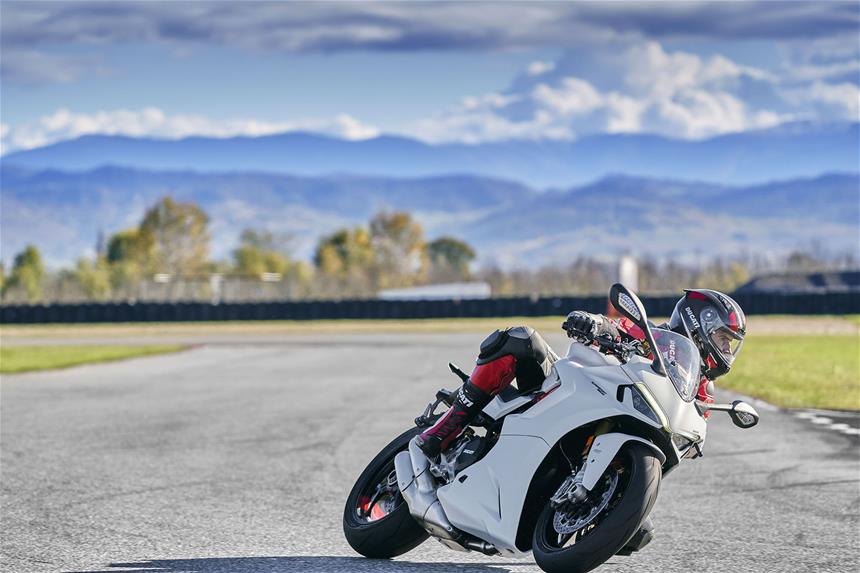 Personally, I like my sporty bikes to look aggressive, and on appearance alone Ducati really have hit the spot. Staring at the sharp, antagonistic lines and that bold red colour scheme, you could almost be fooled into thinking that it was a full-fat Panigale… until you feast your eyes over the high-rising handlebar set-up. What they add in comfort, they definitely lose marks for in superbike appearance. Saying that though, the finish on the 950S is spot on, and having those little gold Öhlins logos on the forks and shock really does echo a certain level of quality, too. Jumping on, the first noticeable thing is the fairly low seat; Ducati’s thin, twins usually feel high but the SuperSport sits down at 810mm, meaning my miniature legs could touch the floor with ease. And that was pretty handy as the next noticeable thing was the weight, which although isn’t massive at 210kg ready to roll feels hefty at a standstill, and fairly lowdown too. Saying that though, the SuperSport feels more like an armchair than a superbike, with a soft seat, high ‘bars, low ‘pegs and about as much room as you’d find on a first-class British Airways flight. The SuperSport’s cockpit is a real nice place to be as well, with the updated dash being incredibly user friendly, and everything being exactly where I expected it to be, from the indicators to the ignition button.

And when that ignition button is hit, the 937cc Testastretta engine fires out that gorgeously familiar twin cylinder soundtrack that really does echo more go than the spec sheet would come to suggest. Setting off, there are three riding modes on offer, but even in ‘Sport’ mode (the most aggressive of the three) the SuperSport felt incredibly smooth and soft, and not too aggressive in the slightest. The way that Ducati have crafted their ride-by-wire throttle is nothing short of a masterpiece, making slow speed riding an absolute doddle, but when combined with the impressive turning cycle and the fact that the shifter/blipper works a treat throughout the rev range, the SuperSport feels like an effective weapon for cutting through traffic - but for something built for comfort over sport, I’d have been disappointed with anything less. On the open road, the Ducati feels seriously at home cruising along, and it will sit happily on the motorway without buzzing along while providing a surprising amount of wind protection, although I must admit, cruise control wouldn’t have gone a miss. It’s comfy too, and after a full day in the saddle, I felt as fresh as a daisy. 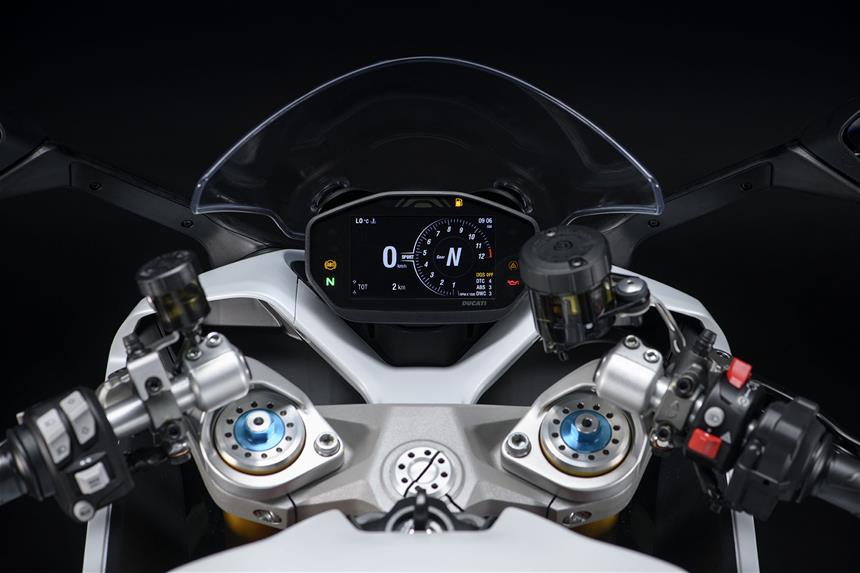 Super, but is it sporty?

But then again, if you wanted a Ducati with road manners that was comfortable, you’d probably be sitting on a Multistrada by now and the fact that this thing is called a SuperSport, should make it at least fairly handy if you fancy getting a move on. The thing is, that’s where the SuperSport does hit its limitations, with the only real thing holding it back being the amount of power that it has to haul the fairly hefty weight. Don’t get me wrong, it still pulls impressively through the rev range with enough urgency to keep things exciting 99% of the time, but the redline just seems to hit way sooner than feels right on a big capacity sportsbike for when just want that little bit extra.

It’s not too much of a big deal though, as the rest of the SuperSport 950 really is impressive. Being on the higher-spec ‘S’ version, the fully adjustable Öhlins suspension feels absolutely incredible when cornering, offering bundles of feedback throughout the stroke, yet still soaking up the bumpy UK tarmac with ease, without feeling too soft or spongy. I was glad they did too, as that Brembo braking set-up offers a monstrous amount of power when it comes to scrubbing the speed off, offering a load of initial bite and feel. Even the electronics are dialled in to perfection, with Ducati using their tried and testing six-axis IMU to power the aids, to give a nice level between control, and interference that’s easily adjustable to your preference. Sure, it doesn’t have the stiffest suspension, sportiest stance or the most ground clearance, but I’d love to see the SuperSport with the Panigale V2’s 150bhp engine, as I really do think that would be near enough a perfect combination. 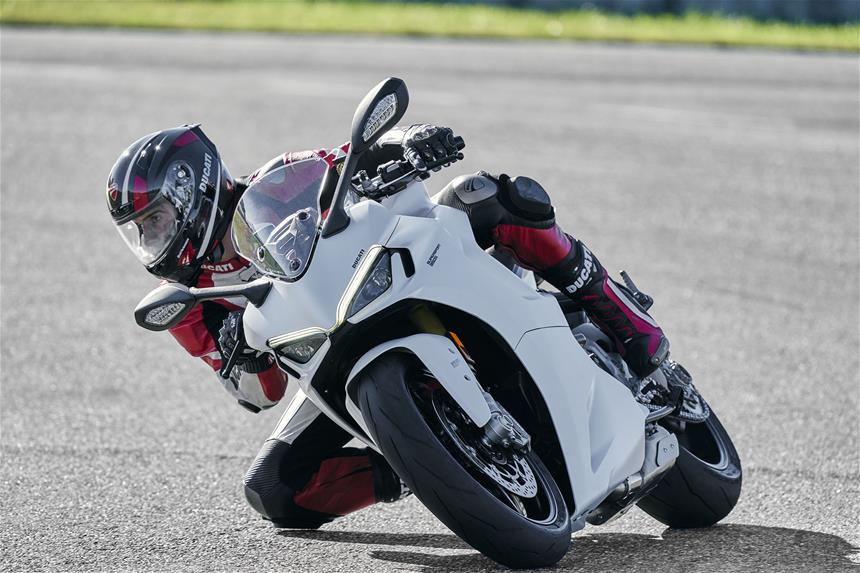 Ducati’s range of sports bikes aren’t renowned for being user friendly or for their road-going etiquette, but the SuperSport 950S really is an exception to the rule. It really is a refined, comfortable and good lucking machine that’s packed with tech if you want something that’s fairly sporty and that won’t make you pull a muscle with every ride. And I say fairly sporty because although it handles well and comes equipped with some serious kit in terms of its components, it won’t offer the performance of a full blooded sportsbike. But then again, if you want that, buy a Panigale.

Sports tourers have faded in popularity in recent years, replaced on the whole by adventure bikes like Ducati’s own Multistrada. That said, machines like the SuperSport still attract a loyal following – and rightly so. If high mileage and comfort is more important to you than cutting up lap records, then this is a cracking tool for the job.