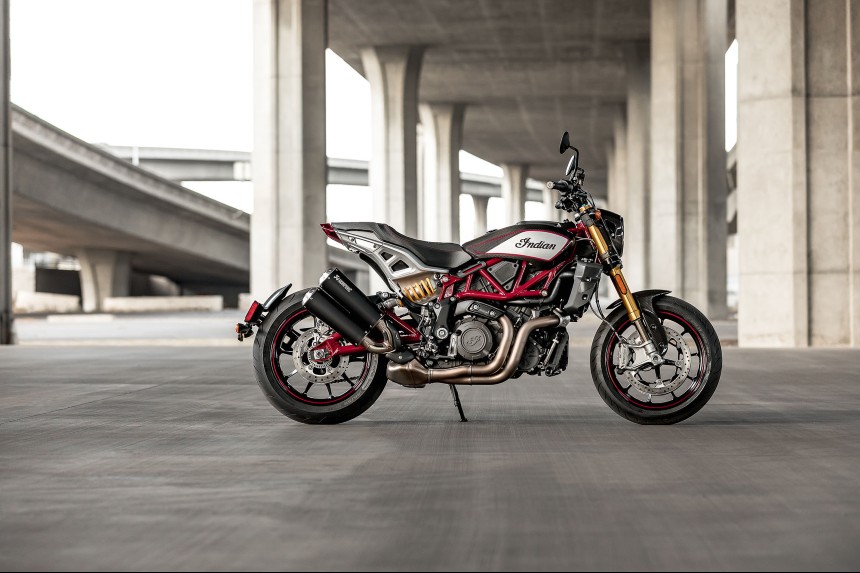 Rarely have I posted a bike on social media that’s gotten so much engagement, and whole host of ‘that’s lovely that mate’ comments, as the Indian FTR1200 R Carbon. And there’s a good and simple reason for that. Just look at it.

Blending the styling of the all-conquering £50,000 factory-built Indian Motorcycles FTR750, which has been cleaning up in dirt track races across America, with the 123bhp 1200cc motor derived from the one found in the Indian Scout cruiser, the Indian FTR1200R is one of the best-looking naked motorcycles on the road. 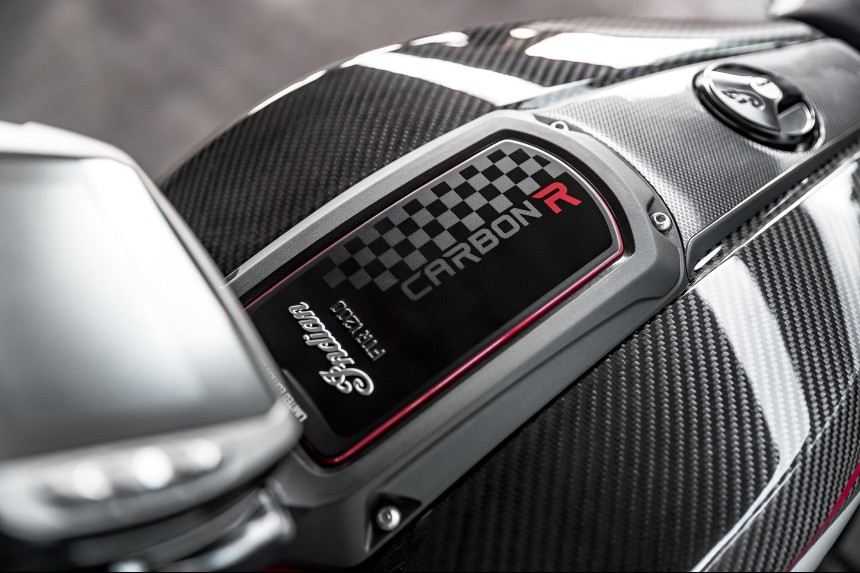 Sure it has an eye on retro, but its full of modern touches like traction control, cornering ABS, and three rider modes (sport, standard and rain), all of which are operated on a full-colour 4.3-inch touch screen which is incredibly simple to use. Alternatively, you can control it with a joystick on your left thumb, or by actual buttons on the screen. The Indian FTR is full of quality touches. Just look at that carbon for a start.

Then there’s the Ohlins suspension front and rear, that Akrapovic dual-ended pipe, and that sexy little seat unit… And that tubular red-painted swingarm.

For 2021 the Indian is some 3kg lighter. It still weighs in at a heady 232kg fuelled but gets chassis changes including shorter trail and a steeper head angle, which results in a much sharper handling bike. On the ‘R’ tested here the 18 and 19-inch wheels have also been dropped in favour of 17” wheels fitted with track-day spec Metzeler Sportec RR tyres. Which, with traction-control, wheelie control, rear lift mitigation, and ‘just’ 123bhp you would trouble to ever unstick on the road, despite a lofty 88.5ft-lb (120Nm) of torque. 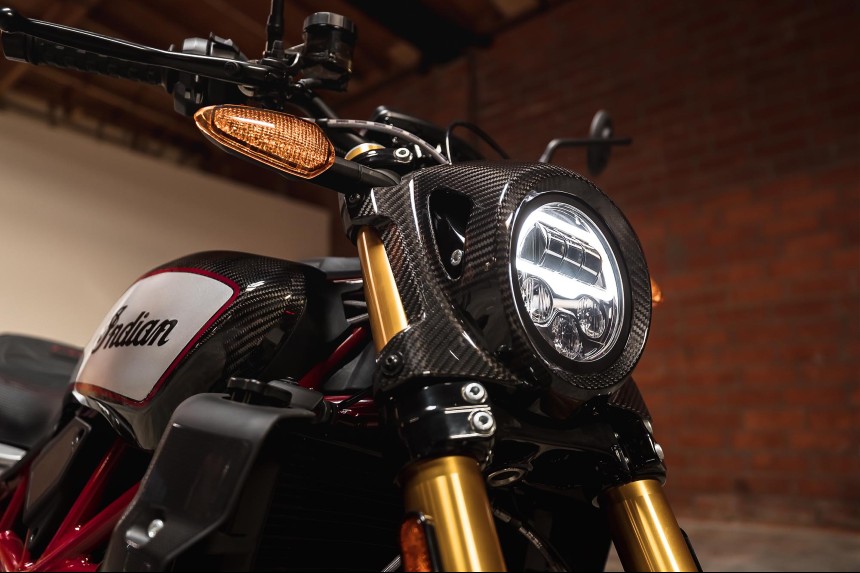 It’s no slouch though. The motor is quite unlike any other naked bike. The shuddering power of the cruiser motor at the bottom end means tons of torque between 3000rpm and 5000rpm, and then a big shove up to the redline of 9000rpm.

The gearbox is a bit slow, like most cruiser motors, but it stays hard on the torque curve and has a natural speed limiter of 123mph, which is the point when the wind started to push my nose so hard into my helmet that I was forced to shut off. On a test track, of course. To be fair though, I have got a very big nose!

Like the Ducati Monster 1200S, it feels like there’s not much in front of you but the road. There’s barely any clumsy screen to get in the way, you sit very forward and there’s just you, a big motor, and a fat set of Ohlins forks. 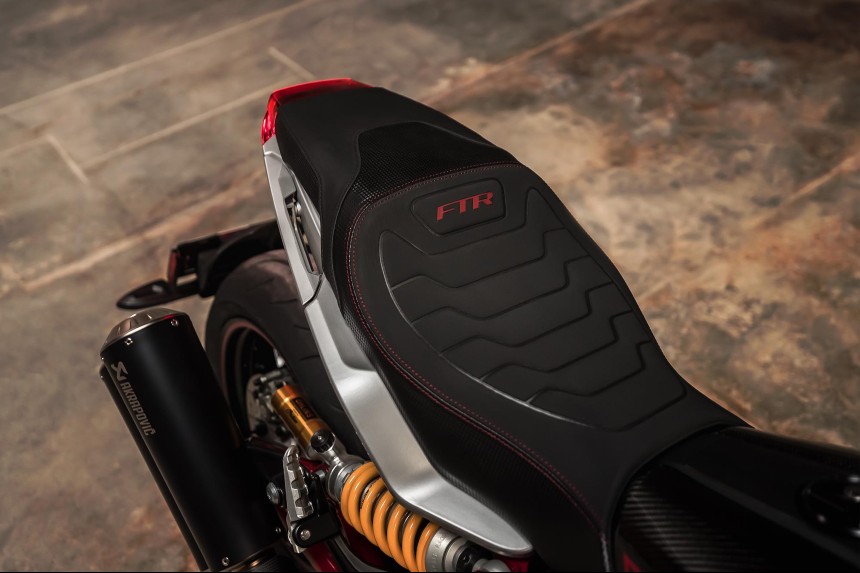 The seating position pushes you forward into the tank, and the pegs are higher than you expect. And that tank. At 13 litres you’ll be on first name terms with the staff at the local petrol station – it’s got a range of around 80 miles if ridden at pace, with the ability to stretch to around 110 miles if ridden more sensibly.

But the bike’s chassis package allows you to feel like a road riding legend on sweeping corners, braking late, and using the decent corner speed to attack. I also had a ride on a mate’s older FTR 1200 Rally and that felt way more like the dirt track legend it is pretending to be. That feels much longer and lazier, and rolled on 18” rear and 19” front wheels, squirming around on semi-knobbly tyres.

If you’re in a more cruiser type mood, the FTR1200R is happy chugging around using all that torque and short shifting at 5000rpm.

It’s clever too. To keep heat down in traffic, the bike automatically cuts the rear cylinder, effectively becoming a single cylinder at tickover, as long as the motor is at 85 degrees or above. It’s technology often used on big multi-cylinder performance cars, but a first for bikes. If you’re sat stationary you can feel it cut in, but as soon as I moved back it cut back to two cylinders again. It’s clever, and barely noticeable. 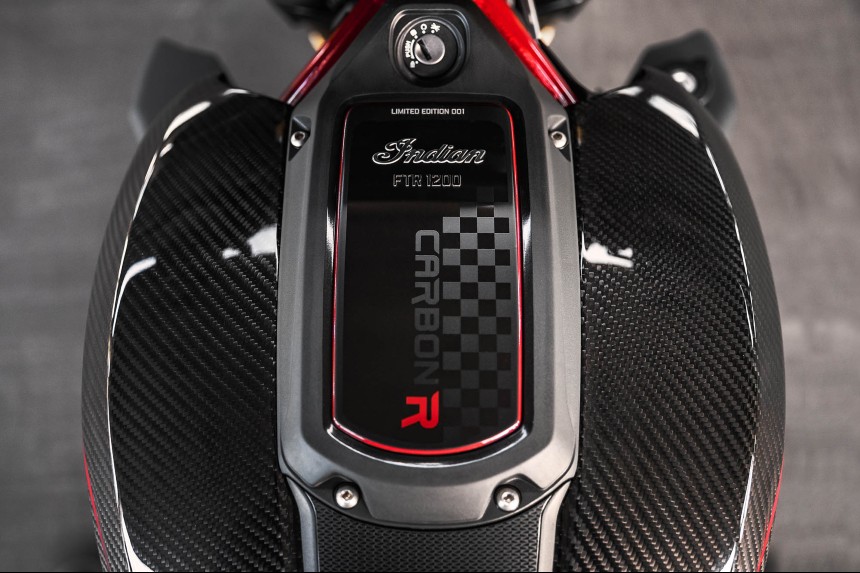 The Indian Motorcycles FTR1200 R is a heady mix of cruiser and dirt track styling that’s quite unlike any bike I’ve ever ridden before. It’s very well put together, carves up a quick road thanks to decent handling, has excellent fully-adjustable Ohlins suspension, and sharper geometry. And that big, torquey motor is an absolute throbbing gem.

If you don’t like attention, don’t buy this Indian because you’ll have admiring glances and questions about it everywhere you stop. There’s nothing else quite like it and that makes it all the better for it. I loved the week we had with this bike. The only real downsides are its weight and the tank range.