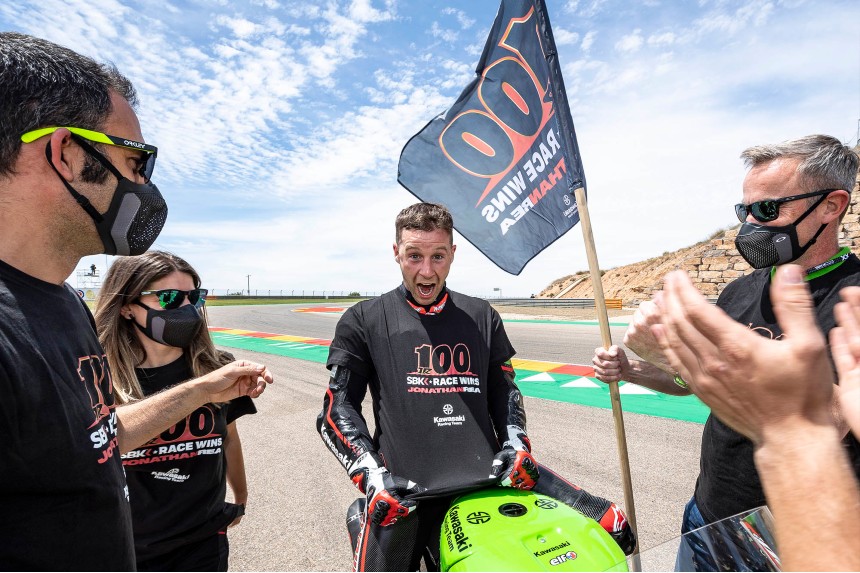 Carole Nash ambassador Jonathan Rea shows no sign of ending his dominant streak in the Superbike World Championship, winning two out of three races in the opening round of 2021 to head the standings and become the first racer to score a century of race wins.

Heading into the season on 99 wins, the six-times consecutive champ qualified on pole position and led from start-to-finish to hit his milestone win, and an 85th success with Kawasaki in the races at Spain’s Motorland Aragon circuit yesterday.

Redding at least had the consolation of denying JR a clean sweep in the afternoon’s full length race, which was also held in damp-but-drying conditions. Rea again chose the intermediate option, but his Ducati-mounted rival made a bold move to run full slick rubber and was able to ease his way into the lead on lap six of 18, before pulling away to win by almost 10 seconds. Rea took the flag second to extend his championship lead to 12 points over Kawasaki team-mate Alex Lowes. The Lincolnshire rider was also on the podium in all three races, in an ominous debut for the updated-for-2021 ZX-10RR.

That said, Rea was lucky to even finish the race. After leading the first two laps he slid back into the clutches of his slick shod rivals. American Garrett Gerloff made an ambitious pass to take the lead on lap three but crashed, hitting the world champ and causing him to take avoiding action through the gravel trap. Using his skills as a motocross rider he was able to rejoin in fourth and work his way back through to second, although he had no answer to Redding and the superior grip of his slick shod Ducati. 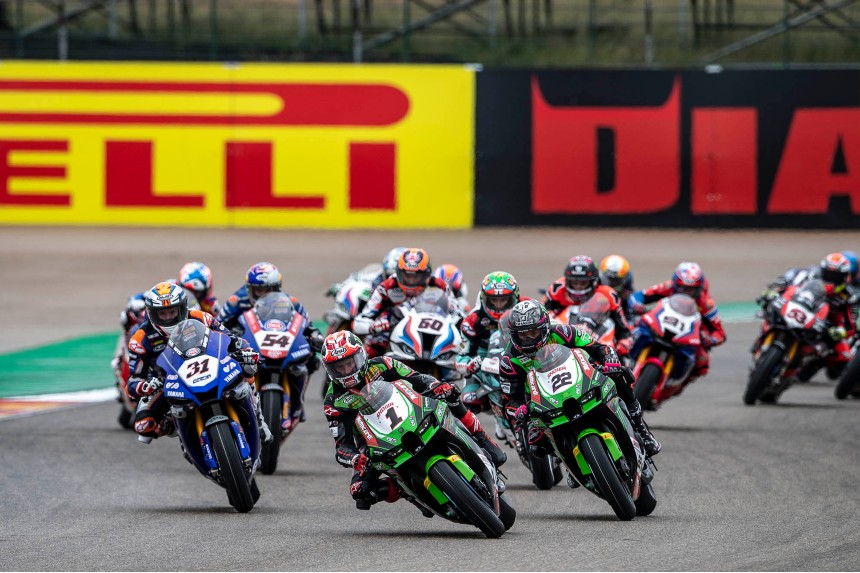 After the races Jonathan said: “I am really content with the weekend because to win the first race of the season was 100 times better than last year, and also to claim my 100th victory was a real target of mine. Today, I never experienced conditions like this in my whole career, where it really is a big tyre choice by the minute. Every minute it changes. With three minutes to go in race two I was asking Pere (Riba, Crew Chief) if they still had slicks on the grid!

"The superpole race was the first time I had ever raced the intermediate tyres so huge kudos to Pirelli (because the tyre continued to work well on a drying track). I decided after that experience to use that tyre choice in the final race as well. It was the safest option. It wasn’t the right one, but it was the safest one, for sure. The majority of the grid had that combination. I realised that I was going to race for second but second feels like a win. The only way we could have been more competitive is with the right tyre choice. From that point of view I am really happy and excited for Estoril next week.”

Despite Rea’s near dominant performance, the 2021 Superbike World Championship is shaping up to be a good one. Yamaha’s Gerloff and Toprak Razgatlioglu scored the remaining two podium finishes and looked competitive on one of the YZF-R1’s weaker circuits, while the new BMW M 1000 RR showed pace and gave Tom Sykes a fourth place in the weekend’s final race. Redding leaves Spain third in the standings, with fellow British Ducati rider Chaz Davies also quick throughout the weekend.

The championship now moves to the Estoril circuit next weekend. Razgatlioglu took two of the wins at the Portuguese circuit last year, with Davies victorious in the other.