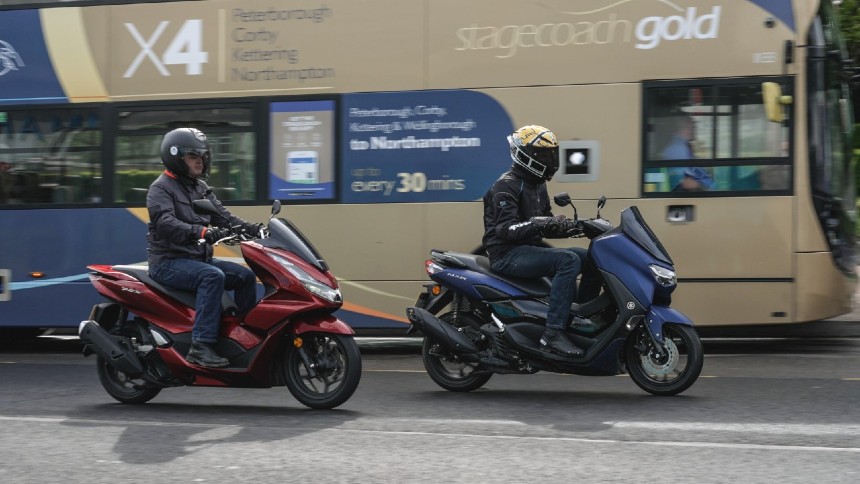 There’s a good reason why 125cc twist and go scooters consistently top the UK sales charts. They’re super easy to ride, practical, inexpensive and can be ridden on a provisional licence. From commuters to couriers, they’re the perfect workhorses for so many people.

None is more popular than the Honda PCX 125, first introduced over a decade ago and the UK’s best selling powered two wheeler for most of that time. In recent years it has been joined by Yamaha’s very similar NMAX, another big seller and the most popular bike of 2021 to date, no less.

Both of these chart topping scooters have been thoroughly updated for this year, so we rode them back to back to check out their relative strengths across seven key areas we’d look for when buying a scooter.

They say that humans form their first impressions about something within seconds, and my initial thoughts about the PCX and NMAX were positive. Both of these scooters are very elegant and come presented in premium feeling single colour schemes.

Which of those is best is really just a matter of personal taste. Personally, I think that the Yamaha looks a little more youthful, while the Honda’s car style dashboard is a bit more grown up than that on the NMAX. I can’t choose between the two.

A big attraction for these scoots are the low running costs. All things being equal, we’d expect insurance and depreciation costs to be roughly the same for both machines. Each offers excellent value and have strong fuel economy, easily achieving 100mpg and with official consumption figures around 130mpg under the standardised WMTC test.

That said, the Honda is the more frugal of these frugal machines, travelling around one mile more on each litre of fuel. Add in the fact that it costs £231 less to buy (£3169 to £3400 at the time of writing) and the Honda wins on the value front. 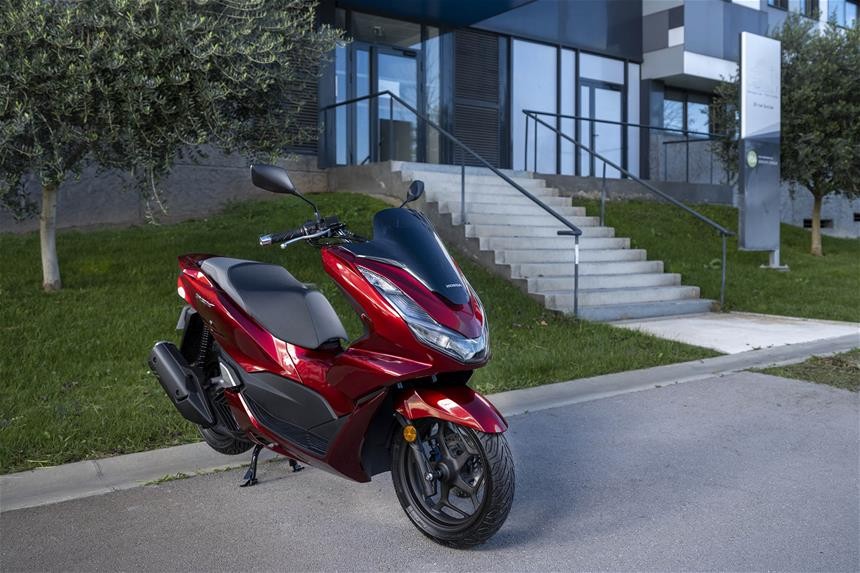 Another one that’s subjective, and both provide adequate comfort for the daily commute. However, for this tester, the Yamaha’s flatter and more generously padded seat, combined with ergonomics that felt more ‘in’ than ‘on top’ and plusher suspension gave it the nod. The PCX has a firmer and more sculpted seat, which was still comfy, and a more perched riding position. Different shaped people might disagree, but I preferred the NMAX.

Automatic scooters are more likely to be judged on their fuel economy than their top speed, but sharpness away from the lights and an ability to keep up with traffic are good safety features that are not necessarily enjoyed by all 125s.

The previous generation NMAX was a good bit quicker than a PCX of the same vintage, but Honda’s new four-valve engine means that the two are now evenly balanced on top speed.

They can both cruise at 60mph but, thanks in the main to the variable valve timing system in its engine, the Yamaha still enjoys better acceleration from a standstill, which is particularly welcome in urban riding. 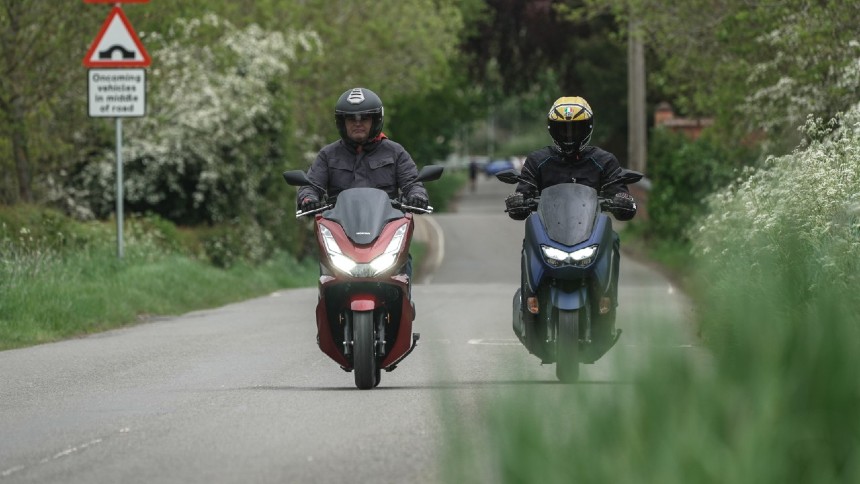 Guess what, it’s another close call! Honda has closed the gap to Yamaha in the spec sheets. Both now have anti-lock brakes and traction control, excellent safety features, keyless ignition and on-board charging points for devices.

Personally, I preferred the more versatile cigarette lighter style 12v outlet on the Yamaha to the USB-C item on the Honda, although you’ll need an adapter to plug in your phone. Both have LED lights and start/stop systems to cut the engine (and therefore emissions) at standstill.

Yamaha’s accessory range includes a tall screen and plenty of luggage options, while the Honda can be specified with plug and play heated grips and a top box that’s matched to the bike’s central locking system. It’s too close to call on this one.

Scooters need to be practical and the PCX takes a big win here. The under seat storage area is much bigger, and there are two cubby holes up front to the Yamaha’s one. Wind protection and weight are more or less the same, although the PCX feels a bit easier to wheel around. 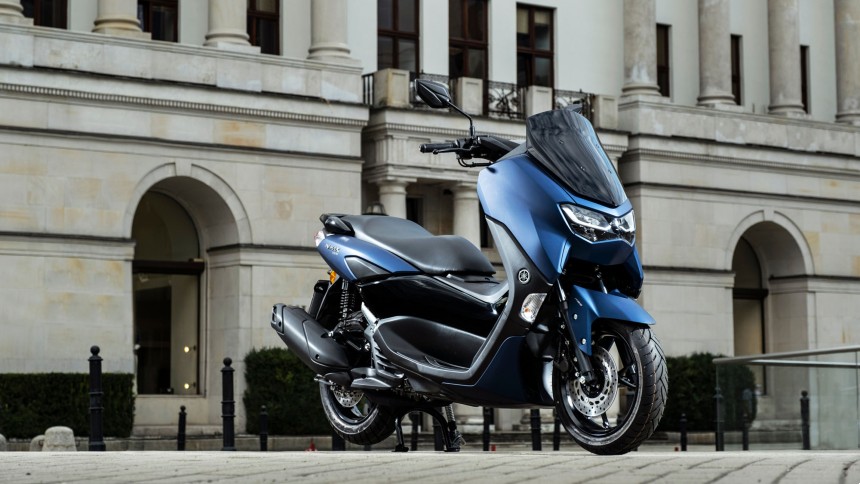 Handling is another area where the latest generation PCX has closed the gap to the NMAX. Previously the Honda felt a bit skittish against its rival and while the wider wheels and Michelin tyres now mean it feels more composed, the Dunlop shod Yamaha still feels a little more agile.

In terms of brakes, the latest NMAX ABS system is a big improvement on the old model, which could feel very intrusive under hard braking. The PCX also gets ABS on the front disc and although its more than adequate, the brakes are less sophisticated and lack the bite of those on the Yamaha – especially the old fashioned cable operated rear drum.

Picking a winner between these two is tough, and as much about personal preference as anything else.

It’s funny, if you look at our scores it’s a 3-2 win to the Yamaha, but where the Honda really excels are in the areas of costs and practicality – arguably two of the most important attributes you’d want from a 125cc scooter.

Sure the NMAX is probably a little more fun to ride. It has stronger acceleration, sharper handling and better brakes, and I think it’s slightly more comfortable for me too. All of these ‘wins’ are by the narrowest of margins but, for all that, the PCX 125 just has an intangible togetherness that made it this tester’s favourite.

Practicality is a huge selling point for scooters and the significantly bigger and better shaped under seat storage space in the Honda will more than offset any small deficit away from the traffic lights for some. The fact that it’s cheaper is a bonus as well, but the truth is that both these scooters are outstanding. You’ll be the winner, whichever one you choose.

Want to know more about these two popular scooters? Check out our comparison video above and read our comprehensive reviews of the Honda PCX 125 and Yamaha NMAX on Inside Bikes.