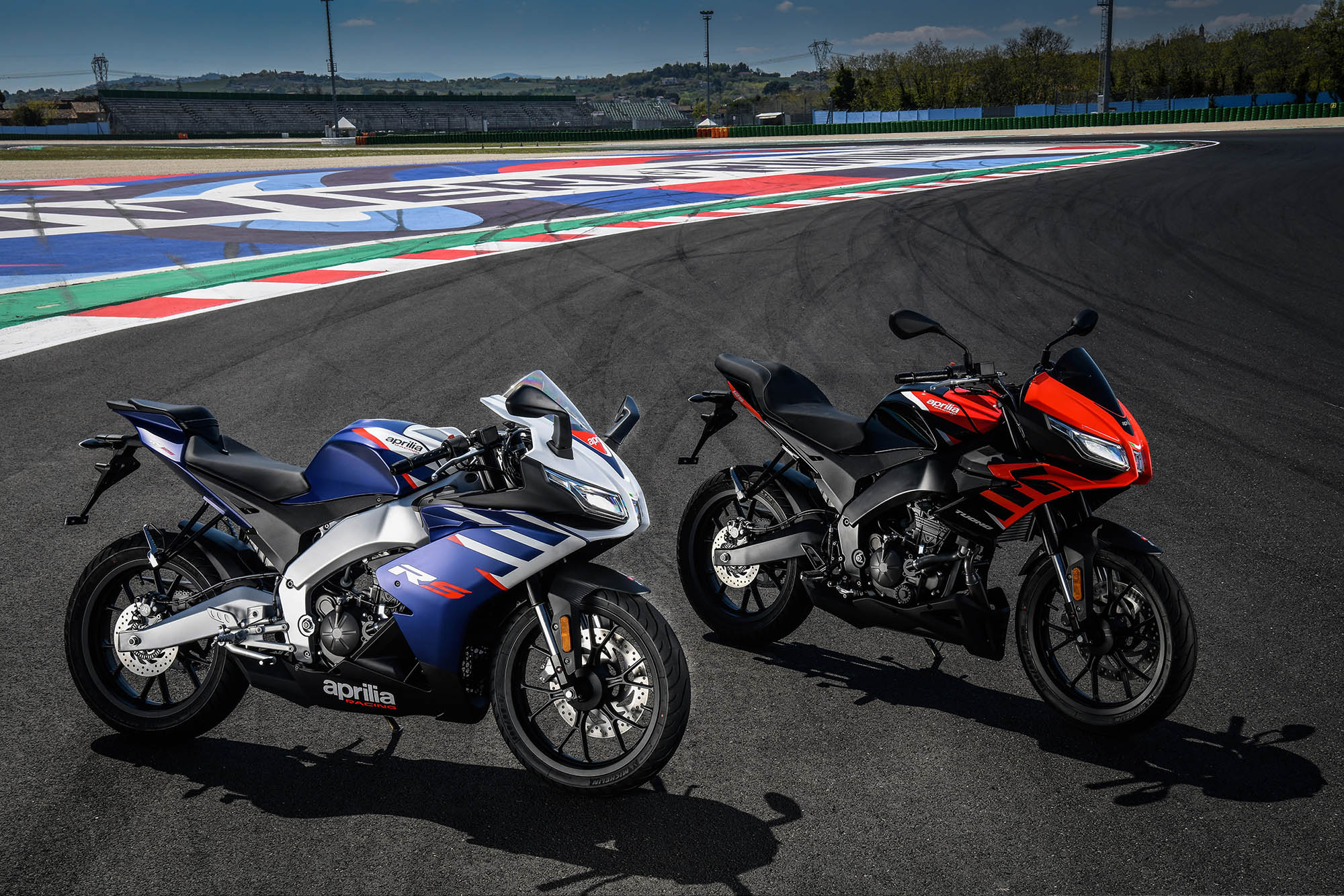 The outgoing RS4 125 was a four-stroke replacement for the legendary, Grand Prix inspired, RS125 two-stroke that was on sale between 1992 and 2012. Built to A1 licence laws, the RS4 had all the looks of the RS125, even if the clean running engine lacked the performance of the original. Despite the stunning styling, which was a scale replica of the RSV4 superbike, the Aprilia never really captured teenage hearts in the way that the 1990s bikes did. And although the latest incarnation remains steadfastly restricted to a learner friendly 11kw (14.75bhp) of power output, Aprilia have thrown a bunch of new technology at its mini masterpiece as it aims to take on the big hitting KTM RC 125 and Yamaha’s YZF-R125 in the battle of the learner legal sports bikes.

In a class where steel frames are the norm, the Aprilia features an aluminium twin spar chassis with a racy looking asymmetric swingarm. The styling has also been revised, bringing the eighth-litre model in line with the bigger RS 660 and RSV4 superbike, while the switch to Michelin Pilot Street tyres promises a more reassuring handling than the outgoing RS4 125, which wore budget Mitas rubber. Lighting is now LED all round, with the front indicators hidden away and built into the headlamps.

Bigger changes take place under the skin, with a new incarnation of the four-valve single cylinder engine to comply with the Euro5 regulations. The cylinder head is completely new and features a more aggressive cam profile. Combined with a new exhaust, air filter and relocated throttle body, the shape of the torque curve has been improved while peak power is delivered lower down the rev range. Shorter gearing promises stronger acceleration, while fuel consumption is also claimed to be improved, thanks in part to a new engine management system courtesy of Magneti Marelli. The RS 125 also gets a track-derived quickshifter – quite a spec for a 125!

Continuing the big names, Bosch have developed the two-channel anti-lock braking system, and they work in conjunction with a radially mounted caliper gripping a 300mm front disc, with race style braided steel hoses to add a premium feel, as well as improved stopping power and feedback at the lever.

Overall there’s a feeling of greater quality and a spec sheet that wouldn’t be out of place on a full-sized sports bike. There’s a comprehensive digital dash, complete with fuel gauge and range calculator, and Aprilia’s MIA app allows for the rider’s smart phone to be connected – allowing for even more on-board computer functions.

As well as the race replica style RS125, the semi-faired Tuono 125 is also heavily revised for 2021. Sharing the same platform and basic spec as the RS, the Tuono features a smaller upper fairing and foregoes the quickshifter. It comes in three colour combos: Aprilia’s traditional black and red racing colours, white or grey. The RS125 offers two options inspired by Aprilia’s racing heritage, with the purplish ‘Sintesi Blue’ joining the MotoGP-esq black and red combination.

Prices are still to be announced, but expect a small premium over the £4499 (£4399 for Tuono) of the outgoing model.