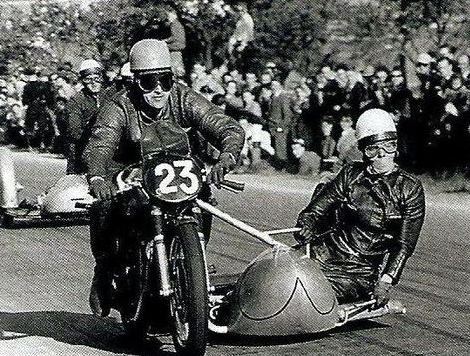 Female motorcycle racers are ever growing in number but are sadly still few and far between compared to their male counterparts.

Over the years there have been many successful women racers that have flown under the radar, and our female motorcycle racers series aims to explore these legendary ladies of the road.

This time we’re taking a look at Inge Stoll, A German racer who broke new ground, before her career and life ended in tragedy.

Setting Off At The NSU Motorenwerke

Born in Brand in Bavaria, Germany in 1930 – Ingeborg Stoll-Laforge began racing from a young age at the the NSU Motorenwerke, a German manufacturer of automobiles, motorcycles and pedal cycles.

In 1947, she competed professionally, as a female passenger in her father’s NSU outfit. This was the beginning of her sidecar career in motorcycle racing.

After a number of years competing, it was 1952 that saw Stoll join forces with sidecar driver Jacques Drion, becoming his passenger for a number of notable races.

Making History In The TT

It was 1954 that saw the controversial decision to reintroduce the Sidecar TT race into the Isle of Man TT. A 10 lap competition, held over two legs, taking place around the Clypse Course.

The Isle of Man TT event was already infamous as the world’s deadliest race and the decision to include the Sidecar TT was unpopular with many motorcycle manufacturers at the time. This was mainly due to the risks involved, but they were also against the inclusion of Stoll herself, due to her being the first female competitor at any Isle of Man TT race.

Stoll and Drion managed to successfully compete at the 1954 TT, making history by snagging an impressive 5th place finish.

The Stoll and Drion sidecar outfit was racing at the Czechoslovakian Grand Prix, a non-championship event in 1958, when tragedy struck.

The Czech Grand Prix already had a reputation for being an extremely tough and dangerous racing route. In 1937, several spectators standing in a prohibited area had been killed, when German racer Hermann Lang lost control and skidded off the track.

During the fateful 1958 race, Stoll and Drion had been comfortably holding second place until the penultimate lap, which saw a sharp right-hand corner force the pair off the road. Their motorcycle struck a fence and overturned – Stol sadly died instantly, with Drion passing away a short time later in hospital.

Even though her life was tragically cut short, Inge Stoll will always be remembered as a pioneering female racer – and deserves special recognition, not only for her bravery during her racing career, but also for fighting against the sexist dogma of the times.