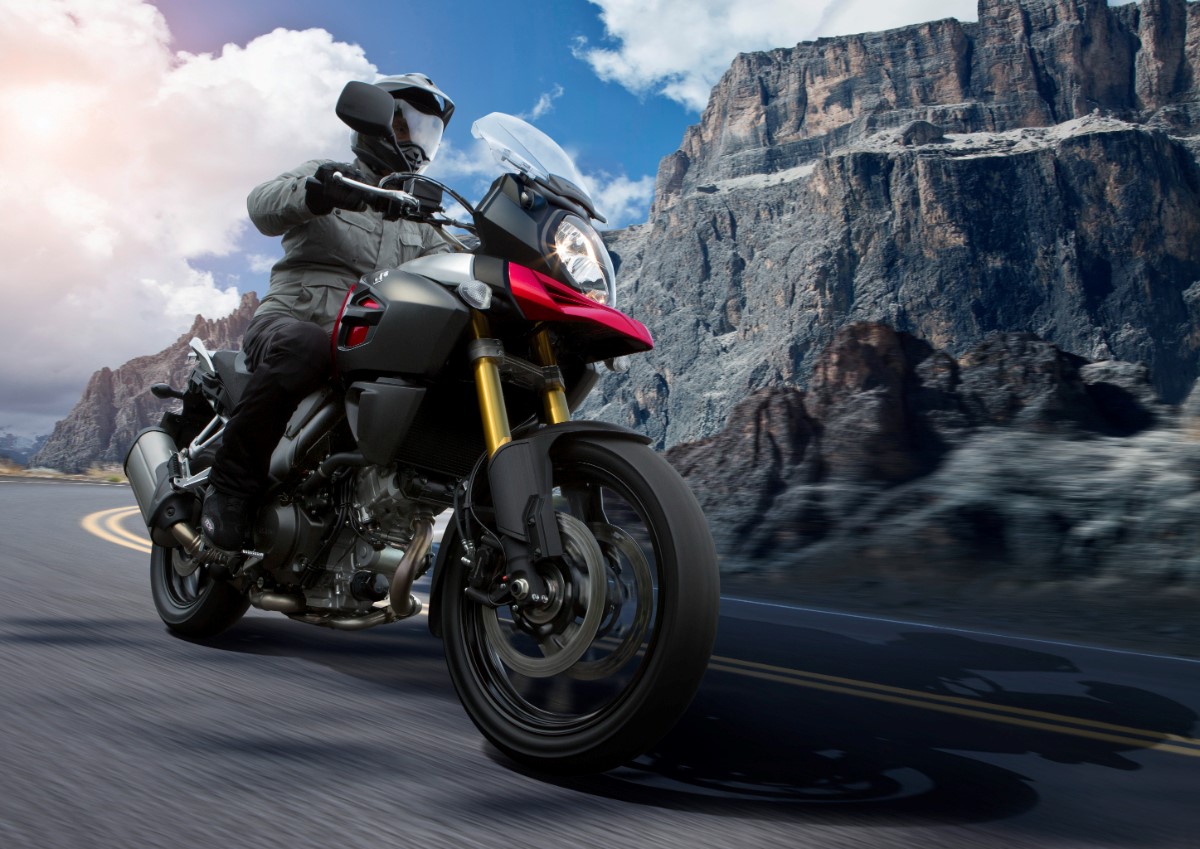 Adventure motorcycling has been around as long as adventurous people have ridden motorcycles, but since the turn of the millennium the sales of adventure bikes have been skyrocketing.

Every major manufacturer has been after a piece of the adventure pie, and over the last couple of decades we have seen a huge selection of adventure bikes, big trailies, dual-purpose machines, whatever you want to call them, flying out of showrooms –and Suzuki’s biggest V-Strom is one of the most iconic of the lot.

The whole adventure bike craze started with the unveiling of the BMW R80 G/S back in 1980. The G/S was something new and exciting at the time, and not many could have anticipated how far the ripples of this splash would travel. By the time Suzuki presented the V-Strom 1000 to the world in 2002, the segment was already hotting up nicely. Sure we were still obsessed with our sports bikes, but a host of Paris-Dakar inspired big trailies was about to change all that.

Leading the charge at the start of the century was the then latest adventure bike from BMW, the R1150 GS (and its ‘Adventure’ variant), launched in 1999, and made immortal by Ewan McGregor and Charley Boorman on their Long Way Round trip.

Suzuki’s Japanese competitors all had something to offer for riders looking for adventures too. Honda’s Africa Twin and Transalp, Yamaha’s Tenere and the Super Tenere, and Kawasaki’s KLR650 had been around for a good while. Sure, Suzuki had its own DR-range of dual-sports bikes, but just like their competitors’ bikes, these were more Dakar than Paris. The GS had shown that adventure bikes could be great on the asphalt too, and Suzuki wanted a piece of things.

Despite being surrounded by Dakar replicas when the covers first came off the DL1000 V-Strom, the V-Strom clearly represented a road-focused take on adventure biking.

Suzuki had already had a nice selection of dual-sport bikes in the ‘90s, such as the DR350, DR650 and the legendary DR (800) Big. These were all dirt-oriented bikes with ok road manners, and next to them the V-Strom looked more like a sports tourer than an adventure bike… Where the DR-range was built around offroading capability with road-riding as a bit of an afterthought, the first V-Strom 1000 that rolled off the production line in 2002 was the exact opposite – a road bike with a sprinkling of dual-sport attitude. And while the DRs were all singles, the V-Strom pinched the V-twin engine that had previously run in the sportier TL1000S and TL1000R models.

That engine was a liquid-cooled 996cc DOHC, four-valve 90° V-twin with refined fuel injection to improve fuel economy and extend cruising range. It made 98bhp at 7,600rpm, and 101Nm at 6,400rpm. Dry weight was 207kg, thanks in part to the aluminium frame.

When launched, the first-generation V-Strom looked adventurous when surrounded by the ubiquitous sportsbikes of the day, but it doesn’t look too far removed from a sports tourer if you go by today’s aesthetics. It didn’t even feature the signature adventure ‘beak’, although the high level front mudguard style originated in Suzuki’s own DR Big. Back then, most motorcycles were so resolutely sporty or naked, that you didn’t need a beak to make an adventure claim (although that soon changed, and Suzuki changed with the times, but more about that in a bit…).

The V-Strom remined largely unchanged for a long time. In fact, it didn’t get a major update for 12 years. During that time it only got minor updates, like the addition of fork preload adjusters, more powerful alternator, new clocks, and faster processing ECU. With the engine struggling to keep up with tightening emissions regulations, production stopped in 2009, but not for long. 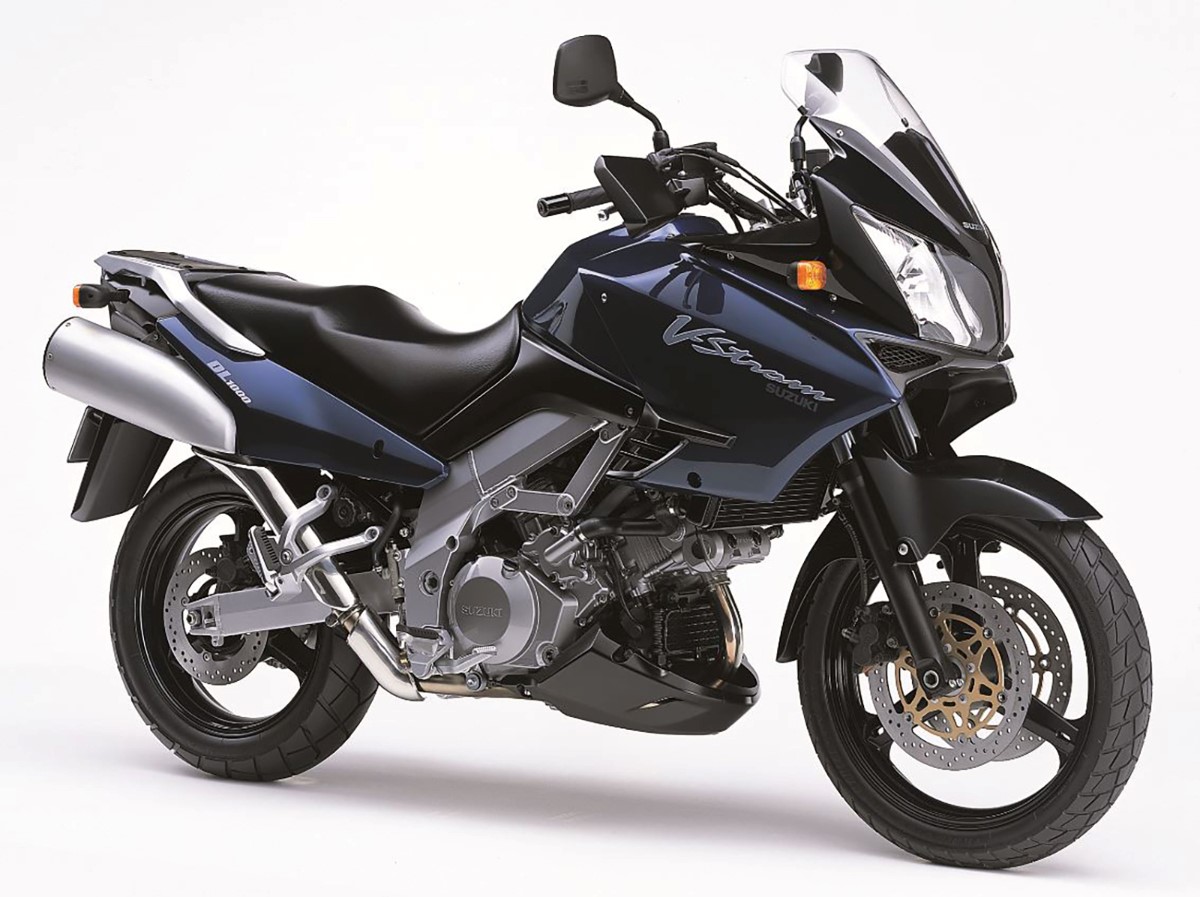 The V-Strom returned in 2014 with its first major overhaul. Dictated by emissions regulations, the existing engine capacity was increased to 1036cc, which could be made more environmentally friendly without scarifying performance. In addition to being cleaner, the new engine also produced more power, especially in the low and mid-range. Peak power was now claimed at 100bhp at 8,000rpm, while torque was up to 103Nm at 4000rpm. Wet weight was claimed at 228kg.

Other updates included a traction control system, ABS, and an LCD instrument cluster. The screen was now adjustable as well. The frame had been redesigned to be lighter, the swingarm was longer, and the wheels had a new design. Forks were chunkier 43mm items. The V-Strom was slowly getting the techy bells and whistles, cleaning its emissions act, and trying not to put on too much weight.

The exhaust system was new, with the end can sitting noticeably much lower, but the big visual change was that the V-Strom now got a beak, as a nod to the lineage from the DR Big. The beaky look of adventure bikes may divide opinion, but if anyone can claim the right to it, it has to be Suzuki. 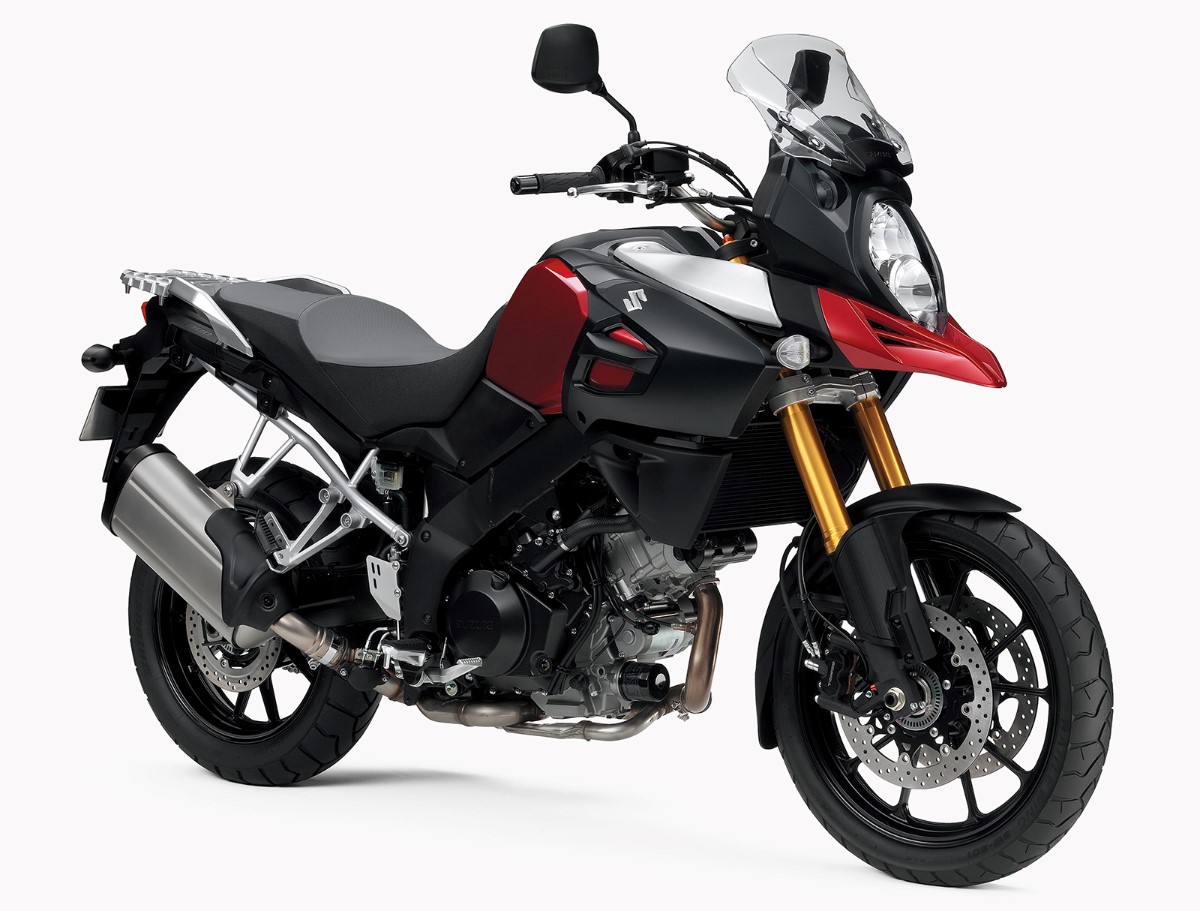 In 2017 the V-Strom 1000 was updated again to meet the Euro4 emissions regulations. Internally, the engine remained largely unaltered with the changes mostly to do with fuel injection, ECU and catalytic system. The performance figures remained pretty much the same: power figure was unchanged, while torque dropped ever so slightly, but not enough for riders to really notice it.

New features included a low-rpm assist, which slightly increased the revs to help prevent a stall when setting off, and Suzuki Easy Start System with a one-touch starter button.

There was also a five-axis Bosch IMU to allow cornering ABS. The brakes were also linked, so the front also activated the rear for increased stability.

The first things you noticed about the update were a new nose cone, stacked headlight arrangement, and a taller screen. Handguards and bellypan were now standard, too.

An XT version was available with spoked wheels and tapered handlebars.

2020 was a big year of change for the V-Strom. It got more power, a bigger brain, and a snazzy adventure look inspired by its DR ancestors.

Despite the moniker going from 1000 to 1050, the engine remained the same 1037cc V-twin, now sorted for Euro5 emissions regulations. However, rather than strangling the engine, Suzuki managed to get more power out of the motor, with a claimed peak power of 106bhp at 8,500 revs. Maximum torque was now 99Nm at 6,000revs.

The techy side got a significant update with a five-axis Bosch IMU, ride-by-wire, improved traction control and cornering ABS, hill start, and ride modes. There was still no semi-active suspension or the real high-end gadgets that some of the competitors offered, but overall the electric arsenal was looking a lot healthier.

Arguably the biggest update in 2020 was the looks of the bike. Based on design cues from Suzuki’s legendary DR-Z desert racer and the DR Big, the V-Strom featured new colour schemes, more rugged and purposeful attitude, with nice touches like the vertically stacked headlights. And naturally, the beak stayed put.

There was a standard and XT versions of the bike, with the XT boasting all the bells and whistles, and a more offroady stance with wire-spoked wheels. The standard model was more modestly equipped, and more road-oriented in looks and performance. 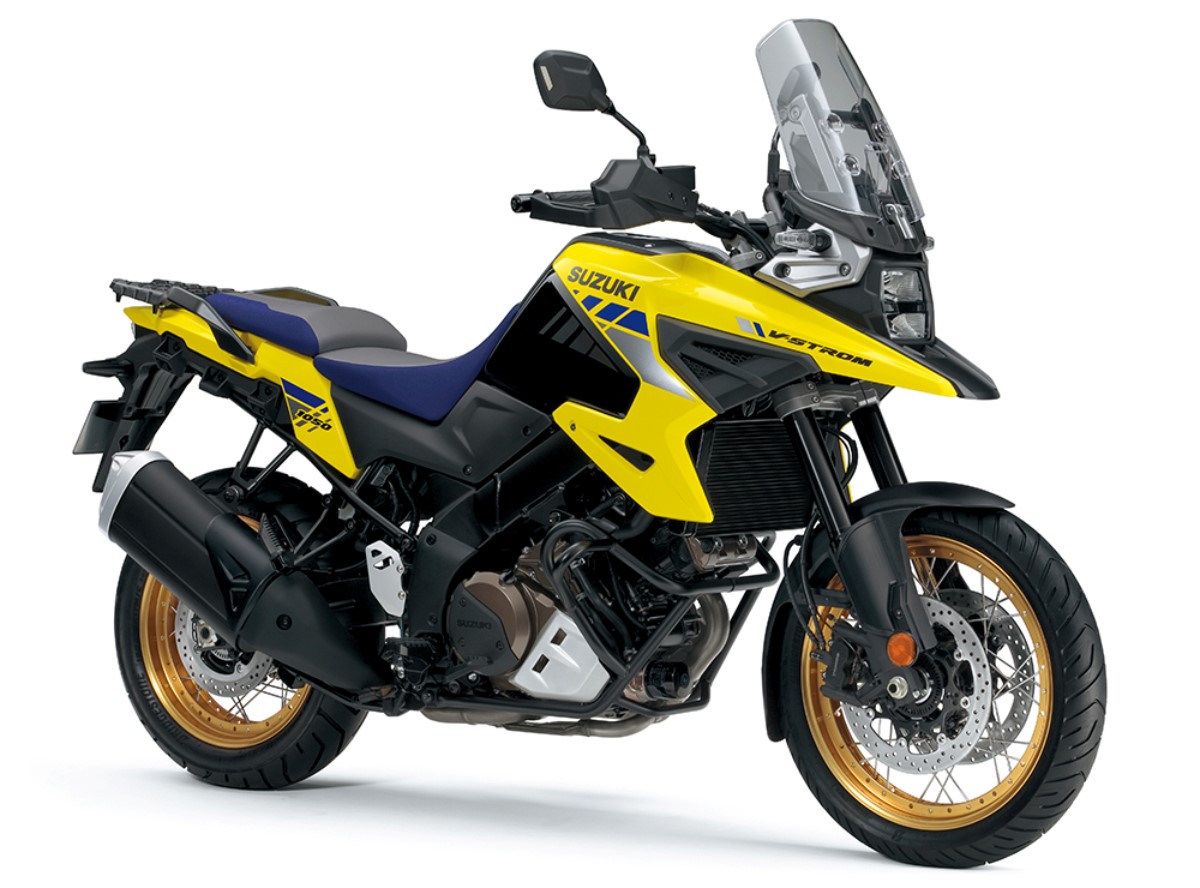 As we write this, the latest generation of Suzuki V-Strom 1050 has already been revealed, although we are still waiting to ride the bike.

There will be two variants, the standard bike and the more adventurous DE model.

New features will include a bi-directional quickshifter, improved rider aids, a 5-inch TFT dash. The DE will also get a 21-inch front wheel and a longer swingarm, better controls for traction control and ABS, as well as increased wheel travel and wider bars and footpegs for better dirt riding.

The engine is the same as before, with only moderate improvements, so the power and torque figures remain unchanged.

With the new updates and a clearer distinction between its road and trail versions of the bike, Suzuki looks to keep the V-Strom in the mix of popular options for a large-capacity adventure bikes.

The V-Strom might not be the most exciting or flashy machine available, but its reputation for reliability, comfort and easy handling, not to mention good value for money, have earned it a decent following over the years. 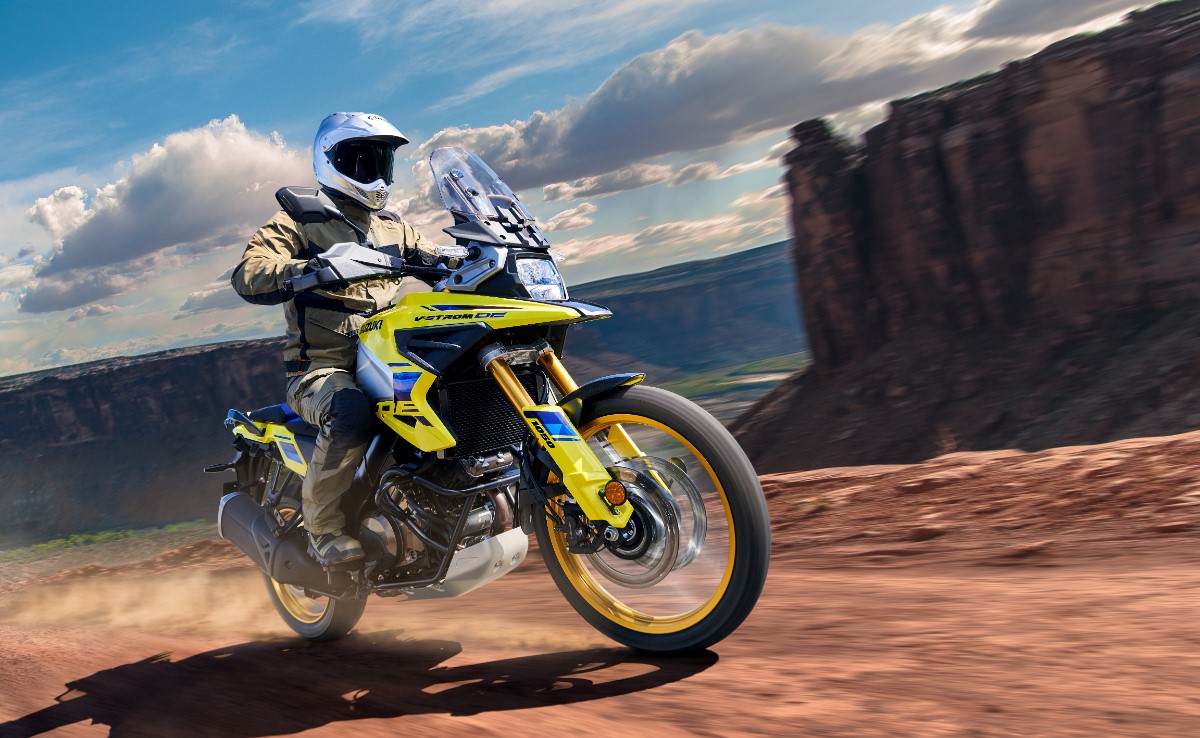 The flagship V-Strom has inspired a couple of smaller models along the way. Suzuki DL650 V-Strom was launched in 2004, powered by the 650cc V-twin borrowed from the SV650. The bike is still in the range and has enjoyed a reputation as a cost effective way to get into the adventure bike market.

The V-Strom 250 was added to the family in 2017, running a 248 parallel twin rather than a Vee. The baby-Strom didn’t really convince the markets, and production was stopped in 2020.

Another parallel twin V-Strom is set to hit our shores in 2023, with an all-new V-Strom 800DE set to go on sale in spring. Sharing the same 776cc motor as the GSX-8S roadster, it sits between the 650s and the flagship 1050s in Suzuki’s adventure range.

There have also been some interesting one-off custom V-Stroms, such as the special V-Strom 650XT project from Arenacross title-winning SR75 World Team Suzuki. The bike showcases what a V-Strom 650 could look like if it got a proper supercross treatment with bigger 21-inch front wheel, upgraded and raised suspension, RM-Z450 bars and pegs, race pipe, and mean SR75 race bike looks.