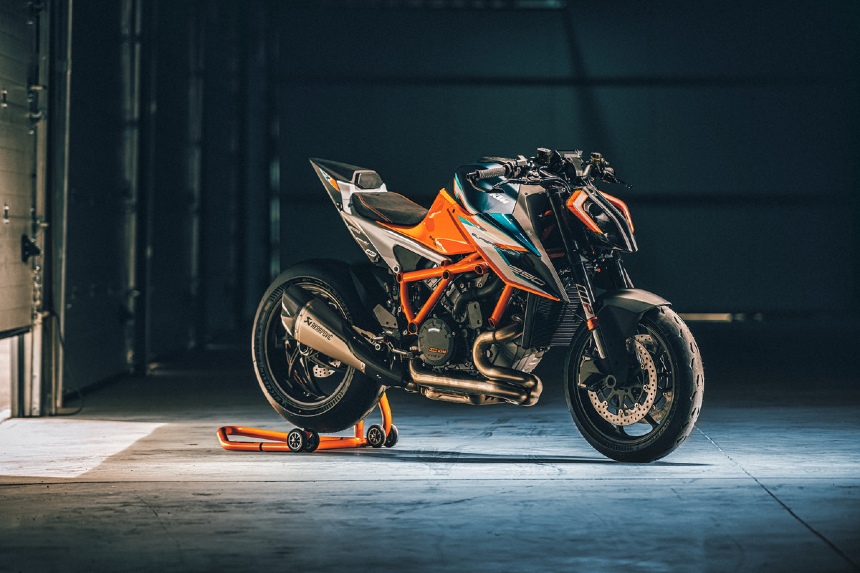 KTM’s 1290 Super Duke R has earned a reputation as one of the most aggressive motorcycles on the market today, and now the Austrian firm has introduced a limited edition ‘RR’ version dripping in exotic parts and boasting a staggering spec sheet.

Just 500 examples of the £21,499 KTM 1290 Super Duke RR will be built, with European sales exclusively through KTM’s website. Unlike Aprilia’s more expensive, track-only Tuono X, the 1290 Super Duke RR is road legal and priced to compete with Ducati’s Streetfighter V4S.

The key story is a drop of 9kg over the Super Duke R. The 1301cc RR makes a claimed 180bhp to haul around just 180kg, to create the legendary 1:1 power to weight ratio.

KTM have thrown some of the best components in the business at the 1290 Super Duke RR. Unsprung weight is down, a key element in creating a more agile motorcycle. The wheels are 1.5kg lighter than standard and wear race style Michelin Power Cup 2 tyres. Suspension, of course, comes courtesy of KTM-owned WP, and is their top spec kit: Apex Pro 7548 close cartridge forks upfront, with an Apex Pro 7117 steering damper and Apex Pro 7746 rear shock. Also contributing to the weight saving is a race style lithium-ion battery, shedding 2.5kg over the standard model, and carbon fibre bodywork.

KTM is pitching the 1290 Super Duke RR as a track day sleeper. As standard, it comes with a lightweight titanium and carbon fibre Akrapovic end can, with a full exhaust system available as an optional extra. The team behind the RR have also created new performance electronics modes designed for track riding, while even the new short throw, quick action throttle has been designed to give greater control while cranked right over in corners.

Orders can be placed at www.ktm.com from April 8.