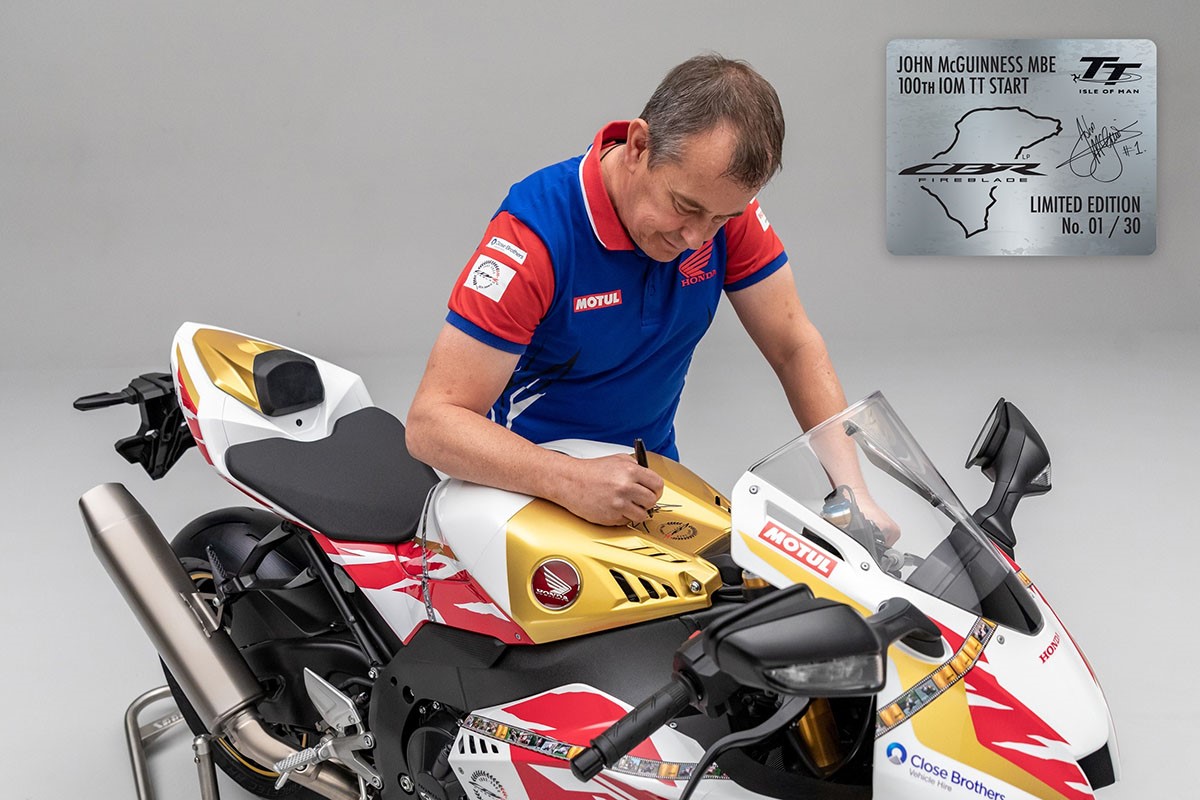 Honda is building a limited run of 30 very special examples of its CBR1000RR-R Fireblade SP, honouring its Isle of Man TT legend John McGuinness – the 23-time TT winner who made his 100th start around the iconic road course earlier this year.

Taking Honda’s already mighty 200bhp flagship superbike as its base, the McGuinness edition features a number of neat details and even a handover from the man himself to warrant the £6,000 premium over the regular 30th anniversary Fireblade.

The custom livery of the McGuinness’ ‘Blade echoes that used by the legend during for his 100th TT start back in June, it features gold detailing, sponsor logos, McGuinness’ signature on the airbox and a film effect design with pictures from the rider’s previous TTs.

Honda have committed to making no more than 30 examples of the special Fireblade, and each will carry a numbered plaque on the headstock. Other special stuff includes lightweight carbon fibre front mudguard, carbon rear hugger, rear seat unit and a TT style tall screen. High spec Metzeler Racetec RR tyres will also be fitted, and Honda will also chuck in a garage mat, bike cover and a laser engraved crystal featuring a design of McGuinness’ 100th start replica trophy. Buyers will also have the opportunity to receive their bike personally from McGuinness at Honda’s UK race workshops in Lincolnshire.

Commenting on the replica, McGuinness said: “The stars aligned for me to be back on a Honda Fireblade for my 100th TT start. It’s an awesome bike and has meant so much to me over my career. And, if I think about it, to so many other riders over the last 30 years too. I’m proud of my connection with its place in TT history and of this, my replica. There is no event like the Isle of Man TT in the world and this motorcycle celebrates Honda’s, and my own part, racing in it. That feels good. Really good.”

Fancy seeing one of these in your own garage? Pop down to your local Honda dealer for more information.