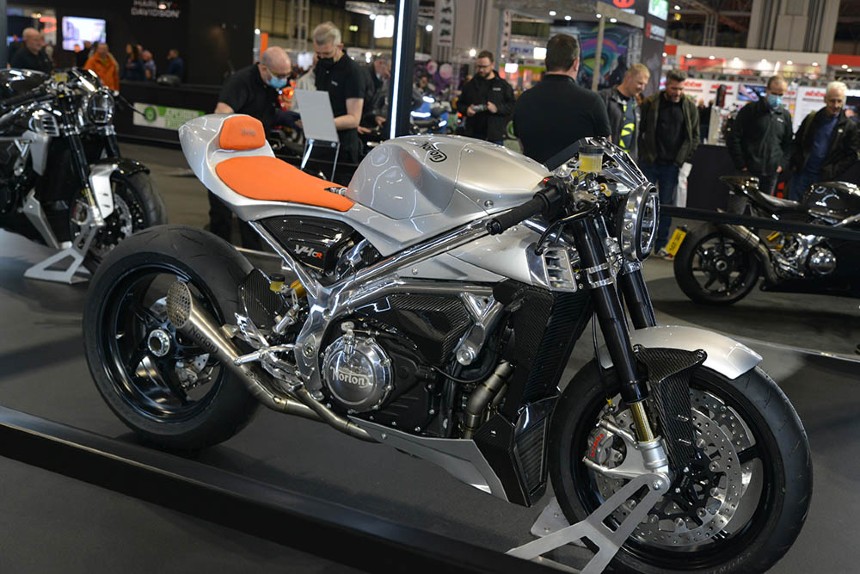 Fresh from the opening of their new factory, Norton unveil their latest prototype.

Although we’re yet to see any of the new V4SV superbikes out on the roads just yet, that hasn’t stopped Norton from pushing on in the next stage of development of the rejuvenated British brand. With their new factory being unveiled just a few months back, Norton are looking to turn the marque back into the success story it once was, with the latest creation being a café racer prototype dubbed the V4CR.

As you can imagine, it shares the same platform as the V4SV, with the 185bhp 1200cc V4 engine at its heart. It’s then been stripped back as a café racer should, with a carbon fibre fuel tank alongside carbon fibre pody panels, which compliment a polished billet aluminium swingarm and frame. The V4CR also comes equipped with a shorter rear frame than the superbike model, for that aggressively stubby stance.

Although the new V4s are based on the heavily criticised machines developed during the troubled Stuart Garner period, Norton say that they have heavily revised their V4 engine and the overall platform over the last 16 months, since Indian company TVS took over, putting it through tens of thousands of road mileage to make it a solid, reliable unit.

We were lucky enough to catch up with Dr Robert Hentschel, the Chief Executive Officer of Norton Motorcycles, at the recent official opening of their new headquarters, and gained a glimpse of the new machine at Motorcycle Live. If it goes as well as it looks, then we’ll be in for a treat.

Although there’s no word on any price or availability for a production model, we won’t imagine it will be too soon, or cheap. Dr Robert Hentschel, the Chief Executive Officer of Norton Motorcycles said: “The prototype VC4R is the next step in Norton’s strategic growth plan on its journey to becoming the world-leader in luxury hand-crafted motorcycles.”

We just can’t wait to swing a leg over the new generation of Nortons when they are finally unleashed.