A century on… Moto Guzzi hits a major milestone

One of the most historic motorcycle brands of all time, Moto Guzzi celebrates its centenary in 2021, so what better excuse to look back on the heritage of this still very traditional company…

It was on March 15 1921 that the first Moto Guzzi motorcycle was made. It was the vision of Carlo Guzzi, Giovanni Ravelli and Giorgio Parodi, who had decided to set up their own motorcycle company a few years earlier. The friends were colleagues in the Italian Royal Navy’s aviation corps during World War One. They were all from different backgrounds but had a common love of motorcycles, while complementing each other with their skills and connections.

Parodi came from a wealthy background and would bankroll the new company, while Guzzi was a talented mechanic and engineer. Ravelli was famed as a top pilot and motorcycle racer, whose reputation would have helped promote the fledgling company’s product. Sadly he would never see the project come to fruition, as he was killed in an air crash in 1919, just days before the end of the war.

Based in Mandello del Lario, on the banks of Lake Como in Northern Italy, the new company took the name ‘Moto Guzzi’ and used an eagle as its logo – a nod to the air corps and aviation background of its founders.

Giorgio Parodi and his brother Angelo were the shareholders in the new company but they largely stayed in the background. The first prototype they produced in 1919 had borne the initials ‘G.P.’ for ‘Guzzi-Parodi’ but with the Parodis keen to avoid any conflict with their shipping company, the name ‘Moto Guzzi’ was adopted when production started in 1921. Although not a shareholder in the company, Carlo was reported to have received a royalty on every motorcycle sold.

Guzzi was highly regarded as an engineer, having developed his trade in the cutting edge world of aviation. The first prototype had employed technology learned during the pioneering days of aircraft, especially in the ignition system, unit type gearbox and a four-valve, overhead camshaft cylinder head. However, the first machines to go on sale, called the ‘Normale’, were much simplified for production. The Normale still used an innovative horizontally mounted single cylinder engine and made an impressive (for the time) 8bhp, driving through a three-speed gearbox. 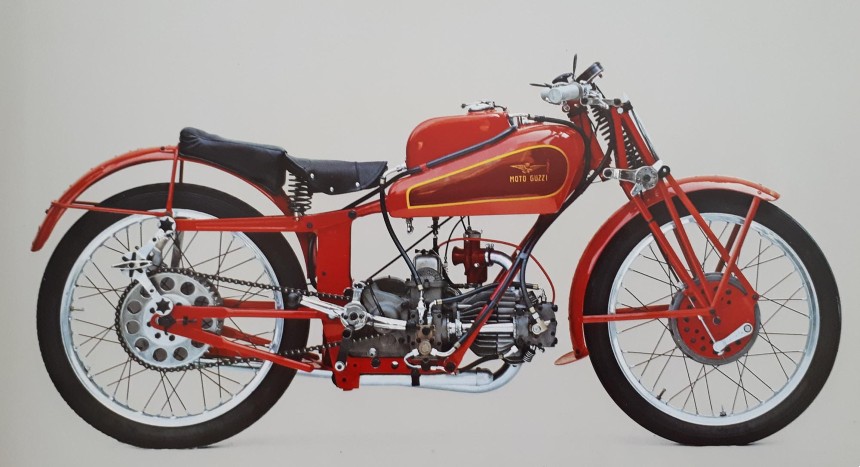 The company quickly built a reputation in motorsport, winning the prestigious ‘Targa Florio’ endurance race around Sicily in 1921 and going on to enjoy considerable success in Grand Prix and TT racing. Ireland’s Stanley Woods won two Isle of Man TTs on Moto Guzzis in 1935, while Italy’s Bruno Ruffo was the inaugural 250cc world champion on a Moto Guzzi in 1949.

Racing had always been expected to be a part of Moto Guzzi’s business plan, even after Giovanni Ravelli’s untimely death. Not only did the successes help promote the company, it also gave them an opportunity to develop new technology, something that they were famed for in those pioneering day.

Following World War Two, demand focussed on small and inexpensive machines – with Guzzi producing a number of sub-100cc models. Racing remained a big part of their ethos though, and the post war years saw the introduction of the motorcycling world championships, with classes for 125cc, 250cc, 350cc and 500cc solos – as well as sidecars.

Moto Guzzi would never win the premier class but they were specialists in 250s and 350s, winning the 350 title four years in a row from 1954 to 1957. These single cylinder machines gained an advantage through their streamlined bodywork, known as ‘dustbin’ fairings, which gave good top speeds and improved fuel economy. In the 500cc class, Guzzi dabbled with a four-cylinder engine before creating one of its most iconic designs – the legendary V8. 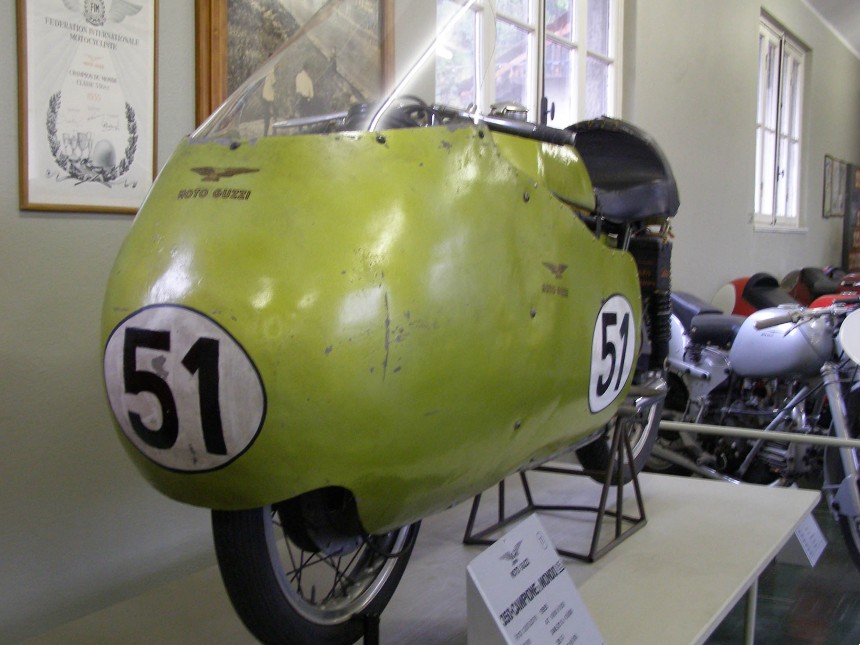 The Otto Cilindri was a remarkable feat of engineering. Introduced in 1955, it was reputed to produce around 78bhp (at the time when the title winning Gileras made around 70bhp) but the engine was too advanced for the contemporary chassis, brakes and tyres. It was to prove impossible for even the best riders to tame and, when dustbin fairings were outlawed in 1957, Moto Guzzi (along with most other Italian manufacturers) withdrew from competition without fully developing the V8.

The 1960s were a particularly tough time for the company. The founders had all passed away and by 1964 the company went into receivership and state ownership.
Even so, it was in 1967 that Moto Guzzi introduced the design with which it is synonymous today. The V7 was powered by a 704cc V-twin which was mounted across the frame. This basic engine design has been part of the Moto Guzzi range ever since and, today, all Guzzis run this same configuration, all air cooled and all with a shaft final drive. Its success helped keep the company afloat and defined what the brand would become.

By 1973, the company was under the stewardship of Argentinean industrialist Alejandro De Tomaso, who had competed in Formula One car racing and also owned an eponymously named supercar company. 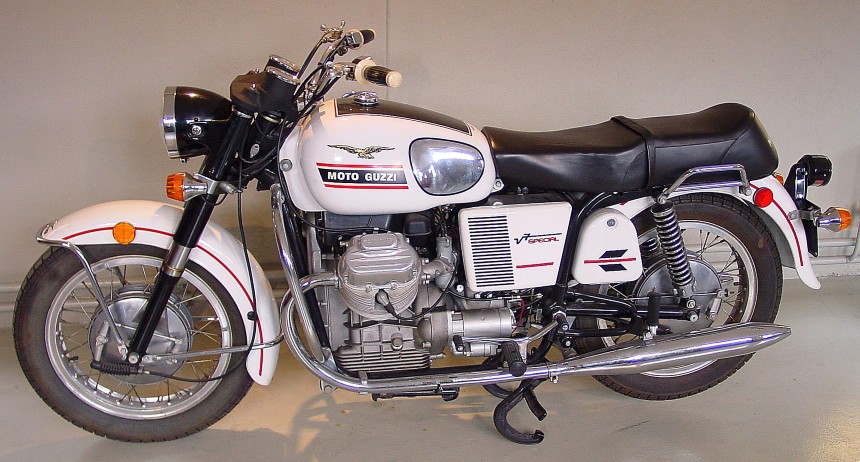 As with all Italian motorcycle manufacturers, Moto Guzzi suffered throughout the 1970s – gaining a reputation for poor reliability and iffy build quality – but there were still some classic designs, most notably the Le Mans sports bike of 1976 and the long running California cruiser, which was introduced in 1971 and went on to be used by a number of police departments around the world. De Tomaso (who also owned Maserati) acquired Benelli at the same time as Moto Guzzi and the two brands shared some technologies.

A number of Benellis were rebadged as Moto Guzzi, including small two strokes and mid-range four-cylinder machines. Benelli ended production in 1988 and in 2000 the Moto Guzzi brand was sold to Aprilia, an arrangement that lasted four years before Piaggio came in to buy Aprilia’s portfolio of companies.

In almost two decades of Piaggio ownership, Moto Guzzi has appeared to go from strength to strength. Still headquartered in Mandello del Lario, the brand has been able to focus on building more traditional machines around the classic style, but completely modern, 850cc V-twin engine, while other divisions within the group are able to focus on other sectors – with Vespa building the trendy classic scooters, Aprilia developing the modern, sporty, machines and Piaggio putting its name on the more utilitarian scooters. 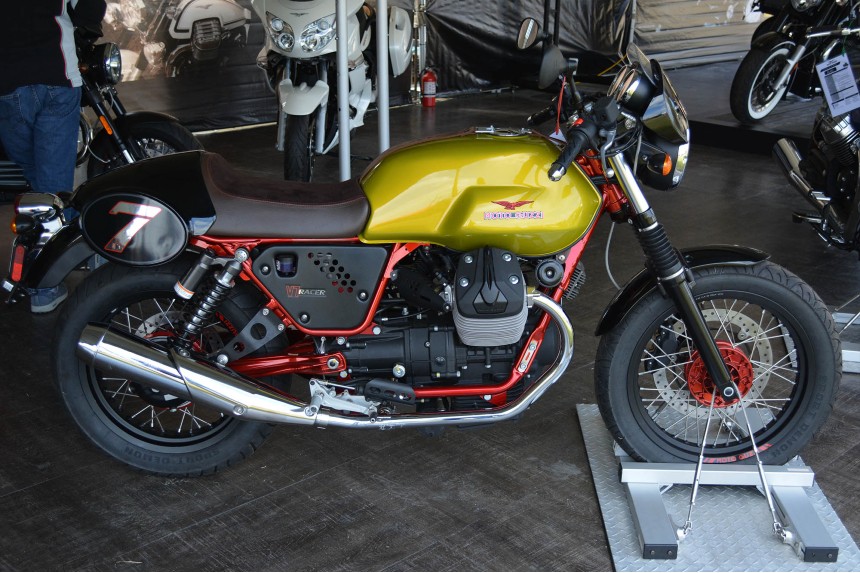 Today’s range revolves around the revived V7, a range of retro roadsters in the vein of the Triumph Bonneville, the V9 cruiser range and the quirky V85 TT adventure tourer. At 100 years young, the Moto Guzzi brand has never been in such good shape!