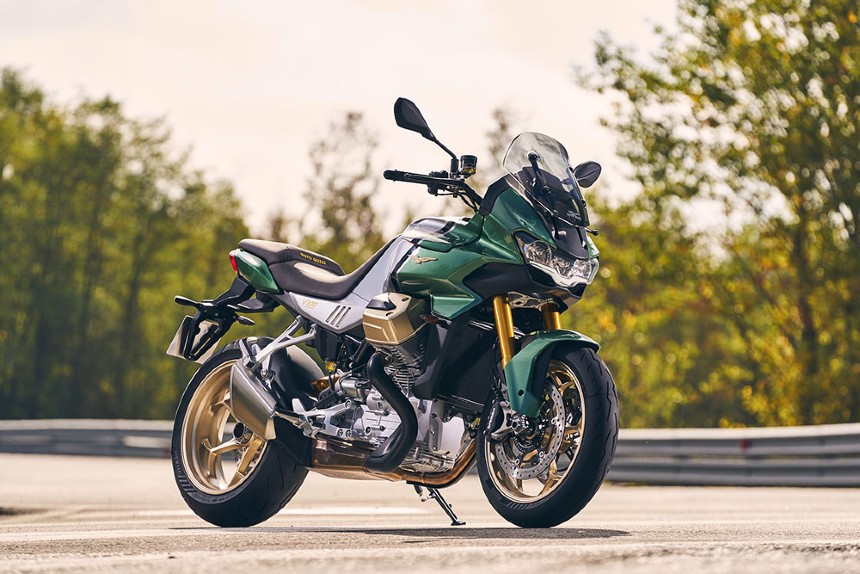 By now, we all know how important aerodynamics are, whether you’re aiming for the best fuel efficiency on a touring machine, or the most performance from a sportsbike. And now? Well it looks like Moto Guzzi have taken things up a notch, with some adaptive aerodynamics.

The classic Italian brand unveiled the high-tech new machine at EICMA, Milan’s mega motorcycle show, and even forgetting the posh aerodynamics for a moment, the V100 Mandello looks set to be a real treat.

It’s the first ‘Guzzi to be powered by their new, ‘Compact Block’ 1042cc engine, which has been designed to be as light and as small as possible – a whopping 103mm shorter than the V85 TT’s ‘Small Block’ engine. This means that in terms of figures, the V100 Mandello will produce 115bhp and 105 Nm torque and carries a 17.5 litre fuel tank.

Electronically, the V100 Mandello comes equipped with a six-axis IMU and a powerful Marelli ECU, which not only powers a whole host of rider aids that cover everything from traction control, ABS and engine braking, but also the riding modes, which actually alter not just the ride, but the aerodynamics too.

In fact, dependant on the riding mode and the speed, the deflectors on the fuel tank can be raised to reduce air pressure on the rider by 22%, which should make a huge difference when it comes to creating a comfortable ride, in all weathers at all speeds. This is all then housed in steel tube frame, which is not only produced for cornering feedback, but to offer a relaxed riding position, for both a rider and a pillion.

While it’s something of a surprise that Piaggio has chosen its most traditional brand to launch such cutting edge technology, it is worth remembering that Moto Guzzi was at the bleeding edge of motorcycle aerodynamics in the 1950s, when dustbin fairings graced their very fast Grand Prix racing machines.

For those interested in buying a Mandello in 2022, it will be available in two versions, one standard and a specced up version featuring Öhlins Smart EC 2.0 semi-active suspension, quick shifter, heated grips and Moto Guzzi’s MIA multimedia platform. There’s no word on price or availability just yet though.