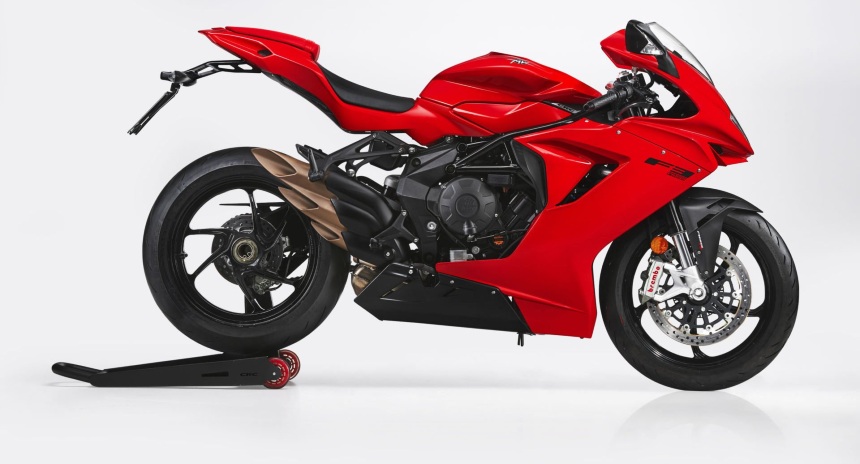 High end Italian superbike brand MV Agusta has announced it will be making a ‘budget’ version of its middleweight F3 sports bike, called the F3 Rosso.

The F3 was originally launched in 2012, as a three-cylinder 675cc supersport bike in the vein of the Triumph Daytona 675. Offered as a longer-stroke 800cc version from the following year, the elegant F3 has been in the range ever since – albeit with a number of updates over the years.

With an iconic name on the tank and dripping with top end components, the F3 has always commanded a price premium over more mainstream middleweights, however MV’s recent adoption of the Rosso (Italian for red) model line for the Brutale and Dragster has seen a new and more affordable range of bikes emerge.

While the spec may be entry level by MV standards, it’s still packed with the latest technology. In line with the changes made to the mechanically similar, but naked, Brutale and Dragster models the engine has been treated to a host of internal changes to meet the latest Euro5 emissions laws. It still makes a claimed 147bhp which, combined with the three-cylinder configuration’s renowned torque characteristics, should provide a very usable package that’s more flexible than a peaky 600cc four but much less intimidating than a full on 200bhp superbike.

But it’s not just the engine that’s been given a makeover. While they’ve been at it, the Russian-owned Italian brand has taken the opportunity to bring in a raft of other changes. The LED dash found on the old base model F3 has been upgraded to a spangly new 5.5” TFT item, while the electronics get a major overhaul with a new IMU controlling the rider aids, including cornering ABS, improved traction control and a wheelie control system that allows the rider to set the height of the front wheel lift. The chassis has also been modified for increased rigidity through revised bracing.

No UK price has been announced for the F3 Rosso, however it is expected to come in at just under £15,000, putting it in line with the Ducati Panigale V2. We’re also expecting it to be joined at some stage by an ‘RR’ model with higher spec suspension and possibly an increased power output.