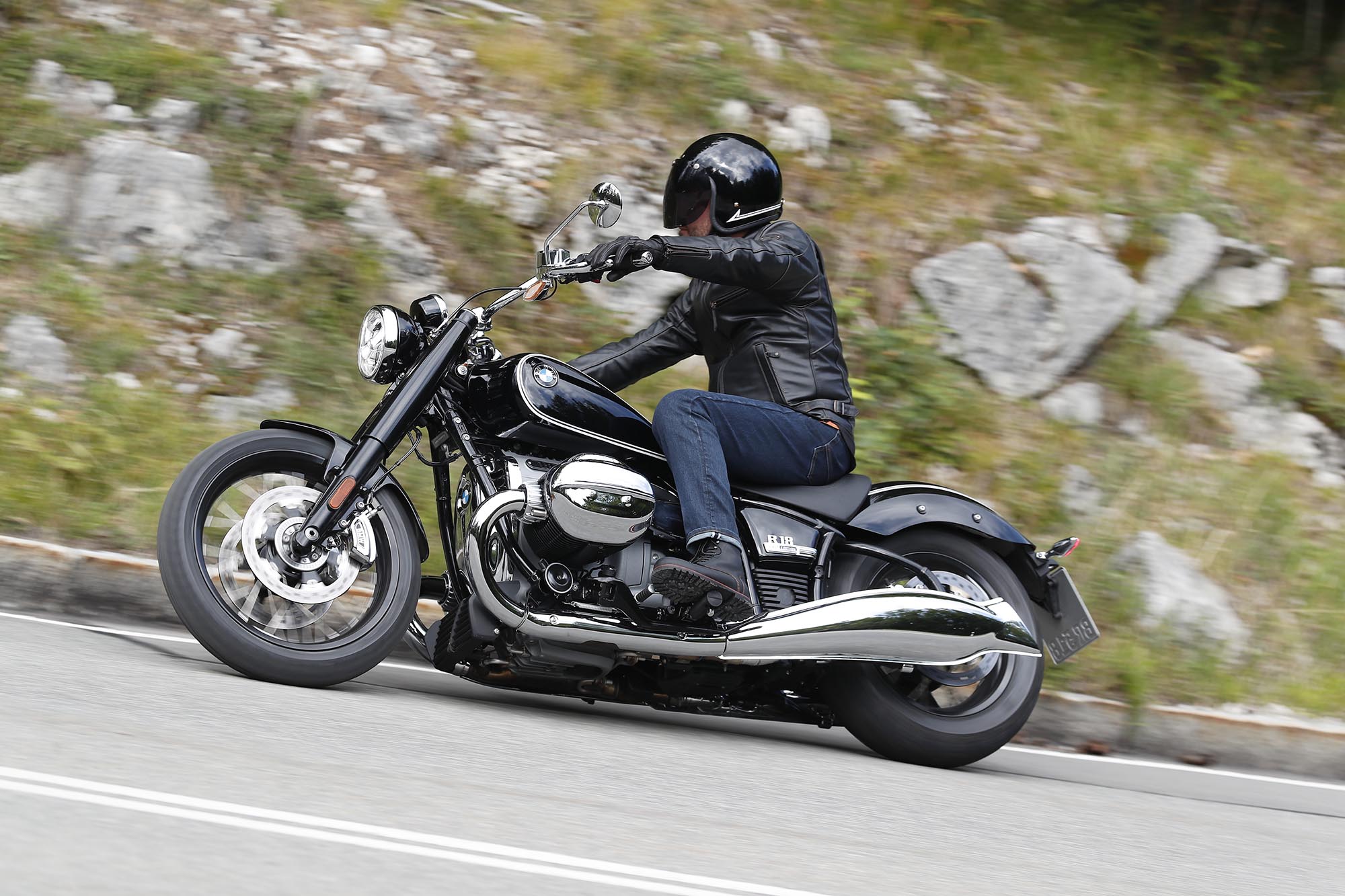 At the height of the pandemic, BMW dropped its all-new R18 – an 1800cc cruiser-cum-roadster that leans heavily on the German brand’s heritage and which they hope will snatch some lucrative sales from the likes of Harley-Davidson and Indian. What’s it like to ride? We got the chance to go to Germany and rack up some miles in the sun and rain!

The new R18 is BMW’s first serious cruiser since the long forgotten R1200C of 1997. It’s also the largest capacity boxer engined bike in production with 1802ccs shared between the two pistons, slugging it out across the frame. BMW want you to make this bike your own by delving into the large official accessories catalogue and modify their bikes in the same way that people continue to do with the RNineT, and of course the R18 is also a serious swipe at Harley-Davidson’s market share in the cruiser sector.

If you’ve ever ridden a BMW boxer you’ll be familiar with that strange rocking thing that they do when you rev them in neutral. The pistons move left to right rather than up and down and boxer motors rock between your knees when you blip the gas. It’s obvious on a big GS, but on this R18 it’s even more pronounced. If the engine layout is new to you, don’t be tempted to get off and get the bus home, they all do that and it gives bucketloads of character. On the R18 it’s magnified because of the size of those pistons. Once you’re moving, the feeling all but disappears and is replaced by smooth, torque filled drive from almost zero rpm.

Our test ride began in central Munich and the R18 has great slow speed manners for a bike as long as it is. Visibility over the top of cars in front is compromised slightly because of that low seat height, but it’s not so bad that you feel like you can’t be seen by car drivers. As standard, the pegs aren’t fully feet forward like other cruisers, rather mid mounted like a traditional roadster.

When the traffic released its grip on us, we were able to shift up a few gears and cruised along the dual carriageway network out of the city towards the mountains. I was picking up on some quite heavy vibrations through the pegs and bars and began to wonder if BMW had in fact built a terrible cruiser. My feet started feeling numb, surely this couldn’t be right?

It turned out I was riding the bike all wrong. It felt like cruising speed in third, but that speed turned out to be cruising speed for fourth or fifth gear. Once I’d shifted up a gear, the vibrations immediately disappeared. This is an important part of the ride that you need to be aware of. Large capacity motors of any configuration take some getting used to and the 1800cc boxer motor is no exception. There was no need to shift down when I wanted shove as there is so much torque available that the R18 just digs in and drives. Number crunchers will be pleased to hear that BMW claim there’s 116lb-ft of torque available at 3000rpm, what’s more telling is that there’s 90lb-ft available from just 2500.

By the time we made it to the twisty section of our ride, the rain was there to meet us. Not just a passing shower either, as it properly lashed it down. I love a cruiser and the idea of riding slow enough to take in the scenery appeals to me. My daydreams of doing just this rarely involve having to pull over and pull waterproofs on, but that’s what we did. I didn’t bother with Rain mode and instead left it in Roll. Rock mode was waiting for me and dry roads and once I’d stopped laughing at the idea that someone decided to call the riding modes Rain, Rock and Roll!

The R18 behaved very well, riding in the wet in ‘Roll’ mode. Long low bikes generally behave a lot better than you think, and this one has great road manners. The forks are by Showa and the shock is a Sachs unit. The ride is on the firm side of comfortable which works on smooth roads and pays dividends when it comes to changing direction. The pegs will deck out with a satisfying shower of sparks but doesn’t represent real world riding.

Long and low cruisers used to have this weird hinged in the middle feeling where the back isn’t talking to the front in longer or faster corners. That’s not the case with the R18 and I was able to adjust my line with the throttle or the brakes when I needed to without the thing turning into a wobbly mess.

I think the standard seat is too firm for me. As you would expect in the cruiser sector, there are options aplenty to choose from and BMW’s work with Mustang seats means there are better looking and no doubt more comfortable options available too. If you end up with an aching bum on the R18 you’ll discover (like I did) that standing up on the pegs and taking a leg stretch is very easy peasy as the thing is so stable and the bars are perfect for pulling yourself up on while you ride along. I loved the shape of the tank and how it didn’t intrude on my comfort. I even grew to like the stock exhausts which have been fairly divisive since this bike broke cover. If I was speccing one of these for myself, I’d chuck the stock indicators in the bin, would fit a different seat and would stretch for a louder exhaust.

The R18 is a great bike. It does all of the things that cruisers need to be good at, with the added twist of that massive boxer motor and a bloodline that really does reach back into the archives in Munich. It’s an impressive motorcycle that I would seriously consider if I were in the market for sub £20k relaxed riding. BMW has established dealer networks and very loyal customers that are used to paying strong money for a bike, as well as perhaps having a level of expectation from their ownership experience that’s maybe a cut above the competition. The BMW R18 is a very clever piece of kit that’s perfectly timed for delivery into a market where Harley-Davidson are facing genuine challenges internally as well as on the showroom floor. If you’ve ridden anything from BMW recently you’ll know that they have pretty much forgotten how to make boring bikes. This R18 is no exception, one of the few good things to have come out of 2020!