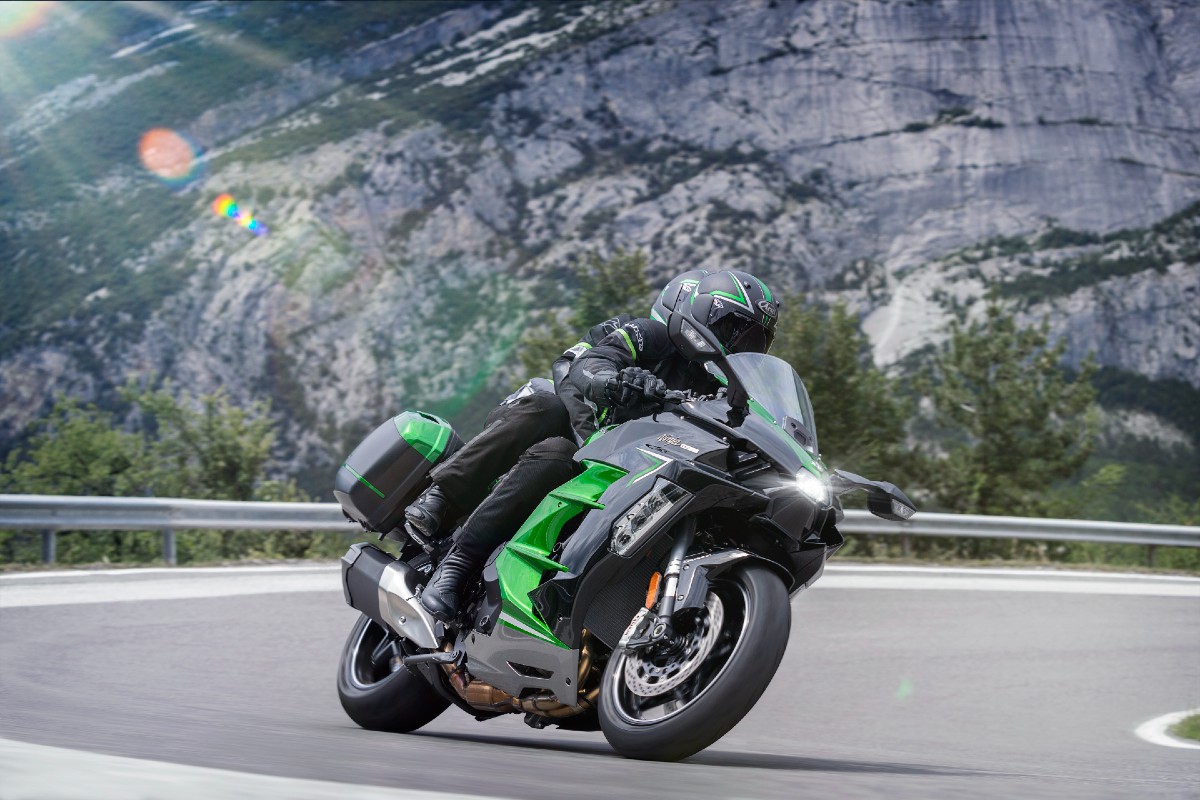 Sports tourers should be the perfect blend of motorcycle for me. Something that offers a decent amount of performance and handling, while also giving ample levels of comfort, allowing you to tackle anything from a spirited ride to a monster road trip is just my kind of thing. And at the very top of the sports touring tree is this, Kawasaki’s updated-for-2002, supercharged, H2 SX SE.


We tested the Tourer model, which comes complete with a set of hard panniers, and that will set you back £25,329. Admittedly you get Kawasaki’s 998cc supercharged engine, offering up an impressive 198bhp and 137Nm torque, wrapped up in a steel trellis frame. Electronics are at the top end of the scale too, with a big, 6.5” TFT dash powering a raft of rider aids including cornering ABS and traction control, rider modes (including a reduced power rain mode) electronically damped Skyhook suspension and, new for 2022, the introduction of adaptive cruise control, blind spot detection and a collision warning system. That puts the H2 SX SE at the forefront of today’s tech. Keeping the numbers going, it also comes equipped with a 19 litre fuel tank and two, 28 litre panniers on this Touring version. It tips the scales at 267kg ready to roll. But is it the ultimate in sports touring?

Whether it was the original winged H2, the naked Z H2 or this, the H2 SX, Kawasaki’s supercharged stallions have always split opinions when it comes to their appearance – yet for me, I’ve always had a soft spot for the big, bulky looking beasts. The latest generation is no exception. It’s got a real presence about it and is finished with some of the nicest paint that you will see on any current production machine today. Getting a bit closer, there are a few imperfections; the welding on a few bits such as the centre stand isn’t the tidiest I’ve ever seen, and in the cockpit some of the wiring could’ve been tidied up ever so slightly too. It is a surprisingly low machine to straddle and well balanced at a standstill.

The way that motor pulls at the top end really is incredible; it’s so smooth and effortless yet gets to ballistic speeds with the urgency of a superbike. When the tacho hits 6,000rpm the H2 SX delivers probably the smoothest blast of power I’ve ever felt. Close the throttle and the supercharger tweets out an incredibly addictive chirp. It’s not all amazing though, as it feels surprisingly flat below that 6k mark. It’s also worth noting that the gearbox isn’t the smoothest offering on the market and, despite being equipped with a quickshifter and autoblipper, I had to be really positive on the gearchanges both up and down the box.

As far as the handling goes, it’s by no means a slug if you’re after a sporty ride. Okay, it’s not particularly agile through the tight and twisty stuff, but show the big Kawasaki some fast and flowing corners and it is incredibly stable, and far more responsive than I imagined.

If you want to tackle big miles, the H2 SX is not the most comfortable machine out there. Not only is the wind protection fairly poor I also found that I had quite a lot of weight on my wrists, combined with a fairly compact distance between the seat and my pegs. The seat was on the fir side too, and I found myself wriggling around and dangling my legs after around 150 miles.

I made a point of testing the adaptive cruise control, blind spot detection and collision warning, which are key new features for 2022. I absolutely love the blind spot detection feature and it works really nicely, the inbuilt signal on the mirror lighting up if there’s an object in the danger zone. I was less keen on the adaptive cruise control, which felt very sensitive. Don’t get me wrong, it’s a great feature but a little bit less in terms of sensitivity would’ve gone a long way for me. As far as the collision warning goes, the less said about that the better! It was flashing like crazy as I filtered through traffic and, if you’re not looking at where you’re going ahead, why on earth would you notice a flashing orange light on the dash? I’m sure some will appreciate it, but it doesn’t really work for me.

There’s no denying that the H2 SX SE is a special bit of a kit. A supercharged sports tourer, offering up almost 200bhp? Yeah, it still sounds bonkers as a write it now. Okay, it’s not the most comfortable machine on this planet nor is it the most practical or even the cheapest, but it does have its place. It’s a perfect step if you’ve been a sportsbike-nut all of your life and still want something that’s a bit mental and exciting, but with a touch of comfort and practicality thrown in. It didn’t blow my socks off in terms of its touring capabilities, but it has one heck of an engine and I’m glad bikes like this still leave the production line…