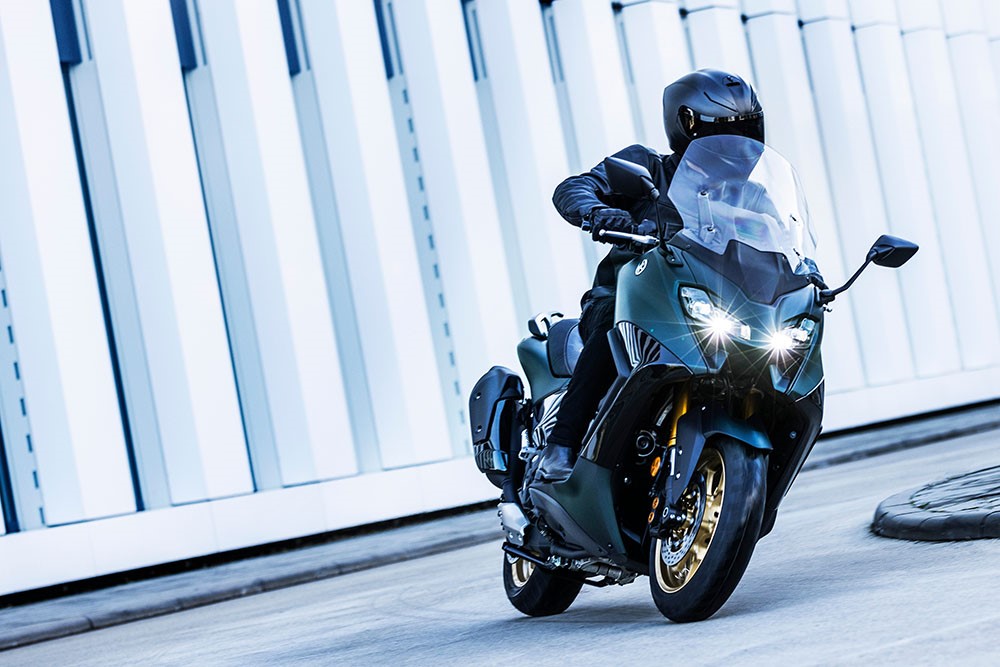 It really is hard to understate just how popular Yamaha’s TMAX is on the continent. Introduced over 20 years ago, it’s an almost forgotten about footnote in Yamaha’s UK range, yet it is Europe’s best-selling sports scooter, and for good reason too. Not only is it functional, fashionable and comfortable, but it’s fairly fast too, blurring the lines between motorcycle and maxi-scooter. If you go to any big city in Europe, you’ll be constantly overtaken by these things, ridden by everyone from pensioners popping out for a shop, to businessmen on their way to a meeting. And that’s also for a good reason; although the TMAX is a scooter in its appearance, glancing at its features and the spec sheet you soon realise that this certainly isn’t a glorified moped.

The latest TMAX is powered by a fairly hefty 562cc parallel twin, offering up just shy of 47bhp, with 55Nm torque. It’s got a scooter style twist and go transmission, with all that power and torque sent to the rear wheel via a belt drive system. And you can ride it on an A2 licence.

It’s built to be incredibly practical, first and foremost, and not only do you get a big 15 litre fuel tank, a good amount of under seat storage and a centre stand which locks as an anti-theft device, but you also get cruise control, heated grips and seat, an electrically adjustable screen, keyless ignition and, for 2022, a large 7” colour TFT dash, which will connect to your smartphone and also has a connectivity option for full Garmin navigation (although you’ll need to pay extra for the app). For this year, Yamaha have also given the TMAX a sportier facelift, a slightly sharper rider position, some uprated suspension, lighter wheels and newer, model-specific Bridgestone rubber too, among some tweaks to the windscreen and the backrest. 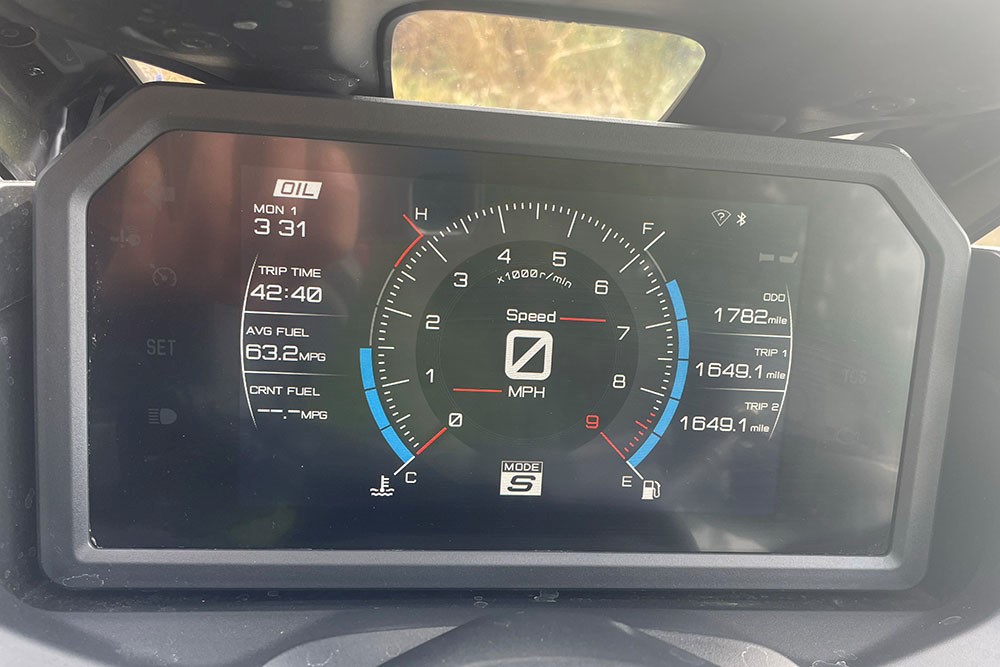 But then again, all of this does come at a cost – and a pretty big one at that. As maxi-scooters are nowhere near as popular in the UK as they are in the rest of Europe, we only get the highest spec of the TMAX, which will set you back £12,700, where other countries also get a base model. So, can you really justify that amount of cash for what seems like a scooter? We took one for a spin to find out…

There’s no denying that the TMAX presents itself as a monster of a machine, looking not only incredibly aggressive for a big scoot, but also suitably premium too. From the swingarm to the projected headlight, everything is exactly as smart as you’d expect for something costing almost £13k. You can feel the quality when that 7” TFT dash fires into life for the first time, offering up just about everything you need to know, want to know and even stuff you didn’t even know you needed know – and you can adjust the display to suit your preferences too. It’s worth noting that the underseat storage is more than big enough for a helmet or a few bags of shopping and, in today’s day and age of bike theft, the addition of the locking centre stand is a really nice addition as well. The handbrake is also a brilliant feature I wish came on more scooters and automatic motorbikes. It works wonders when you stick it on the side stand on an incline.

Although the TMAX appears to be a big beast, thanks to the relatively low 800mm seat height reaching the ground is an easy affair. Sure, it does weigh in at a fairly hefty 220kg, but even so it feels well balanced with the weight sitting low down, making it easy to manoeuvre at slow speeds and very confidence inspiring at traffic speeds. Don’t get me wrong, it’s still a long machine with a wheelbase of 1575mm (for comparison, the best selling 125cc NMAX scooter sits at 1340mm), but even so it’s more than agile enough to dart in and out of traffic, and filter with ease.

And that’s also helped by the urgency of that parallel twin engine. Yes, with its relatively modest figures and lack of a manual clutch and gears, it’s not going to convince the absolute hardcore bikers among us, but even so it has an incredible amount of punch up to about 40mph and will happily take you quite far north of the 70mph mark – in fact, triple figures are easily in question on the TMAX. The engine is also incredibly quiet, and will happily burble along at motorway speeds, which is made even better by the intuitive and easy cruise control system. As a left of centre touring choice, the TMAX certainly has some merit.

Talking of which, if you are up for longer journeys then I have to say that the TMAX is an incredibly comfortable machine, and with the size of the seat, adjustable back rest and spacious footboards, I do genuinely feel like this a machine that would accommodate just about every size and shape of rider. Being on the smaller side of the spectrum, I had no issue at all with the lowish screen and experienced very little in terms of buffeting, and although I didn’t ride with a pillion, I did sit on the back and the position and seating definitely feels luxurious, with some really big grab handles to hold on to. The heated grips and heated seat are also really easy to use, and offer a generous amount of warmth. 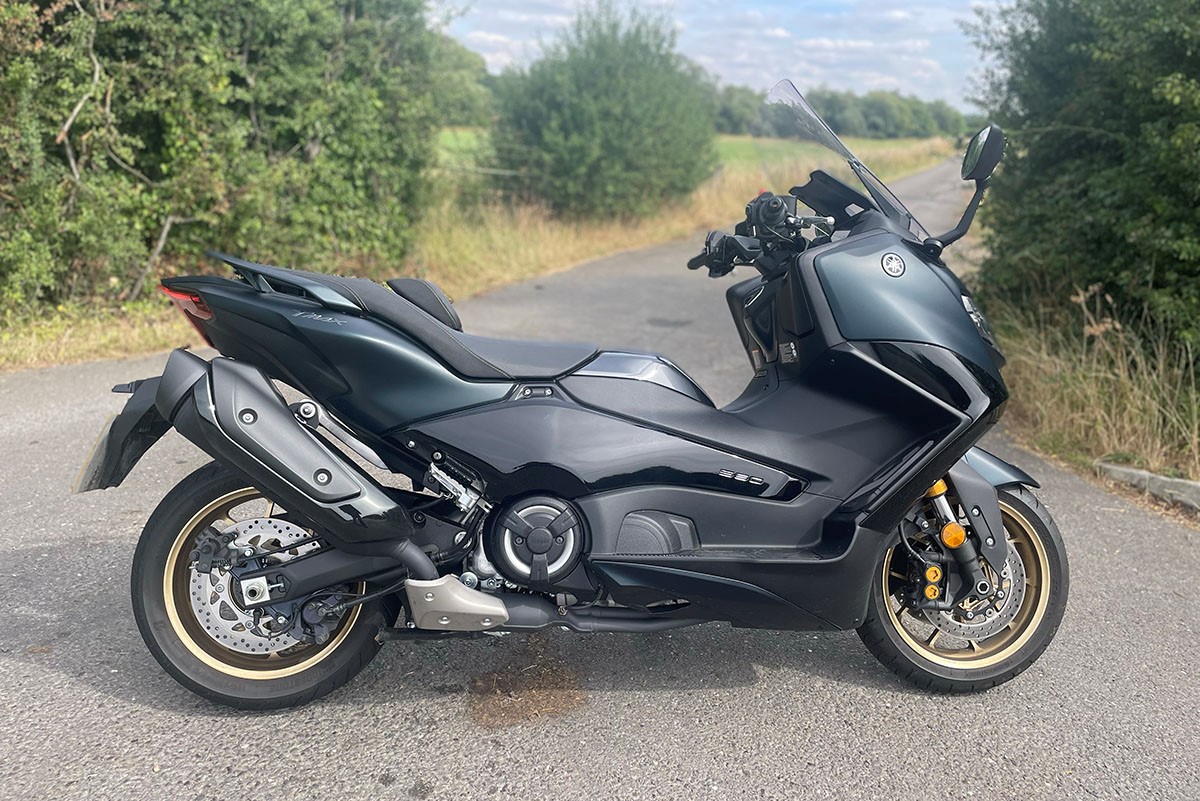 Even when riding the TMAX a little bit harder, it is a surprisingly impressive bit of kit. Although I haven’t done enough mileage on the previous iteration to compare, the newly uprated suspension and tyres work nicely with those lighter wheels, providing more fun than I was expecting on twisty B-roads. The only issues I found was in terms of ground clearance when riding it more like a regular motorbike, and the fact that even though those brakes are fairly high spec they aren’t the very sharpest in terms of stopping power, especially when there’s over 220kg of machinery to stop. On hard braking the ABS does make itself known quite regularly as well. But for a maxi-scoot? It far exceeds in terms of its abilities in terms of its sporty side.

Overall, there’s no denying that the TMAX is a cracking bit of kit. In many ways it is neither a scooter nor a fully blown motorcycle; it’s a comfortable, capable combination of the two that oozes both style and substance in equal measures. Offering an abundance of storage, a poised and easy ride in town, not to mention the ability to munch miles is something that little machinery can do so well. Even though it is a costly beast, it does feel like the end product warrants the investment. Sure, you could pick up a 125cc scoot for under £4,000, but it’s a whole different world to what a machine like the TMAX offers; like comparing chalk and cheese. If you’re intrigued but aren’t sold on the idea? I dare you to take one for a test ride.