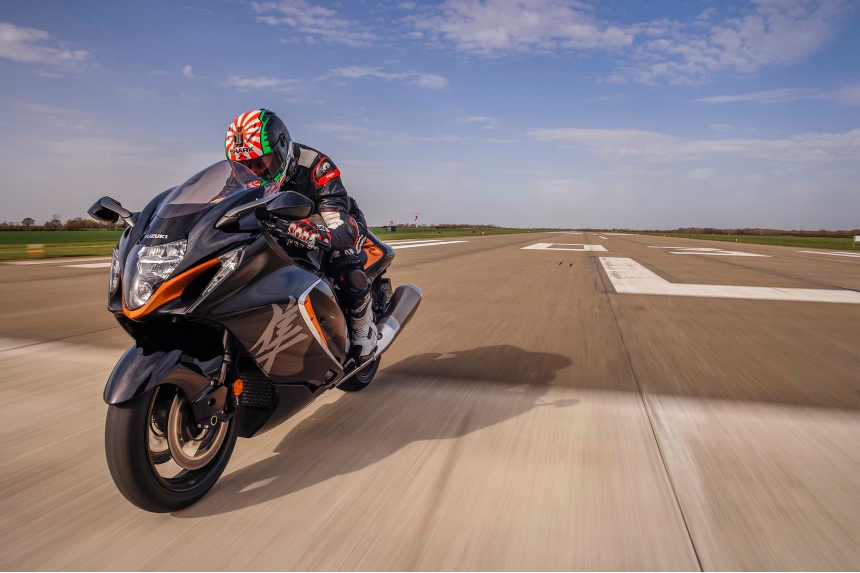 After years of rumour and speculation, Suzuki’s third-generation Hayabusa is finally here. So how different is it? Well, it features a host of changes, with 550 new components in total, but like many new Suzukis launched in recent years, under its new skin the Busa’s actually more a case of evolution rather than revolution. One key development might even disappoint some fans but all I’ll say is, after a 170-mile road ride along familiar UK roads, followed by several high-speed runs along an aircraft runaway, there’s no doubt the new Hayabusa is hugely impressive, and clearly the very best one yet.

They’ve always been fast, if not pretty

I’ve had the good fortune to have spent lots of miles on lots of ‘Busas over the years, and have always found riding them to be an emotional experience. That was certainly true when I tested the original model at its road and track launch in Spain. Back in 1999 nothing could touch the Suzuki’s performance, its 173bhp engine producing utterly staggering performance. Opinions were divided over its aero-influenced styling, but it still went on to be a big hit, especially with the drag-race fraternity. Similar mixed views greeted the arrival of the improved second incarnation of the bike in 2008. Few could fault the new 194bhp Hayabusa’s dynamics, but again its looks brought questions from many. Even so, by then it had established a cult following, especially in the USA. 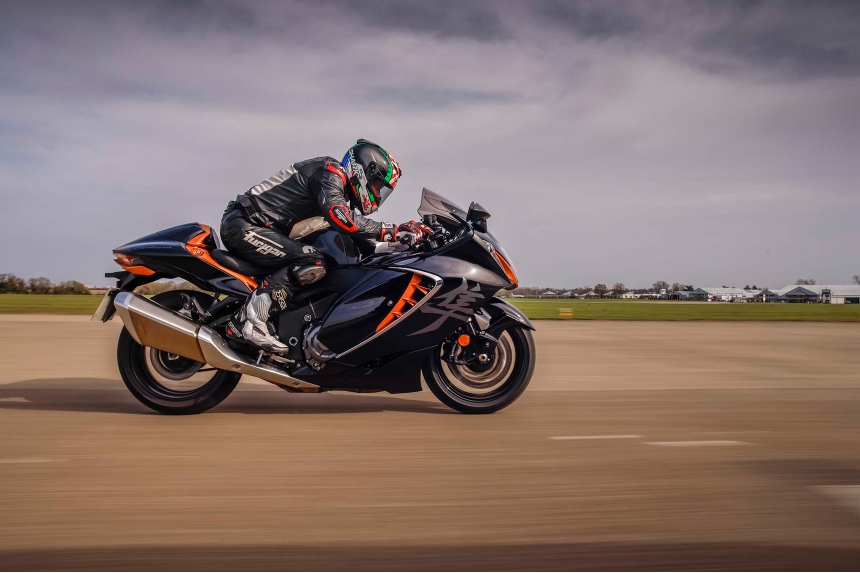 Back to the UK now, and back to the latest version of the Suzuki icon, the story of development has a similar ring to it, though with the exception of one fundamental change. The 2021 bike’s engine, based heavily on the previous one, has 7bhp less peak power, ‘only’ registering a claimed 187bhp. That might offend the purists a little, but as I discovered on my ride, that ‘inferiority’ is totally academic.

Believe me, when you open the throttle on this Hayabusa the level of forward thrust ranges from the remarkable, to the absolutely astonishing. It’s quite important to qualify this immense acceleration with more detail though, as it differs appreciably from a typical four-cylinder superbike, even if all of them actually make more peak power than the new ‘Busa’s motor. What makes this Suzuki’s engine stand out is the deceptively strong tsunami of massive, never-ending torque, which emphasises the insignificance of things like needing the correct revs or gear choice to gain speed. The beautifully smooth powerplant delivers an eye-opening rise in pace so incredibly easily and calmly by using the throttle alone, regardless on the selected gear or engine speed. Even in top, once the wheels are rolling, the new speedo’s needle sweeps round its face at an extraordinary pace when you feed it more fuel and air. 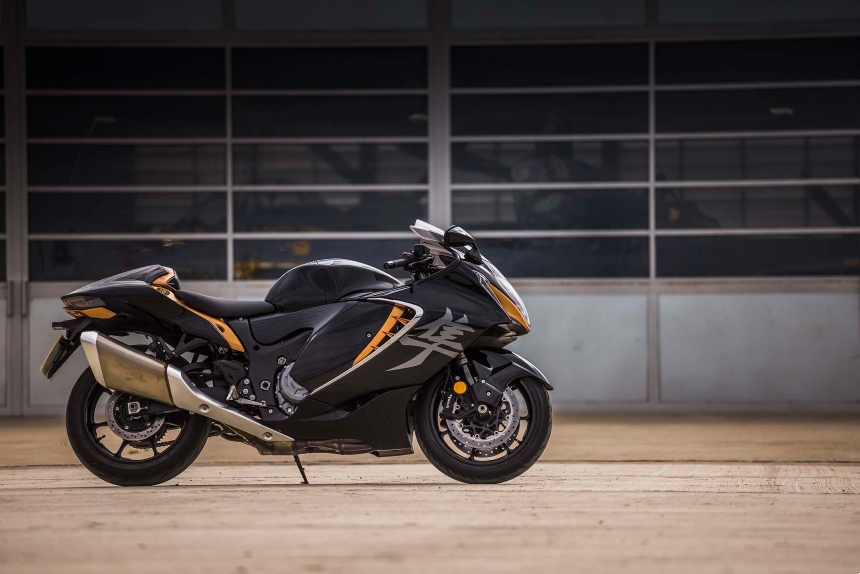 More where you need it most

Extra midrange power plays a big part in the effortless-feeling and highly useful acceleration. The boost comes from a combination of parts like the new airbox, revised inlet tracts, 1mm smaller throttle bodies, reprofiled cams, fuel injection mods, redesigned combustion chambers, and new exhaust system. Given the manufacturers’ agreement to limit top speeds to 186mph, and restrictions demanded by Euro5 emissions legislation, Suzuki’s more realistic and economic decision to retune the engine this way appears to be a wise move. Besides 187bhp is hardly likely to produce disappointing top end performance is it now? Only those who like to boast down the pub about big numbers are likely to feel put out.

No need to be concerned

Now before any of you worry that the Hayabusa sounds like some crazy unmanageable beast, fear not. With one of the most linear deliveries possible, the engine is really easy to control. All you need is lots of discipline to avoid using too much of what it has!

Also assisting the overall safety is the very competent, largely unaltered chassis and new, easy to access, electronics package. There’s no doubting the Suzuki’s no lightweight, tipping the scales at a hefty 264kg ready to ride. However, the excellent balance of the speedy sports tourer is apparent from the off. Nestled in the low seat, with feet firmly planted on the fairly high footrests, walking pace movements round town feel easy to execute, and even though its weight and length are appreciable round very tight corners, the Suzuki can’t be described at ponderous. At more spirited pace, rolling the bike into and out of corners feels sweet and predicable. Better still, the super planted, rock steady dependability of the Busa’s handling does wonders for your confidence. You really do feel, however hard you’re riding and regardless of the road quality, that the wheels will always stay in line. Add a revised suspension package that offers commendable ride quality and control, bigger brakes that repeatedly do their job really well even when used hard, and lovely accurate neutral steering, and you soon gain faith in pushing the envelope a bit more. The overall solidity of the Suzuki is really welcome, and constantly encouraging. 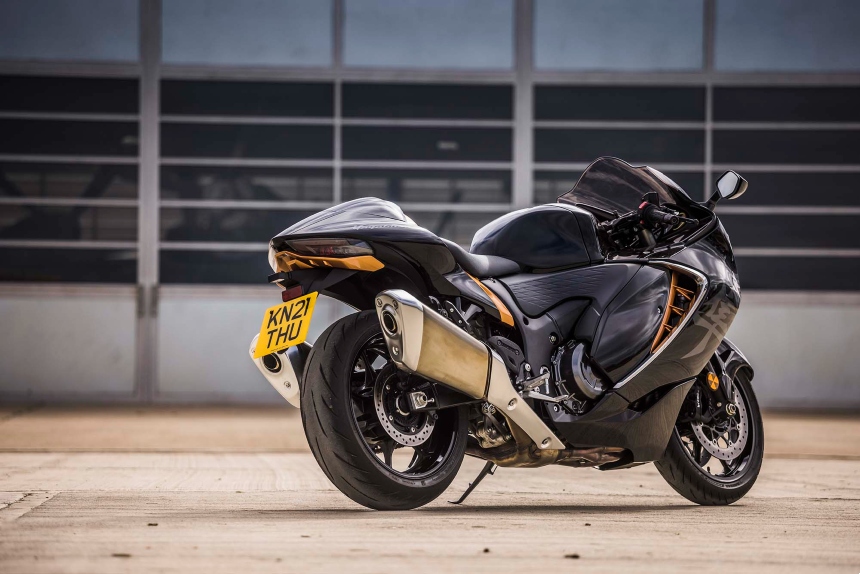 There’s no way to legally find out what the Hayabusa can do on British roads, but some of those features definitely proved useful when dealing with the near flat-out speed runs Suzuki arranged for us at a Northamptonshire runway. Launching the powerful bike was safely kept in check with the launch control and anti-wheelie systems engaged, and after very rapidly getting up to an indicated 170mph, the appreciably improved Brembo brakes hauled up the heavy ‘Busa with impressive ease. Braking has been a weaker point on both previous versions of the Suzuki, but on this one there’s zero room for criticism.

Still open to debate though are the bike’s looks. Shaped more to cut through the air at very high speed more than turn heads, there’s still a bulky overall appearance to split opinion. The restyle has given it sharper, more aggressive lines which overall makes the Suzuki a lot more attractive than the previous model. Only the massive twin end cans spoil the aesthetics for me, though an aftermarket can would soon sort that. No doubt the shortened fuel range, courtesy of a 20 litre tank (a litre less than before) and slightly higher Euro5 dictated fuel consumption, could displease some too. 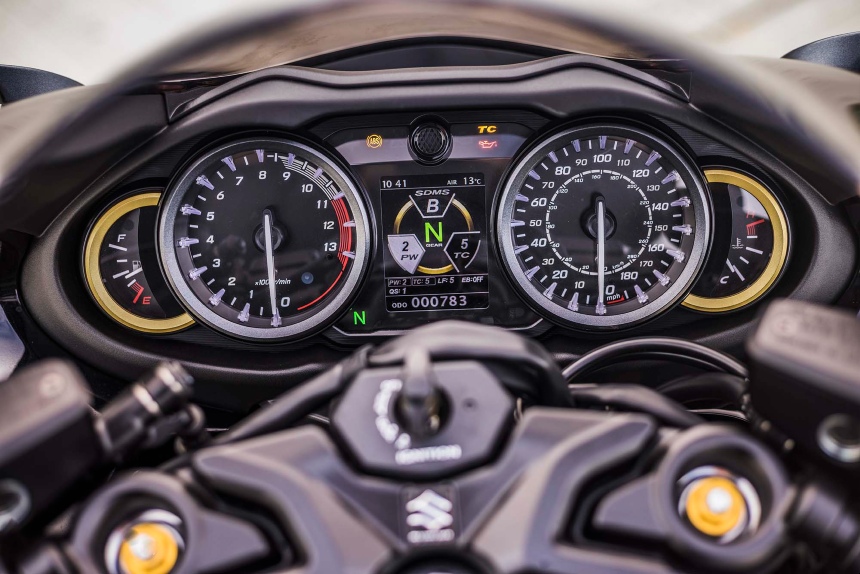 A very good day at the office

As I expected, riding the new Hayabusa turned out to be an emotional event. Overall, it’s more versatile than you might expect as my comfortable 170-mile journey through towns, along dual carriageways, winding backroads and down the airstrip proved. Ridden harder, its ability to instantly and significantly raise the pace so easily is jaw-dropping. In this era of ever-tightening legislation and PC attitudes, I’m sure it won’t be long before bikes like the ‘Busa just won’t be allowed. Anyone who manages to get one before that final curtain falls should count themselves lucky. There is, quite simply, nothing like the legendary Hayabusa.