Insidebikes guide to… locks and chains for your motorbike

Motorcycle theft is a real problem in the UK but as motorcyclists we can play our part in making life as difficult as possible for the bad guys by making our bikes as secure as possible.

There are numerous security devices on the markets, such as alarms and secure bike sheds, as well as technology to help find your vehicle should it be stolen, like trackers and forensic coding systems which indelibly marks a motorcycle’s components to make them easy to trace and difficult to sell on for spares.

But despite these new technologies, the first line of defence is almost always a good quality lock. Few, if any, locks or chains are unbreakable for the determined thief but they will certainly make their job more difficult and will deter many of the more opportunistic villains. Combined with a humble bike cover, the lock should be an essential tool in every motorcyclist’s armoury.

However, the number of options available can be bewildering and not all locks are created equally, which is why we have written this handy guide to the different types of locks you can use to secure your motorcycle or scooter.

Cable locks are compact and easy to carry around, however they’re also pretty weedy and usually easy to cut through for thieves with basic tools, like a small pair of bolt cutters.

Better suited to bicycles than motorbikes, a cheap cable lock might deter a passing chancer, but a prepared thief will be able to cut through it in seconds.

Pros: Light and easy to carry around. Inexpensive.

Cons: Easy to cut through.

Top tip: Lock your bike to an immovable object, such as railings, to stop your bike or scooter simply being carried off and bundled into a van. 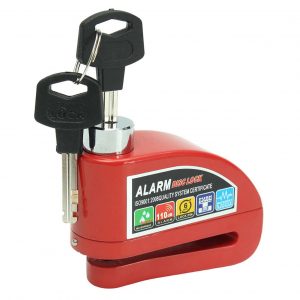 As the name suggests, disc locks are designed specifically for motorcycles with disc brakes. They work by putting a lock through the slots or holes in the disc, immobilising the bike and meaning that it cannot be pushed or ridden away. However, as they don’t lock the bike to anything it won’t stop your bike being lifted up by a gang of thieves and being thrown into the back of a van.

There are two main types of disc lock, ones with a small steel locking pin or ones that are small U lock style shackles. Neither is likely to be as secure as a chunky chain and padlock, but as a secondary device they have their benefits, especially some of the newer ones which have an audible alarm built into them.

On the downside, many a rider has forgotten about their disc lock and tried to ride off with it still attached, causing embarrassing topples as they try to pull away with the front brake locked on.

Cons: Won’t secure your bike to an immovable object. Easy to forget about them and try to ride away with it still on.

The croc lock is a variation on the disc lock theme, but works by clamping the front brake lever on rather than putting a physical lock through the disc.

They’re bright, they’re visible and they’re a great visual deterrent to the passing toe rag, however they’re small and light, which means that it won’t take much of a blow to break the lock. And they won’t stop your bike or scooter being carried away either.

Pros: Light, cheap and easy to use.

Cons: Easily broken by thieves. Can’t be used to lock your vehicle to a solid structure.

The U lock is a classic bike lock design. These two part locks feature a ‘U’ shaped shackle, which fits into its dedicated lock. The design means that it can be put through the bike’s wheel, to work similar to a disc lock, although securing the bike to railings and the like can be tricky unless you’re able to park really close to them.

Depending on your bike, and how you like to travel, the U lock can be either very cumbersome or hugely practical. Typically one will fit in a top box, while bikes with large underseat storage areas can often accommodate them. Some modern ones also incorporate an alarm, which goes off if the lock is tampered with.

Pros: More difficult to cut than cheap disc locks. Practical to carry on some machines.

Cons: Shape can make them difficult to attach to solid objects and may not be practical to carry around.

Top tip: Separating the lock from the shackle can make the U lock easier to transport around. 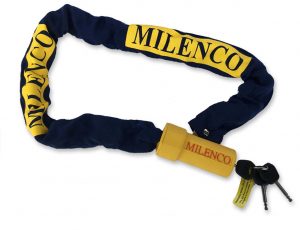 The classic combination that’s considered by most to be the most secure way to keep your bike.

Chains are great because they allow you to lock your bike to an immovable object, like a lamppost, railings or a ground anchor. Like pretty much every other type of lock here, chains and locks come in all kinds of shapes and price points. A good quality set up can cost several hundred pounds and will be hefty if you need to carry it around with you. There’s also a huge variation in the quality of chains around. Lightweight ones can be easily attacked with angle grinders and bolt croppers, or even frozen with liquid nitrogen and then smashed, but it will still slow down and inconvenience a potential thief, who may well choose a softer target.

Pros: Typically provide the best security and most flexibility.

Cons: Best ones tend to be heavy to carry around.

Top tip: Many riders will have a heavy weight chain and lock to use in conjunction with a ground anchor at their home or work, with a more transportable set-up for when they are out and about.

Do your research: A quick web search can reveal loads about the lock you plan to purchase. Chances are there will be quite a few online reviews from people who have already spent their hard earned cash on the product, so have a look and see what they’ve got to say before shelling out for yourself.

Check with your insurance company: Insurance companies often offer discounts for security products, including some locks, and sometimes their use will be a condition of cover. Keep them informed and it may even lead to cheaper motorbike insurance.

Look for the brand: Abus, Oxford, Luma, Milenco, Artago, Squire, Kryptonite, Pragmasis, Almax… there are many established players in the security world and generally there’s a peace of mind in buying a known brand instead of a generic no name lock from the internet. That’s not to say that the name is everything. All the leading brands make a range of products and it’s unlikely that their lowest priced models offer the same security as the top-of-the-range stuff, although it’s reasonable to expect that they offer the sort of value expected at that price point.

Check for awards: It’s hard to try security products before you buy, as the first time you’ll really discover how good they are is when some scrote tries to steal your bike. Thankfully there are people out there who do the testing for you, so look out for any awards or endorsements the product may have won. In the UK, Sold Secure is a project run by the Master Locksmiths Association. It tests products submitted by manufacturers and classifies them as Bronze, Silver or Gold – giving you an indication as to how long the product withstood their attacks. If a product has gone through this test, it will usually say so on the packaging or company webpage. Look out too for endorsements from specialist publications like RiDE and Motorcycle News, who regularly review a variety of products, including locks.

You get what you pay for: There are bargains to be had but, in general, you really do get what you pay for. That a £20 lock is generally less good than a £200 one is common sense really, so buy the best you can afford, taking into account reviews, endorsements and any offers you may be able to find.

As well a purchasing a lock, don’t forget some of the more basic motorbike security actions too. Parking in a secure area, like a locked garage, is always advisable, but if you have to park on the street, try to find a well lit area and make sure your bike is covered up. Not only will a cover provide protection from the elements, it hides your bike from passing thieves, making them less likely to pinch it on a whim.

And while some of the devices mentioned here may be a little weedy to be your sole form of protection, combining disc locks, traditional chains and U locks will undoubtedly frustrate the criminals and make your bike harder to steal.