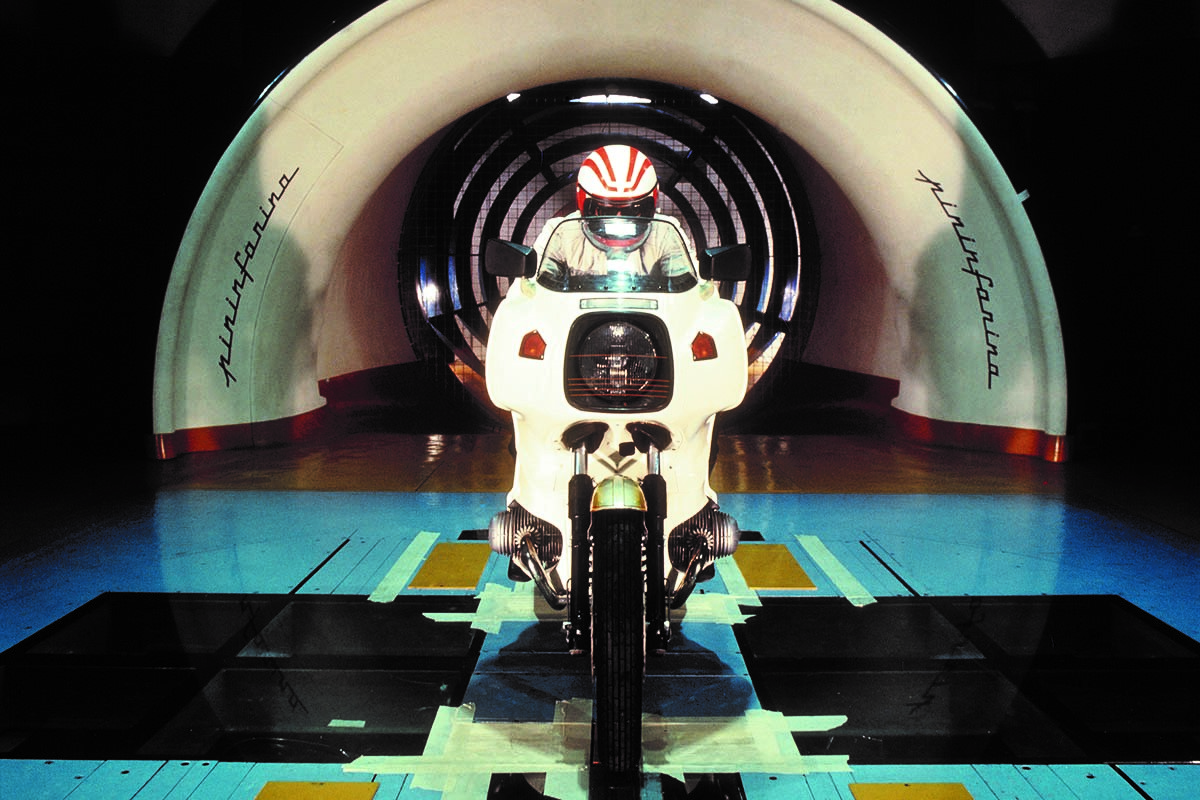 The company started out making aircraft engines at the start of the 20th century and went to launch its first powered two-wheeler in 1923, making them 100 years old.

Over the years the Bavarian company has become synonymous with the boxer twin engine, a design which powered its very first motorcycles, although in recent years it has diversified and makes a varied range which has also included singles, parallel twins, triples, fours and even the mighty six-cylinder K1600 series.

Choosing our five favourite classic BMWs from a 100 year back catalogue is quite a challenge but, as always, we’ve banged our heads together to come up with this collection.

The aftermath of World War One saw the production of military equipment prohibited in Germany. This was bad news for BMW, which was a leading manufacturer of aircraft engines, but good news for us as the company was forced to diversify and led to the foundation of the motorcycle manufacturing company we have today.

Work on a 494cc boxer twin engine began in 1919 but BMW soon made a decision to build a complete motorcycle and this, the resulting R32, was unveiled at the 1923 Berlin Exhibition.

It would prove to be a success and it’s no wonder the R32 is the first model on our list. Not only was it BMW Motorrad’s first motorcycle, it also set the blueprint for the style of machine they would make for the next century. The boxer twin/shaft drive formula remains the mainstay of BMW motorcycle design today, being the format for the present day R series models. 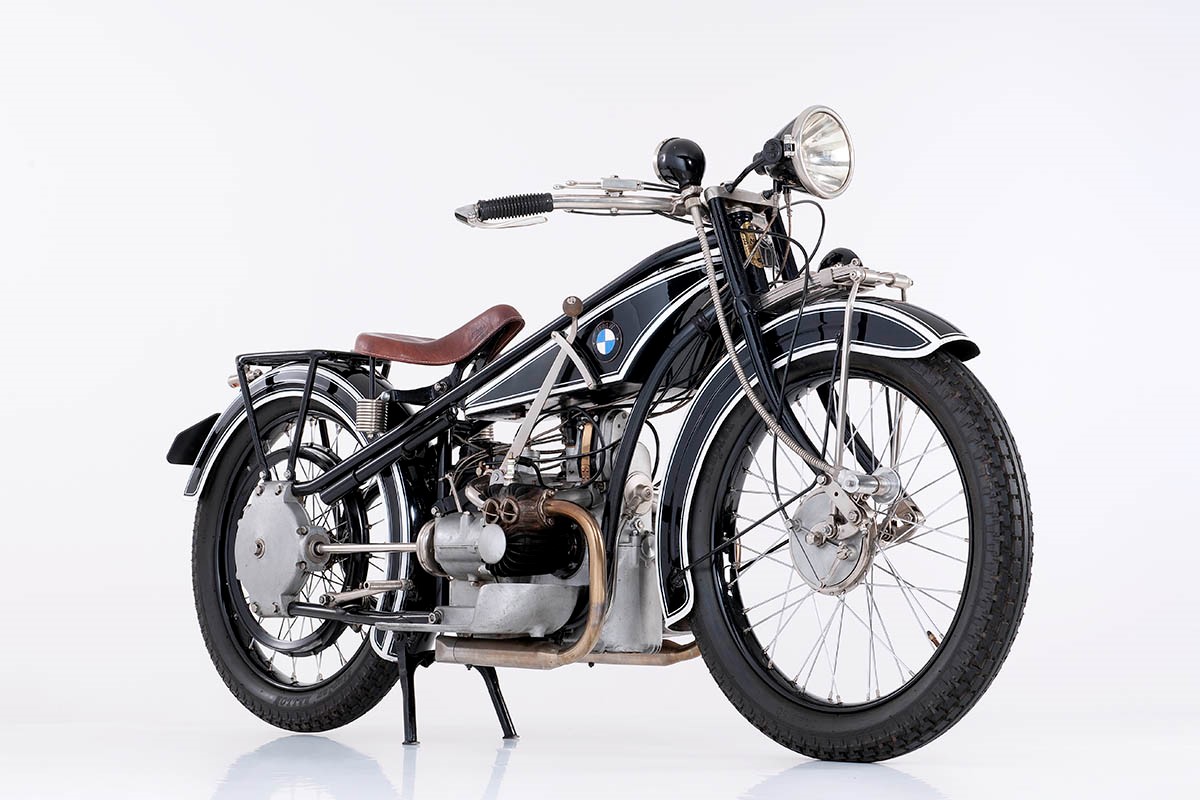 We skip forward 50 years to our next selection, the R90S.

In the half century since the R32, BMW had built a reputation for strong but staid motorcycles.

By the early ‘70s, Japanese inline fours were putting the ‘super’ into superbikes while European rivals stuck with their traditional twin cylinder layouts. And although the likes of Ducati and Triumph still enjoyed some sporting success, BMWs were still perceived as somewhat dull.

The R90S went out and changed that. It was an expensive motorcycle, three times the price of a Triumph Bonneville when new, but it performed. Each was hand built and hand sprayed, most famously in a very 1970s orange and smoke combo.

The R75’s engine was bored out to 898cc, giving it a claimed 67bhp, and the distinctive bikini fairing helped it on to a 125mph top speed. It wasn’t the most powerful, nor the best handling, but it all worked together beautifully and made a motorcycle which also performed well in production racing. British rider Reg Pridmore won the very first American AMA Superbike championship, a series which would go on to inspire the current WorldSBK series, on a R90S in 1976 – the same year in which it also won the Daytona Superbike race and the Isle of Man Production TT. 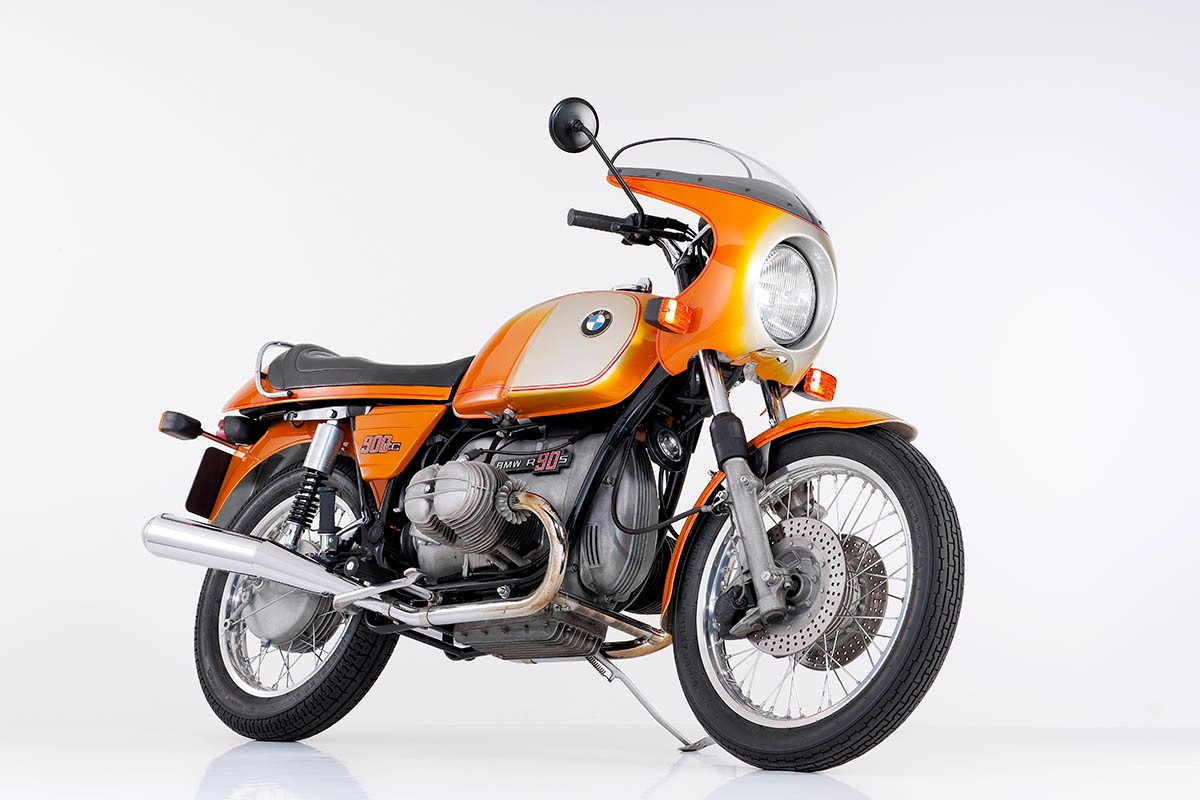 The mid-1970s were the heyday of the Universal Japanese Motorcycle, or UJM, a nickname given to Japanese machines which looked similar and had more or less the same performance.

The R100RS challenged those cookie cutter designs and now enjoys a place in history as the first production motorcycle to be fitted with a full fairing. Aerodynamic bodywork had been a feature in motorcycle racing since before even the start of Grand Prix racing in 1949, while aftermarket fairings were starting to become popular modifications for UJMs, but up to now the fitment on road bikes was limited to the occasional handlebar mounted fairing like those fitted to BMW’s earlier R90S, or the half-faired Ducati 750SS.

The R100RS featured the familiar boxer twin engine, now in its seventh generation, but the generous fairing provided the rider with previously unheard of levels of comfort and made for a 120mph top speed.

Although not a glamourous race replica, the R100RS was a hugely classy sports tourer. It’s another landmark motorcycle from BMW, which is still surprisingly plentiful and affordable in today’s classic motorbike market. 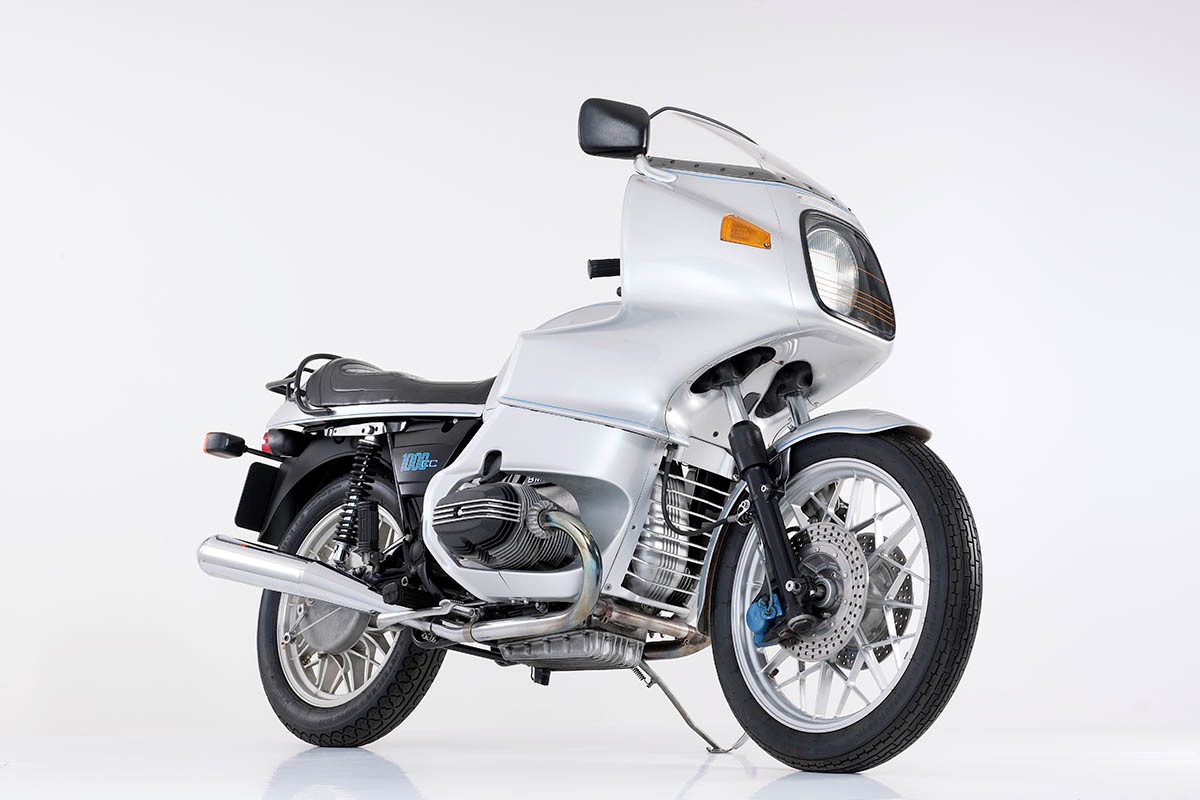 Today’s BMW range is as large and diverse as it has ever been, but by far and away the most popular (and famous) is the R1250GS adventure bike. BMW more or less invented the modern adventure bike with the R1100GS of 1993, and popularised it thanks to the globetrotting adventures of Charley Boorman and Ewan McGregor on its successor, the R1150GS, in 2004.

But this is GS Genesis. The R80G/S (the slash was later dropped) came in 1980 and is considered the first big capacity dual sport motorcycle. The G/S name means Gelände/Straße, which translates from German as offroad/road. In 1981, French rider Hubert Auriol won the famous Paris Dakar Rally on a modified R80G/S, and the company would go on to become one of the leading exponents in desert racing at the time – winning the Dakar four times between 1981 and 1985.

The first G/S was something of a novelty on the British Isles, but quickly gained a strong following on the continent. Today they are much coveted and genuine classic motorcycles. 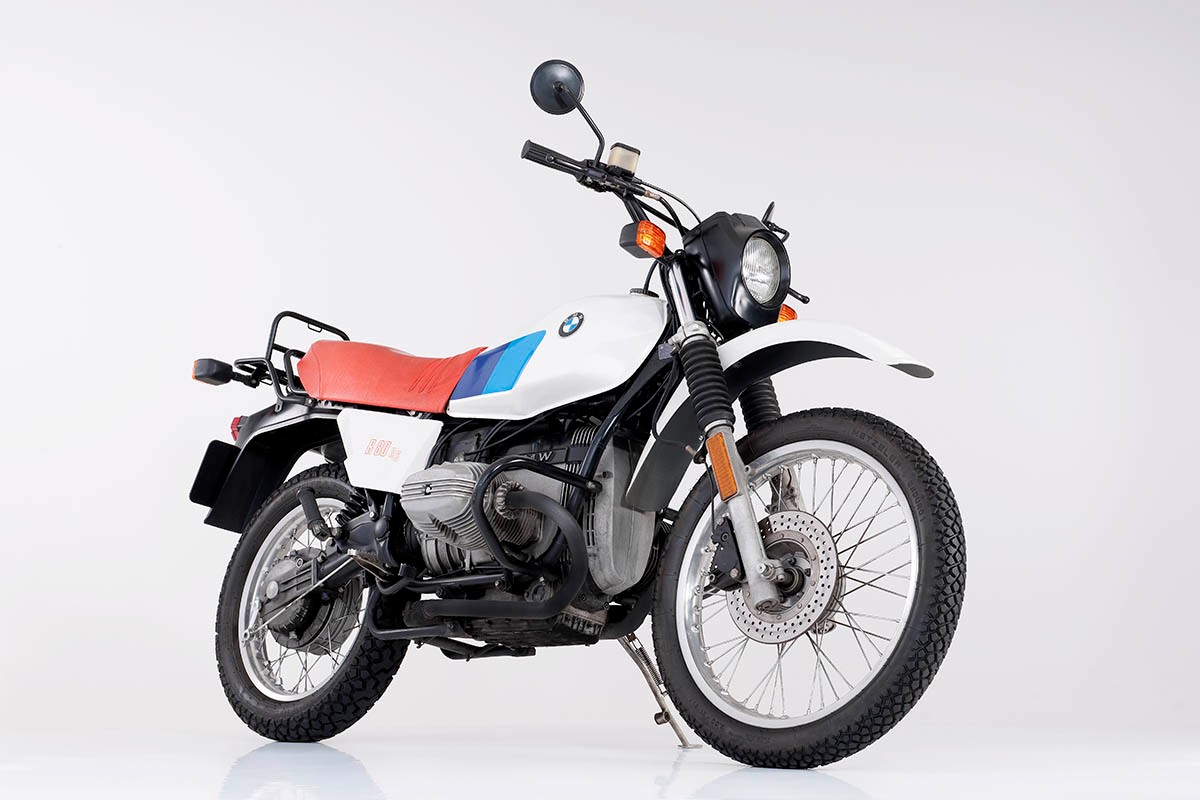 BMW haven’t always got it right, and the jury is definitely out on the K1, but this is our list and we’re big fans of this Marmite motorcycle, another BMW which was ahead of its time in many ways. Indeed, the late 1980s and early 1990s were an interesting time for BMW. They still had a somewhat unfair reputation for making boring bikes, and there was no doubt they liked to plough their own furrow when it came to styling and technical solutions.

And no one could say they didn’t come up with some pretty avant garde designs. The roofed C1 scooter of 2000 certainly took a different approach to the humble commuter, while the R1100C cruiser also caught the imagination, even if they didn’t sell in large numbers.

And before them came this, the K1. 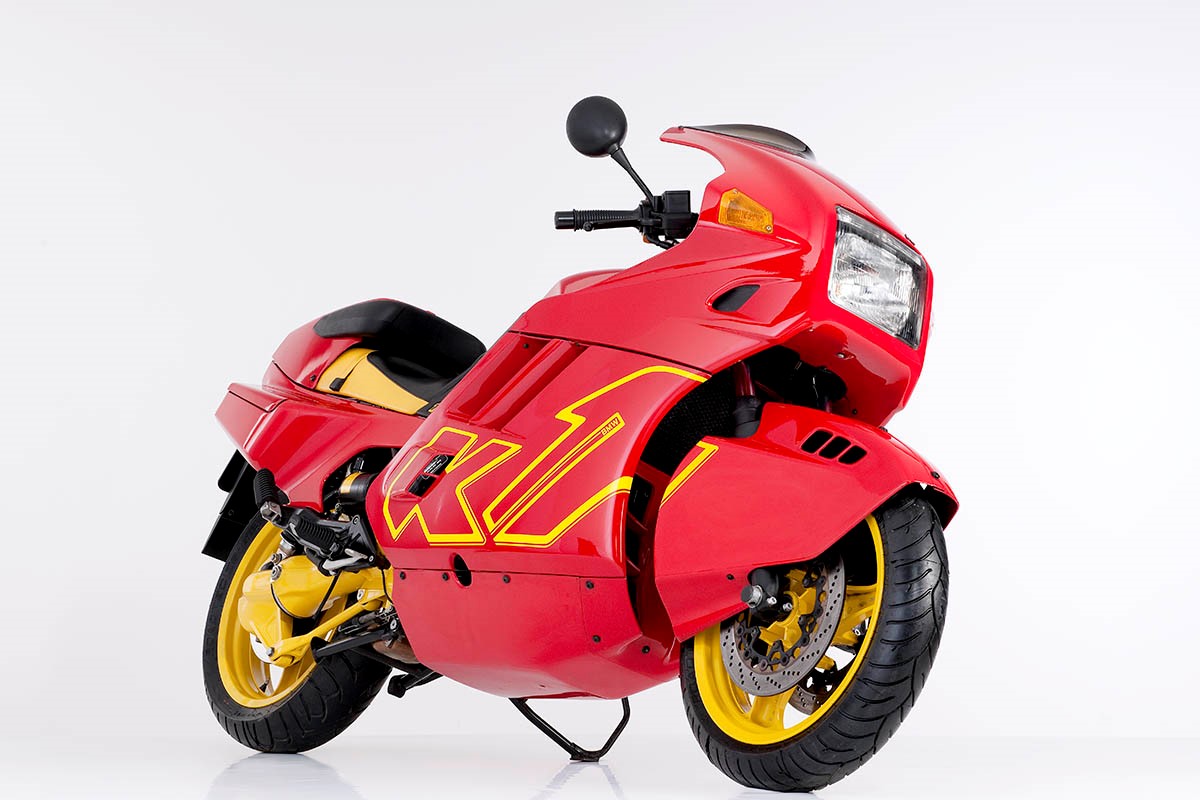 Based around the ‘brick’ engine, a product line of three and four cylinder motors mounted longitudinally along the frame, the K series was BMW’s alternative to the R series of boxer engined bikes and was the company’s flagship sports tourer. With BMW working on the premise that motorcycles would face blanket power restrictions in Europe, the K1 used futuristic aerodynamic bodywork to give a theoretical top speed of 150mph despite only producing 100bhp. With bright colours and bold styling, it wasn’t the typical staid BMW motorcycle. As a sports bike it was too long and heavy, but it was a competent and stable sports tourer – equipped with integrated luggage, early generation ABS brakes and, of course, the most famous BMW accessory, heated handlebar grips.

The K1 may never have outright changed the motorcycling landscape in the way in which the Triumph Bonneville, Honda FireBlade or even BMW’s own GS did, but it remains a bold and iconic design, and an exercise in eighties decadence, from which a number of 1990s technology would develop. 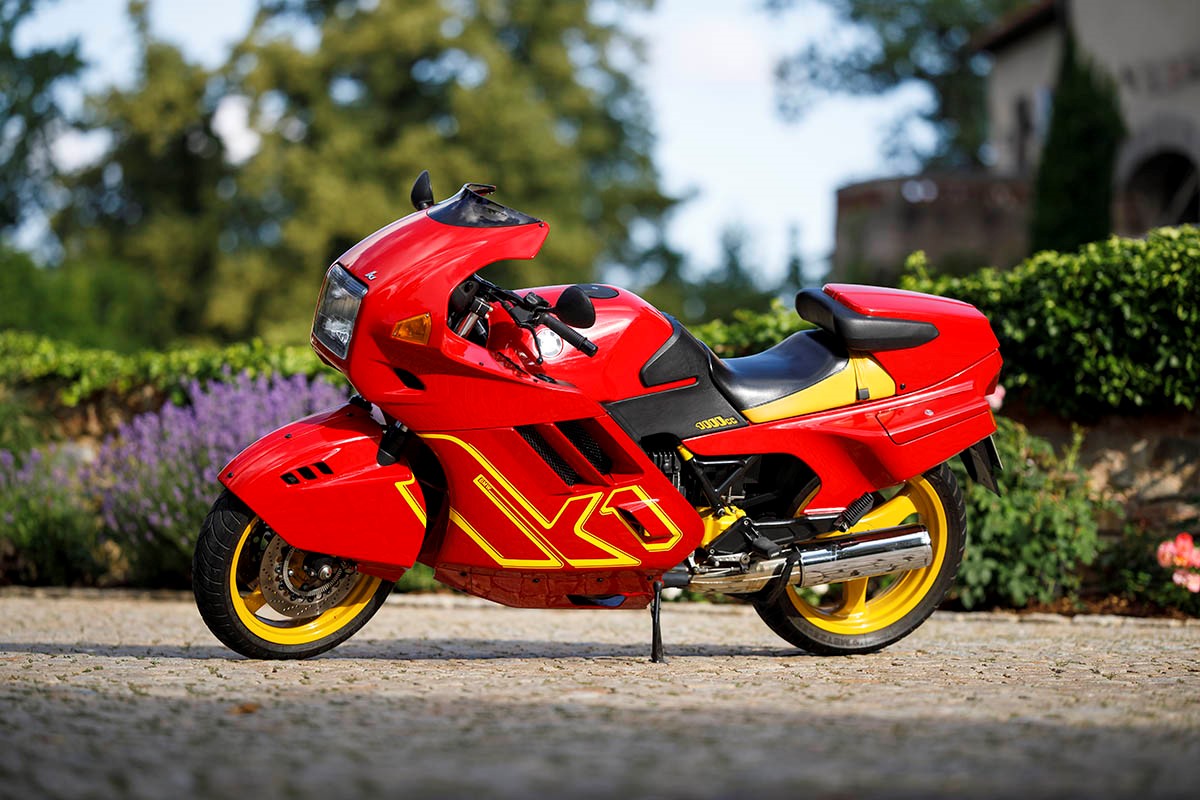