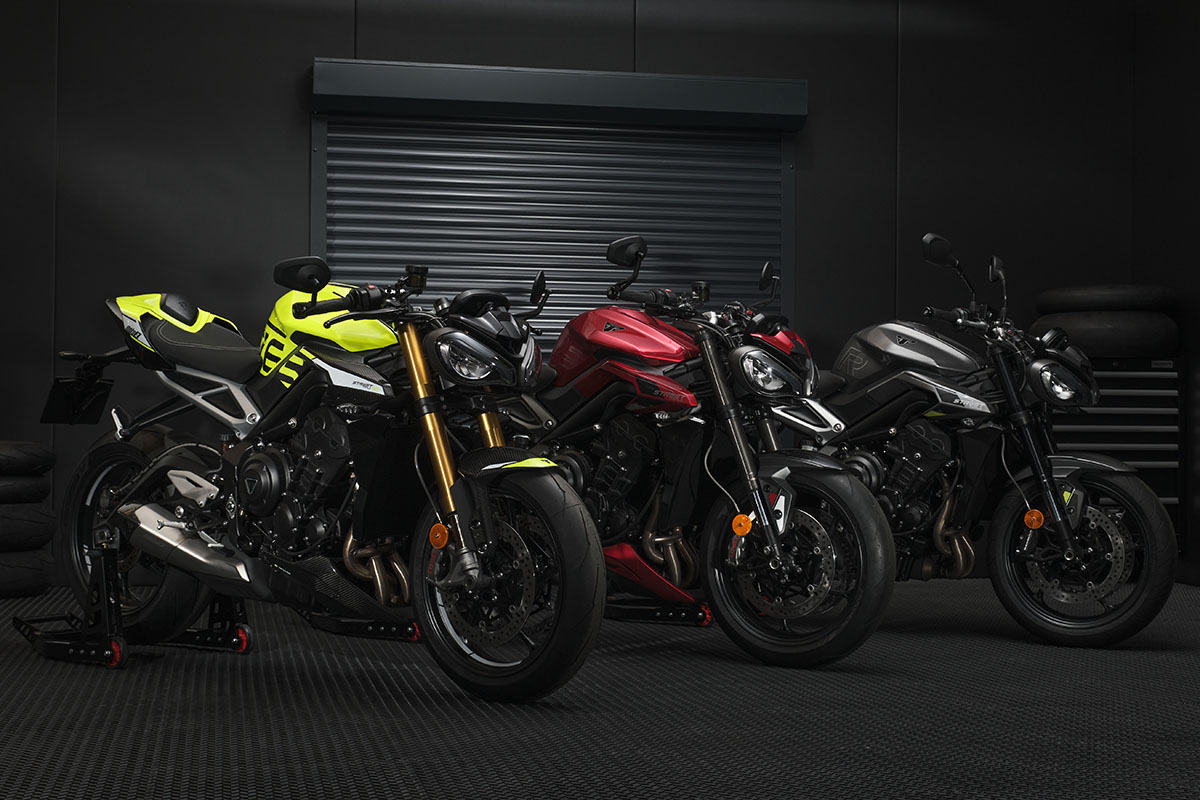 Since it first saw the light of day in 2007, it’s fair to say that the Street Triple has been a serious success story for Triumph, with a whopping 125,000 bikes sold around the world.

Originally a detuned, despecced and streetfightered version of the company’s glorious Daytona 675 sportsbike, the naked Street Triple has outlasted the bike upon which it was based, evolving into an iconic model in its own right.

Since the introduction of the bug-eyed original some 15 years ago, the Street Triple has undergone a number of updates and completely new iterations. Now we’re heading into 2023 and Triumph have upped their game once more. Not only is the base model now near enough on a par with the outgoing top-level machine, but their range topping RS and special edition Moto2 Edition take things a step further. Sure, it’s an update rather than an all-new model, and the base engine and the frame remain the same as before, but the outgoing Street Triples were already absolutely gorgeous things to ride, and this promises to take that one step further. Here’s what you need to know, for each of the three models:

Let’s start with a quick update on the base model, which comes in at an impressive £9,595. Even though this is the lowest powered and spec’d machine on offer, you still get increased power, torque and performance over the previous model, meaning 120bhp, 80Nm torque and a revised gearing and final drive set-up. The R also gets cornering ABS and optimised traction control, alongside a slightly more aggressive riding position and a new, more aggressive, makeover shared across the range.

Now this is where things get serious. Triumph have made a big jump, not just from the previous generation, but also compared to the base model ‘R’ version. The RS gets a 6% power hike, bringing the total figure to just shy of 130bhp. This has been achieved through a whole host of internal engine upgrades, including a new inlet port, higher compression ratio, optimised combustion chamber, new conrod, new shorter intake trumpets, new valves and camshafts… the list really does go on. This also works with the revised gearing and final drive, alongside a new exhaust too, which Triumph say has all been harnessed from their experience powering the Moto2 world championship.

Triumph have also raced the RS in the Supersport World Championship, even winning a race with a motorcycle modified (and fitted with a fairing from the old Daytona 675) under the new ‘Next Generation’ regulations.

So the RS gets some updates that should really help it in racing. There are some big changes to make it handle that bit sharper. Geometry is modified thanks to a steeper rake and a raised back end, providing a sharper and more agile feel to the new Street Triple RS. It comes on some incredibly high spec Brembo Stylema four-piston calipers with 310mm discs, alongside fully adjustable Showa suspension on the front end and a fully adjustable Öhlins unit looking after the rear. Triumph have then finished the RS with lightweight wheels, Pirelli Supercorsa rubber and a handlebar set-up that is 12mm wider than on the previous model.

To top things off, the RS also comes with uprated electronics too. Optimised cornering ABS, a new, track focused ABS setting and five upgraded modes all come as standard, which work alongside the new throttle maps, cruise control and TFT dash with Bluetooth connectivity. Like the previous model you get a quickshifter and autoblipper as standard, and it will set you back £11,295.

If the RS just isn’t enough for you, then Triumph have also delivered a limited run of the Street Triple, dubbed their Moto2 Edition. Despite the absence of a fairing, Triumph say that this is the closest thing to a Moto2 bike you can buy for the road. Unlike the other models in the range, it comes equipped with a set of clip-on handlebars, which are 80mm lower and 50mm further forward for a sportsbike feeling, alongside fully adjustable high-spec Öhlins both front and rear, the choice of two different Moto2 designs and a host of carbon bodywork, to finish off. There will be 765 units of each colour, all uniquely numbered on the top yoke.