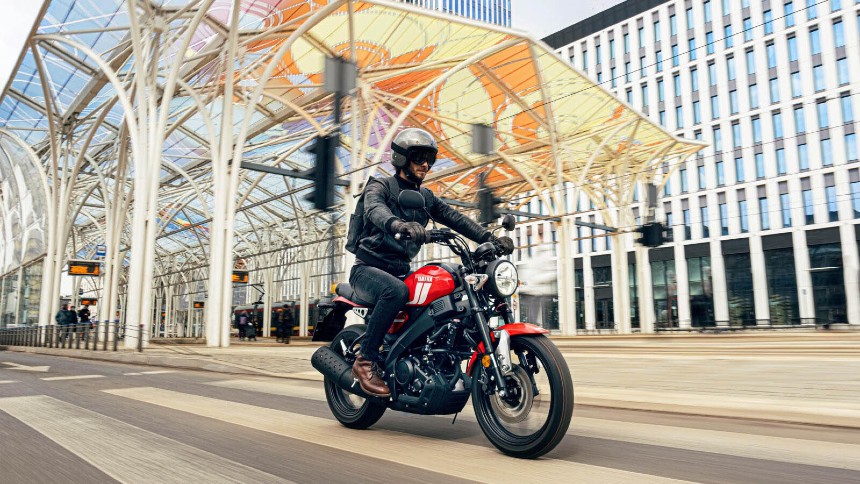 The Japanese brand already has one of the strongest geared 125 offerings around, starting with the basic YS125 commuter and including the race replica styled YZF-R125. The XSR, which joins the bigger XSR700 and XSR900 in the ‘Faster Sons’ retro range, gives a third flavour to the MT/YZF-R platform but wrapped up in more of a classic motorbike style.

Priced at £4450 when it arrives in showrooms in June, the XSR blends modern technology with traditional lines. The liquid-cooled motor is shared with the MT-125 and YZF-R125 and is thoroughly modern, complete with variable valve timing to maximise bottom end torque and power delivery, without sacrificing any of the 11kw (14.75bhp) allowed under A1 licence laws.

Like Honda with its CB125R, Yamaha has employed what it describes as ‘neo retro design’ although the XSR125 is arguably a little more ‘retro’ and bit less ‘neo’ than its rival, thanks to details like the block patterned tyres and the Seventies inspired ‘tuck and roll’ seat. The styling and the three colour options: red, black or yellow, also hark back to a previous era, with a mash up of scrambler and roadster. The tech is pure 2021 though, with LED lights front and rear, 37mm upside down forks and an LCD dash.

It looks a real hoot and could prove a popular choice with trendy city dwellers looking for a funky commuter.