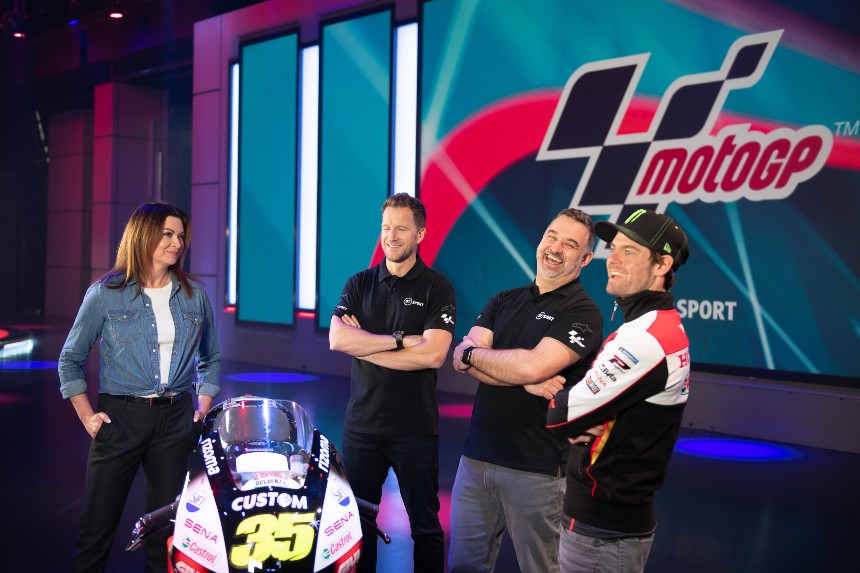 BT Sport has brought previously unseen levels of coverage to MotoGP since winning the rights to broadcast it from the 2014 season. The digital channel shows every single practice, qualifying and race session live, and became known for its insightful journalism and features from a large on-site team.

But since the Covid-19 pandemic struck, the team has been broadcasting remotely – firstly from Triumph’s Visitor Centre in Hinckley and latterly from the iconic BT Tower in London – taking the ‘world feed’ pictures and adding their own commentary from a team led by Emmett, who is backed by ex-racers Neil Hodgson and Michael Laverty – with Suzi Perry presenting.

After being almost exclusively off-site due to travel restrictions and Covid protocols in 2020, the BT Sport team have at least benefited from being able to send pitlane reporters Natalie Quirk and Sylvain Guintoli (the 2014 Superbike World Champion, no less) to most races this year, while the commentators have remained in the UK. Despite the challenges, the team has still been able to bring top notch television, but remain desperate to get back into the racing paddock.

While Zoom meetings with the riders and team bosses mean that the BT Sport team remain connected with those inside the paddock, one thing they’re not able to do is sniff out the stories that are taking place away from the cameras.

Gavin continued: “Of course, there is a frustration at not being able to be on site. In terms of informing and telling a story it has made our jobs tougher because we are not there and we’re not living and breathing it inside the paddock.

“You don’t see Marc Marquez hobbling after his crash on Friday, which maybe doesn’t look too bad on TV. You don’t see Raul Fernandez having a conversation with Lin Jarvis behind the Yamaha trucks. You see so much behind the scenes and as a journalist that’s frustrating, but hopefully we’ve still been able to stay connected.

“We’ve got a lot of contacts in the paddock feeding us information and the rider debriefs are caried out over Zoom, so we try to cover all of them. We also do our own interviews with the riders during the week, so that’s nice and keeps us in touch.”

Part of BT Sport’s appeal is the great depth of its coverage. Friday’s free practice sessions are for the hardcore MotoGP fans, and usually give the BT Sport team an opportunity to talk about what’s going on behind the scenes, while the departure of veteran commentators Keith Huewen and Julian Ryder has seen a change in style. Emmett leads behind the mic and commentates on all the races, but Hodgson and Laverty share the co-commentator duties, which 43-year-old Gavin says keeps things fresh.

“It’s the same with Charlie Hiscott, who’s joined us this year. He’s worked with us for a long time as a producer, but this year he has been joining us in commentary on Friday. Charlie likes to act the tough guy with his questions and sometimes plays devil’s advocate. We’ve got different points of view and I hope that comes across.”

Along with Suzi Perry, Emmett came across to BT Sport from the BBC, who had previously held the rights to show MotoGP. “I enjoy working for them (BT Sport) because we have been given everything we need to do the job,” he continues.

“I used to work on the world feed and then BBC. BBC was a different world. It was for the everyman. Sure it was for those who liked their bikes, but it was also for the person on the street who just loved sport on a Sunday afternoon, and who perhaps knew nothing about MotoGP, while Eurosport were a more specialist broadcaster.

“BT had the best of both. It has the budget to send a big team out on site hopefully we satisfy both the hardcore and laypeople.”

Emmett’s own career has seen him spend 20 years in the paddock. Back in 2000 he joined the first ever Dorna (promoters of MotoGP) in house media team, firstly writing for the motogp.com website and latterly commentating on the world feed (a common English language commentary shared with channels around the globe) with friend Matt Roberts, who is now better known for fronting Eurosport’s British superbike coverage.

“When I got into it, it was purely through luck,” he told us. “I have had a love of watching sport since I was knee high to a grasshopper. I used to sit and commentate on sport, when I was about six or seven, pressing play and record on a little voice recorder!”

And Gavin has some encouraging advice for the next generation of aspiring motorcycle racing journalists. “I actually think it’s becoming a little bit easier to get into it,” he told us. “We didn’t really have the Internet but now there is the chance for people to start their own blog, or YouTube channel, or podcast. Even if it’s a home project, there’s a chance to hone your skills and nowadays there are a lot of opportunities to be noticed and to build a showreel.

“My advice would be to anyone who loves the sports and wants to tell people about it is to write your own blog or create your YouTube channel. I started out writing for motogp.com with Adam Wheeler and Matt Roberts, when they took the website inhouse. Within six months we were making videos for the likes of Suzuki and, within a year, myself and Matt were commentating and doing pitlane reporting for the world feed.

“If you can show that you have a love for the sport and a love for telling people about it then people will take a chance on you. There will be a bigger pool of talent (than 20 years ago) but if you shine there will be opportunities.

“You also have to be willing to make a sacrifice. When I first started, myself and Matt were living in a one bedroom bedsit in Barcelona. He had the bedroom, I had the sofa. We were not making enough to eat properly but we put it all on the line. We were working to midnight every night to show how much we wanted to do it, and it paid off in the end.”

Read parts one and two of our interview with Gavin Emmett, where he discusses the summer MotoGP rumours and the need for a British MotoGP team on Insidebikes.

Yamaha R125 get facelift and tech updates for 2023

With new owners, big ambitions and a shed load of money behind them, Norton are back in the game. But, just how good is their reborn Commando 961?