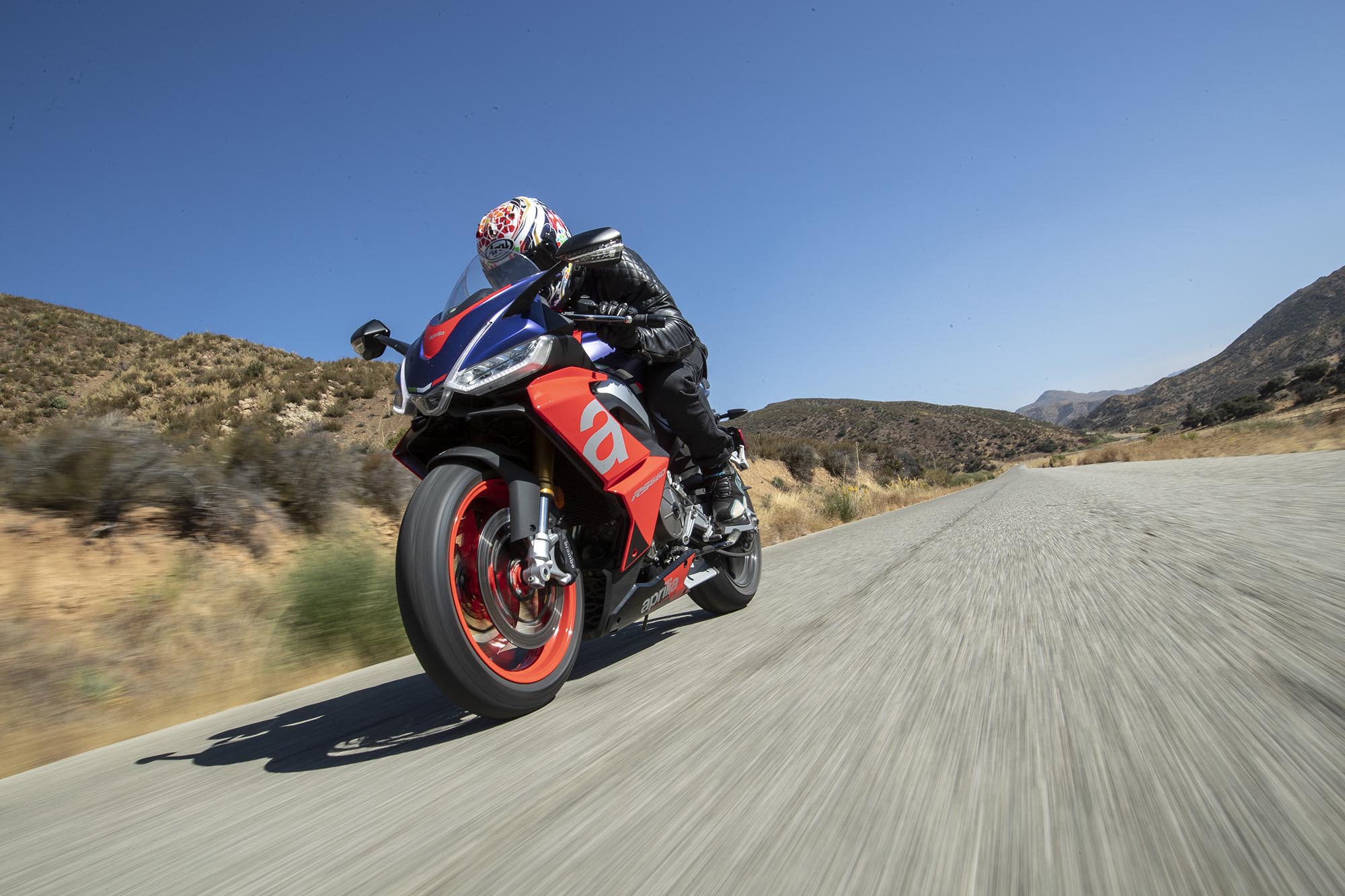 Aprilia’s RS 660 is a fresh take on the middleweight class and a spiritual successor to the iconic RS 250 two-stroke of the 1990s. Aprilia have some form when it comes to making cracking little sports bikes, meaning that the new RS 660 is eagerly anticipated.

The motor is an (almost) all-new 100 bhp parallel-twin four-stroke wrapped in an aluminium dual beam chassis and, crucially, comes with a full suite of rider aids in the famed Aprilia Performance Ride Control electronics, with even more adjustability than found on the RSV4 superbike.

We say ‘almost new’ because the 57 kg parallel-twin motor is essentially the front half of the RSV4’s 65° V4, measuring 81 x 63.93 mm for 659 cc. Running a 270° crank, the motor runs a single gear-driven counterbalancer to reduce high rev vibrations, and uses a modular cam drive layout with a chain driven from an idler gear off the crank. There’s twin 48 mm ride-by-wire throttle bodies fed by an intake in the centre of the steering head, not to the side like the RSV4. The throttle body manifolds are different in length, helping give optimal air volume at low and high rpm.

So that engine is pretty fly, but what makes the RS 660 so utterly appealing is the chassis, ergonomics and rider aids. The die-cast twin-spar aluminium frame is ultra-skinny, with a near ideal level of sporting stiffness required for weekend track day scratches while remaining plush enough to soak up road corrugations on your way to work.

suspension is taken care of by fully-adjustable Kayaba 41 mm inverted forks and a Kayaba monoshock out back, although the shock is not fully adjustable with rebound damping and preload adjustment only.

The shock doesn’t run a linkage but acts directly on the swingarm, which in turn pivots inside the crankcase, helping centralize mass and reduce the wheelbase while still allowing the use of a relatively long swingarm. Brakes come in the form of twin radial-mounted Brembo four-piston monobloc calipers clamping down on 320 mm discs, with cornering ABS front and rear.

The handlebars are clip-on style, but not actual clip-ons, and sit higher than the steering head, placing the rider in an almost naked bike ride position. The handlebar position is complimented by lower set footpegs than would normally be expected for a sportsbike, although the ever so short heel guards mean that the back of your boots will rub against the moving swingarm if you tuck your feet in.

Moving onto electronics, there’s everything the RSV4 gets and more. You can’t vary the engine brake control on the RSV4, but you can on the RS 660. In fact, you can adjust pretty much everything in the APRC system of traction control, wheelie control, cornering ABS, quick shifter, cruise control, pit lane speed limiter and the five different riding modes.

The thing that strikes you when you first climb on board an RS 660 is how skinny it is, and the way it carries its weight. Throttle response is perfectly metered too—there’s no jerkiness from fully closed, but equally, the power doesn’t rush in uncontrollably. At 100 bhp, there’s enough go to keep you entertained and enough go never to be bored by it.

You’ll want to make sure you change gear before you crash into the harsh rev limiter at 11,500 rpm, though, but by then you’ve run past where all the acceleration is. Keep the RS surfing between 6-10,000 rpm, and you’re met with constant drive and torque to pull you from one corner to the next. It truly is an addictive little engine.

The Kayaba forks have an impressive action, especially on the brakes. You can simply hammer through corners on the RS 660. The lack of overall weight compared to a bigger bike, and the narrow feel of the chassis, gives loads of confidence to the rider while cranked over. Its turn speed is huge, partly due to the 5.5-inch rear wheel compared to the 6 inch units more commonly found on sportsbikes. You can throw the RS around and it just keeps coming back for more.

The RS 660 is an absolutely splendid sports bike and one we’ve been crying out for, for years. At £10,150, it sits in a unique place in the market. It’s a good chunk more expensive than the more basic twins from Japan and sits between the traditional 600cc supersport bikes like the Kawasaki ZX-6R and Yamaha YZF-R6.

The mix of ideal power, a light and nimble chassis and the electronics—not to mention the well thought out riding position, make this such a great bike and a refreshing alternative to those 600cc fours. It’s also available in a 95bhp version, which makes it eligible to be further restricted for A2 licence holders. The RS 660 will also launch a new line of bikes bearing the same engine, with an unfaired Tuono version coming in February and a Tuareg adventure bike likely by the end of the year. If both these bikes perform at the same level as the RS 660, the future for Aprilia is very bright indeed.