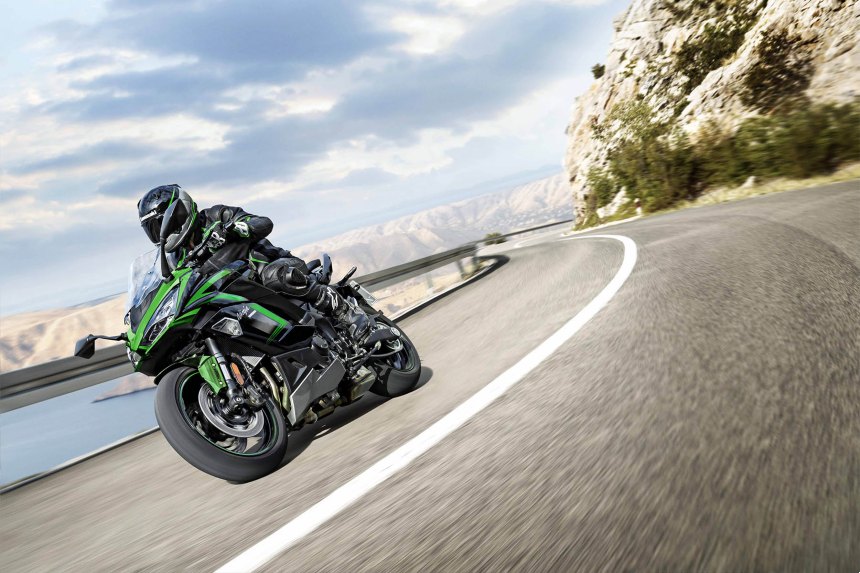 It may not be a headline grabber, but the Ninja 1000SX is Kawasaki’s bestselling model. We took one for a spin to find out why.

Kawasaki’s Ninja 1000SX is something of a rarity in today’s marketplace. It’s arguably the last bastion of the sports tourer, a solid all-rounder that’s designed to do everything prett y well – a Jack of all trades if you will – and it has proved pretty popular in recent years. It’s Europe’s best-selling sports tourer and Kawasaki’s most popular model in the UK. Indeed, it’s actually the top selling four-cylinder bike here in Britain. A real sign of the changing marketplace in recent years.

Despite having a new name, this is actually the fourth generation of the SX. Previously it was known as the Z1000SX, in light of the fact that it was an offspring of the Z1000 supernaked, but revised Kawasaki nomenclature means that the ‘Z’ prefix has been reserved for un-faired models, while most things with a fairing are now dubbed Ninjas. That may irk Kawasaki purists, as the Ninja name plate was previously only reserved for the raciest models in the range. The 1000SX is no cutting edge sports bike, but it is a fast and highly competent motorcycle.

My previous encounter with Kawasaki’s sports tourer came some years ago, when I rode a second generation model. It was one of the most underwhelming experiences of my bike testing career, feeling like a mismatched marriage of a revvy Z1000 engine and a long, heavy and far too lazy chassis. Thankfully the 2021 1000SX is a far improved package, as we were to find out.

One thing that hasn’t changed throughout the SX’s lifetime is the value for money it offers. Priced from £11,299 (£11,499 in the green we tested) with another £900 for the touring version (essentially the addition of panniers and a taller screen) there’s not much out there to give as big a bang for your buck. Yamaha’s Tracer 9 GT is probably the nearest thing to the 1000SX in terms of price and purpose, but with a 120bhp, 890cc three-cylinder motor at its heart, it’s actually a very different animal.

The Ninja 1000SX knocks out 140bhp from the 1043cc inline-four and although it’s a pretty old school formula there’s actually some pretty modern tech in there. You get three riding modes, three traction control settings and a quickshifter for both up and down shifts. The TFT dash isn’t the fanciest out there in 2021 but it is neat, comprehensive and very easy to read. With an IMU at the heart of the bike, it even tells you irrelevant stuff like your maximum lean angle through the corners – which is nice, or disheartening if your name’s not Jonathan Rea. 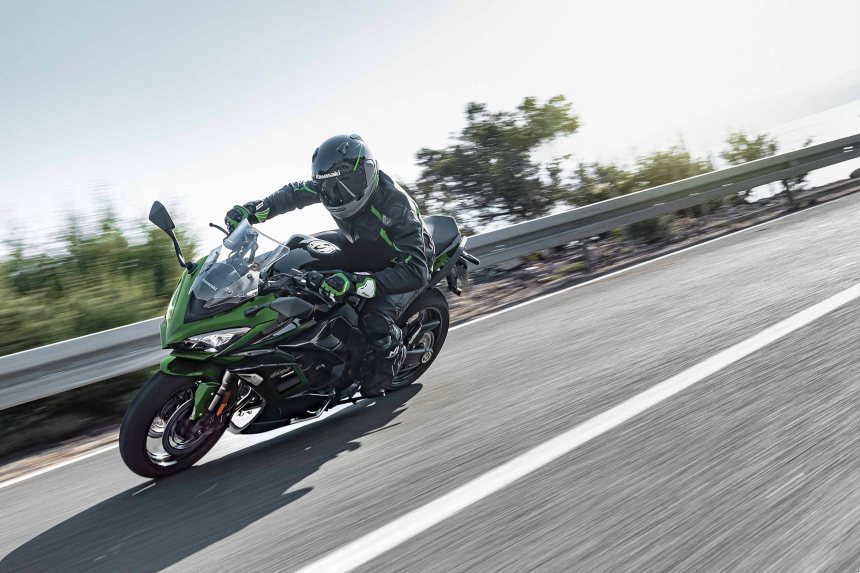 And the Ninja 1000SX can certainly party. It ain’t no ZX-10R but it’s certainly sharper than previous generation models. As if to reinforce the ‘sports’ element of sports touring, Kawasaki has equipped it with suitably sticky Bridgestone Battlax Hypersport S22 tyres. That was a pleasant surprise, as tyres are one of the most important components on any motorcycle, yet often one of the first things to be downspecced when the accountants get involved.

But actually, even though the 1000SX offers great value it never feels cheap – not for a second. One thing that has struck me about Kawasakis in recent years is the quality of their paint, and the 1000SX is no exception. The metallic green and black of our test bike really popped in the sun, and I couldn’t see any examples of corners being cut to save a few Yen.

On the touring side of things, there’s also plenty to get excited about. The view from the saddle is dominated by the sat-nav mount, which does look somewhat ugly when left unoccupied but is a useful addition, and you also get heated grips, cruise control and a riding position I found to be nice and comfy. The fuel tank is a decent 19 litres, which should be good for almost 180 miles between stops.

It is all nicely thought out and the lines are really clean with the panniers removed thanks to a very integrated mounting system. Another nice touch is the hand operated remote rear suspension adjuster, which allows the preload to be increased or reduced with a simple twist and without tools. It might seem like a small thing, but it makes adjusting the rear suspension a cinch when you carry a passenger or full panniers.

It’s also another area where Kawasaki could have chosen to save a few bucks, but instead chose to do the right thing for the customer. Our test bike came without panniers and had a seat cowl replacing the pillion pad, meaning we didn’t get a chance to try out pillion comfort during our test, although the large and well placed grab handles are certainly passenger friendly.

Front suspension is also adjustable and, overall, the cycle parts pass muster. Almost a decade ago sports tourers like the first generation 1000SX, Triumph’s Sprint GT and Suzuki’s GSX-S1000F really felt like the poor relations to the sportier models in their respective ranges, but that’s not the case with the fourth generation Kawasaki.

It’s indictive of the marketplace, which is leaning more towards triples and twins, that it was actually something of a novelty to be testing an inline four. Just like the second-gen model I disliked so much all those years ago, the 140bhp motor spins up freely but, unlike the older bike, it feels much more in tune with the chassis.

Despite weighing in at 235kg fuelled, it actually feels nicely balanced and easy to ride. The clutch and gearbox are both very light and accurate and, as a shorter rider, it feels much more accessible than an adventure bike, with the highish ‘bars giving a natural riding position. If I have some gripes, then I would say that the screen wasn’t hugely effective for me, and there was a slight buzz through the seat at cruising speeds. That said, I could live with both and there is the option of a larger screen on the touring version. 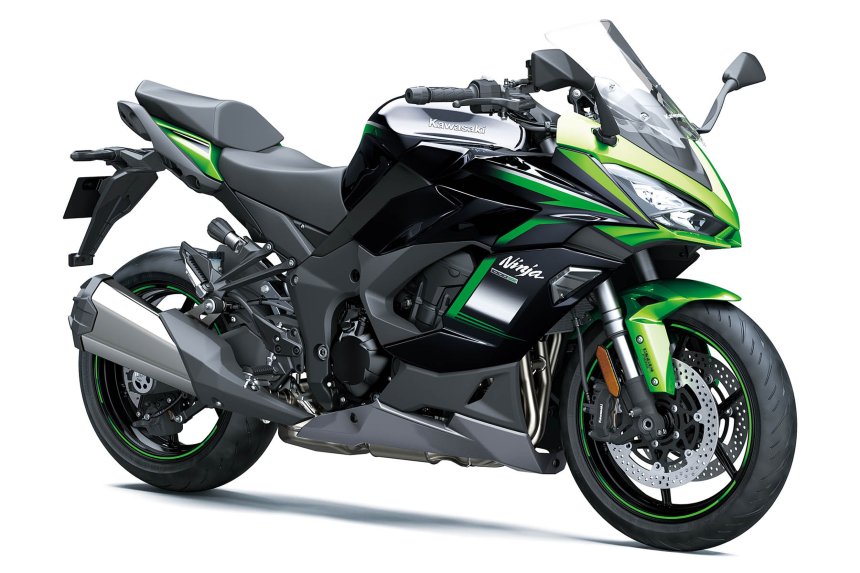 Now I know that there are more sporting and dynamic rides out there but, for an average Joe like me, the Ninja 1000SX has more than enough real world performance. It hauls, without being at all intimidating, and although the chassis is a still a little long and lazy compared to more focussed sports bikes, it’s also secure and stable at sensible road speeds.

It’s not a bike I’d choose to take on a track day, but it is one of those rare machines that could take you to work in relative comfort five days a week, while allowing you to have fun on a Sunday and still being able to get loaded up for a tour of the Highlands once or twice a year.

The Kawasaki Ninja 1000SX is something of an outlier in today’s motorcycling landscape but, despite that, it is easy to see why it is so popular. It’s a natural successor to old school favourites like the now defunct Suzuki Bandit and Yamaha Fazer, a machine with genuine all-round ability but with a spec sheet and build quality that belie the price tag. It’s a bike that really benefits from the modern electronics but unlike the aforementioned Bandits and Fazers, it doesn’t feel like it’s been built to a budget.

I had fully expected the Kawasaki Ninja 1000SX to be something of a dinosaur but the reality was far from that. Sure, it won’t hold a candle to a well ridden superbike around a track while many riders will prefer the practicality of an adventure bike but, as the sales figures show, there’s still demand for a well priced all-rounder. It’s not just a lot of bike for the money, it’s a highly competent machine that does everything acceptably well.

It’s no surprise to see so many rolling out of the showrooms in 2021.