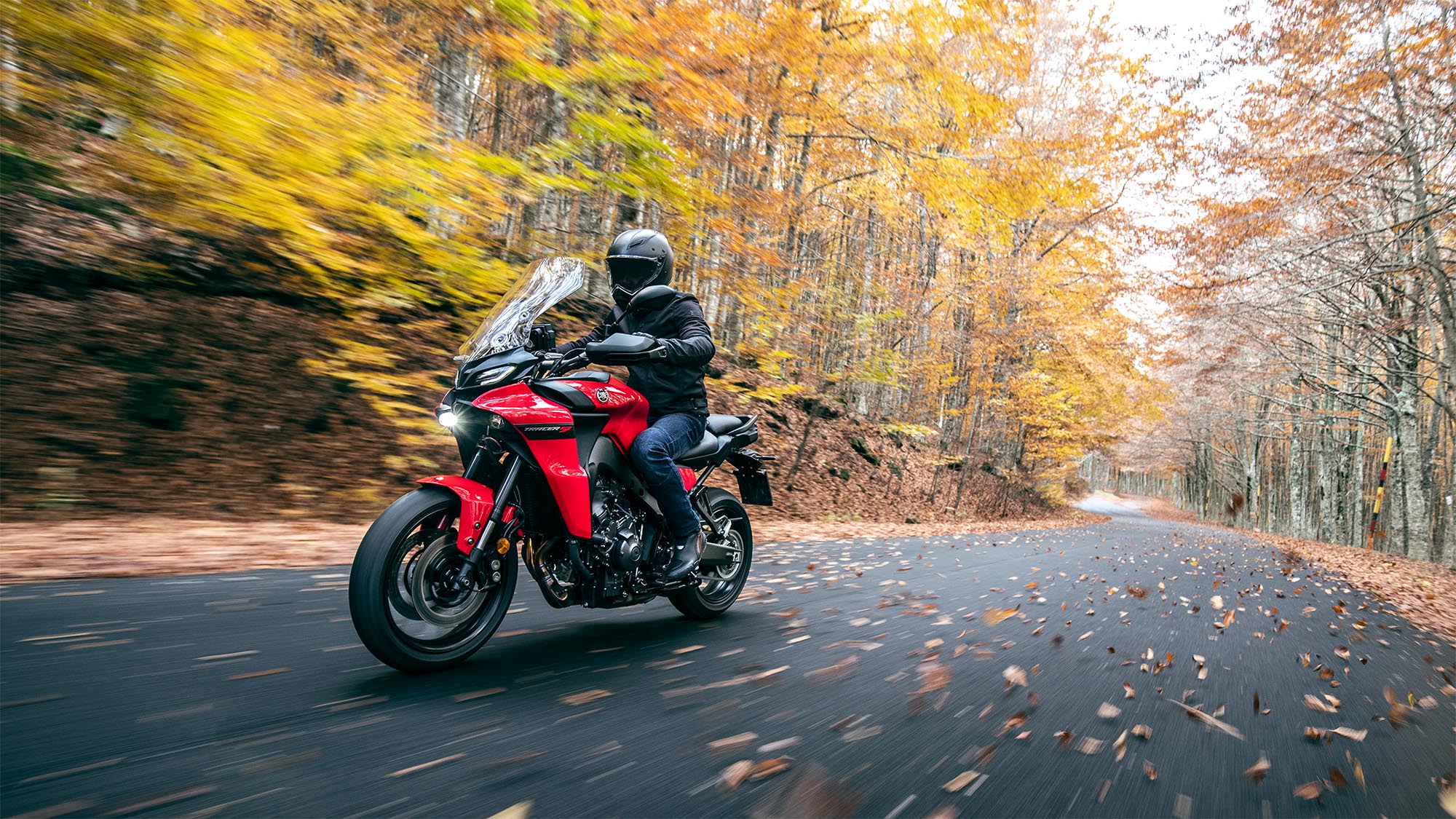 For 2021 both models – essentially the same bike but with different options for touring added to the GT model – get more power, a larger-capacity engine and lower weight aimed at keeping competitors at bay, as well as making it compliant with the latest Euro5 emissions rules.

The blend of perky performance, decent styling and a great price have been key ingredients behind the success of the Tracer 900 and Yamaha will be hoping the changes it has made for 2021 will be enough to improve on this recipe.

Yamaha has outsold rivals by almost three to one in 2019 and they are making a big play of the new technology on the Tracer 9 – the ‘most sophisticated technology even seen on a Yamaha sport touring model’ according the Japanese firm.

Yamaha is claiming the CP3 engine is completely redesigned and is now a longer-stroke version of the original engine with an 890cc capacity thanks to a 3mm longer stroke. It’s the same powerplant that’s also being introduced into the naked MT-09 in 2021, as part of the EU5 modifications.

The 3mm longer stroke (up from 59.1mm to 62.1mm) boosts the available torque by a claimed 7% - peaking at 93Nm which is now produced at 7000rpm; 1500rpm lower than the previous motor. This is the kind of change that will be noticeable to road riders the most – and should really help with overtaking moves with an instant pool of torque to assist.

Power has now increased to 119bhp – up from 115bhp – and Yamaha is also stating the engine is now lighter than the outgoing engine thanks to the modifications made for 2021.

It’s not just the engine that’s been given a complete overhaul; there’s a new Deltabox die-cast chassis too which is lighter, stronger and is claimed to assist with improved handling too.

The swingarm of the new Yamaha Tracer 9 may look the same as the outgoing model but it has, in fact, been completely redesigned for 2021 with internally-mounted pivot point which replaces the outgoing bike’s external swingarm mount.

Yamaha’s YZF-R1 superbike has some of the most sophisticated of the latest electronics fitted and these have been adapted to fit the Tracer 9 – this means a six-axis Inertial Measurement Unit (IMU) works to tie in all of the sensors and the bike’s control systems.

The IMU measures six different axes – forwards/backwards, up/down and left/right directions as well as the velocity of the bike’s pitch, roll and yaw directions. All of this enables the bike to know what’s going on and to be able to intervene if needed to increase rider safety.

The safety systems fitted as standard include traction control, slide control, wheelie control and a brake control system which works with the mandatory ABS system.

Yamaha’s press blurb explains: “Since its introduction on the R1 in 2015, this six-axis IMU has been further developed, and the unit featured on the new Tracer 900 is now 50% smaller and 40% lighter. “This high-tech IMU device constantly sends data to the ECU which computes all the data in real time, and effectively governs the new Tracer 9’s Traction Control System (TCS) as well as its Slide Control System (SCS), front wheel LIFt control system (LIF) and Brake Control system (BC).”

The traction control, slide control and anti-wheelie controls can all be adjusted within three riding modes; Mode 1 is the least intervention and sportiest riding mode, Mode 2 is a medium and Mode 3 is a manually adjustable setting that lets the rider decide from any combination of three modes – as well as off.

On top of the adjustments available above, there are also four Yamaha D-Modes available ranging from the sporty Mode 1 through to Mode 4 which is specifically tailored to working in the wet Modes 2 and 3 become gradually softer and more relaxed in terms of the throttle and engine response.

One big bonus of the extra electronic rider aids and a ride-by-wire throttle is the ability to easily fit cruise control as it’s simply an additional bit of programming code to make it work. The Tracer 900 cruise control works above 31mph and in fourth gear and above. Any touch on the throttle, brake or clutch will instantly deactivate the system.

Yamaha says that the Tracer 9 has improved fuel economy; largely thanks to the changes made to meet the strict EU5 regulations as fuelling and combustion has to be extremely closely monitored by the bike and, as a result, it runs very efficiently.

Yamaha is claiming a range of over 215 miles from the 18 litre tank as a result of the changes to the engine and fuel injection system. As with the 2021 MT-09, changes to the fuel injection include injectors now mounted on the throttle valve side rather than directly to the cylinderhead as before.

At first sight it appears Yamaha has forgotten the final half of the exhaust system but on close inspection you can see the twin exit silencer is slung under the engine. A weight-saving of 1.4kg is significant and all adds to the overall 2kg lower weight of the 2021 model. Another 0.7kg comes from the new, lighter wheels.

The most obvious change to the dashboard is the fitment of two 3.5in TFT full-colour screens showing all of the relevant motorcycle information. There are also full LED lights from and rear, adjustable rider’s seat which is also 15mm lower than before, adjustable footrests, handlebars and handlebar clamps to give a possible eight different riding positions.

The Tracer 9 GT is the highest specification bike in the Tracer range and gets hard panniers, along with different KYB semi-active suspension which responds to different riding conditions for improved handling.

The semi-active suspension – called KYB Actimatic Damper System (KADS) works with the IMU, the hydraulic unit and suspension control unit to work out the optimum suspension setting depending on speed, wet or dry, how bumpy the road is and whether the bike is being ridden solo or with a passenger and luggage too.

Yamaha’s explanation states: “KADS can be used in two modes: A-1 is the sporting mode that is designed to deliver taut and responsive suspension action for fast riding on dry roads – and can also accommodate wet conditions. The system can be switched to A-2 mode that is designed to give a more supple and comfortable ride on rougher or uneven surfaces, making it the ideal choice on longer and more relaxed journeys.”

The GT model also gets a standard quickshifter which works on both up and down gearchanges, there are LED cornering lights, standard heated grips, and specific colours and graphics.

Yamaha has also announced that the smaller capacity, twin cylinder, Tracer 700 will be renamed the ‘Tracer 7’ for 2021 and that a GT version will be introduced.

The GT version comes with a number of the Tracer’s touring focussed accessories as standard fit, including hard panniers, taller touring screen and a more padded comfort seat. The lighter and less powerful 700cc Tracer can also be ridden on an A2 licence, making it even more accessible for riders looking for an entry level all-rounder.

Both Tracer 9 models will be available from March 2021, with the Tracer 7 GT expected in February.