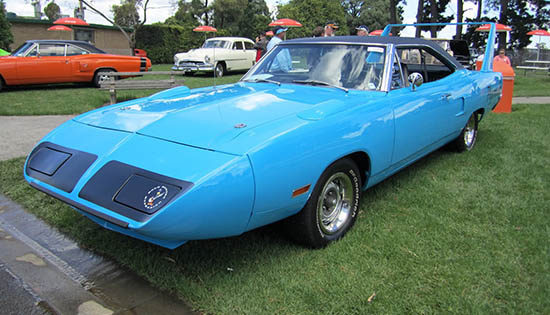 Classic muscle cars have a reputation for being beautiful and powerful. They are ideal vehicles to use for a road trip, whether you’re travelling with friends or family. Muscle cars are defined as being 2-door sports cars that are powered by a high-performance engine. It could be argued the golden era of muscle cars was between 1965 to 1970, but there have been many impressive models built over the years. Here are seven of the rarest.

The Torino Cobra was Motor Trend’s car of the year in 1970 and featured 15 inch Magnum wheels and a V8 engine. With a V8, the Cobra was capable of putting out a horsepower of 370. This translated into reaching 60 mph in 5.8 seconds, making it a powerful vehicle.

Between 1968 and 1969, only 30,000 Pontiac Firebirds were produced. 8 Firebird Trans Am convertibles were ordered and they featured a Ram Air III V8 engine. At the time, this was the second strongest option, with the 345-horsepower Ram Air IV engine being more powerful. The Firebird was a gorgeous car with a sleek bonnet and shiny wheels.

The 1970 Plymouth Superbird is one of the rarest muscle cars of all time, as it was only available for one year. The Superbird was a modified version of the Road Runner. Prominent features included an aerodynamic nose cone, large rear wing and a horn that mimicked the sound of the Road Runner cartoon character. The engine was capable of producing 425 horsepower, propelling the car from 0-60 in 5.5 seconds.

Designed by John Delorean, the Pontiac GTO was inspired by the Ferrari 250 GTO. Pontiac took away a lot of the car’s weight to make it lighter and installed a 455 cubic inch engine. In 1971, a total of 17 were made because Pontiac had to stop producing them. This was due to revised emission standards in the US.

The 1967 Dodge Coronet featured a 487 Road and Track engine and is possibly the rarest model of muscle car in the world. Only two were made in 1967 and another two in 1970. By 1970, the Dodge had been upgraded, with the engine being able to produce 425 horsepower.

The Plymouth Cuda had a choice of five different engines, ranging from 340 to 440 cubic inches. Cudas were fitted with a 426 engine in 1970 and the convertible versions became the most prized. However, there were only 21 convertibles made because the engine upgrade cost £680.

Manufactured as a racing car, the Chevy Corvette L88 was developed in St Louis. It featured a 427 cubic inch engine that produced a horsepower of 435. Only 196 L88s left the assembly line because of increased emissions.