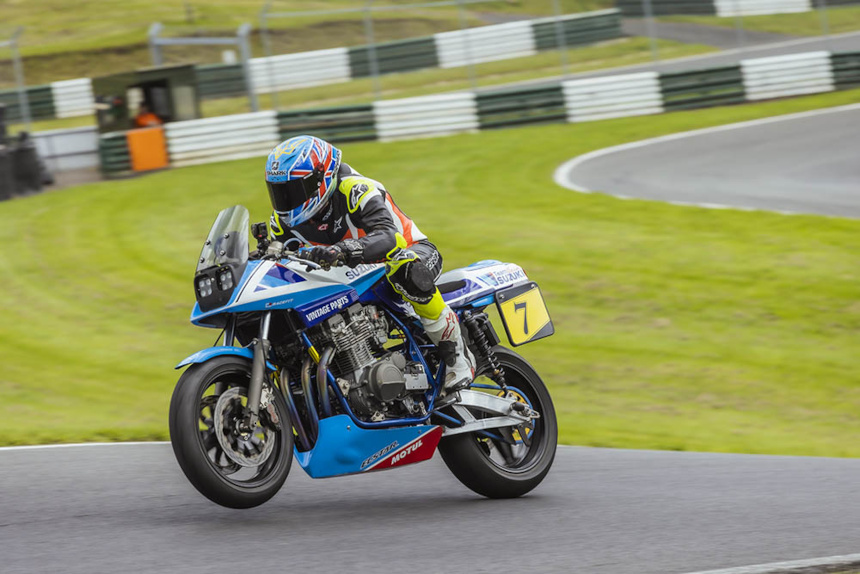 I’m pretty lucky in the fact that every year I get to ride not only the latest and greatest machinery of all shapes and sizes, but also on occasion, some seriously special one-off bikes too. So, when Suzuki called and asked if we wanted to go on their purpose-built Katana race bike? Well, you can imagine how excited I was. I mean, this is no ordinary, modern Katana - this is Team Classic’s Suzuki’s Endurance winning machine.

Now before we get started - yeah, the first Katanas came out long before I was born, but I still appreciate the icon and what it did by setting trends that we still see today.

The original GSX1100S Katana was launched in 1981 and shook the motorcycling world with its futuristic styling. Underneath the sci-fi fairings lay what was a fairly UJM (Universal Japanese Machine) superbike of the era. Grand Prix technology filtering down to the street (ironically led by Suzuki’s own RG500 and GSX-R750) would make the UJMs obsolete by the mid-‘80s and the original Katana was only in the Suzuki range for a few years, but such was the initial impression it remains an icon today. 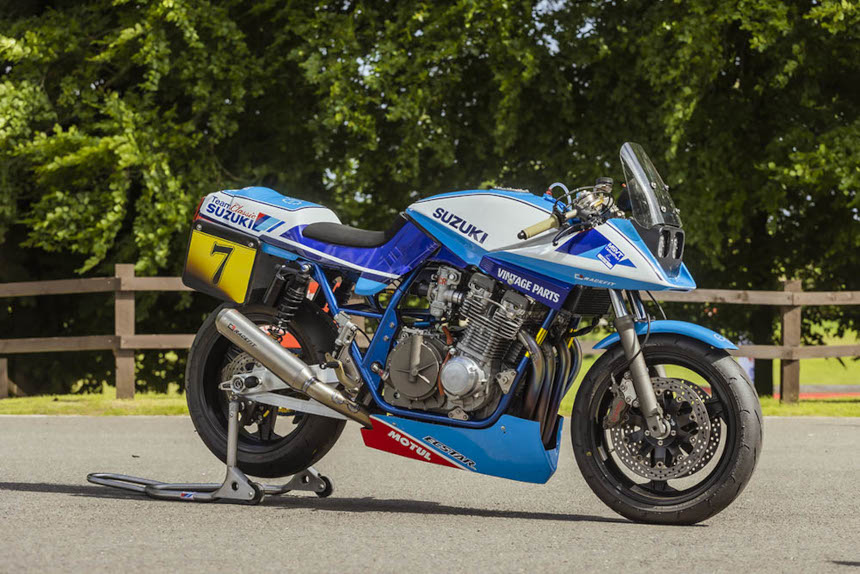 Suzuki revisited the legend by building this absolute weapon back in 2016 to showcase their Vintage Parts programme, creating a serious homage to the original.

And when we say a homage to the original, we mean it. The bike isn’t a 1980s bike that’s been restored and modified for racing. Instead it’s been built out of new parts to classic racing rules, meaning it needs to stick to strict guidelines to ensure it is largely raced ‘in period’ conditions.

This bike was built before the latest generation of Katana saw the light of day, and according to some of the head honchos from Suzuki UK, it might even have provided some of the inspiration behind bringing back the legendary name.

While the Team Classic Suzuki machine utilises the same basic frame as the original, it has been altered slightly with adjustments to the headstock and the swingarm pivot in order to give it a more dynamic feeling on track. On the subject of which, it’s then been given some seriously posh kit to make it handle like a proper racer: it’s got K-Tech suspension front and rear, lightweight Dymag wheels and even a bespoke swing arm too.

It’s not just about the handling either, as although it comes equipped with a GSX1100SD engine, there is barely anything left standard with it. It’s been bored out to 1170cc, alongside getting higher lift cams and stainless-steel valves. They then raided Suzuki’s Vintage Parts programme, literally replacing everything standard including conrods, main bearings and big ends on the rebuilt crank. And the result? Well, you’ve got not just an incredible looking and sounding machine, but a modern take on an icon that has found the top step of the classic endurance podium. 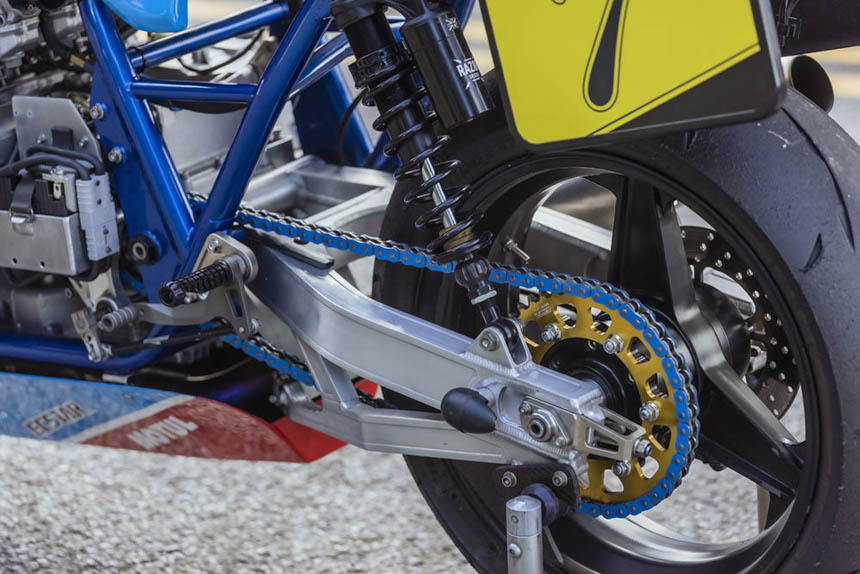 And wow, does it look trick in the metal. Although everything from the top yokes to the tank is bespoke, it still oozes that original Katana style; that sharp front end still looks incredible to this day, and even from afar that silhouette is instantly recognisable.

It looks great in pictures, but it’s up close where you really appreciate the Classic Suzuki team’s efforts, with everything from that beautiful swingarm, to the crisp and clean paint scheme you’d expect from a high quality race machine. I have to say as well, that that exposed engine and bare frame really completes the look, giving off a supernaked, aggressive vibe that some modern machines could only dream off.

The real proof in the pudding comes from the riding experience though, and after some words of wisdom (and a little bit of a warning!) from former British superbike champion John Reynolds it was time to head out. Compared to modern machinery, the Katana is a hefty looking beast, and even with those chassis updates it’s still fairly long by today’s standards.

Jumping on, the size really does make itself clear; it’s high, it’s lengthy and even though there’s loads of room (endurance racing machines tend to be a bit comfier as the riders endure longer stints in the saddle), the thing that got me was just how tight the handlebars sit. Their position feels like an old school 125cc Grand Prix bike, which lends itself to a more traditional riding style.

With a quick hit of the electric start, the Katana roared into life and that growl from the Racefit exhaust really did make me smile, although how it passed Cadwell Park’s 105dB noise limit is anyone’s guess. I’ll be honest with you here though, I did stall it on my first attempt of leaving the paddock, as the clutch was one of the most sensitive, and stiffest I’ve felt in years. It feels more like an on/off switch, than a progressive lever.

Roll out on track and the first thing that hits you is the spread of torque from that heavily modified motor. From the very bottom of the rev range it pulls like an train and, as the peak power seemed to top out fairly quickly, it was more than happy to pull a gear or two higher than I’d expect. This was good, as the second thing that got me was just how hard getting gears was.

Not only was the gearbox incredibly stiff, which meant that I had to be super precise in getting my timing right, but the throttle and clutch were incredibly heavy too.

Although it’s a recently built machine, it felt every bit a bike from the 80s, requiring an incredible amount of power through the wrists for the simple commands that we take for granted these days. After a few laps I’d already had a bit of arm pump and was begging for the sort of innovations that come as standard on current machinery; a quickshifter and a hydraulic clutch would’ve been top of my list, but it gave me extra admiration of just how superbike riders had to manhandle their bikes back in the good old days. 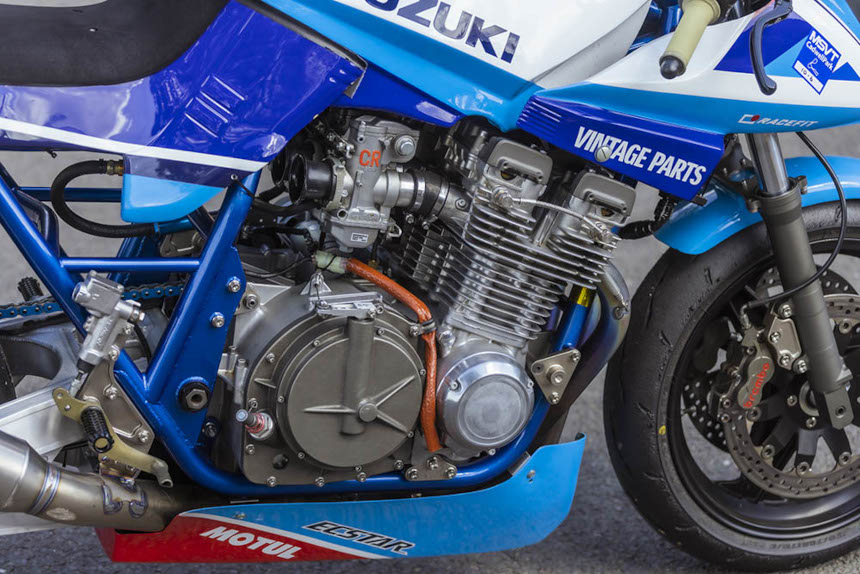 Saying that though, one aspect where the Katana didn’t feel old was in its cornering abilities. A combination of geometry changes, sticky rubber, proper suspension and lightweight wheels meant that the Team Classic Suzuki Katana felt every bit a winner when it came to tackling the twisties. There was loads of feel and power from the brakes, and it tipped into corners with surprising amounts of urgency – it almost fell into the apex with incredible accuracy. In fact, I was surprised that even though it has a long wheelbase, it changes direction impressively too.

Original Katana road bikes rolled on skinny-tyred 19” front wheels, so I would suggest those modern BST rims make a massive difference. Don’t get me wrong, it still takes a bit of muscle to get it moving, but with every lap I was getting more used to the Katana and was able to keep pushing it harder as well. Even though it knackered me out, I was genuinely sad to see that chequered flag.

All in all, riding the Team Classic Suzuki Katana was an incredible experience. It really had the spirit of the original but everything about it felt so much more refined, and with every lap it gave me more confidence, even though it really didn’t come easy. Sure, it didn’t have bucketloads of power or the finesse of a modern track bike, yet it wasn’t as far off as I expected and by making me work harder than I’d expect to reap those rewards, there was a real feel-good factor too.

There’s one thing that’s for sure though, which is how the Katana reminded me just how hard it was riding these old-school icons fast, and how blessed we are with modern innovations and tech. As much as love sampling history, the latest machinery is so much easier to peddle around a racetrack.  We’re spoilt these days…