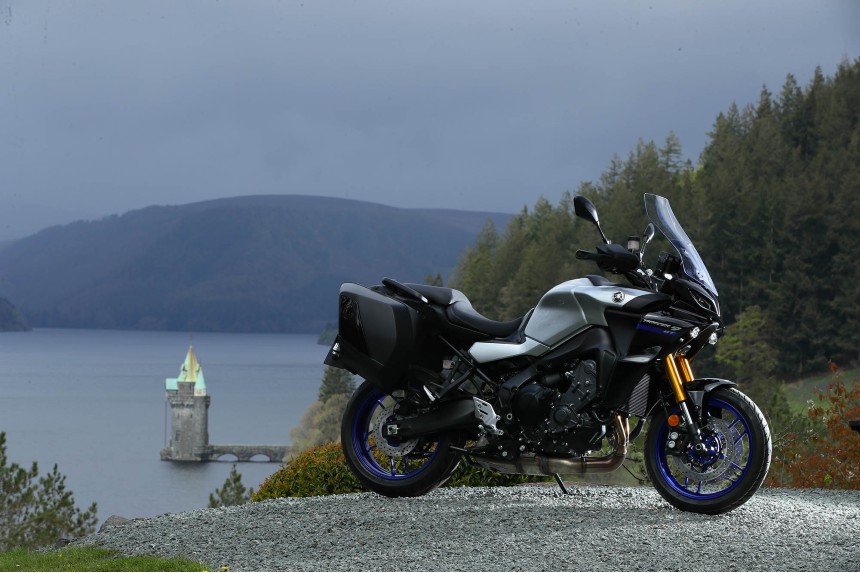 The Tracer range has been a massive part of Yamaha’s sales success in recent years, and for good reason too. Not only have they been fairly priced, but the 900 in particular is a genuinely capable mile muncher with a little zest of sportiness thrown in for good measure, thanks mainly to that gorgeously revvy, three-cylinder CP3 motor.

But then again, there’s always room for improvement, and Yamaha seemed to think that there was a fair bit of room, as over 90% of the 2021 model is brand spanking new – just like the MT-09 range with which the Tracer shares so much of its platform with.

For starters the 2021 incarnation of the CP3 motor is not only 42cc bigger, thanks to a slightly longer stroke, but heavily reworked too, with everything from forged pistons to repositioned fuel injectors. This means that the new Tracer makes 6% more torque, 1,500rpm earlier, as well as 3% more peak power.

Despite the performance hike, the Euro5 compliant motor is 9% more efficient as well, which is especially welcome on a sport-touring machine designed for long runs between the fuel station. Compared to the MT-09, it gets a longer first and second gear, which should make the Tracer a little more docile in compared with its crazy naked cousin.

And talking of the MT, it also shares that glorious new chassis setup: lighter, stiffer and stronger than last year’s model, with a 30mm lower headstock and an engine placement that’s 5 degrees more vertical too.

This means that the package can be just as compact as before, but incorporates a longer wheelbase than the previous generations thanks to a new lighter swingarm that’s 64mm longer than on the MT. It creates more stability and makes the machine a lot less flighty. It also comes equipped with lighter 10-spoke wheels, and bespoke Bridgestone T32 GT tyres in a compound that’s been specifically developed for this bike.

To top things off, Yamaha have then gifted it a full electronics suite, including a host of rider aids and riding modes that’s fed into a six-axis IMU, and fired back at the rider through a new fighter-jet styled twin TFT dash.

They’ve also evolved the riding position for a comfier stance, and given the new Tracer 9 adjustable footpegs, handlebars and seat, with the latter being just a simple twist of the key for a 15mm height difference. There’s also a revised screen, side fairings and hand guards setup for additional wind protection, new luggage options and a whole host of accessories too.

As we were going to be jumping on the top-level GT version, it also comes equipped with semi active Kayaba suspension, cornering LED headlights, a quickshifter/autoblipper, heated grips and a higher-grade design seat and panniers too. It costs £12,202, which is £2000 more than the standard model. So how would it cope for a road trip to and around Wales? 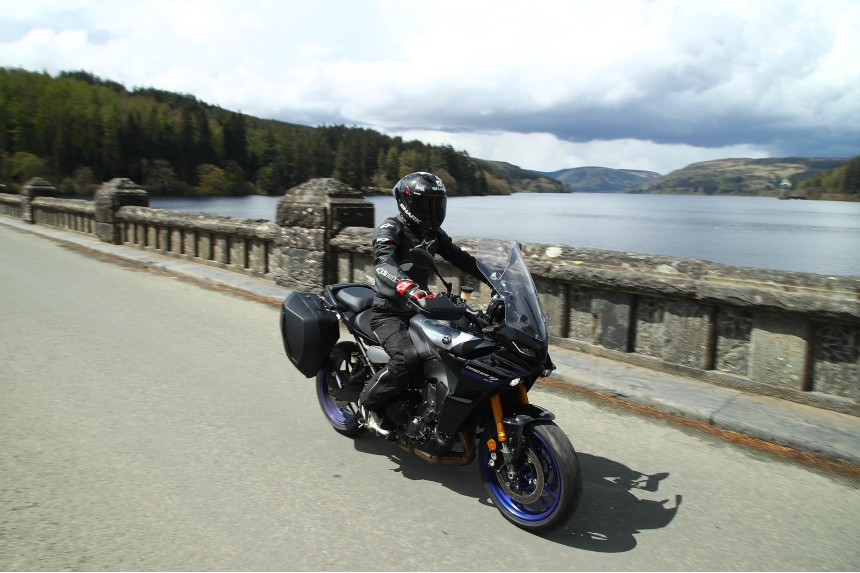 In my opinion, the ’21 Tracer 9 GT is a smart looking machine, as although it’s principally a tourer, it’s got a really sharp, sporty stance to it as well. As I’m on the shorter side of the spectrum I opted to have my seat height at its lowest point (810mm) and jumping on for the first time was a nice surprise to find just how low, narrow and manageable it feels.

The panniers are easy to use and offer a fair amount of space, and even if you’re built a bit bigger, the riding position is incredibly roomy so will more than accommodate a larger frame too. Looking down, everything is nicely finished and positioned although I think the twin-screen dash set-up does look a bit strange. Thankfully, when switched on it’s incredibly useful and easy to navigate, so all is forgotten.

My favourite part of the Tracer 9 has always been just how good the engine is, but thanks to that huge array of updates, it’s now better in near enough every way. As expected, it works a treat as a sports touring package, as the extra power and torque makes it really exciting for getting a bit of a move on, but the slightly longer gearing down below make it soft if you don’t want to go crazy.

Sure, it still has the same DNA when throttling on, but considering there’s very minute differences between the two, it really does feel that little more grown up compared to the set-up gifted to its hooligan naked brother, the MT-09.

The thing I love about it is that it’s so easy, smooth and quiet to bumble along with without feeling peaky at all, yet when the taps are opened it obliges with incredibly excitement, almost as if it has a split personality. The only thing I'd like is a slightly longer sixth gear, as it does buzz ever so slightly at motorway speeds.

Aside from that though, it’s a real treat to ride at motorway speeds. The Tracer 9 GT is an incredibly stable machine but, then again, it hasn’t chucked all of its handling prowess out the window. The semi-active suspension works an absolute treat in the corners too, providing a really responsive and intuitive ride, and loads of grip (especially in the wet) from those specially developed Bridgestones.

Out of the whole handling package, the only thing that I was bit miffed with was the fact that even though the suspension is electronically adjusted, I had to adjust the preload manually to compensate for passengers and a pillion, which is a minor inconvenience.

As can be expected on a latest generation Yamaha, the electronics are impressive too. They offer just the right level of interreference on the lower settings, especially in the wet, but the cruise control and heated grips really are sublime – both are easy to use and incredibly effective, and make for a pleasant ride no matter what the conditions. Especially so as even after a full day in the saddle, I didn’t feel sore or achy, and thanks to the wind protection, handguards and refined side fairings, I was quite protected from the elements too. 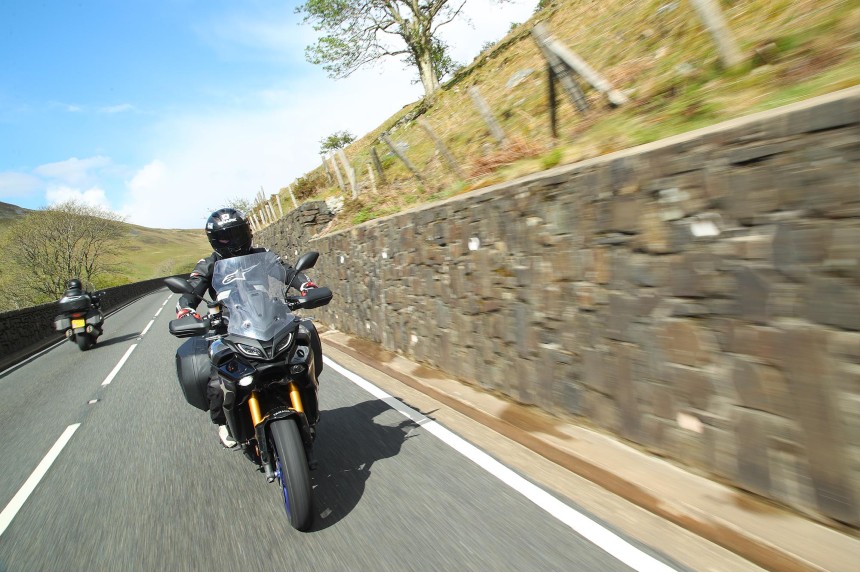 The Tracer 9 GT will set you back £12,202, but in all honesty, it feels like two bikes for the price of one; it's comfortable and poised enough to munch the miles, but it has a seriously fun side that could make a few sportier bikes twitch, both in terms of its handling and its performance. It feels better than the old Tracer 900 in near enough every way, and although it does have a few foibles, Yamaha really have made their Tracer 9 platform an even better machine, and still for a cracking prize.