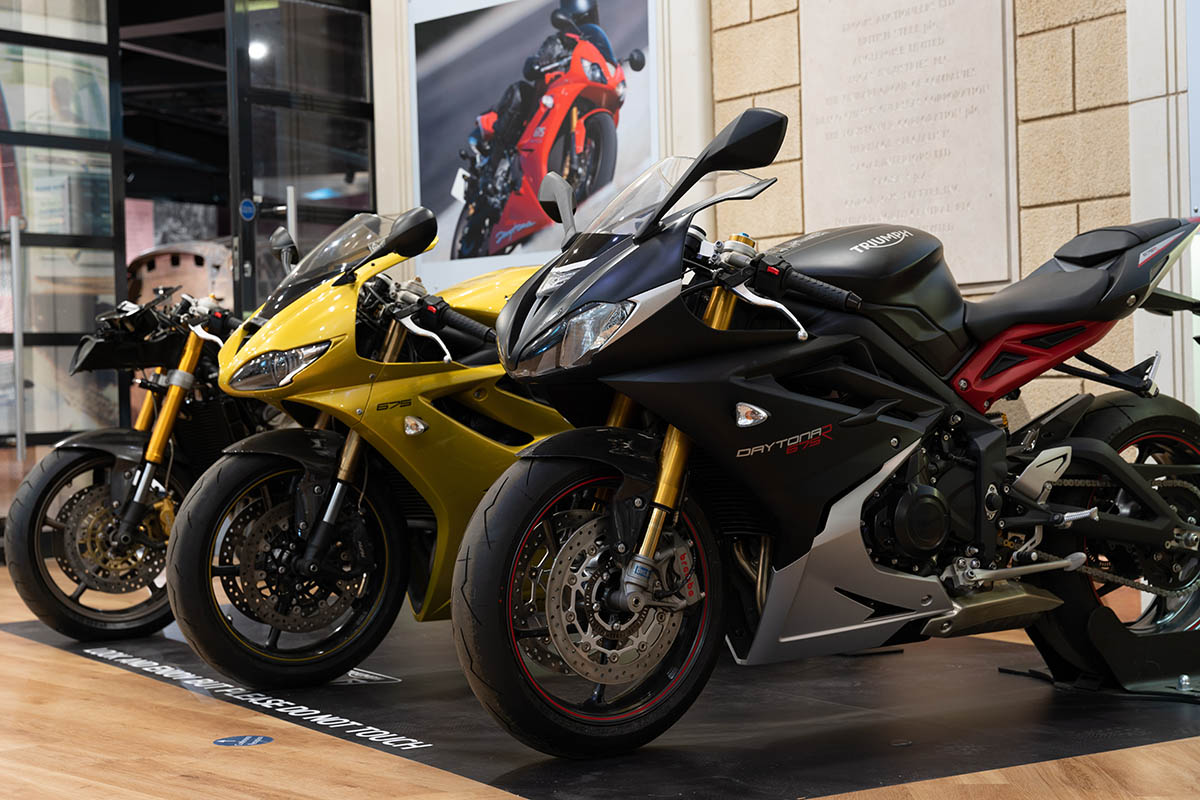 Numerous manufacturers have named their wares following successes at the Floridian venue and, in the motorcycle world, none more famously than Triumph.

Somewhat ironically the British brand has rarely been passionate about racing its motorcycles, but when Buddy Elmore won the 1966 Daytona 500 riding a modified Tiger, the factory responded by developing a hotted up street bike called the T100R Daytona for 1967.

On sale until 1974, the first Daytona used the two-cylinder Tiger at its base but featured a tuned cylinder head and twin carburettors to push power up to over 40bhp.

When the brand was revived in 1990, the Daytona nameplate was applied to the sportiest models in the range from the outset. With the market for new sport bikes all but dead, the Daytona name has been phased out in recent years, but with the British Motor Museum currently running an exhibition devoted to Triumph’s raciest model we decided to take a look at five of the very best Daytonas from the over the last three decades. 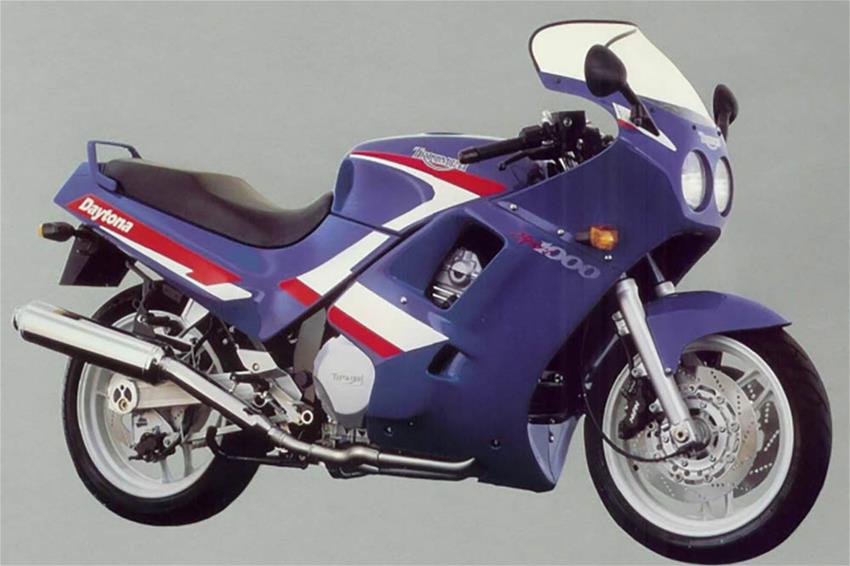 Triumph came back with an all-new range of motorcycles for the 1991 model year following years in the wilderness.

Under the stewardship of Midlands builder John Bloor, the company set up on the outskirts of the Leicestershire town of Hinckley and set about designing a brand new line up of motorcycles.

A modular design, known internally as the T300 series, saw three core styles share the same frame, while the engines came in three and four-cylinder configurations with long and short stroke variants for four different capacities.

The Daytona was the sportiest of the trio (in a range that also included the Trident roadster and Trophy tourer) and used the short stroke motors, creating 97bhp 750 and 120bhp 1000 versions.

These first gen Triumphs were well engineered but were big and bulky, and felt a few generations behind the Japanese competition to ride. The short stroke motors only stayed in the range for two years, before the Daytona switched to the more popular long stroke engines, the 900 triple and the 1200 four.

In truth, these weren’t the greatest bikes in the world. The Trophy was a better all rounder and pretty much all the Japanese competition made better sports bikes, but this represents the genesis. Without these building the brand’s reputation for solidity, it is hard to imagine we’d have the Triumph we know and love today. 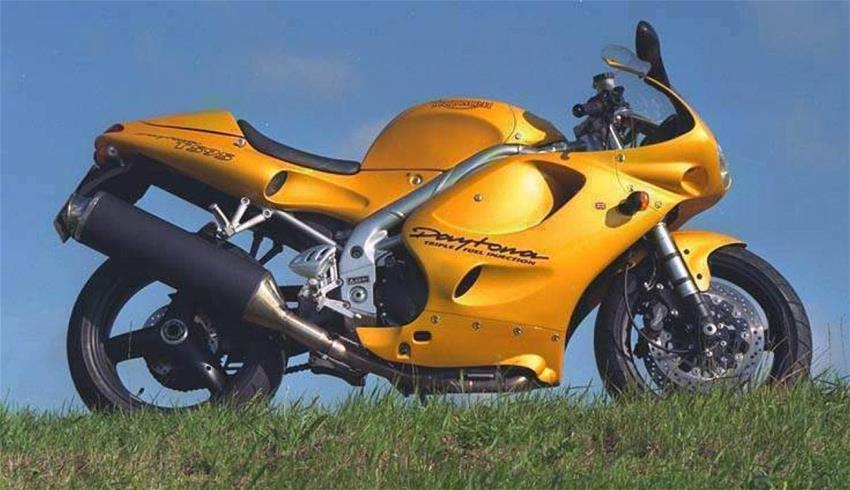 By 1997 Triumph had a reputation as a builder of solidly engineered motorcycles but, a bit like BMW, they were seen as a bit frumpy and not exactly at the cutting edge. The T595 aimed to rectify that. Whether it did or not is a matter for endless debate but, one thing is for sure, it was a step forward and represented an important point in Triumph’s history.

Known by its factory development code, T595, the 1997 Daytona broke with Triumph’s modular production technique. The distinctive frame was all-new, while the 130bhp motor  was fuel-injected and developed in conjunction with Lotus.

It was a pretty bike and while it lacked the ultimate performance of contemporary sportsbikes like the Ducati 916 and Honda FireBlade, it was competitive and had the unique selling point of the three-cylinder engine.

The arrival of the new generation litre bikes like the Yamaha YZF-R1 a few years later completely eviscerated any idea that the Daytona could cut it at the pinnacle of the superbike market, but it evolved into a very usable fast road bike.

The T595 name lasted just two years, being replaced with a clearer 955i designation on the updated 1999 model. It gained more angular lines, in keeping with the Triumph design language of the time, and more power (149bhp). It dropped out of the range in 2006, with the Sprint ST1050 more or less fulfilling the Daytona’s role as a quick and composed road bike. 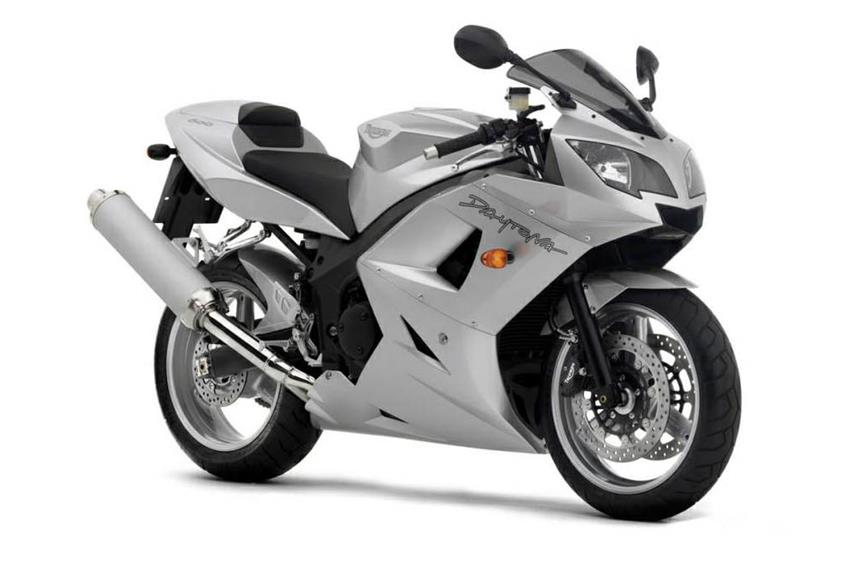 The late 1990s was a confused time for Triumph. Having established themselves with the modular range, they looked to get in on the mainstream and nothing was more mainstream at the time than 600cc four-cylinder sports bikes.

The TT600 was Triumph’s bike for the new millennium, but was something of a flop and arguably the low point of Triumph product development. Jelly mould styling and shell suit graphics made it feel like a Honda CBR600F clone, and while it handled well enough the fuel injection was shocking – making it jerky and thoroughly unpleasant to ride.

Its replacement was this, the Daytona 600. Introduced in 2002, underneath the skin was an improved version of the TT600. Overall it was a much better bike, but with Japanese machines like the Yamaha YZF-R6 and Suzuki GSX-R600 really accelerating development in the class it was another Daytona that was constantly playing catch up with the competition.

But the Daytona 600 deserves some credit because it got Triumph back winning races. Unlike the Japanese manufacturers, who showcased their products in the white hot competition of World Supersport competition, Triumph’s more modest race programme stayed closer to home with national supersport and Isle of Man TT racing.

Bruce Anstey gave Triumph its first TT win in 28 years, at the 2003 Junior TT, and exciting young racer Craig Jones won the Daytona 600’s last British Supersport race at the end of 2004. It also scored points at world level, when Jones finished 12th at the Silverstone World Supersport round as a wildcard entry.

The Daytona 600 was discontinued at the end of 2004, when Triumph went down the Kawasaki route of stroking the engine to make the Daytona 650. Like the 955i, the Daytona 650 was a good sporting road bike. It only lasted a year in production and marked a turning point as Triumph’s last four-cylinder machine. 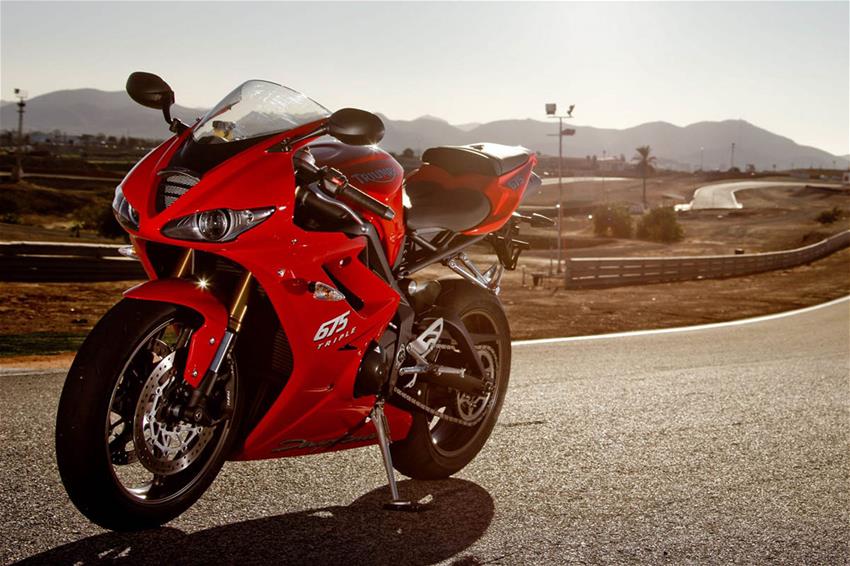 If Triumph’s dabble with the supersport class had previously fallen short, that was all about to change in 2006.

The famous factory fire of March 2002 had seen a slowdown in production and a chance for company bosses to look at what made Triumph special. One of the key takeaways was the need to focus on twins and triples, and the need to stop competing head to head with Japanese four cylinder machines. So, out went the Daytona 650 and in came this, the Daytona 675.

Instead of copying others, the Daytona 675 (or Daytona 675 Triple as it was known at launch) was a mid-capacity sportsbike designed without constraint of racing rules or conventions.

And it was sensational. The 675 matched the Japanese on the spec sheets and was every bit as good on road and track. What’s more, it was incredibly handsome, had a soulful engine and for the first time ever gave Hinckley Triumph a motorcycle that could be classed as world beating.

An update came in 2010, tweaking an already winning formula, and the Daytona 675R of 2011 featured fancy suspension from Ohlins and Brembo brakes.

An all new Daytona 675 arrived in 2013 but, unusually, was not universally considered to be an improvement over its predecessor. The short stroke motor was less tractable, while the near collapse of the supersport market saw sales stutter and marked the beginning of the end for the model.

Although not initially eligible for racing, rules were quickly opened up to allow triples to compete in supersport racing. Once again, Triumph focussed its race programme on the UK and Isle of Man TT – and it won in both. There were some privateer entries in world supersport racing, with top riders like Garry McCoy and Chaz Davies scoring podium finishes but failing to get that elusive win. 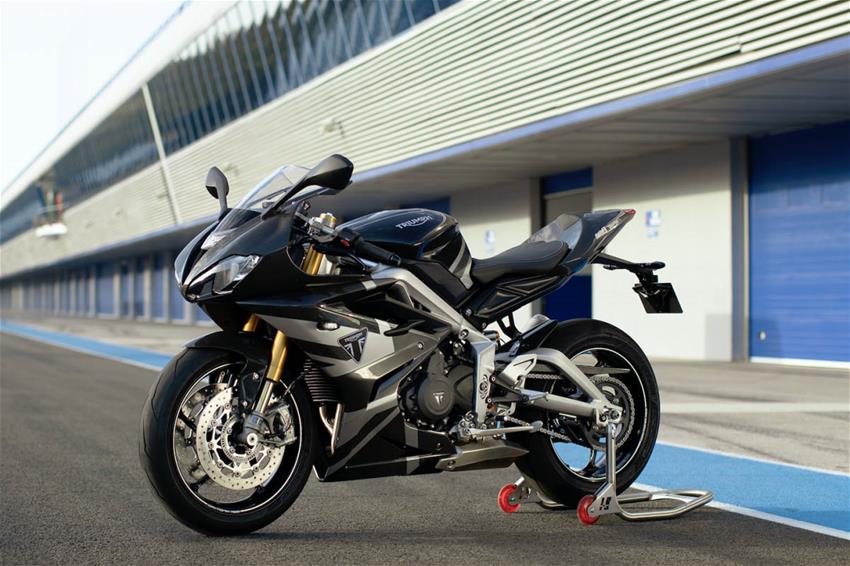 The Daytona 675 proved something of a stalwart of the Triumph range but was quietly dropped in 2018. New emissions rules meant that updates were required to keep the Daytona on sale but, like their competitors, Triumph bosses decided that the tiny demand for supersport machines meant that they were no longer viable.

But around the same time Triumph was surprisingly announced as the spec engine supplier for the Moto2 race class, taking over from Honda in 2019 with a powerplant based on the Street Triple 765RS’ motor.

So, to celebrate, Triumph dropped the 765 engine into the old Daytona chassis for one last hurrah. The 128bhp triple cost a whopping £15,765 when it went on sale as a limited run (of 1530 worldwide) but had a premium spec including carbon fibre bodywork, Brembo brakes and Ohlins suspension. Sadly, for some, it never led to a permanent, more mass produced model, but it proves a fitting legacy to one of Triumph’s most famous (and now defunct) nameplates.

The British Motor Museum is currently hosting a special exhibition, called ‘The Legendary Daytona Motorcycle’ featuring a number of historically important Triumph Daytonas from throughout the years.