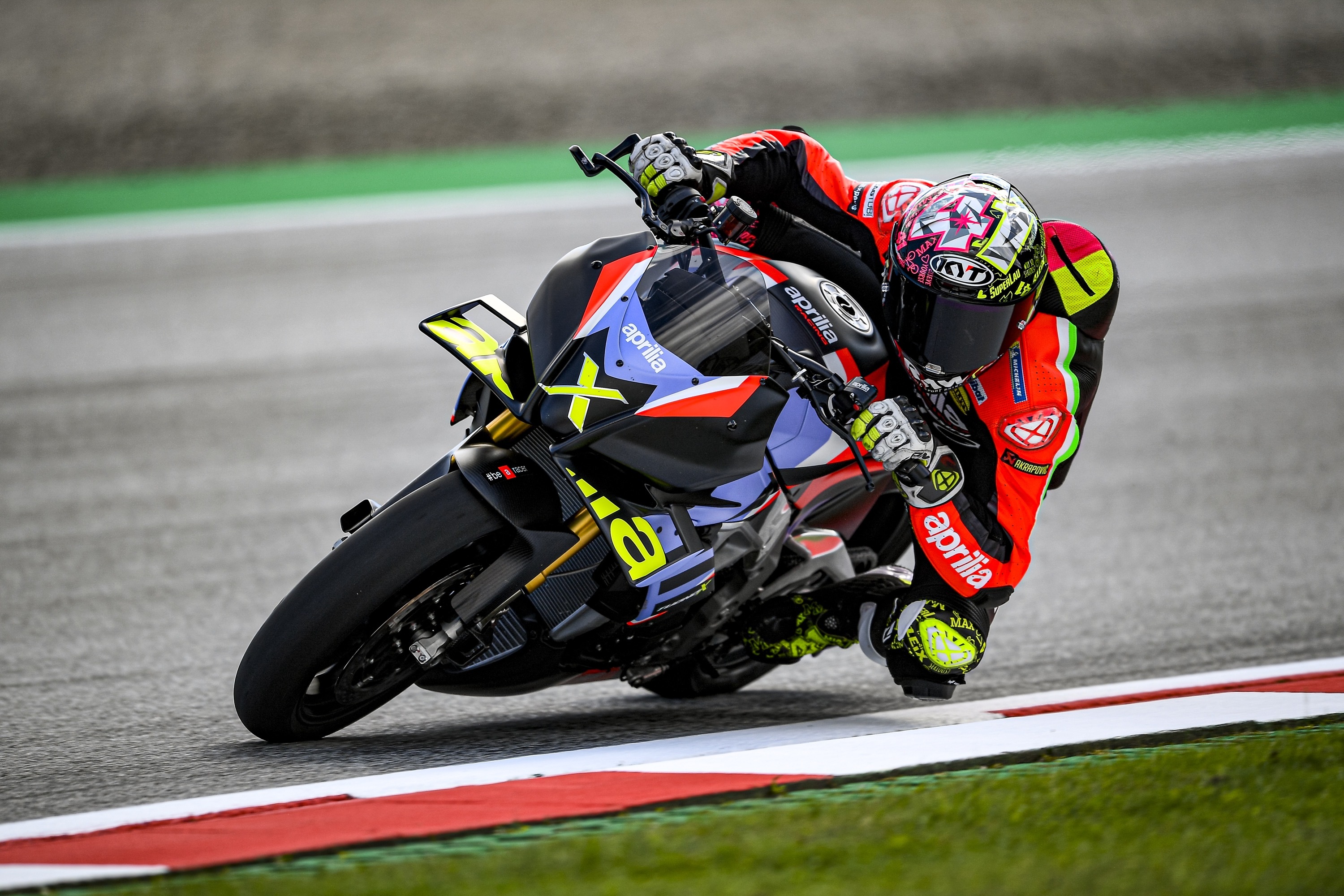 Built by the Italian company’s racing department, only 10 were slated for production and all were sold out within hours. Now Aprilia is looking to replicate the success of the RSV4 X by building a supernaked version, the Tuono V4X.

As the RSV4 and Tuono V4 are close relatives to start with, it’s no surprise that the naked X shares the majority of its DNA with its faired cousin. The 1077cc motor knocks out a claimed 221bhp at the crank and features a treasure chest of electronic aids to keep it on the straight and narrow, however it’s the Tuono’s extreme diet that is arguably the most impressive thing about this £31k slice of exotica. Aprilia have shed 18kg from the range-topping Factory V4’s already excellent 184kg dry weight and much of that has been achieved through the extensive use of carbon fibre.

The Tuono V4 X gives an insight into what a supernaked racing class might look like. Aprilia MotoGP test rider Lorenzo Savadori is reported to have lapped Italy’s classic Imola circuit in the 1:50s bracket, just a few seconds off the pace of a world superbike, despite the high handlebars and the lack of an aerodynamic fairing, and he was, understandably, full of praise for the bike, saying: “It is the most fun bike I've ever ridden. In my opinion, the mix of comfort and performance is unique. The insane engine is also easy to manage, both for experts and novices, and the aerodynamics package provides incredible stability for a naked. I think that the Tuono V4 X has once again created a new segment.”

As a track-only bike, road going gear like lights and the horn have been dumped, while all of the bodywork is in carbon. The magnesium forged Marchesini wheels are shod with Pirelli superbike slicks, while other components pared to the bone include the clutch lever, footpegs and fuel cap, which are all machined from billet aluminium. The exhaust system has been created by Akrapovic and features titanium collectors and a carbon fibre end can.

Probably the most distinctive feature of the Tuono X is the huge MotoGP style aerodynamic wings, which should help with the bike’s high speed stability, as well as reducing power wheelies and aiding braking performance.

Aprilia MotoGP rider Aleix Espargaró rode the Tuono X around Austria’s Red Bull Ring for these promotional photos and he said: “The Tuono V4 X is out of this world. I had never tested a high-handlebar bike on the track and I was surprised at the feeling of stability. The engine is insane, but the chassis architecture doesn't struggle - to the contrary: the riding position and the electronics make it extremely fun. You can ride it cleanly, but you can also drift with it if you want to. It is a pure sportbike with a hooligan side!"

Aprilia say that each Tuono X is hand built alongside the MotoGP bikes in their race department and that numbers will be limited to 30, with the first batch of 10 already reserved.

Fancy one? The price is €34,900 and they can only be reserved online, through Aprilia’s website. Buyers can opt to pick the bike up directly from the factory, allowing for a tour of the usually secretive Noale, racing department in Noale, and the price also includes a KYT NX-Race helmet, with graphics inspired by those on the bike.