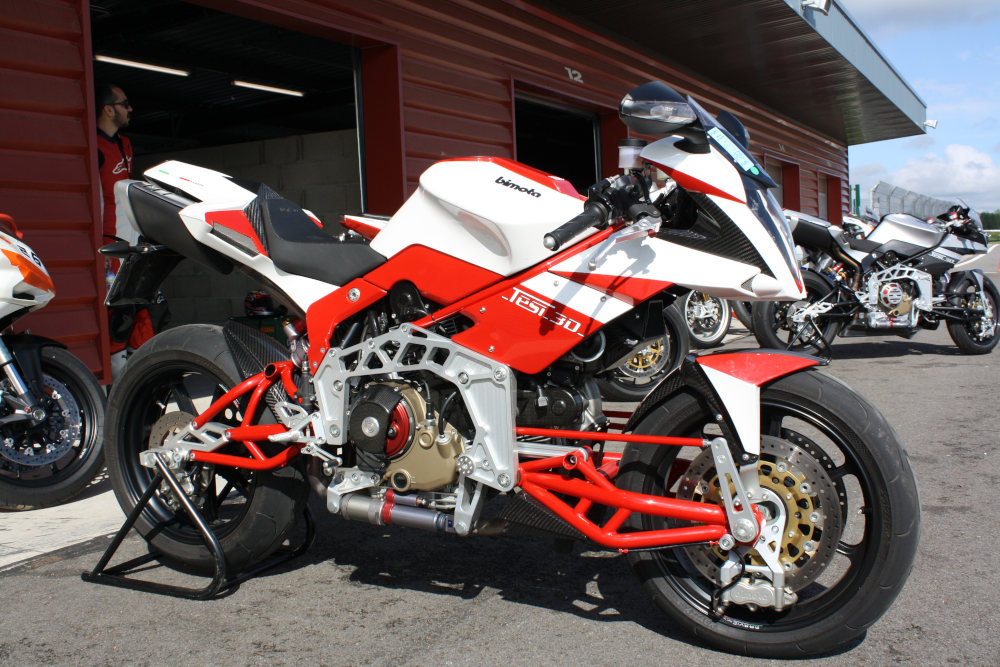 Based on the `ordinary´ RSV Mille, the R variant features uprated suspension for more track orientated riding and a re-chipped incarnation of that fabulous 60 degree, four stroke Vee engine.

The SP, just as you would imagine, takes the Mille to something approaching race ready performance, featuring an adjustable chassis so that the rider can really get the bike set-up perfectly for any given circuit. At a wallet denting £20K or so, perfection doesn´t come cheap, but if you want the very best…

Still perhaps not quite as beautiful as the Ducati 996 to look at, but either of these Mille variants will more than a match for the Italian classic from Bologna.

It must be one of the world’s best and most challenging sections of racetrack. Coming up to end a lap of the new Valencia circuit, you accelerate though a long, sweeping fourth-gear left-hander over the brow of a hill, then hit the brakes and come down two gears for a fiendishly difficult left-hander that leads onto the long start-finish straight.

Racing a works 500cc grand prix bike through here, painting black stripes with the rear slick through that fast, blind curve before outbraking a rival into the last turn then powering onto the straight in front of thousands of screaming spectators, must be mindblowing. Battling for the lead in a world Superbike race, as Aprilia hopes its new team riders will be doing when next season’s championship opens on this Valencia circuit, would be awesome too.

And if you’re not a top-level racing star, roaring past empty grandstands to complete a lap of the Valencia track aboard the new Aprilia RSV Mille R is pretty magical and about as close as you’re likely to get to the real thing. The way the black V-twin thundered over the brow of the hill, rock solid as my left knee kissed the tarmac at about 100mph, then shed speed before flicking effortlessly and with great precision into the tight final turn, convinced me of that.

Giving ordinary riders a taste of the works-racer experience is what the Mille R is all about. With its black paintwork and single seat the Mille R looks very like both Aprilia’s full factory Superbike racer and the ultra-exclusive SP version that was released a few months ago. But while even the SP is intended strictly for professional racers, the Mille R has been built to be ridden at a slightly more down-to-earth level.

This bike, the third in Aprilia’s string of super-sports V-twins, is positioned between the standard Mille and the SP as a more accessible but still track-ready machine. It shares the basic model’s engine and frame, so doesn’t have the SP’s adjustable engine position and swing-arm pivot, or its more powerful, hand-finished motor. What the R does offer is most of the SP’s performance and specification at a much more affordable price.

The 998cc, 60-degree V-twin motor has a few new features, which are also incorporated in the latest version of the standard Mille. Its fuel-injection mapping is tweaked to improve low-rev output and smoothness. And the clutch system is revised with braided hose, new plates and lighter spring pressure at the handlebar lever. The dohc eight-valve motor’s claimed peak output of 128bhp at 9500rpm, and its maximum torque figure of 10.5kg.m at 7000rpm, are unchanged.

Although the R’s aluminium twin-spar main frame sections are identical to those of the standard Mille, the single-seat model saves weight with a smaller aluminium rear subframe. Fork yokes are not adjustable for rake and trail, as on the SP, but they hold identical 43mm upside-down racing forks from Ohlins, complete with anti-friction titanium nitride coating on the sliders. The Swedish firm also provides the twin-chamber steering damper mounted transversely at the steering head.

Rear suspension is also by Ohlins, as on the Mille SP (the standard RSV has Showa forks and a Sachs shock), although the R’s shock is internally modified to suit its standard rising rate linkage. Both mudguards are made from carbon-fibre. Further weight-saving comes from a lighter battery and from the fuel tank, which is made from a resin that also has the benefit of being very tough.

It’s wheels are arguably the Mille R’s most high-tech new feature, as they are made from forged, rather than the normal cast, aluminium. Aprilia says this allowed them to be as light as magnesium wheels (and 25 per cent lighter than conventional forged aluminium equivalents), without the more exotic alloy’s drawbacks of expense, corrosion and possible porosity.

That and other weight-saving efforts bring dry weight down to 185kg, which is 4kg down on the standard Mille and light by big twin standards. A carbon-fibre instrument surround saves a few more grams but the cockpit view and riding position are otherwise familiar. At 825mm the seat is high enough to give short riders some trouble, but being tall I was glad that the RSV felt roomy as I rode out onto a Valencia track that was still a bit damp after overnight rain.

Immediately the big V-twin engine felt brilliant: smooth, flexible, and plenty powerful too as it stormed forward in response to every tug of the re-routed throttle cable. On a racetrack it’s difficult to get much idea of performance at very low revs but the eight-valve twin’s thunderous midrange torque, and its ability to pull hard out of every corner in a choice of gears, helped make learning the tricky track relatively straightforward despite the conditions.

Not that those first few laps were particularly enjoyable, because even after I’d scrubbed-in the RSV’s new Pirelli Dragon EVOs, the bike continued to feel surprisingly twitchy and unstable as I leant it cautiously into turns. The feeling was slightly strange, and I wasn’t the only rider who pulled into the pits after a handful of laps to bounce on the suspension and check that the tyres were okay.

The bike was fine, and the solution simple: just ride the thing harder. At a hesitant, damp-new-track pace the race-ready Ohlins forks and shock hadn’t been using most of their travel, and the super-soft, Corsa-compound Pirellis had barely had a chance to get warm. Once I started braking later, tipping the Aprilia more aggressively into the by-now almost dry bends, and getting some heat into the rubber, the RSV was transformed.

All of a sudden it was clear that, far from being hard to ride, the tall, grunty and very forgiving Aprilia was just about the perfect bike for having fun on an unfamiliar racetrack. The motor continued to be a gem. It stomped out of the turns with a lazy feel but an impressively high rate of acceleration, occasionally revving hard enough to hit the 10,500rpm limiter before I’d had time to flick up through the sweet six-speed box in response to the flash of red warning light in the cockpit.

Throttle response was excellent; superbly crisp yet without a hint of the snatchiness of some fuel-injection systems. (Ironically, Kawasaki’s carburetted ZX-9R was being criticised for abrupt throttle response on its launch almost simultaneously.) Aprilia’s on-board electronics revealed the RSV was reaching almost 150mph on the start-finish straight, with about 20mph to come given more room. The motor’s twin balancer shafts kept it smooth at that speed.

Slowing was no problem either, thanks to an uprated Brembo front brake system with more power than the original Mille’s rather disappointing set-up. The 320mm front discs are now attacked by the latest four-pot Gold Series calipers, plumbed with braided hose. And Aprilia has followed its grand prix practice by machining the caliper attachment pins from forged billet, to increase rigidity. I’m still not sure that initial bite is quite as sharp as that of, say, a Yamaha R1, but the Mille R slowed hard with plenty of feel and no fade. Handling was the R’s star turn, as you might expect from a light, rigid machine with such classy cycle parts. Aprilia got a bit of a shock on the Mille SP press launch a few months ago, when most testers struggled to get the infinitely adjustable racebike set up. In contrast, once the track had dried the R felt pretty much spot-on from the word go, with little need for suspension tweaking.

The V-twin’s geometry is not particularly radical, with 24.5 degrees of rake, 95mm of trail and a 1415mm wheelbase. But it snapped into the turns with minimal effort at the handlebars, helped by the lightweight front end’s reduced inertia. It steered with a nicely neutral feel through the circuit’s numerous slow-speed turns, and was unshakeable through the penultimate left-hander that is the closest thing the Valencia track has to a high-speed curve.

Dialling-in a touch more compression and rebound damping to the Ohlins shock gave the rear end a slightly tauter feel, while the standard front end was fine for passing on heaps of feedback from the 120/65-section front Evo Corsa. The front tyre had a tendency to wear rather rapidly given sufficient abuse (the alternative 120/70-section Corsa might prove better in this respect). The 180/55-section rear provided massive grip in the dry, and recovered well after stepping out on a treacherous damp patch early on.

Despite its racy attitude many people will buy the Mille R mainly for riding on the road, where its blend of effortless power, light yet stable handling and excellent build quality would make for a very impressive sports bike. At £11,094 on the road the Mille R is only about £1400 more expensive than the standard RSV, which is a pretty reasonable price premium given the benefits of its suspension, wheels, brakes and added carbon.

And that is even more true for riders considering racing Aprilia’s V-twin, particularly in the SuperStock class (which is likely to exclude limited edition exotica such as the SP). This black bike might not have the £20,000 Mille SP’s hand-finished engine or limitless potential for chassis tuning. But its engine is powerful and strong, the R is bristling with classy cycle parts, and it’s a total blast to ride. Professional racers and lottery winners should insist on an SP. For everyone else, the RSV Mille R will surely do just fine.

Get Aprilia bike insurance for the aprilia the rsv mille r.