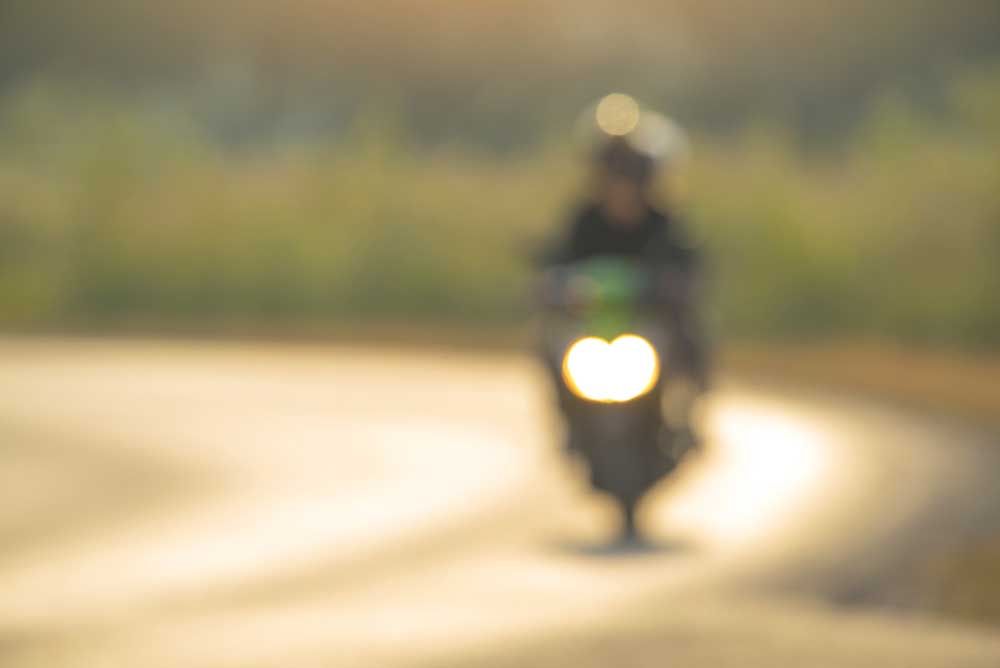 Many years ago there was a German scooter called the Einspur Auto, which literally translated means single-track car.

That concept never caught on back in the 1950s, but in the traffic clogged 21st century, many of us may well end up commuting in something similar to the BMW C1.

With an egg shaped safety cage, seatbelts and helmet exemption (in Germany only, so far) the C1 isn’t aimed at motorcyclists. It is designed to tempt car drivers away from their little boxes and into a brave new world of shorter journey times, inside what is undoubtedly the safest scooter ever made.

Odd looking, heavy, expensive, limited carrying space – the C1 has its faults. On the other hand, it’s unlikely to be troubled by leaves on the line…

The view behind is so strange that it’s impossible not to smile. I’m accelerating out of a bend in the hills near Marbella in southern Spain, gripping a pair of handlebars and with only a pair of sunglasses on my head. As I straighten up the bike, I glance in the mirror to see a string of curious egg-shaped machines, in a variety of colours, banking through the bend behind me.

Welcome to the 21st century, BMW C1 style. That view in the mirror was like a scene from a science-fiction film, but in much of Europe these unlikely vehicles are set to become commonplace. By the time you read this, the strangest and, in many respects, most advanced scooter ever produced will be on sale. In many cases its riders will wear little more than a shirt and shorts.

With its windscreen and roof the C1 looks so out of the ordinary that in Spanish coastal towns on the launch it left a trail of grinning spectators in its wake. But it’s the BMW’s unique safety features, which have persuaded many authorities to allow helmetless riding, that make the C1 special. Thanks to its aluminium roll-cage, impact-absorbing beak, twin seat belts and head restraint, this is surely by some way the world’s safest motorcycle.

And in case you were wondering, the C1 is controlled just like a normal scooter and is fun to ride. Despite weighing 185kg, more than some big sports bikes, and having a 125cc four-stroke Rotax single engine producing just 15bhp, the BMW has reasonably lively performance. By scooter standards it also corners and stops well, although you can’t afford to get too carried away in bends as I discovered when I became one of the first people in the world to crash one.

Even before you pull away, the C1 is like nothing else on wheels. Once you’ve climbed into the very low, wide single seat you’re confronted by two centrally placed levers, which combine to raise the extra-wide and secure stand. The engine starts at the press of a button, but won’t rev enough to let you ride away until you’ve fastened the twin seat belts (which are both released by a central red plastic lever) .

That felt distinctly strange, but in many other ways the C1 was much like any other scooter to ride. Its automatic transmission means you simply twist the throttle and go, the BMW accelerating fairly slowly at first but staying quite smooth as it heads towards its cruising pace. On a flat road it sat at a flat-out indicated 60mph, creeping up to 65mph on downhill stretches, but struggling and dropping back to 55mph against slope or wind.

On the motorway the engine rumbled like a cement mixer, but behind the big screen which is complete with wiper and washer spray I was well protected from the elements, with only a slight breeze swirling round my neck at higher speeds.

Occasionally there was a bit of a twitch as the bike was affected by a cross-wind, but stability at speed was generally fine. Inevitably the roofed bike felt a bit top-heavy round town, but I soon got used to that and didn’t find it a problem.

The dive-resistant Telelever front end and reasonably firm twin shocks made the C1 feel stable for such a relatively big machine, despite its tiny scooter wheels. Though it’s not as agile as a typical scooter it was easy to manoeuvre through the streets of Marbella.

Cornering was pretty good, too, at least by scooter standards. Michelin’s Bopper tyres gripped even on the shiny local roads, and the C1’s ground clearance is quite good, having been considerably increased over the prototype that I rode a couple of years ago. Trouble is, the first thing to touch down is the solid centre-stand, which due to its lifting arrangement is located at the front of the bike. Scraping the stand during a photo session levered the front tyre off the road and sent me into an unplanned demonstration of the C1’s crashing ability.

The bike was barely scratched, thanks partly to the solid bump-stops sticking out from its sides. I was also unhurt, thanks to the Dainese enduro jacket that took the impact as my arm scraped along the road. But I’d dispute BMW’s claim that: “the passive safety features a motorcycle rider has in the sleeves of his jacket and the legs of his trousers are featured here within the vehicle itself, meaning that you can drive the C1 in your usual street clothes.” Without my padded jacket that low-speed spill would have given me a pretty sore arm.

By chance I was wearing a helmet when I crashed, though I didn’t for most of my test. BMW say the C1 is safer without a lid, as the extra weight puts more strain on the neck in an impact. The German firm has persuaded authorities in most major European markets to allow helmet-free riding of this special new class of motorcycle, although countries including Britain and Sweden are still lagging behind.

In a high-speed crash I’d personally still rather be wearing a helmet (F1 racing drivers do, after all), but it’s undeniable that, in most markets, the convenience of helmet-free riding will be an important part of the C1’s appeal. Along with the scooter’s unique safety and weather-protecting features, this should be enough to ensure that it’s a success, and meets BMW’s aim of selling 10,000 units this year.

Three variants are available, all with the same engine and chassis, starting with the basic C1 which, at about £4000, costs as much as Suzuki’s unfaired Bandit 600 four. The Family’s Friend, with two-colour graphics, extra luggage space in the fairing and a fitting kit for the accessory top-box, is slightly more expensive.

The top-of-the-range Executive, finished in black and with a reading light, mobile phone holder, luggage net and a bracket for an aluminium brief-case, is ten per cent dearer than the standard model. Numerous other accessories are available, including heated grips and seat, roof vents, sound system and GPS.

A well-equipped C1, fitted with ABS (another extra) will cost over £5000. That’s a lot of money for a scooter. But the C1 is a unique machine which, for the first time ever, really does combine the feel, fun, traffic-beating ability and parking ease of a bike with a substantial amount of the safety and weather protection offered by a car.

The C1’s main safety feature is the safety cell formed by its aluminium frame and the roll-bars, also made from aluminium, which hold the roof. Such is this structure’s strength that the BMW can support more than the weight of a car on its roof.

The side elements are designed to prevent the rider’s head from hitting the ground when the bike falls over. The beak above the bike’s front wheel is filled with dense foam (as used in car bumpers) and is designed to absorb energy in a head-on impact. It is situated at the same height as the centre of gravity, to prevent the normal scenario whereby a bike’s rear end lifts in a frontal impact, making efficient energy absorption impossible.

The Telelever front suspension system, similar to that on other BMW bikes, also acts as a crash-deformation element.

Another important aspect is the seat, which is shaped to stop the rider “submarining” in a crash, and incorporates a headrest designed to prevent whiplash. Twin seat belts, one of which incorporates a lap-belt, are a vital part of the set-up, as the rider must be kept inside the bike during an accident.

Get BMW bike insurance for the bmw c1.