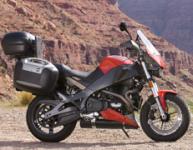 In the early 1990’s Ducati were in a spot of bother and decided they needed a bike that didn’t look like a race replica.

Their designer Galluzzi came up with the Monster retro, which was originally expected to sell maybe 1,000 units a year. It was an immediate sensation and rapidly went on to become Ducati´s best selling bike by a long way.

The Monster came in a 900cc package to start with, joined by a 600, 750 and 400cc sized siblings over the last decade or so. Wheelie fans prefer the big 900 model simply because it has plenty of power, but all Monsters are brilliant bikes to blat around town on, or to test the trellis framed chassis on some quiet country lanes.

Mainly however, people buy Ducati Monsters for one simple reason; they look cool, end of story.

One short stretch of bends was all it took to show that my doubts had been misplaced. After examining the bike and reading the spec-sheet, I´d been encouraged: the Monster may have no fairing, but its styling is gorgeous, its paint is bright red and it certainly looks like a true Ducati.

Yet still the uncertainty had remained. Even after piloting the M900 through the outskirts of Varese, Cagiva´s home-town amid the hills and the lakes of northern Italy, I wasn´t convinced. The Duke handled the congested streets with ease, feeling light, responsive and well-balanced as it flicked through the fog-shrouded streets.

But everyone had expected the Monster to be pretty useful in town, after all. The real test would come on the open road, when a few bends would determine which of the two words on its petrol tank summed-up the Ducati Monster.

And suddenly, a few miles out of Varese, there they were. A series of sweeping, well-surfaced curves that brought the phrase Ducati country to mind as I hauled on the big Brembos up front, tipped the 900 into the first left-hander and then wound back the throttle to send the Duke barrelling out of the bend with the smooth, long-legged feel that could only come from a well-sorted V-twin.

A few moments later the bends were history, and so were my doubts about the Monster. This bike may be a stripped-down streetfighter better suited to slicing through traffic than to dicing on the open road. But make no mistake, it´s still every millimetre a product of the firm famous for thundering desmodromic sportsters and three consecutive World Superbike titles.

I guess nobody should have expected anything less from a manufacturer with Ducati´s tradition, particularly one riding on the crest of a wave generated by demand for its bikes that would have seemed totally unbelievable in the dark days of a decade ago, when the Bologna firm was struggling and close to extinction. Current sales of the sportsters are so strong that Ducati can afford to risk something a bit different, and that´s what the unfaired M900 is. Take one glance and you can see why they´ve called it the Monster. Simply built and brutally styled around the trademark V-twin lump, it bristles with raw power and aggression.

The name fits and helps define the image, but behind the machismo the 900´s accent is on simple, street-riding fun, with musclebike styling and sportsbike technology blending to give an alternative to Japanese retro-bikes. Despite its name, Ducati are hoping that the Monster´s looks, low seat and light weight will attract a wider and “softer” audience, including women riders’, to the marque famous for hard-edged sportsters.

“With the Monster we are trying to start a new philosophy for Ducati, but we want to keep the best things from out sports bikes too,” explains design chief Massimo Bordi. “This is very different to a naked Japanese bike. It has no fairing but it is made with the best components we could use.”

Links with traditional Ducatis are obvious and direct. The new bike combines elements of two top-selling models, holding the 904cc V-twin engine from the 900SS in the steel ladder frame of the eight-valve 888 flagship.

But instead of hiding the 90-degree powerplant behind a fairing, it sits on show below a humped fuel tank that leads into a diminutive rear end. And the barrel-chested bodybuilder shape is backed-up by classy dashes of carbon-fibre on sidepanels and exhaust heat-shields.

There are no internal changes to the two-valves-per-cylinder, sohc desmo motor. Maximum rear-wheel output of 73bhp at 7250rpm stays the same, too, although the Mikuni carbs have been rejetted to suit the Monster´s new silencers. The frame is identical to that of the 888, complete with rising-rate rear end – unlike that of the relatively simple 900SS. Suspension is a combination of upside-down Showa forks from Japan and a shock from German firm Boge.

Feel of the Monster is very different to that of the sportsters, though. The wide, slightly raised bars, low seat (with detachable pillion-seat cover) and fairly high footpegs give an upright riding position that´s better suited to town riding than to high-speed blasts.

Instrumentation is basic, consisting of just a white-faced speedometer plus a block of warning lights to its right. The Monster feels short and stocky as it fires up with a mixture of exhaust note and mechanical rustling from the SS´s charismatic, if slightly crude, oil- and aircooled V-twin.

Who needs a tacho? First impression of the Monster is that the 900SS´s superbly torquey engine feels even better when there´s no fairing to reduce the sense of speed. My ride was limited to a hurried couple of hours at the launch on the roads near Cagiva´s base. But even before leaving the traffic behind I was captivated by the big, basic V-twin motor.

Ducati´s fairly low-tech lump is almost perfect for a bike like this – tractable, smooth and full of character. Carburetion from the 38mm Mikunis is spot-on, and the Monster´s instant response from almost any revs gave a relaxed feel along with deceptively quick performance as I headed into the winding hills north of Varese.

In top gear, rolling-on the throttle from 50mph or even lower sends the Monster shooting forward instantly. The acceleration builds gradually, with no hint of a power band. The Duke just keeps on accelerating until, with your chin buried beneath the tank´s rich red paintwork, the bike´s heading towards a top speed of around 130mph.

Not that you´d want to keep that up for long, on this or any other unfaired machine. Despite a few high-rev vibes the motor feels as though it would cruise at a ton for ever. But the exposed riding position means you´d need a monstrous neck and biceps to hang on at that speed for long sitting-up, and high-velocity travel is not what M900 is made for.

It´s much happier at lower speeds, where the motor´s stunning flexibility really comes into its own. In first gear, a handful of throttle lifts the front wheel so easily and controllably that this must be one of the all-time great bikes for wheelies. (Only Triumph´s 900 Trident runs it close, among recent big roadsters.) Front-tyre life is potentially limitless, but a Monster pilot´s licence won´t last long without a great deal of self-control.

One engine drawback is that a bike like this doesn´t need all six gears, especially as the box is not particularly slick (neutral is frustratingly hard to find). The transmission was also let down by the notorious Ducati dry clutch, which began slipping after a succession of not particularly violent take-offs during the photo session.

On a bike that´s likely to spend much time in town, the weak clutch is a fault that needs attention. The other problem with my launch-bike, a slight oil weep, was traced to an insufficiently tightened hose fitting and shouldn´t be repeated.

Part of the reason for the Ducati´s stonking straight-line performance is its weight of just 406lb, and that figure also has much to do with the bike´s beautifully balanced feel. Combining light weight with a stiff frame of chrome-moly tubes (using the engine as a stressed member) gives a great starting point for fine handling.

Suspension at both ends is fairly soft but well up to the job. Forks are the non-adjustable 41mm Showas fitted to the 750SS, with springs and damping modified to suit. The Boge rear unit is adjustable for preload and rebound damping, and on the standard setting combined a comfortable ride with plenty of stability on the bumpy backroads.

Steering is deliciously light and quick, aided by the 17-inch front wheel and sporty geometry. (Rake and trail are 24 degrees and 104mm, very similar to Ducati´s sportsters´ figures.) A gentle nudge on those wide bars is enough to snap the Monster onto a new line, and in slower bends it´s as fun to throw around as the brilliantly agile 900SS. In addition, the handlebars´ generous lock adds to slow-speed manoeuvrability, making the M900 both quicker and comfier than its faired siblings in traffic.

Tyres are Michelin´s A59/M59 radials, in hefty 120/70 and 170/60 sizes. Some testers would have preferred sticky Hi-Sports, but these boots provide more than enough grip to get the corners of the Monster´s fairly low-set silencers scraping.

There were no complaints about the 900´s front brake set-up of big 320mm floating discs with four-pot Brembo calipers. This is genuine super-sports tackle, and it´s good to see that unlike many manufacturers, Ducati haven´t scrimped in equipping their naked bike. Backed-up by a 245mm disc at the rear, the stoppers give heaps of power and feel.

Good gear is expensive, though, and perhaps the Monster´s worst aspect is its price – at £7750 on the road it´s far more expensive than Japanese retro-bikes and other naked rivals such as Harley´s 883 Sportster and Triumph´s Trident. (Ducati´s own faired 900SS costs only £100 more, and for all-round use would be a better buy.)

Those seduced by the M900´s image won´t be disappointed, however. The Monster may not live up to its name. But beneath the machismo and the streetwise style is a fast, fine-handling bike with the soul of a true Ducati.

Get Ducati motorcycle insurance for the ducati m900 monster.