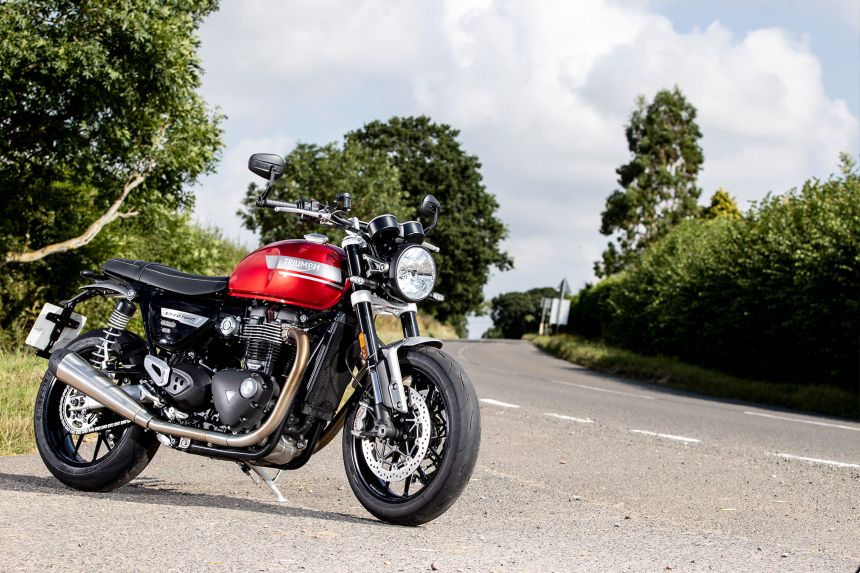 Triumph’s Speed Twin has always been an impressive machine. But now for 2021, it promises to be even better.

The Speed Twin has probably always been my favourite bike in Triumph's modern classic range, as it's just the right mixture of hardcore, style and substance, even if the last model was just that little rough around the edges. But for this year Triumph tell us that they’ve addressed that, giving the 2021 Speed more power, a better handling package, more tech, and a new look.

Although the 1200cc ‘twin engine at the heart of the Speed’ has always been a gem, Triumph have gifted it a whole load of internal work to not only meet Euro5 regs, but to make it a better all-round motor too. It might not look it from the outside but they’ve been serious as well, working on a load of bits from high compression pistons to a lightweight crank and a load of stuff in between, which results in figures of 98bhp, delivered with 112Nm of torque.

It’s not just about the figures on a spec sheet though. The new Speed not only has three more horsepower than before, but it revs 500rpm higher, makes its peak torque lower down and actually creates 17% less inertia than before, which should all add up to an even more engaging, exciting and easier ride.

And on the subject of the ride, they haven’t skimped on the handling side of things by any stretch either. With super-sticky Metzeler Racetec RR rubber, the Speed Twin needs quality components to deliver an intuitive ride, which is why the new model has been gifted some new Marzocchi forks alongside lighter, cast aluminium, rims and a set of more powerful Brembo M50 Monobloc calipers.

Couple that with some slightly updated rider modes, a USB socket and some refined looks, and the new Speed Twin sounds like it’s going to be an absolute corker of a machine. But is it worth the £11,000 price tag?

For me, retro machines can be really hit or miss in terms of their appearance, but ever since I first glanced at the new Speed Twin, I think it’s up there with my favourites. Triumph’s retro range don’t share their underpinnings with their more modern offerings, meaning that they’re designed to look traditional without any compromises. 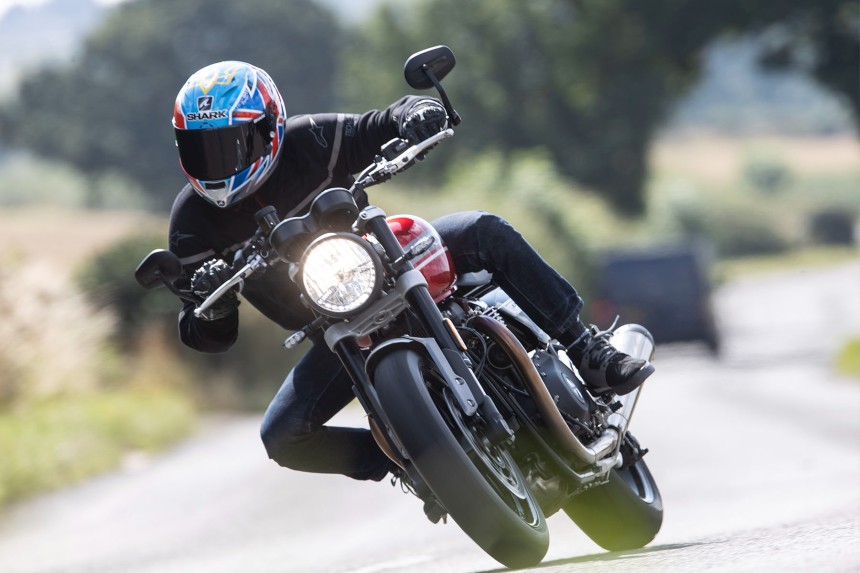 While the racy Thruxton and even more retro Bonneville T120 same the same platform, the Speed Twin is a roadster that just seems to hit that perfect mixture for me; it has the curved tank, the old school filler cap and the general look of a traditional motorcycle that turns heads wherever you park up, yet thanks to those aggressive rims and tyres, the high-spec looking suspension and that gorgeous finish, it looks like it’s built for the ride too.

Sitting on top is a really nice place to be, with the switchgear all nicely positioned and the retro, twin dial, dash easy to read. If you were hoping for a big TFT unit and all the latest rider aids, gadgets and gizmos, then this is definitely not the bike for you!

Although it’s fairly hefty, tipping the scales at 216kg, it doesn’t feel anywhere near that at all, especially as that ‘twin engine pumps into life in such a calm manner; there’s no massive vibration or pumping, but just a gentle roar from those twin exhausts. The Speed Twin comes equipped with three rider modes to choose from, but to be honest Sport gives the most responsive and best feeling, without being snatchy or aggressive at all.

I have to say, an engine of this capacity has absolutely no business being so delicate at the bottom end; it honestly feels like a gentle giant until it gets to about 4000rpm, where the torque just fires it forward. It never seems to run out of steam either, as that little extra power and revs at the top end make such a difference, as I never accidently bumped into the redline, pre-empting the gearchanges with ease… the old school way, with no ‘shifter in sight.

Although the engine is a mightily impressive unit, the thing that got me most about the Speed Twin was just how well it handled, once I got my head around it. Thanks to the stance, geometry and those things that the bods in Hinckley have to navigate to create something that both looks and has the essence of a classic machine, the Speed (like most bikes in the sector) feels like the front end sits fairly high, which did take a bit of getting used to with the fairly wide handlebars (watch those bar-end mirrors when filtering through traffic).

But after just a few miles, it instantly gelled; whatever magic is in those Marzocchi forks, I just found myself riding the Speed Twin harder and harder, with absolutely no qualms whatsoever. Those new Brembos stop it with incredible urgency and no matter what I did, there was no issues with grip, ground clearance or wallowing whatsoever; this thing is without a doubt the best modern classic I’ve sampled for juggling the seriously less sporty retro looks, while still being able to take a proper B-road spanking. 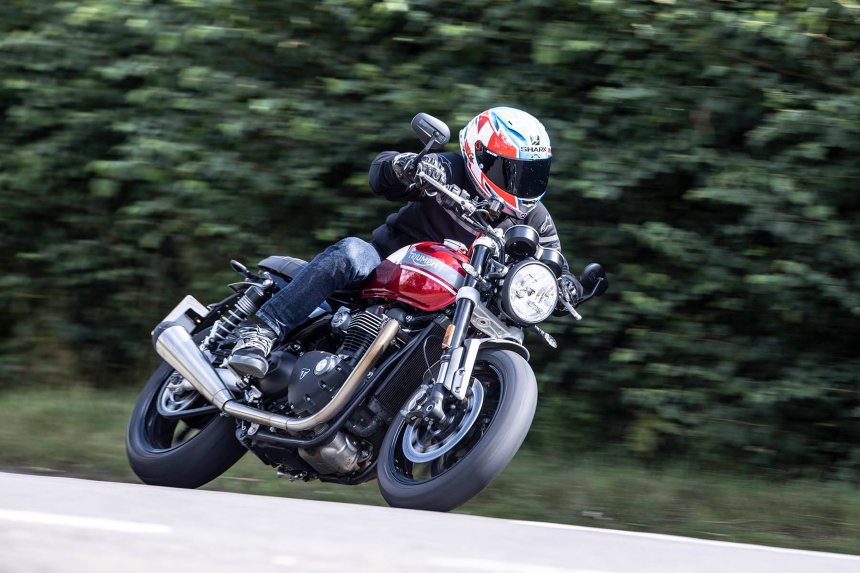 It is comfortable too, with a roomy and relaxed riding position. I have to say, I wouldn’t be a big fan of going a massive distance due to the lack of wind protection and the fact that it does buzz a bit at motorway speeds, but to be honest I wouldn’t expect this kind of bike to excel in those situations.

It’s also worth remembering as well that it’s still basic in a lot of ways but it does get away with it, in a sector where tech is arguably at the bottom of the priorities list. Take the riding aids as an example, there’s so much grip on a nice day that you’d do well to even get the traction control going, but even so both that and the ABS are very basic, although thankfully not too intrusive. But then again, when it looks like that who am I to complain?

For those looking at a traditionally styled modern machine, there’s not a massive amount of choices out there. At this £10k+ price point, competition comes from the likes of the Ducati Scrambler 1100 Sport PRO, Kawasaki’s Z900RS and the BMW R nineT series. 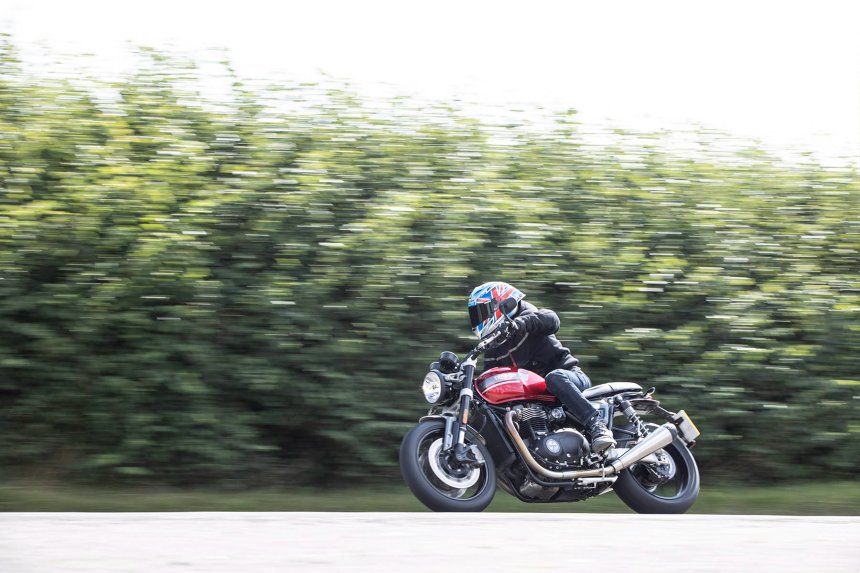 But Triumph do seem to have the retro bike market sewn up and as far as modern classic machines go, this is up there with my all-time favourites. The Speed Twin was never a bad bike, but Triumph have just chipped away and improved so many aspects of it, to make a really great machine. Sure, it’s quite expensive and sits fairly basic in terms of technology, but it oozes character from that glorious motor, while offering a seriously impressive set of skills when it comes to handling the corners.

Whether you want a calm roll around town or a hectic ride in the countryside, the Speed Twin will not only happily oblige, but will get you there with considerable style.