The old S1000RR was an immediate winner on the road (and roads).

This all-new one is already a winner on track, too. Insidebikes takes to the track to see what’s different…

Superbikes have always been about evolution rather than revolution, and big leaps forward in technology and ability don’t come around very often. From the top of our heads, 1985’s Suzuki GSX-R750, 1992’s Honda CBR900RR FireBlade and 1998’s Yamaha YZF-R1 are three of the biggest that spring to mind. But with its S1000RR, BMW has now done just that twice in the space of a decade.

The first, launched 2009, had a class-crushing 190bhp combined with decent electronics and a roomy, real-world chassis that made it brilliant both on the road and, from 2014, also in pure roads racing where it became the weapon of choice for TT riders.

But despite BMW’s best efforts, those slightly larger proportions counted against the RR at the very highest level on track where it never managed to turn race wins into championships, in either world or British superbikes.

But that looks all set to change with this all-new S1000RR. And, better still, it’s also lost none of its famed roominess and road relevance.

Every single facet of the new RR has been redesigned, from its engine to its styling and dash – and all of it is an improvement.

The 999cc four is not only slimmer and lighter than before, due to clever touches like hollowed-out valves, it now boasts a mind-warping 207bhp out of the box.

But nor is it all about peaky power. The adoption of BMW’s crafty ‘ShiftCam’ system, as debuted on the R1250GS boxer, helps boost low and mid-range power and torque while updated electronics including customizable rider modes, traction control, launch control, anti-wheelie and more, keep it all utterly and inconspicuously under control.

The chassis is just as impressive. Partly now a tubular steel trellis and with a degree of flex designed-in (BMW call it ‘flexframe’) as racers criticized the old RR’s twin spar for being too stiff, it’s also shorter, smaller and sharper all-round, delivering immediate, intuitive handling that reminds you more of a supersport 600 than a full-blown litre bike.

But if you’re wondering if, ergonomics-wise, that also adds up to the RR being a compact, extreme little scratcher, think again. We’re not quite sure how BMW have done it but, despite those more compact dimensions, the new RR is every bit as roomy and road relevant as before with pegs that are surprisingly low and bars that are refreshingly high. Our six-foot-plus 50-something-year-old tester had no problems at all.’ 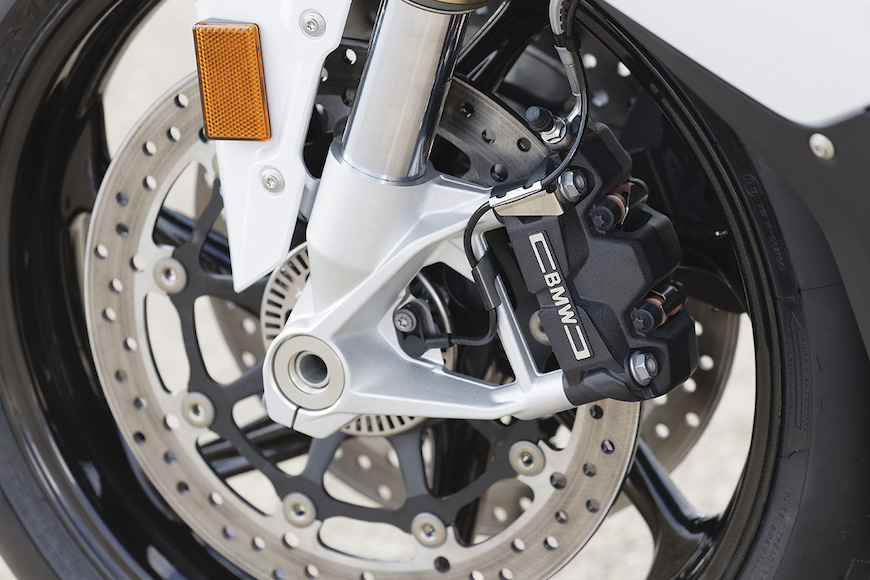 And best of all, better even than its astonishing power and tractability, better than it’s sharp, intuitive handling and real world ergonomics, is how refined, effective and relevant the whole of this new RR combines to be.

The updated semi-active suspension (now by Marzocchi) just works – sublimely; the new American Hayes brakes immediately dismiss any concerns you might have had about the switch from Brembo and are possibly even better still; while all the controls, electronics settings and mass of machine information are all now accessed by what’s quickly become in 2019 BMW’s standard issue and beautifully clear and effective 6.5” colour TFT dash. Traditional dials and LCDs seem simply obsolete after this.

And it’s all of that, combining seamlessly and delivering astonishingly, is what truly impresses most with the new RR. It’s not just more powerful or sharper – it’s better in every way. It’s already even a winner on track, too.

See, nothing’s perfect after all…