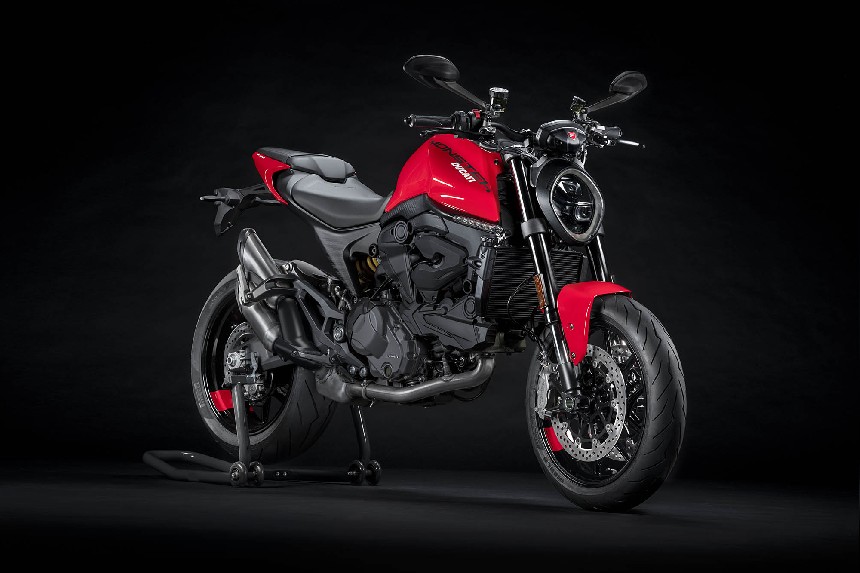 Ducati’s Monster range really has been a serious hit since they released the very first iteration all the way back in 1993. Since then there have been countless updates, different models and even some special editions; last year for example, there were four different Monsters on sale. But for 2021, Ducati have not only simplified the Monster range, but they’ve also heavily updated, and stripped back the bike itself, too.

And we aren’t talking about just minor updates, as the brains in Bologna have been hard at work creating something special under those new, sharper aesthetics. For starters, the engine is now the bigger, 937cc unit shared with the SuperSport, Multistrada 950 and Hypermotard with a load of new parts including new conrods and pistons, a new clutch, a new cylinder head… the list goes on.

This means that the 2021 Monster pumps out two more horsepower than before, to make 111bhp, and 93Nm of torque that’s on tap 1000rpm lower than before. Sure, you might think isn’t much, but they’ve then paired it with a whopping 18kg weight saving. Yes, you read that right: 18kg.

The weight savings come from all over as well, as they lost 4.5kg shed on the front frame (which is now a unit that mirrors the Panigale V4’s), 1.7kg on the rims, 1.9kg on the subframe and so on, but the main brunt of that comes from ditching their signature steel trellis frame for the first time.

There are many die-hard Ducati fans who’ve turned their nose up to the change, but when it adds up to a wet weight of just 188kg, it must be worth a try.

It’s not all about faster and lighter either, as Ducati have also made the ’21 Monster both smarter and more accessible too, gifting it a full suite of electronics that includes changeable rider modes, traction control, wheelie control, cornering ABS and even launch control – all fed through a shiny 4.3” TFT dash. It’s not just about the performance though, as there a couple of nice little details, like the self-cancelling indicators, which are a welcome addition to the new Monster.

Ducati told us that they’ve made a bike that’s fun for experts and easy for the novice rider, and they’ve gone the extra mile in making sure that the Monster is even more accessible than it was before. They’ve moved both the ‘bars and ‘pegs ever so slightly for a comfier position, and even increased the steering angle by a whopping seven degrees to give a much improved turning circle at low speeds, and although the seat height sits slightly higher than before it’s still very low at 820mm.

Combined with a very narrow profile from that thin chassis and engine combination, it’s very easy for riders of different shapes and sizes to get on with. We all have to admit, that sounds pretty good, right? Especially as the Monster will set you back £10,443, which puts it near enough on par with the impressive 890 Duke R, MT-09SP and even Aprilia’s Tuono 660. But how does it perform? 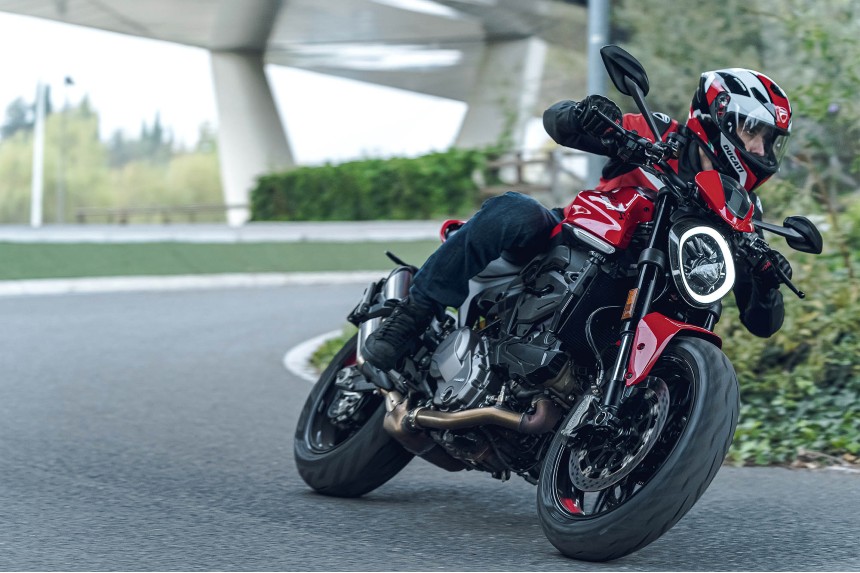 Personally I’ve never been the biggest fan of the Monster range, as it seemed to lack the aggression that I’d go for in a naked, with its fairly hefty weight, soft set-up and rounded appearance. But for the ’21 model, it’s sharper, aggressive lines instantly made an impact; the new Monster is nothing short of stunning in the flesh, and the way they’ve still kept a nod to past models with the rounded headlight is a really nice touch too.

Although Ducati have put a lot of emphasis on the making the numbers on their spec sheet seem impressive, they really haven’t forgotten about making the Monster user-friendly either. Although the seat height is slightly higher than before, the chassis feels incredibly narrow, which means I could easily get my feet down, and with the slight change that they’ve made to the steering angle, I can safely say that is the easiest Ducati I’ve ridden and manoeuvred at slow speeds.

In fact, I’d go as far as saying very probably the easiest high(er) capacity naked to control, so if you’re reading this and want something easy, Italian and confidence inspiring, there isn’t a bike that I could recommend higher than the new Monster.

Much of the same goes for the seating and riding position, as it all feels perfectly positioned and incredibly comfortable, although if you’re standing close to the six foot mark, I can’t imagine you’d feel too comfortable as it’s fairly cosy, to say the least.

As I’d expect from a modern Ducati though, everything is exactly where it should be in terms of the button positions and the new TFT dash is a nice addition, packed with information while still being a doddle to navigate. Mind you, I still have no idea why they bothered sticking launch control on the Monster, when they didn’t even put it on the Panigale V2.

But that’s a question for another day, and the Monster’s riding position and cockpit looked and felt every bit how a Ducati should, with my only gripe being the non-adjustable suspension. Whatever way it’s played, I just think it looks naff with the silver fork cover, and I do enjoy having a bit of adjustability to tweak and perfect a setup.

But then again, I needn’t have worried as the Monster is an absolute animal in terms of its agility. Sure, the ’21 model has a little more power and the torque is accessible lower down, but the real change in the new Monster comes in the sheer amount of weight that’s been dropped; it literally feels as easy to throw about as a 300cc machine, but with a power figure that’s still in triple figures. 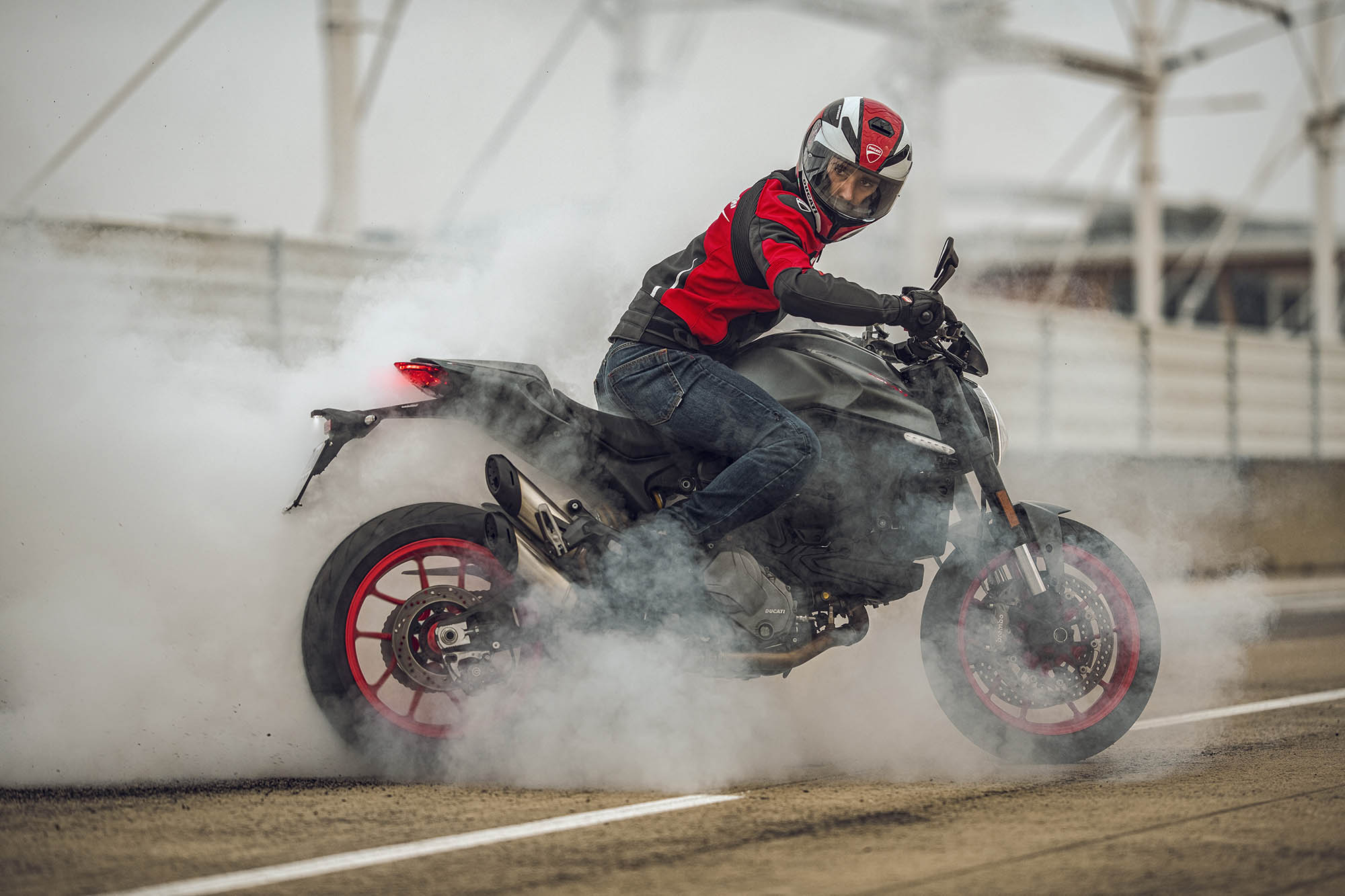 Although the suspension isn’t adjustable, for my weight the Monster felt near enough spot on, as it flicked effortlessly from side to side yet without any excessive dive from the front end. I’m not sure how much of a difference even having the Panigale V4 derived front section makes, but when I was hitting those high-spec Brembo calipers with everything that I had the Monster obliged and gave an incredible amount of feedback in the process.

The same goes for the rear, which offered an ample amount of feedback while still doing a grand job of soaking up bumpy British roads.

The same sentiment goes for the tried and tested 937cc Testastretta motor, as it really does work a treat. Ducati have nailed the smoothness at bottom end and thanks to that improved torque curve it seems to pull no matter where you find yourself in the rev range, easily picking up toward the redline with the incredibly charming growl that we’ve come to love from Ducati twins. When it does, the ‘shifter and ‘blipper are on hand to look after the gearshifts and everything just works in perfect harmony, making the Monster an absolute joy to thrash miles on.

In all honesty, the only gripe with the engine comes in the fact that it’s almost too smooth compared to other, high capacity nakeds, as if you really want a bike purely for hooning about on, then there’s a couple of more suitable options on the market from both Austria and Japan. But saying that, I really don’t feel like either are as easy to ride as the new Monster, which still offers a bucketload of fun and an exciting ride.

Ducati’s Monster is an entry level machine into the Italian marque, but it still feels truly special, and as far as Monsters go, this is the best one that I’ve ridden by a long shot.

It’s nimble yet still exciting, classy but not too crazy and is a really well-rounded package, with a load of tech and some classy components to make it a real weapon, whether sharpening a new rider’s skills, or giving an expert something fun to ride on a Sunday afternoon. As far as comparisons with the competition goes, it’s difficult to pigeon-hole as the Monster has built such a following of die-hard fans that it never really needed to sit wholeheartedly in any sort of category.

Yet now, with the hike in performance and the improvement to its handling it’s more than capable of pulling on the coat tails of the likes of the KTM 890 Duke R, Yamaha MT-09SP and Kawasaki Z900. And sure, it may lack a little in performance compared to those (especially in terms of having insanely exciting engine characteristics) but what it does, it more than makes up for in usability and Italian zest… and all for a reasonable price. Kudos, Ducati.