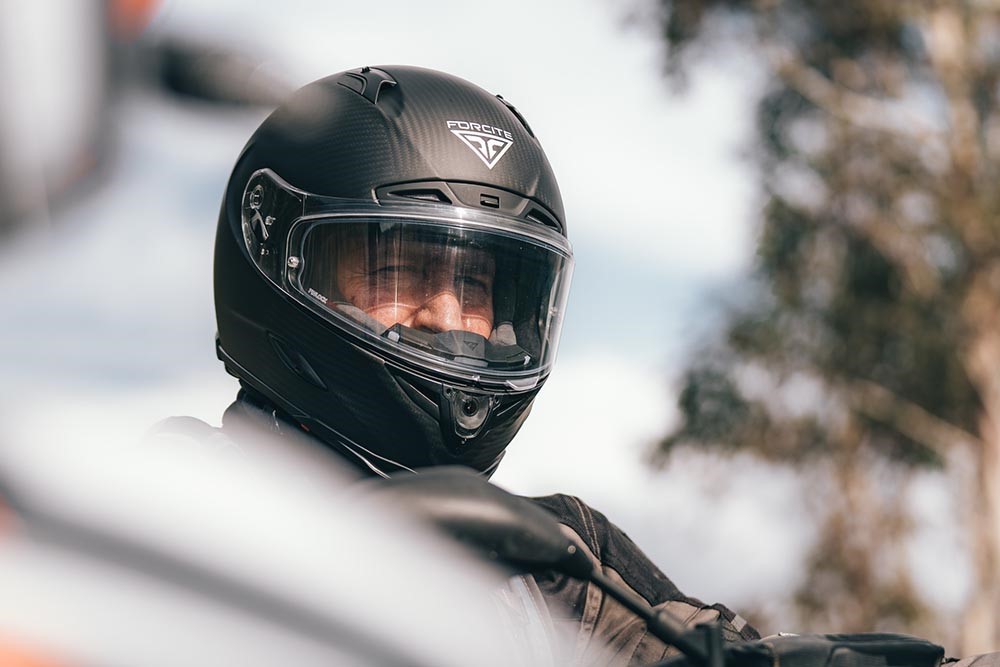 Wearable technology is all the rage these days. Devices like Apple watches and Fitbits are hugely popular, and now an Australian company is looking to enhance the life of motorcyclists with a tech laden helmet called the Forcite MK1S.

Now we don’t normally review crash helmets for a number of reasons. In many ways, traditional helmets are all much of a muchness. They’re designed to do one job, protect your head in the case of an accident, and although higher end helmets have some additional features like extra vents and more sophisticated visor mechanisms, choices often come down to comfort, design, price and brand image. And because comfort is subjective and differs from rider to rider, helmets are very much a personal choice which can be hard to really review.

But the Forcite is such a unique proposition we just knew we’d have to try it out.

In many ways, it’s not truly groundbreaking, but what it does is bring together many of the common accessories used by motorcyclists in one package. That means you get an inbuilt action camera, integrated speakers and a clever navigation system which uses LED lights placed in the rider’s peripheral vision. It’s like a four-in-one helmet, as it were, and after spending a good few months wearing one, here’s my thoughts…

It is a helmet, after all…

Without doubt, the most important role the Forcite plays is as an important piece of personal protective equipment.

In some ways, this is Forcite’s biggest challenge. Riders trust names like Arai and AGV, so the thought of spending big money on an unknown brand represents a risk to many – and as Forcite currently only sell direct to the public through their website there’s no facility to try it on before you buy. In my experience, riders tend to be loyal to a helmet brand. I’m a Shoei guy, I just like the fit and the way it feels, and a quick poll around our office saw four colleagues all have their own preferred brand, which we all tend to gravitate towards when it comes to buying a new helmet.

That said, Forcite have engaged experienced companies to design and build the shell of the MK1S, while their engineers provide the tech. Word on the street is that the design of the shell was done by the people behind many of AGV’s helmets, and that it is made in a factory alongside other established brands – with final assembly carried out in house by Forcite in Australia.

The shell itself is made from high end carbon fibre, although the sizing felt a little bit out from other helmets I’ve worn in the past. Usually I would say I’m a medium, but the large Forcite I’ve been wearing feels just right. Having attending a press event last summer, I was fortunate to be able to try on beforehand – but if you purchase through Forcite’s website they will offer a 30 day ‘size swap’ service if you find you need a different size.

Part of the reason for using carbon fibre is to keep weight down, and Forcite claim a weight of 1500g, which is less than 100g more than the Shoei X-Spirit I usually wear – despite the addition of all the electronics on the helmet. Like my Shoei, it’s also got an integrated sun visor – which I found to work well enough through a slider operated by the rider’s left hand.

The electronics are mounted in the chin bar area and although I couldn’t feel any extra weight over a ‘normal’ helmet, I did notice that my chin could easily hit the chinbar when I jutted my jaw. It isn’t really an issue for me, but we all have different shaped faces and I would imagine those with more chiselled features might have a different opinion to mine. Personally I found it pretty comfortable to wear, with reasonably firm padding and not too much wind noise. It reminded me of an HJC I had a few years back, while colleagues who tried the MK1S unsurprising said it reminded them of AGV designs.

What about the tech?

What makes the Forcite different are the electronics, which are integrated in the chinbar. Putting them here has allowed the shell to pass ECE 22.05 certification, which is the European safety standard. The helmet needs to be charged, using a regular USB cable, and gives three hours of recording or around eight hours of listening to music or navigation. It is switched on with a button discretely hidden in the chin bar, and it is operated through an app on your smart phone and a handlebar mounted controller which allows for the most common functions to be conducted in seconds.

Personally I am not normally one for tech when riding. I don’t listen to music on the go, take calls or record my ride, although I do sometimes mount my phone on the handlebars to use as a sat nav, so when the Forcite was presented to me I was all a bit ‘meh’. 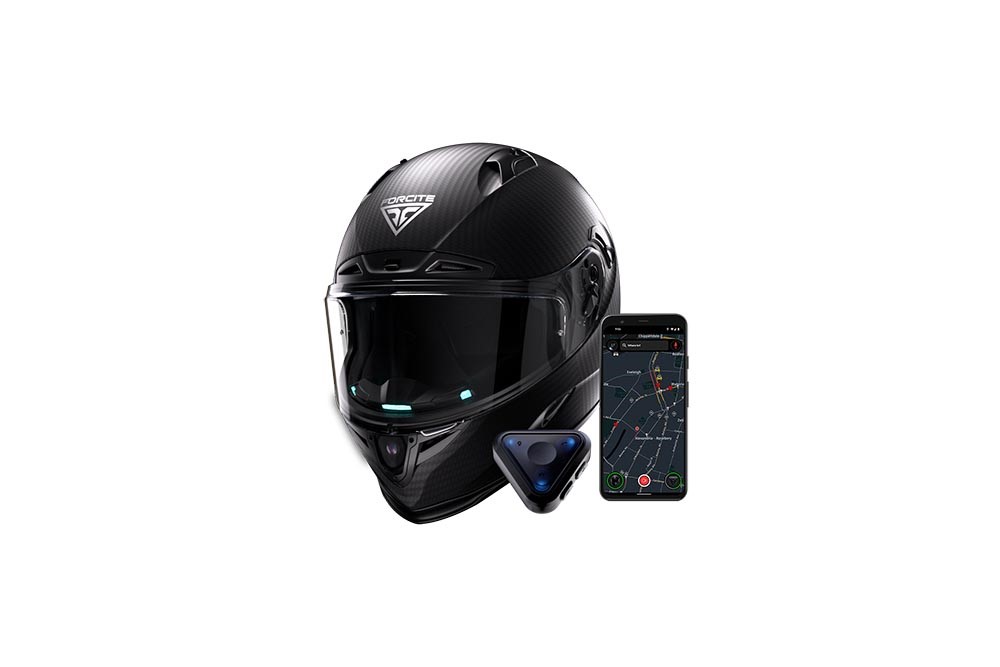 Since using it, I’ve started to record my commute. I think it’s a useful function, like a dashcam in cars, and if nothing of note happens you can just forget about it and the system will eventually record over old footage without the need to wipe the SD card. Dashcams are useful in case you are involved in an accident and need to attribute blame in case of an insurance claim. Because the cam is chin mounted, you can also see which way you were looking. It's also a good tool for reflecting on your riding. Often I might question some decisions I make on the road, and having a recording of your ride can be a good way to retrospectively evaluate your riding, for example to look at your lines or overtaking techniques.

If you want to share footage, for example on YouTube, the quality is decent (1080p) although not anything like the resolution or stabilisation of high end device like a GoPro. I also tried commentating as I rode, vlogger style, and it picked my voice up reasonably clearly, albeit not to the level of a GoPro fitted with an external microphone. You can see some footage on our video review, and make your own mind up.

As a track tool I can also see great value in the Forcite system. Body and helmet worn cameras are generally forbidden on track days, but the Forcite system allows you to record in a way where you can see where your head is pointing – a great way to evaluate your riding. The camera can be activated through the Forcite phone app, or by pressing a button on the accompanying controller (which is designed to be mounted on the handlebar). The controller also has the ability to wipe the SD card in an instant, should you wish to…

The Forcite system has inbuilt 40mm Harman/Kardon speakers, which can be adjusted to fit the positioning on your ears, and I really liked the sound coming through them. Generally I don’t listen to music on the go, but I tried them out a few times and found nothing to complain about. Connected to Google Maps on my phone, and using it as a sat nav, I found the system clear both around town and at speed, where I used filtered ear plugs by Auritech. Volume is controlled by the handlebar mounted controller, although I would have liked some kind of option to control the features using voice commands – something the Forcite doesn’t offer. At first I wasn’t too keen on the idea of the controller. It’s not particularly elegant but works way better than all the helmet mounted controllers I’ve used on other comms systems – which have you randomly stabbing your finger at buttons which are impossible to see.

While other helmets can be retrofitted with cameras and speakers, the truly innovative feature of the Forcite is the built in navigation system. This uses an array of LED lights placed just under the visor, giving the rider visual aids as to the next turning – with green lights signalling left and right turns, and red to indicate hazards such as road works and speed cameras.

To be honest, it was the feature I liked least on the Forcite – preferring to use Google Maps connected to the speakers, but it’s a clever feature and will win some fans. The app itself isn’t the slickest to use, but its ok and the great thing about digital technology is that updates can be made quickly and easily. Forcite’s development programme has focussed around a team of early adopters in Australia, a community which has fed back and collaborated on the development of the product, so we’d expect to see the tech evolve as more and more riders get involved.

One thing we haven’t mentioned up to now is the price. At £929, it’s not exactly cheap – but when you break it down you do get a lot for your money. A carbon fibre helmet, action cam and quality speaker system together can easily add up to four figures. Whether or not it represents value for money is something only the individual can decide and, ultimately, when it comes to helmets, it is quite a personal choice. Comfort is key and although I found the Forcite MK1S pretty comfortable, there’s no guarantee others will feel the same – as is the same with all motorcycle crash helmets.

The thought of spending over £900 without the chance to at least try the helmet on beforehand will possibly be off putting for some, but Forcite have been smart in using proven companies to design and manufacture the helmet shell and to offer a 30 day returns policy, so you can send it back to them (in Australia) if you try it on and it doesn’t fit.

The integration of the technology is clever and if the features tick your boxes then it’s definitely worth considering. Having met them, the team behind the project are real bikers and bona fide tech innovators, who are combining their passion for bikes with their record of product innovation.

They deserve to succeed.