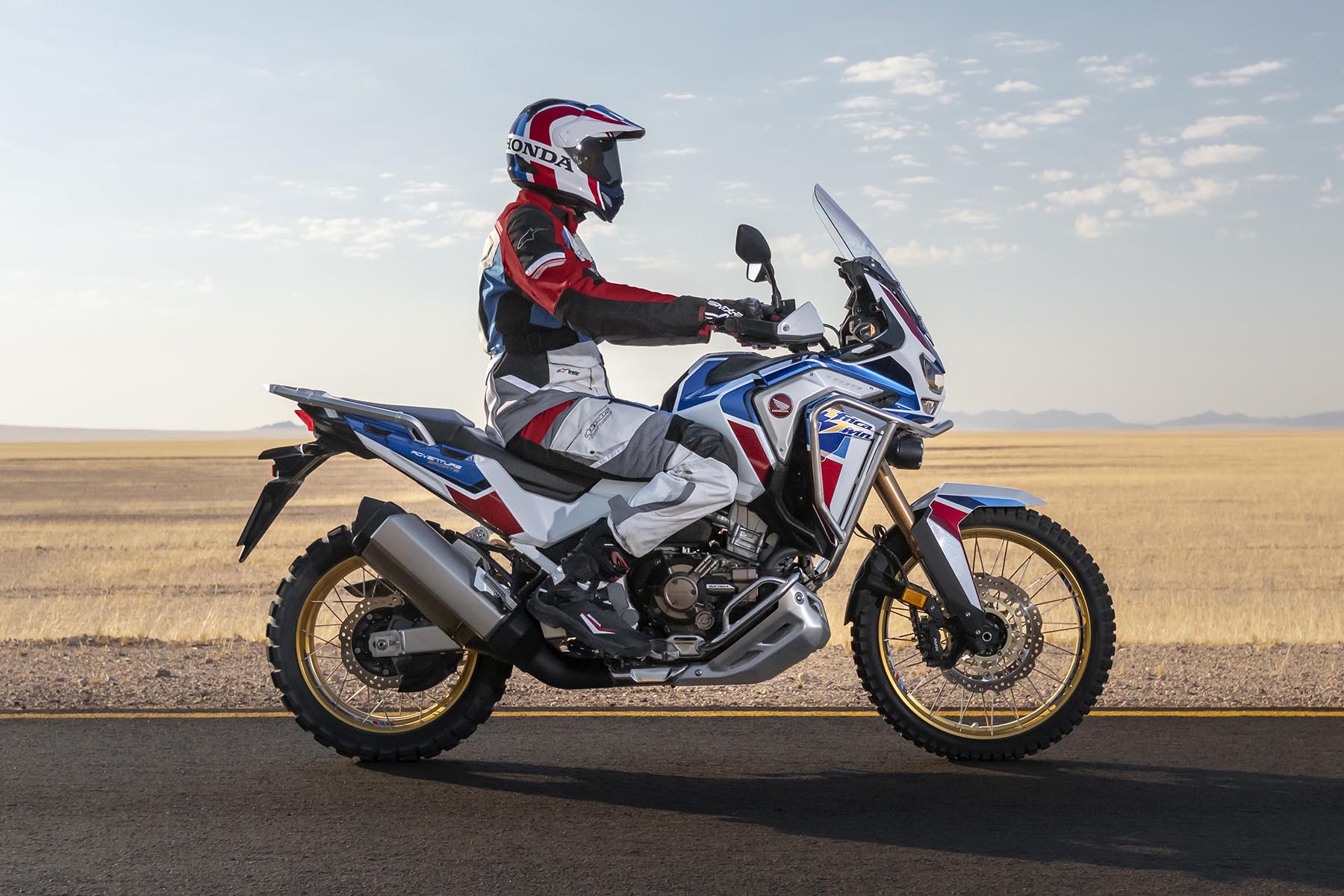 In a sector that has absolutely boomed over the past 10 and more years, Honda’s Africa Twin range has been a mightily popular choice, being an impressive all-rounder since the latest generation was released in 2016 – although it has had some updates since, including a load more tech and a bigger engine.

Now equipped with a 1084cc parallel-twin engine, the Honda doesn’t have the top end power of the biggest bikes in the class. Unlike many of its rivals, which sit above the 130bhp mark, the Africa Twin pumps out 100bhp and 78ft/lb torque, which although doesn’t sound like a lot is still a sizable amount, especially when taking the AT off-road. As we were testing the Adventure Sports model, it comes equipped with all the gadgets and gizmos you’d expect from a top-level adventure bike, with everything from a big TFT dash and rider modes and rider aids, such as cruise control and electronically damped suspension. Unlike some of its rivals however, it does not come with a quickshifter. But then again, it’s not always a necessity on big adventure bikes. So how does the Africa Twin hold up, both on and off-road?

At first glance, it’s fair to say that the Adventure Sports is an impressive steed. Unlike a lot of the bloated looking adventure bikes on the market, the elegant Africa Twin has a tall yet narrow stance that’s reminiscent of the machinery that you’d see line up to take on the Dakar Rally. But don’t worry, it’s not some insanely hardcore weapon as Honda have made their adventure bike range as user-friendly as possible, which is evident from the very first ride. It’s nice to have a conventional key and ignition barrel for a change, rather than a keyless system, and everything on the Africa Twin feels like it was made for comfort, from the big, roomy seat, to the high bars alongside the low pegs. Although the Africa Twin is quite narrow in terms of its chassis and engine, the standard seat height feels fairly high – but don’t let that put you off, as a low seat height option is available too.

Although everything on the ‘bars is exactly where it needs to be, I have to say that I wasn’t the biggest fan of the dash set-up. The TFT unit looks pretty smart but I found that it wasn’t the easiest system to navigate and alter settings, while there’s a pretty useless, old-school looking extra bit underneath, which reminds me of those old Casio watches. A bit unnecessary, in my eyes. 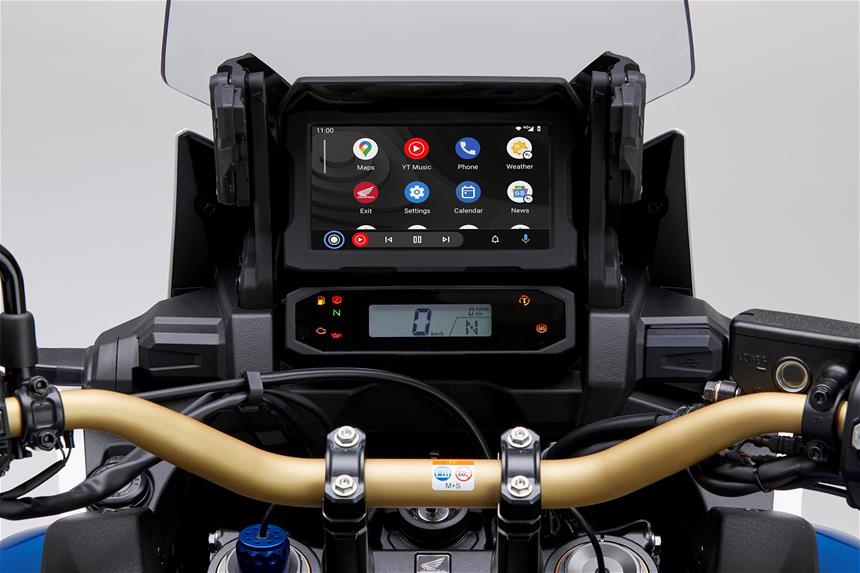 Saying that though, it’s when you get going, that the Honda really does make sense, and comes into its own. With the AT in Urban mode, that silky ‘twin engine really does feel effortlessly easy to use, with a gorgeous delivery of power the whole way through the rev range. With full power it does have a nice amount of go but it doesn’t quite have that same edge as its rivals where power is concerned, making it more of a gentle ride to higher speeds, but not offering any crazy excitement when cracking the throttle. It just happily goes about its business, with a slick gearbox making ‘shifts a pleasure too. A quickshifter would’ve been a nice addition if I’m being honest, as would the very popular DCT system, especially if you were looking for something slightly different, and in many ways easier to ride. Honda sells a large percentage of Africa Twins with the dual clutch DCT system and although we tested the manual version, we know first hand just how good the ‘automatic’ system is.

The same goes for the handling aspects of the ‘Twin, as it feels more like a small capacity CRF (Honda’s hardcore enduro and MX range) than it does road going CB roadster. Even with the suspension set at its very firmest, there’s a lot of weight transitioning both on acceleration and on braking, even though both the power delivery and the braking power aren’t exactly ground-breaking, but more just a fairly smooth and soft affair. Sure, a bit more power on both braking and acceleration would be nice, but the Africa Twin was never created to break lap records, it was designed and built to be a comfortable, capable adventure bike, and it does that very well indeed.

Especially when taken off-road; thanks to its tall, thin stance and CRF DNA, the Africa Twin performed incredibly well when it came to green lanes. With the electronic suspension and rider modes dialled in, not only is it even softer and more pliant than ever before. We rode the Africa Twin alongside some of its competitors, including the new Harley-Davidson Pan America and BMW’s ubiquitous R1250GS, but I’d go as far saying that it’s probably one of the easiest big capacity adventure bikes in the business to get dirty on – and that’s no mean feat. Sure, it doesn’t have the brutal aggression or the serious capabilities of the really off-road driven machinery in this sector (cough, KTM), but it does make navigation of the great outdoors very easy indeed.

When it was (re)launched in 2016 the Africa Twin slotted neatly between middleweights like the BMW F850GS and the Triumph Tiger 900 series, and the established big boys led by the ubiquitous R1200GS. It has grown up quickly in recent years though and, with a price now knocking on for £15k, the latest Adventure Sports version is firmly at the premium end of the adventure bike market.

Although I have to admit that I wasn’t completely sold at first, after racking up some mileage I could see why the Africa Twin range still sells by the bucketload; it’s just bloody good at going about its business with very little stress. Sure, it’s not the most riveting or exciting ride in the adventure segment, nor is it the best looking in my humble opinion, but it does offer an impressively well-rounded package, for a fair price too. We can’t wait to get our hands on the 2022 model, which promises some more subtle developments…