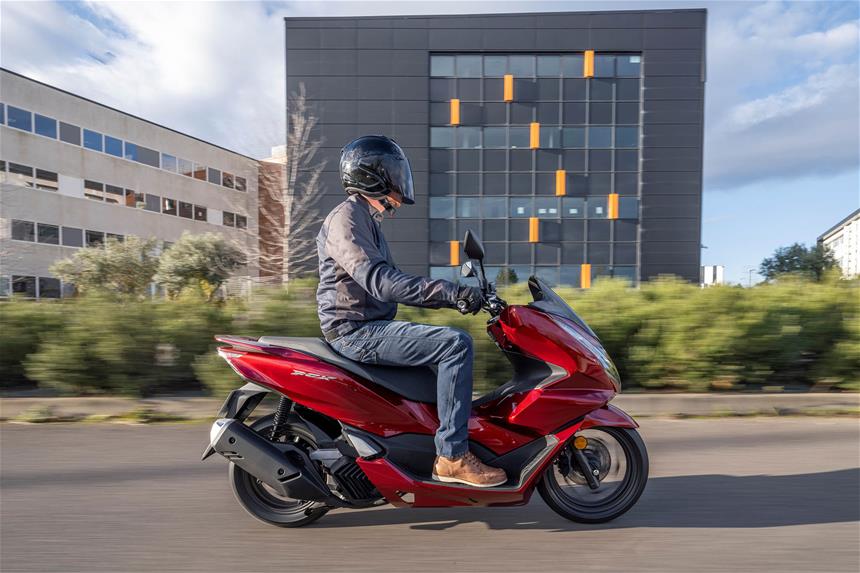 Britain’s biggest selling powered two wheeler for the best part of a decade has been given a ground up makeover for 2021, but what is the latest Honda PCX125 like to ride? We took one for a spin to find out…

Honda’s PCX125 has been a phenomenon since its launch back in 2010. Honda created a new type of scooter, occupying the middle ground between the basic step thrus and high end luxury models of the time. It has consistently topped sales charts both here and throughout Europe (selling over 140,000 units across the continent) and is a firm favourite with commuters and couriers alike. For 2021 a new model has arrived, promising better performance, more specification and even less emissions.

At first glance the 2021 PCX doesn’t look so different to the one that’s flown out of showrooms for the past decade, but the reality is that almost everything about it is completely new. It’s kind of typical of Honda to launch it in an understated manner – the PCX is that kind of machine – and to be honest they probably don’t have to announce it with a fanfare anyway. The PCX already flies out of dealer showrooms and that doesn’t look like changing any time soon.

The first thing you notice about the PCX is just how low and light it is. Wheeling it out of the garage is truly effortless. Young or old, man or woman, this is motoring for the masses, a practical A1 licence scooter which can be ridden with a CBT.

With keyless ignition, it is simply a case of being in proximity, twisting the control switch to ‘on’, pulling the brake lever and thumbing the starter button. It whirrs almost silently to life and sets off with a simple twist of the throttle. A Honda PCX is simple to ride. Period.

My friends think I am slightly weird, because while they bang on about the latest Ducatis and other exotica, I’m always extolling the virtues of this ubiquitous little scooter. What I love about the Honda PCX125 is that it’s just about perfect at doing what it is designed to do and there’s a reason why it sells so well – it’s just so darned good at doing what is supposed to. 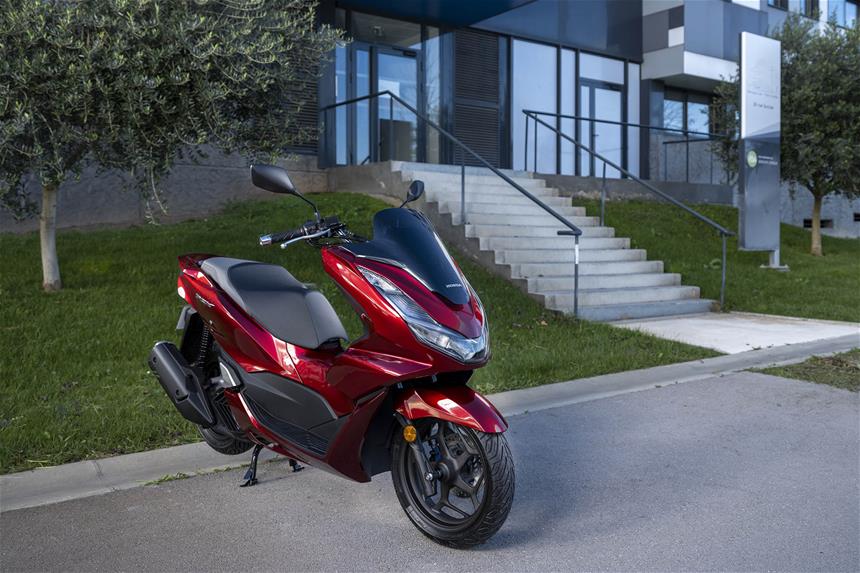 I was a big fan of the previous model and, you know what, the 2021 version is better in every way imaginable. Of course, we’re not talking of revolutionary design changes, but a gentle evolution of a proven winning design in almost all areas.

The new engine is the main talking point. This year’s Euro5 regulations has meant that manufacturers have had to take a look at their powertrains and reduce their emissions. The old two-valve motor was decent enough but it lacked the peppiness of its main competitor, the Yamaha NMAX.

Honda have now replaced the old motor with a new four-valve unit, which takes it closer to the Yamaha and leads to an improved top speed, with no significant loss of fuel economy. There’s a lot of nerdy stuff going on inside the engine to reduce friction and emissions, which we don’t need to go into here, but the result is a unit which is incredibly smooth and quiet, as well as cleaner than the one it replaces.

It also employs a car style ‘stop/start’ system which cuts the engine while stationary and seamlessly fires up and pulls away with a twist of the throttle.

The all-new chassis is a big improvement too. Where the previous generation model could feel a bit thrashy and skittish through its skinny IRC tyres, the new scooter’s bigger and wider wheels, not to mention the upgraded Michelin rubber, make it more assured and more comfortable. The addition of ABS brakes and traction control are also a big safety benefit. I spent more time than I would have liked to riding the PCX in filthy wet conditions and it was ever so confidence inspiring, even on slippery roads.

But what makes the Honda stand out for me is the way in which it is just so practical. Boring things, maybe, but the generous underseat storage space, the fact that the accessory top box works with the central locking, and the general quality feeling of the product all stand out for me.

The underseat storage really is a big deal. The whole MO of scooters is that they are practical and the ability to carry a bag of groceries, motorcycle security locks, a gym bag or a change of work clothes, is an important selling point to me.

Honda recognise this and have increased the underseat storage space by 2.4 litres over the old model, to 30.4 litres in total. What that means, in the real world, is that you can store your full faced helmet in the trunk while you are parked up, and still have space for some waterproofs or the likes.

Sure, most scooter manufacturers say that you can get a helmet under the seat, but often that can mean just a smaller jet style helmet. I am not saying that every single helmet design will fit under the seat of a 2021 PCX, but I can say that I (successfully) tried five different makes and models as part of our test and had no issues at all.

To put that into context, I tried the same five helmets in a similarly priced model from another manufacturer and only one fitted. The PCX really does have a cavernous boot on it.

There are plenty of cheaper scooters out there but what you get with premium brands, especially Honda, is that lovely attention to detail. If you want more storage, there’s that optional top box for 35 additional litres of storage.

Where most aftermarket luggage requires the rider to carry around an additional key, this one works off the bike’s keyless central locking system. Heated grips are also available as an option and, because they’ve been designed in conjunction with the scooter, they wire right into the PCX’s electrical system.

There’s also a small glove compartment on the left hand side of the scooter, which features a USB-C socket, which can be used for charging a phone. 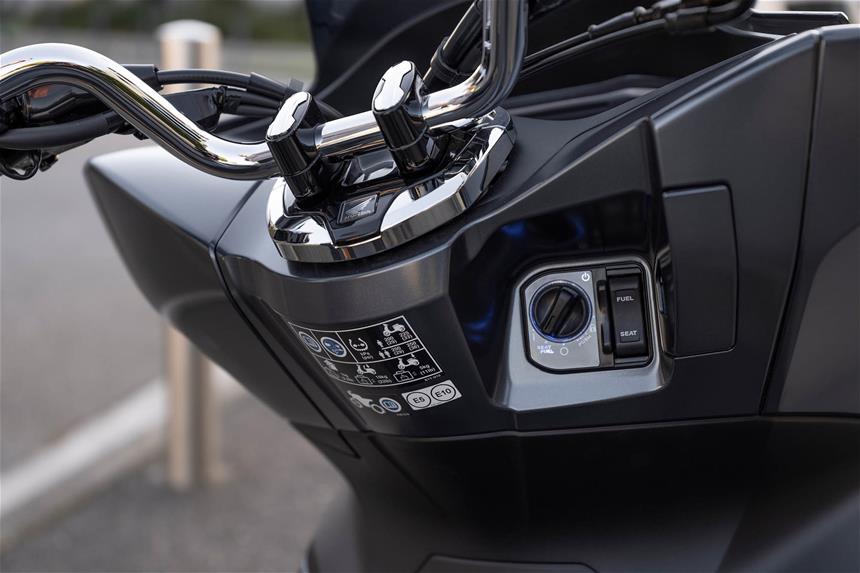 That’s especially handy for those who like to use their smartphone as a sat-nav. There’s no mobile phone connectivity with the PCX, in the way that some more expensive scooters allow phone functions to be controlled through the bike’s dashboard. The PCX125 features chromed handlebars which are really practical though.

They’re a bit of a design element carried over from the old model and great for those of us who like to use something like a Quad Lock to mount their phone while riding, especially as the USB charging point is very conveniently placed too. Many other scooters have a plastic ‘finisher’ on their handlebars, which look smarter but which make the fitment of devices a bit trickier, and there is an aesthetic downside to Honda’s design, as the PCX has a spaghetti of cables, hoses and wiring left out on display.

For the ride to work though, it’s perfect. The 12.3bhp engine purrs up to, and easily holds, 60mph. That’s ideal for single carriageway roads and enough to keep ahead of trucks and buses on dual carriageways. It’s definitely a bit quicker than the old model and although top speed is not the be all and end all of these kind of machines, it’s definitely a consideration for those who need to spend time on the open roads.

I’ve ridden scooters which have struggled to hit 55mph and I can confirm those extra few mph make a big difference when riding on A roads and trying to stick with the flow of traffic. For the record, we saw 70mph on the PCX clocks while going down a slight incline, although hit a hill or headwind and you’ll be unable to maintain it.

Acceleration is sharp away from the lights, making it as quick as any other vehicle through congested city streets. It’s cheap to run too. Official fuel consumption, using the standardised World Motorcycle Test Cycle, is around 133mpg and even running the PCX at full throttle on long stretches of dual carriageway during our test we were able to average over 100 miles to the gallon. With an 8.1 litre tank, you should be able to do the best part of 200 miles between refuelling stops, probably even a bit more.

On top of it all, I think the PCX125 looks great. The colours are sober but classy, with four options (red, white, black or grey) available. There are LED headlights, a stylish and very easy to read dashboard and it’s comfy too. There’s plenty of leg room for riders of all sizes, and I found the heavily sculpted, and smart looking, saddle to be comfortable.

At £3169, the Honda is competitively priced and even a few hundred pounds less than its great rival, the Yamaha NMAX. Honda are also advertising PCP deals, from £49 per month over three years. 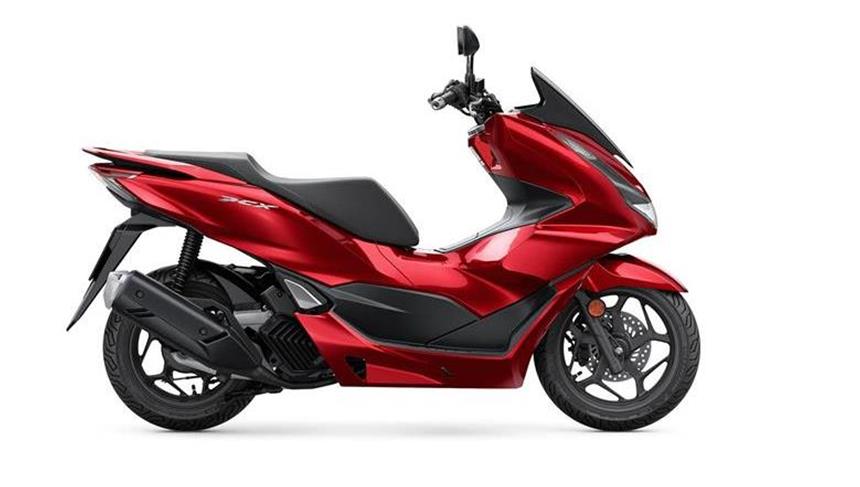 Overall, my admiration for the PCX has only increased. Once again it hits the brief bang on the head. Being picky, I’d have liked some more weather protection and the ability to connect to my smartphone, but that’s about it. That said, there is an accessory windscreen (which we didn’t try out) and for another £1700 Honda will sell you their range topping Forza 125, which is physically bigger and has an electronically adjustable screen.

Scooters like these are the perfect way to commute and, for sheer value for money, it’s hard to see past the PCX.

Long may its reign continue!