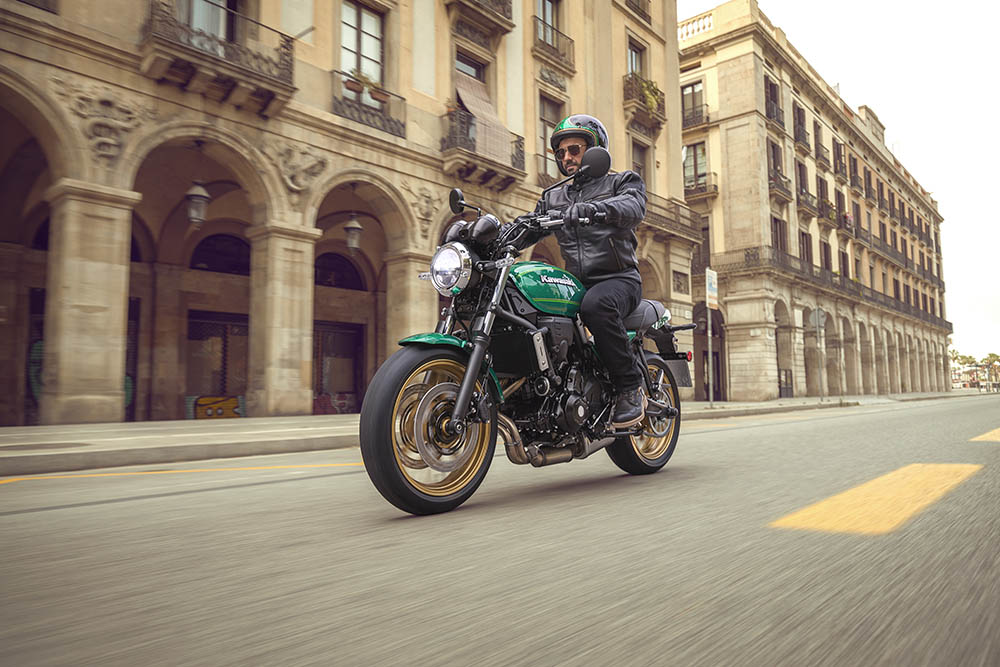 There aren’t many sectors in the motorcycling world more populated than the middleweight naked market. It really is filled with something for everyone too, from fairly budget modern classics to full-on supernaked-styled machinery. But then again, if you don’t want to go to those extremes, then smack-bang in the middle is a nice little semi-retro segment that includes machinery such as Yamaha’s XSR700, Triumph’s Trident, Honda’s CB650R and now? Kawasaki’s Z650RS.

Based heavily on the Z650 (Kawasaki’s sportier middleweight naked), the Z650RS keeps the same parallel-twin engine, pumping out 67bhp and 64Nm torque, steel trellis frame and suspension combo. It follows the popular Z900RS by taking a modern design and making some little tweaks to not only give it the ‘70s style, but also a more relaxed, retro feel too.

This is thanks to a host of changes that include the wider, flatter higher handlebars, classic headlights, revised tank and bodywork, old-school instruments, flat spoke wheels and round discs instead of wavy ones. These changes are then complimented by a few gorgeous ‘70s style colour schemes to complete the look. 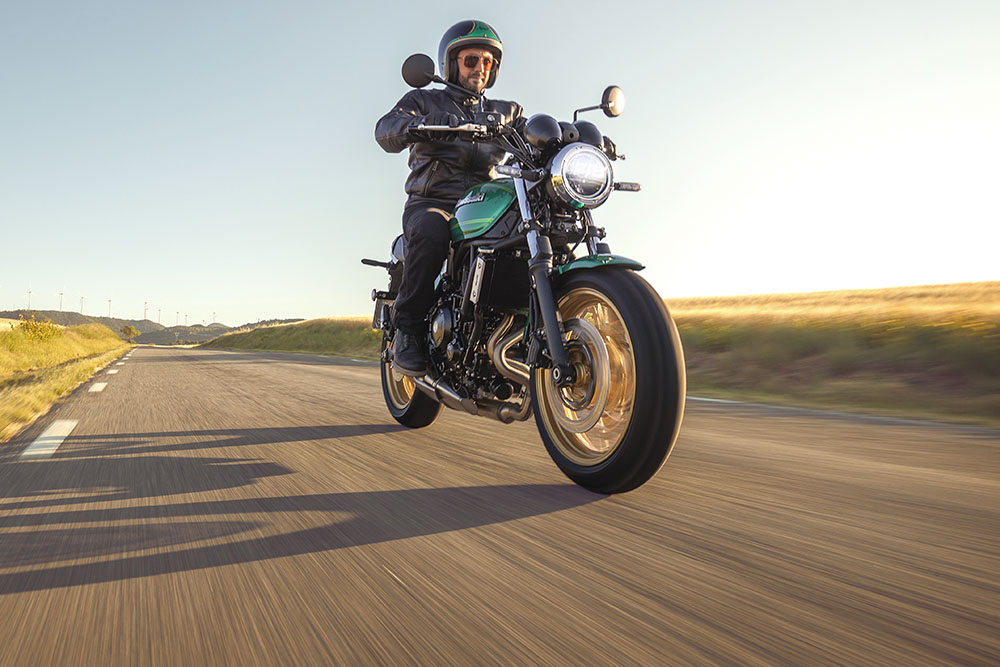 There aren’t many other big or notable changes to the RS, although now the seat height is a fairly hefty 30mm higher than before, and while the Z650 comes in at £7049 for the poshest paint job, the Z650RS is a touch higher at £7699 in that gorgeous Candy Emerald Green colour scheme that we tested. For reference, that’s near enough exactly the same as an XSR700, while the less retro Triumph Trident 660 and Honda CB650R are both cheaper, by about £300.

But then again, looking at the Z650RS in the flesh it really is an impressive looking machine that looks worth every penny, and more. From the golden rims and that single headlight to the impressively premium finish on the paint, the middleweight Kawasaki really does look like a mighty beast, and an 820mm seat height, it really feels like it too.

In fact, it feels quite roomy with everything just where it should be, thanks to a really relaxed and comfortable riding position, alongside a well-placed switchgear set and a neat display set. I don’t usually like a mixture of analogue and digital, but Kawasaki have really nailed it, thanks to the minimal yet impressive amount of info on hand, including a fuel range and a gear indicator.

Those are two little things that I really feel every bike should come with, as standard. In keeping with the retro feel, electronic aids are at a very minimum too, with no rider modes, traction control or other wizardry – just good old fashioned ABS, and the connection between your right hand and the throttle.


With these nice touches and its bigger stance, the Z650RS feels more substantial than just a retro middleweight naked, until you hit the starter button, that is. It’s not like its underwhelming, but the way in which that ‘twin engine bumps into life isn’t exactly the most inspiring sound in the world, which is a real shame as it performs absolutely beautifully in the guise of a modern classic.

It really is a peach in terms of refinement, offering a really pleasant ride throughout the rev range and a really nice throttle connection to boot, but it’s just not the most exciting unit on the planet in terms of low down grunt, and character. Saying that though, it actually works really nicely to compliment the laid back, relaxed vibe that the Z650RS oozes, happy enough bumbling around at city speeds or even cruising along on the motorway.

Still though, if I’d just forked out the cash for one of these, the first thing I’d do is stick an aftermarket ‘pipe on for a throatier growl at the bottom end. 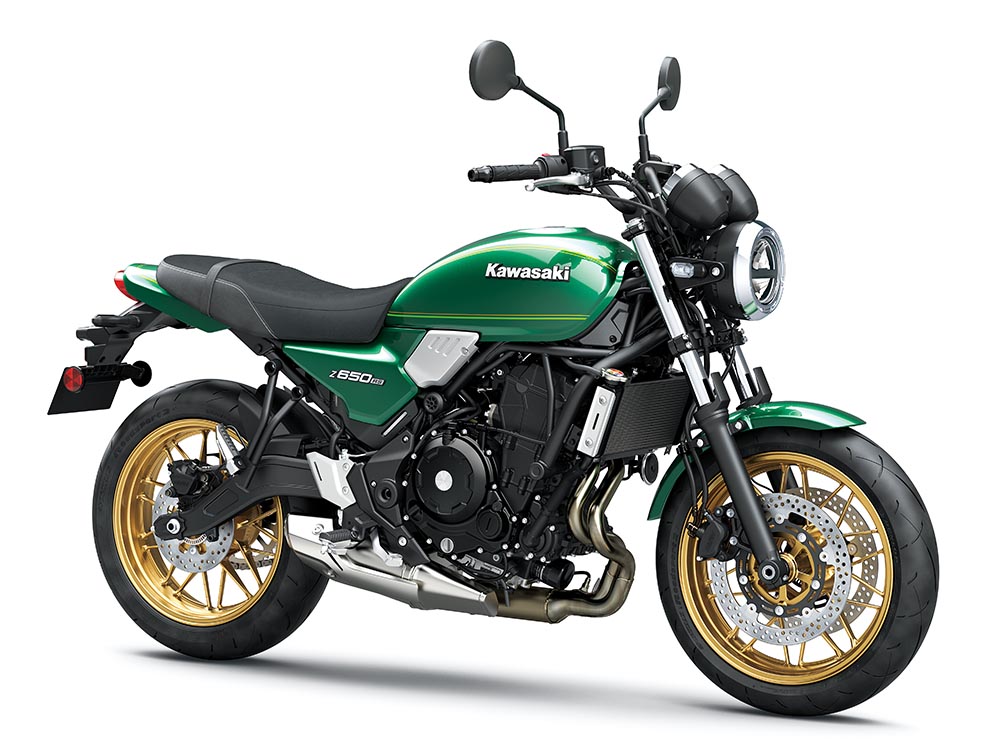 And when I talk about the Z650RS oozing a relaxed vibe, I really mean it. When those high ‘bars and relatively low ‘pegs combine with the long, comfy seat unit, it really does create a roomy machine that could easily accommodate a taller rider, while still offering an impressive amount of feedback through the chassis and suspension to certain extent… even if those front forks are the wrong way up (or the right way, depending on how old school you are).

The RS actually offers an impressive ride as a whole, considering how budget those relative components are, with even the brakes offering up a soft, yet ample amount of stopping power. It’s a nice touch having adjustable span levers on both sides too; it’s these little details that really do make a difference with a machine, and is why I enjoyed my time on Kawasaki’s Z650RS so much.

Being a sportsbike and supernaked addict, I never thought I’d prefer the Z650RS to the Z650 donor bike it’s based on, yet in a less-hardcore package, the components and engine just seem much more at home. A lot of people moan about bikes sharing platforms, but when it works well and keeps the cost down like it has with the RS, I can’t really see a downside.

Kawasaki really have crafted a beautiful little machine in the Z650RS, in terms of both its look, finish and most importantly, its riding capabilities. For under £8,000 the RS is a seriously impressive package that’s not just a parts bin special with a dash of paint chucked on; it’s a well thought out and properly executed middleweight, that offers a ride and finish of bigger capacity bikes for a lot more cash.

Sure, it’s not perfect, nor is it the most exciting machine on this planet, but it doesn’t need to be. If you’re a fan of these machines and want to be enjoying those smooth and gentle rides over some hardcore Sunday afternoon blasts, I really don’t think you can go wrong with the new Z650RS.