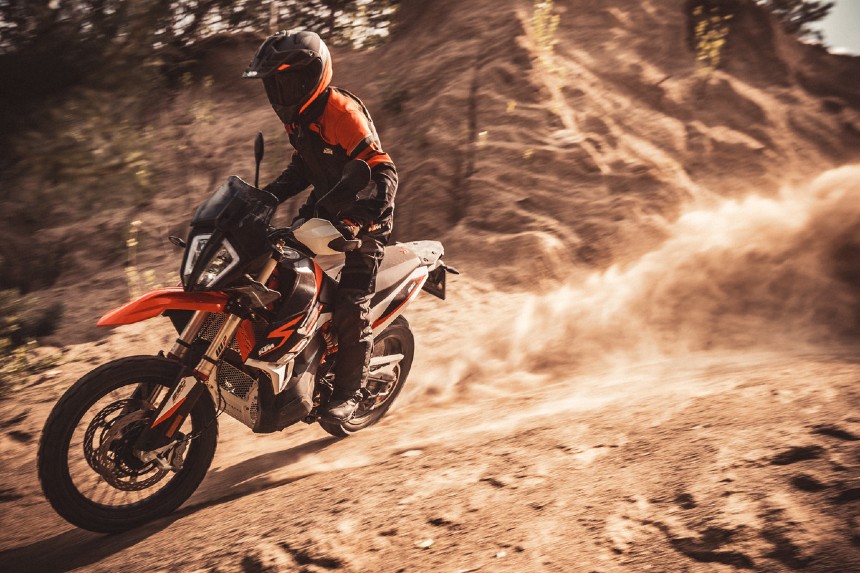 It seems like only yesterday that KTM unveiled their 790 Adventure R to the world, a properly capable off-roading weapon for the serious adventure rider; yet here we are just a few years later with a beefier, updated version. Sure, it might look near enough identical, but there’s more to the 890 Adventure R than meets the eye.

For starters, as the name suggests, it now comes equipped with an 889cc twin motor which is 90cc bigger than before, ultimately giving an a 10bhp power hike, to make 105bhp at 8000rpm, while torque has also seen a hefty rise with an extra 12Nm to make 100Nm at 6500rpm. It’s not just been a case of sticking in a bigger lump though.

The engine has been given a heavier crankshaft for an increase in rotating mass, which in turn improves the feeling of the torque and power delivery, while the gearbox and clutch have been updated and revised slightly to make gearshifts that little bit smoother too.

Although the chassis remains largely unchanged, the ’21 890 Adventure R does come equipped with a lighter subframe and a new aluminium steering stem, while the fully adjustable WP XPLOR suspension comes equipped with optimised settings. Electronically, the ABS and TCS settings have also been improved too.

For all of this, the new 890 Adventure R will set you back £11,999, although the exact model we swung a leg over came equipped with the ‘Tech Pack’ for an extra £769.30. This meant that it comes equipped with cruise control (even though the button is a standard fitment), a quickshifter and autoblipper, MSR engine braking control and a ‘Rally’ engine mode, for when you really want to be serious on the dirty stuff.

And if you do want to get serious on the dirty stuff, the 890 Adventure R looks as menacing as it does impressive. It appears near enough identical to the outgoing 790 Adventure R and really is a case of ‘don’t fix what isn’t broken’, as it’s sharp lines, orange paintwork and knobbily Metzeler Karoo 3 tyres on those beefy off-road wheels ooze the adventure tekkers that you’d expect from a machine lining up for the Dakar – not for something that’s just about to tackle some serious mileage of motorway and B-roads before it even sees some gravel or dirt, in the dodgy UK climate.

But of course, if you’re going to be buying of these the chances are it will see a fair bit of tarmac riding, so our first jaunt was a bit of dual carriageway mileage, followed up by some B-road action.

The first thing that got me about the KTM is the actual size of it; jumping on (literally, as it’s very tall with an 880mm seat height) the 890 Adventure R feels like a beast of a machine with its high, wide bars and chunky tank. As far as a riding position goes, the Adventure R is incredibly comfortable and roomy, and actually promotes a standing position too, although it’s worth noting that if you’re on the shorter side (I’m 5’7”) don’t expect to be able to get anything more than a tiptoe on the floor.

I was a big fan of the 790 motor previously, but the 890 really is a step up, thanks not just to the extra capacity making power and torque, but due to the fact that it just feels that little more refined than before.

I can’t say exactly how much of a difference the extra rotating mass makes but it still revs up incredibly quickly all the way to the top of the rev range, where the refined gearbox and clutch does a cracking job of slotting up and down ‘box with ease – especially with the quickshifter and autoblipper we had on this test bike. It does buzz a little at motorway speeds but it definitely earns some brownie points back with the (optional) cruise control and the decent level of wind protection.

With that extra power and torque though, the 890 Adventure R’s performance is actually way beyond what those Karoo 3 tyres are realistically capable of, especially when the road surface and conditions anything short of perfect.

The KTM really will spin up with a sharp twist of the throttle, yet even so those electronics do an incredible job of keeping things in line – I don’t think I’ve ever relied on traction control as much as I did on this Karoo-equipped 890, and no matter how hard I was willing to push, it stepped in with very little heavy interference to keep things ship, shape and shiny. The same goes for the ABS too, as the brakes really do offer a lot of power that can be a bit overwhelming for the rubber.

To be honest, on the roads the tyres really were the biggest issue, as thanks to those little suspension tweaks, the 890 Adventure R could be a fairly capable tool in terms of cornering. Sure the 21” front tyre does make changes of direction sluggish and gives a vague feeling compared to a conventional naked, adventure or sports bike, but it didn’t feel out of its depth too much at all, which is great if you’re thinking about buying one of these, and want to put some road mileage on it too.

But the chances are, you going to want to get it a bit dirty in the process, and that’s exactly where the 890 Adventure R feels most at home. Sure, I only did a few very light green lanes and gravel roads (the hardier stuff was closed due to the weather), but with a quick change of rider modes to the optional ‘Rally’ mode with the Traction Control Slip sitting comfortable in the middle, I couldn’t get my head around how effective it was at just finding grip and firing forward.

The throttle control feels nice and smooth and there never felt like there was too much power, and even though it sits in at 196kg, it didn’t feel especially weighty either, which was handy over softer ground. With a proper set of knobblies, it really would work wonders. 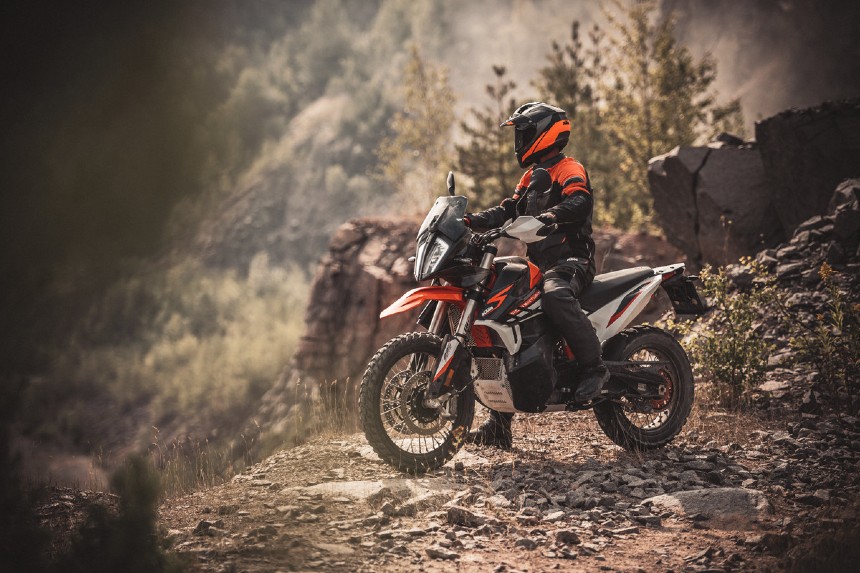 Sure, it’s no lightweight enduro machine, but for an adventure bike, it’s a mightily impressive tool, especially with the optional Tech pack. The 790 wasn’t a bad motorcycle in the slightest, but with these little tweaks the new KTM really is up there with the best of them, in terms of performance, ability and technology. But then again, with the optional extras it is a lot of money, and is it worth it?

If you’re serious about off-roading, then yes, but I’d suggest that this thing would be utilised best by an experienced off-roader, who’s willing to push the bikes boundaries. But then again, if you’re after something that’s barely going to touch the dirt, KTM’s standard 890 Adventure would be a much better avenue to go down, with its smaller wheels and road-orientated rubber. 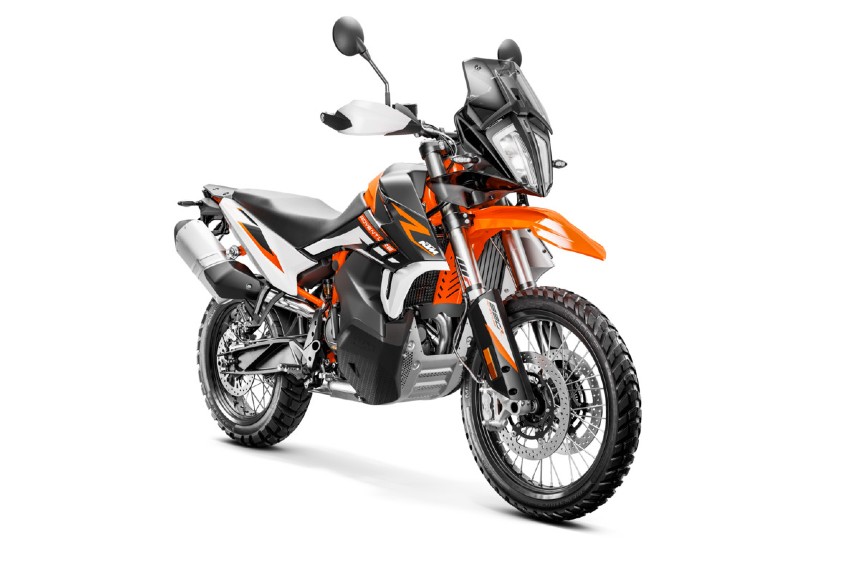