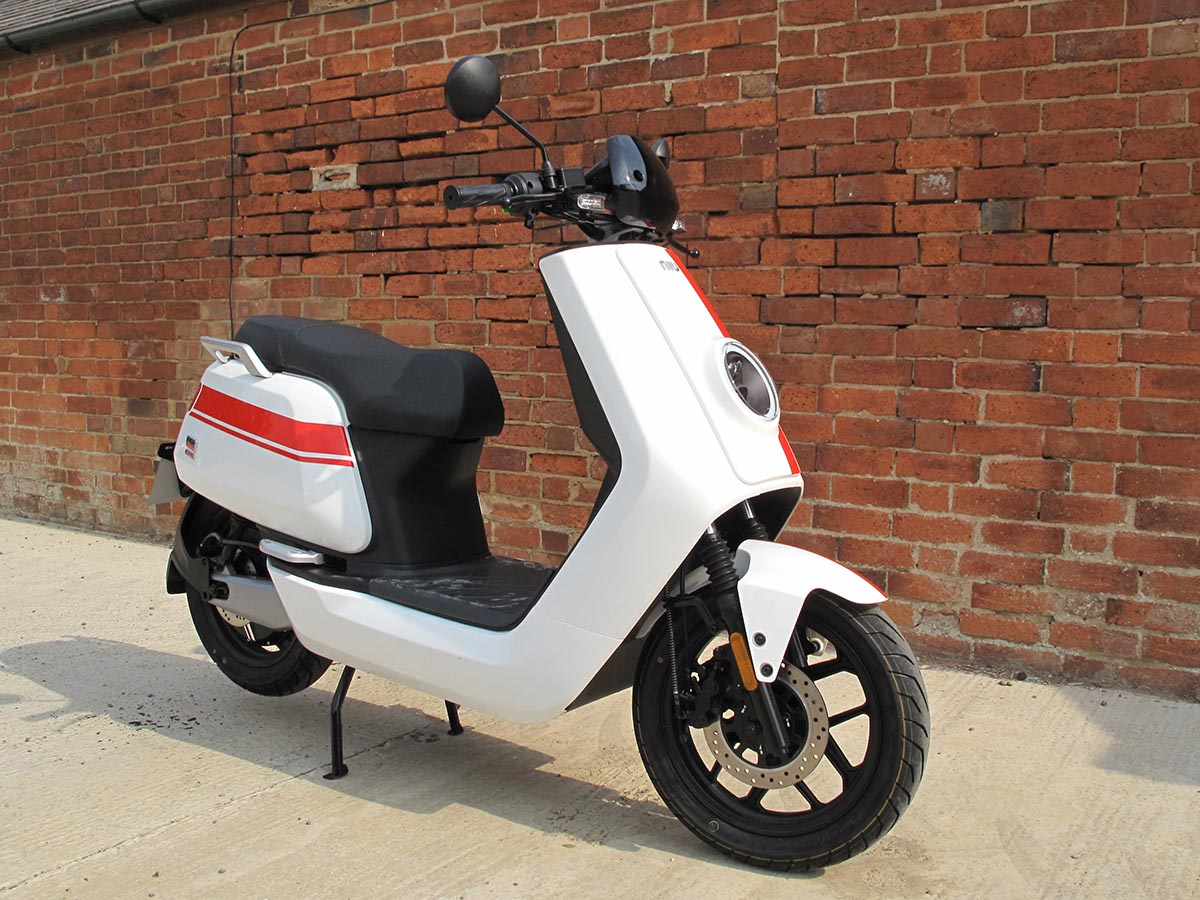 Along with Super Soco, NIU has been at the forefront of the new generation of small Chinese electric bikes which are starting to become an increasingly familiar sight in our towns and cities.

While Soco has developed a range of both small electric motorcycles and scooters, NIU has up to now focussed on scooters and, until the recent arrival of the MQi GT Evo, the NQi GTS was its range topper – an A1 licence machine in a range largely consisting of electric mopeds.

And it was good. The NQi GTS has been a swift seller, especially in ‘Cargo’ spec where it foregoes a pillion seat for a stronger subframe and a giant delivery spec top box. For commuters, however, it just lacked that last bit of oomph to allow it to compete with 110cc petrol scoots. A 45mph top speed was fine for the city, but 50 zones were a chore and dual carriageways could make the rider feel vulnerable. Thankfully this year’s upgrade has found another 5mph among its improvements. Sure, 50mph is not exactly ripsnorting and regular dual carriageway users will be better served by the 70mph MQi GT Evo (which at £4999 is £1000 more expensive than the base version of this machine), but that 10% improvement flat out makes a massive difference in usability for the everyday commuter. The NIUs are still also eligible for the UK Government’s Plug In Vehicle Grant which, although reduced, is still good for a few hundred pounds off at the time of writing. 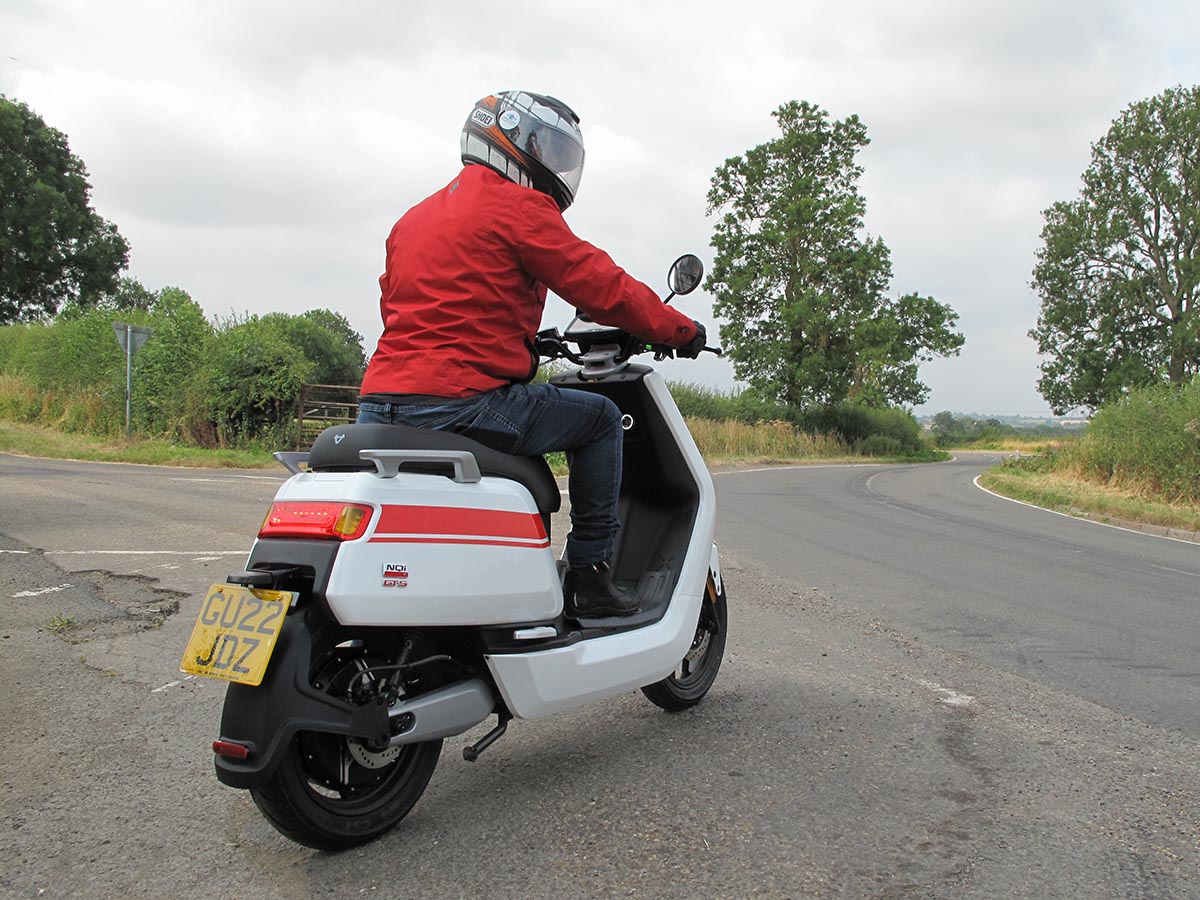 So what is a NIU NQi GTS?

To the uninitiated, NIU’s range is quite confusing at first glance. Model names are a collection of letters which make sense only to those who know. They denote the body style, battery tech, wheel size, performance and so on while the name ‘NIU’ is pronounced something like ‘new’. The NQi is the body style, a neat combination of modern and retro if you ask us, and ‘GT’ tells is that it has the bigger 14” wheels, but it’s a bit like buying a computer – with lots of different specs available on ostensibly similar looking products to meet the individual needs and budgets.

And that’s because, let’s be honest, NIU is very much a tech brand. This is a device designed to get you from A-to-B as efficiently, cheaply and cleanly as possible, rather than to stir the heart. That’s not to say it’s not fun, because you’ll be smiling from ear to ear as you charge through the traffic. There’s little that’s easier to ride and it’s cheap to run too. For many, the fact that it is electric and has no tailpipe emissions will seal the deal in itself.

While the MQi GT Evo stacks up against top 125cc petrol scooters like the Honda PCX125 and Yamaha NMAX, the NQi GTS we tested is closer to 110cc scoots like the Honda Vision and the recently defunct Suzuki Address 110. These 110s do have a small advantage when it comes to top speed, but the acceleration and instant response from the NIU’s electric motor are much stronger. The 110s are much cheaper to buy though, £2799 for the Vision against £3799 (inclusive of grant) for the NIU, although running costs will likely be cheaper on the electric options.

Another area where petrol scooters still hold an advantage is in storage. Where modern four-stroke twist and goes have large underseat storage bins, usually big enough to take a bag of shopping or to store a crash helmet during when parked up, the NIU has none. Actually, that’s not strictly speaking true, as you can remove one of the batteries for a bit of underseat storage, but the trade off is a reduction in range and a top speed capped to moped levels. If storage is important, accessory top boxes are available. The aforementioned ‘Cargo’ model, while many aimed at commercial users, is also an option – forgoing the passenger seat for a top box that can swallow more than a few bags of shopping.

A NIU way of riding?

There’s actually very little to say about the NIU and the riding experience, such is its beautiful simplicity. It is still supremely easy to ride and, as well as the additional top speed, this year’s MQi GT also benefits from a new TFT dashboard. To be honest, the old model’s LCD readout was already pretty decent, but the new one not only looks a lot classier, it also gives out a lot more information – for example instant power output – but the key things to know, like speed and battery state of charge are very easy to read. If the NIU is aimed at younger commuters then it certainly hits the spot – with the tech feeling every bit as up-to-date as the latest Apple products. There’s also an app which links to your phone. Among other features, it acts as a tracker – and there’s an in built alarm too. 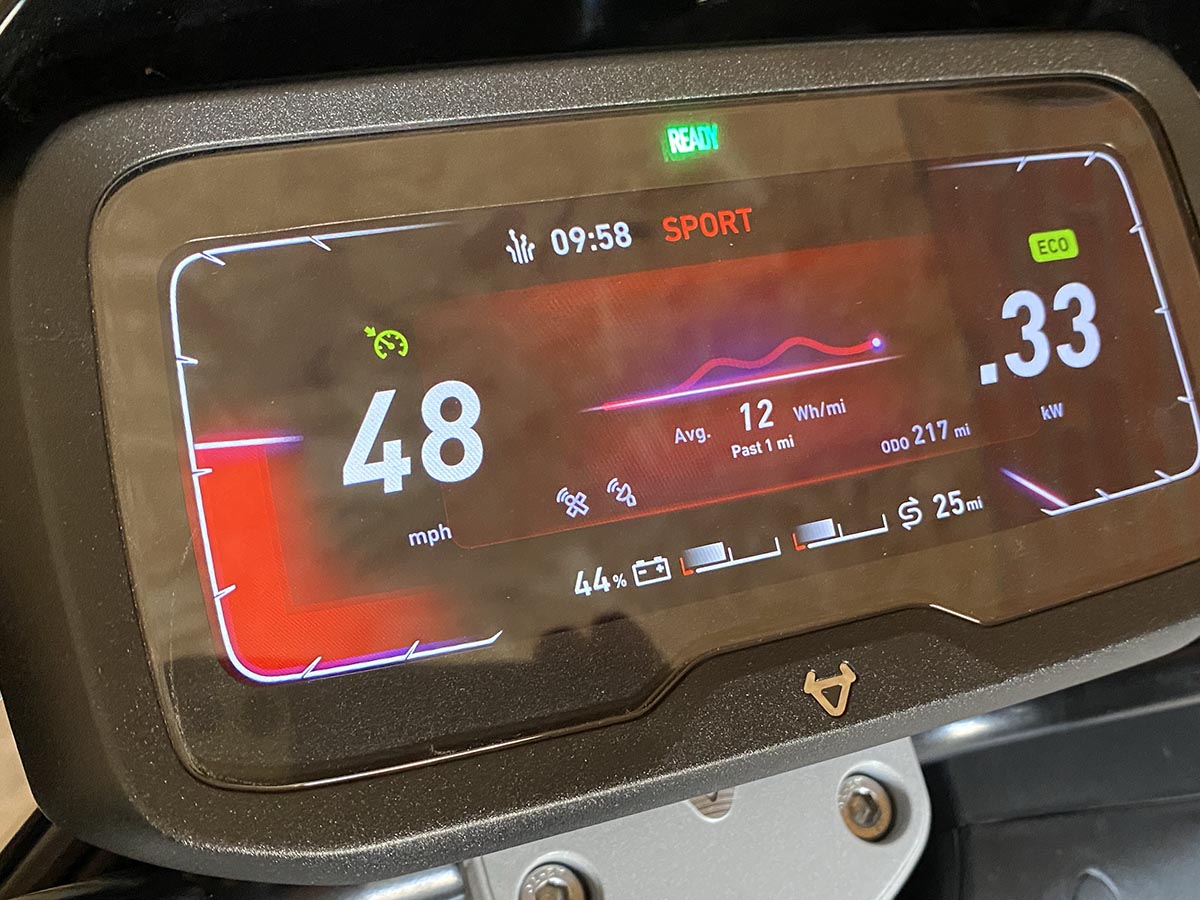 It looks stylish as well. Modern touches like the LED lights look great against the slightly retro body shape, while three colour options are very classy indeed. If you don’t like the white and red combo of our test bike, you can also specify plain gloss black or a very on trend matt grey finish.

There are certainly some nice touches, which don’t scream in your face but which do add to the overall riding experiences. Cruise control, while feeling like an extravagance on such a small machine, is actually very welcome on longer stretches where you might otherwise be holding the throttle wide open and there is a USB charging point too. In fact, if you use the NIU for darting around town the exposed handlebars allow for the easy placement of a smartphone as a navigation device, with the USB port handily placed below for it to be plugged in. There’s also a little storage bin that’s just the right size for a bottle of water, or take away cappuccino.

And while it doesn’t feel like a bike you’d naturally use to take a pillion, if your licence allows the NIU is very competent with a passenger on board. The pillion seat (and the rider one too, for that matter) is flat and well upholstered, while the grab handles are also well placed and reassuringly large. The retractable passenger footpegs seem a bit fiddly at first and don’t seem to want to fold in properly, but one you get used to them they are very good too.

And the torque and instant acceleration from the NIU means that it copes with the extra weight of the passenger pretty well too. The hub mounted Bosch motor is rated at up to 4.6kw (6bhp) and the dual batteries are good for around 40 miles on this standard version, or 55 miles on the ‘Extended Range’ version. This features more energy dense batteries, but is £1000 more expensive, at £4999. The batteries take six (seven with extended range) hours to fully recharge through a domestic socket, although it is possible to buy spare battery packs and swap them around – especially handy if you are using the scooter for delivery work. It is worth noting that you won’t be able to use all the battery capacity in the top Sport mode, as the bike defaults into ‘E-Save’ mode for the last few percent. That means a top speed capped at just 18mph, and it kicks instantly – regardless of what speed you are riding at or what roads you are on. Unless you’re riding at sub 20mph speeds anyway it is strongly advised not to let the battery get down that low. That instant transition to slow mode, rather than the graduated drop off in performance I have experienced with other two-wheeled EVs is probably my only real gripe with the NIU. 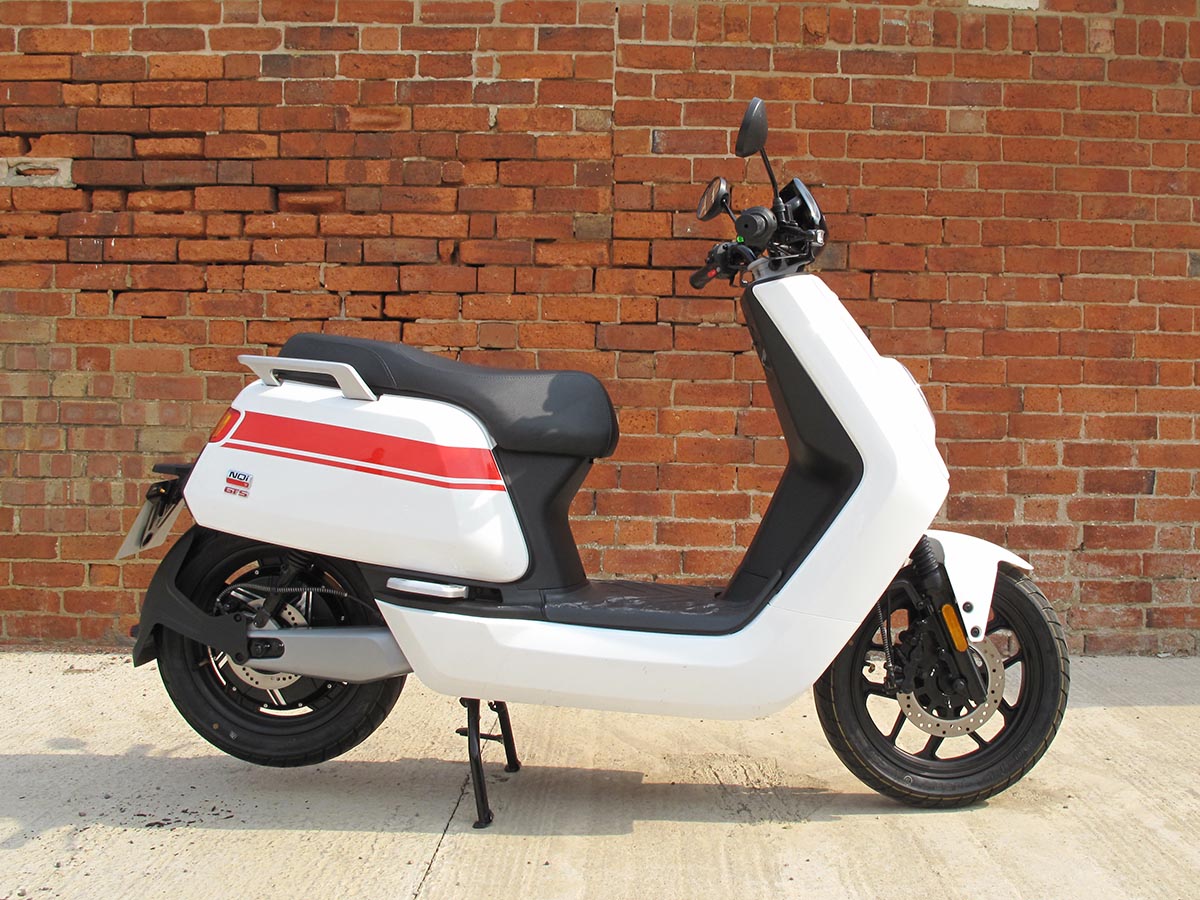 The NIU NQi GTS isn’t for everyone, but if it fits your lifestyle then it can provide the perfect mode of transport in today’s changing times. Sure, it’s more expensive to buy than a comparable petrol powered machine, but with petrol continually rising in cost and a desire to reduce tailpipe emissions becoming ever more prevalent, that will be enough for many to choose a NIU over a more traditional scooter.

Forget the numerous couriers, with whom NIU will likely find the majority of their sales, and as a commuting machine it makes perfect sense for many. If your commute is under 20 miles each way and doesn’t require speeds of over 50mph, it is definitely a machine worthy of consideration, but if higher speeds and longer trips are your thing there are a number of other outstanding machines that are probably better suited to your needs.