When emerging Chinese manufacturer Sinnis told us they’d built an A2 compliant 380cc adventure bike complete with luggage for under five grand, we couldn’t quite believe it. But just how good is it? We rode one to find out.

Adventure-style machines have come on leaps and bounds in the last 10 years or so, emerging as one of the hottest sectors on the market and selling by the bucketload. There’s now so much competition from pimped out low-capacity wonders to super-expensive litre bikes, which are so popular because they do just about everything on road (and even off it) so well. 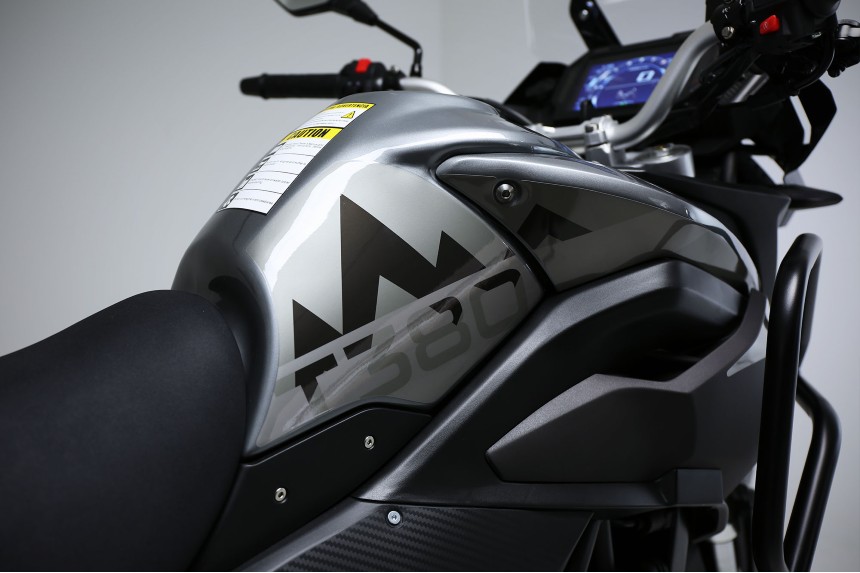 As the popularity has risen, as has the investment from manufacturers and indeed the average price of bikes too, with the range-topping bikes looking to set you back in excess of £15k. So, what does £4,495 (£4,799 for the model we tested) get you from Sinnis, the relatively new kids on the block? Looking at the spec sheet, quite a lot.

As far as performance goes, the T380 weighs in at 200kg. It is powered by a 380cc parallel twin engine that pumps out 36.5bhp and 26 ft-lb of torque, and which Sinnis tell us has been geared for acceleration rather than out and out top speed. 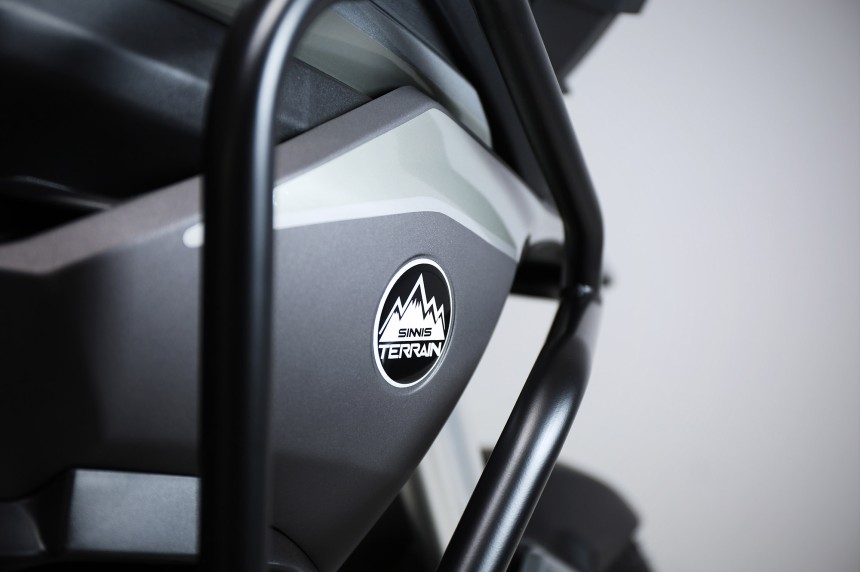 It comes equipped with an 18 litre fuel tank for good measure, while the chassis and suspension has been setup with road-going manners in mind but with the ability for a little dabble of off-roading too – especially considering that it comes with a 19” front wheel. And although it’s built to a budget, it comes equipped with a neat set of chassis guard rails, a 12v power supply, a USB slot, full LEDs and even a chunky TFT dash, plus the ability to have 105L of luggage for just an extra £304. So, how does it perform? 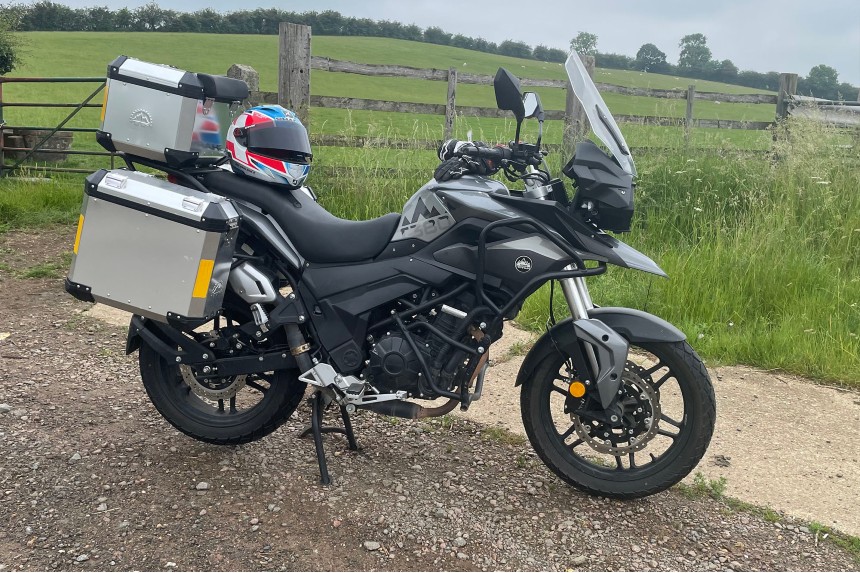 At first glance, the Sinnis Terrain 380 does look smarter than the price tag would suggest. From those big crash bars, to the 19” front wheel and even the fairly hefty looking luggage set, it does look like a proper machine, set up on its centre stand.

Jumping onboard, it really feels like one too; it sits up high, with an ample amount of space, and a surprisingly roomy cockpit. Surprisingly, when sitting on the Sinnis it really does feel anything other than a budget machine, thanks to that large and informative TFT dash, and the well-placed power sockets, offering a 12v power supply on one side, and a USB on the other for good measure. 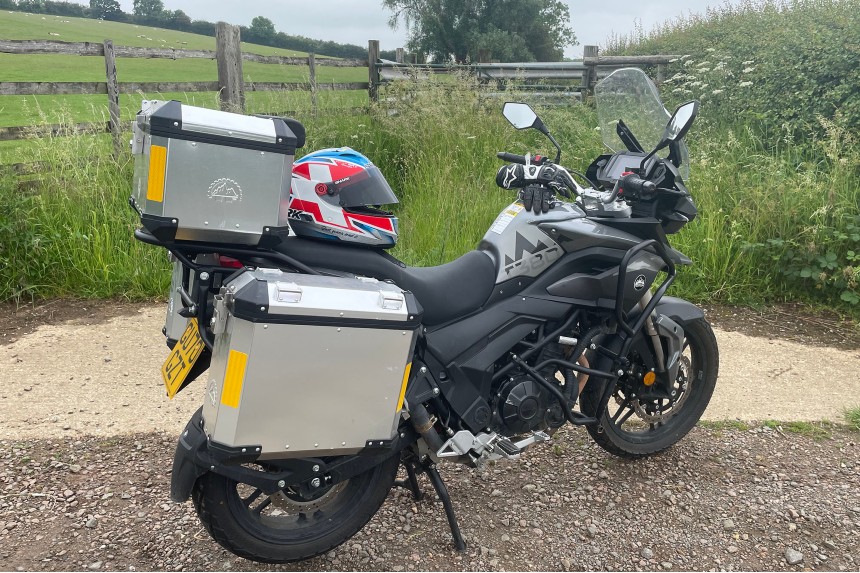 Although the controls aren’t exactly the most refined looking things on this planet, everything is exactly where I expected it to be, and with a quick rock, the Sinnis jumped off the side stand in anticipation of the adventure ahead. To be honest, with the T380 ready to roll and fully fuelled I was surprised at how heavy it felt; although it may only be A2 compliant, it felt hefty enough to be housing a much bigger powerplant.

However, firing it into life for the first time I’m quickly reminded that is just a little 380cc engine in-between my legs, with that familiar rasp of a parallel twin bellowing out. Instantly, the Sinnis felt at home with a really soft power delivery but it still offered a fair amount of go all the way up to the redline.

Keeping in mind the relatively high weight and the fairly low power and torque figures, the engine actually felt surprisingly strong, even if it does struggle to get much north of 70mph… although of course you’d never be hitting such speeds on Her Majesty’s highways! Saying that, it felt fairly happy sitting at that speed, so if you’re going to be munching mileage on the motorway, it’s surprisingly effective. 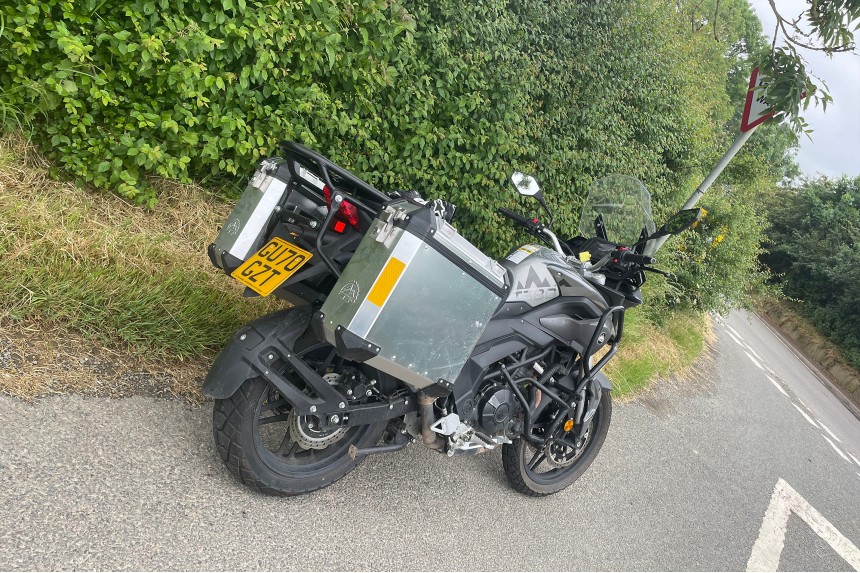 When hitting the corners however, the Sinnis T380 does find its limitations fairly quickly. Although partly adjustable, the suspension and chassis combination feels a little lazy and vague both on its way into and out of corners, and although it’s equipped with twin discs on the front that offer an ample amount of power, they do lack the feel when squeezed on with urgency.

Saying that though, it was only when riding fairly hard that it felt like that, and at normal bumbling speeds it’s more than happy and composed enough – and to be honest, with the dual-purpose rubber, you wouldn’t want to be riding too fast anyway.

Talking of the dual-purpose rubber, I did get a chance to take it down some gravelled road, and although it was a bit weighty for my liking, it held up perfectly fine, with a handlebar and peg placement that feels surprisingly comfortable when standing up. Saying that though, I don’t think that I would take this down too many heavy-duty green lanes, but for a spot of soft off-roading, it more than does the trick. 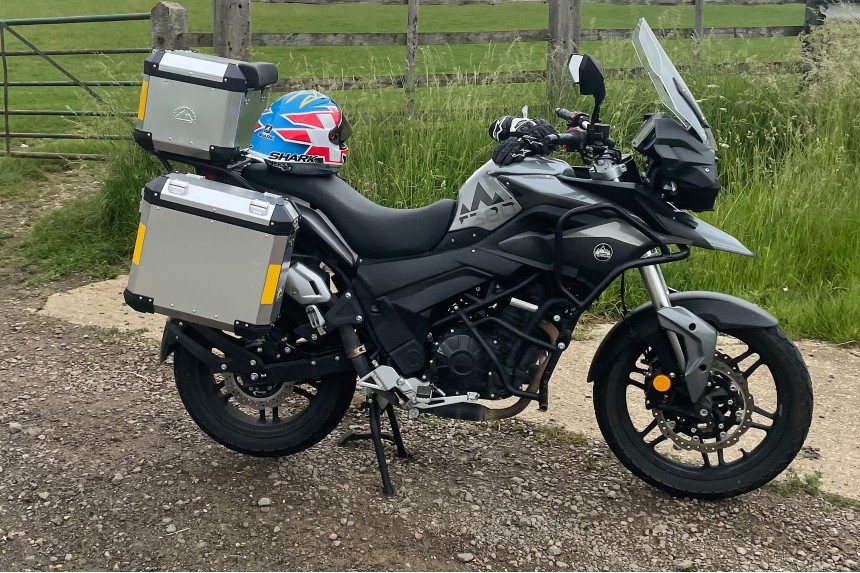 Arguably the closest competitor for the Sinnis Terrain T380 is the KTM 390 Adventure. It is a more modern design but comes in at £5849 before you even think about options such as luggage. When you consider what you get from the Chinese bike for under five grand, it really is impressive.

Sure, it’s not going to be perfect, nor will its performance blow your socks off, but it is surprisingly capable on the roads, with the ability for a bit of light off-roading too. If you’re on the hunt for a wallet friendly adventure machine whether on an A2 licence or not, it’s worth a look. Plus, they come with a three-year parts warranty too.