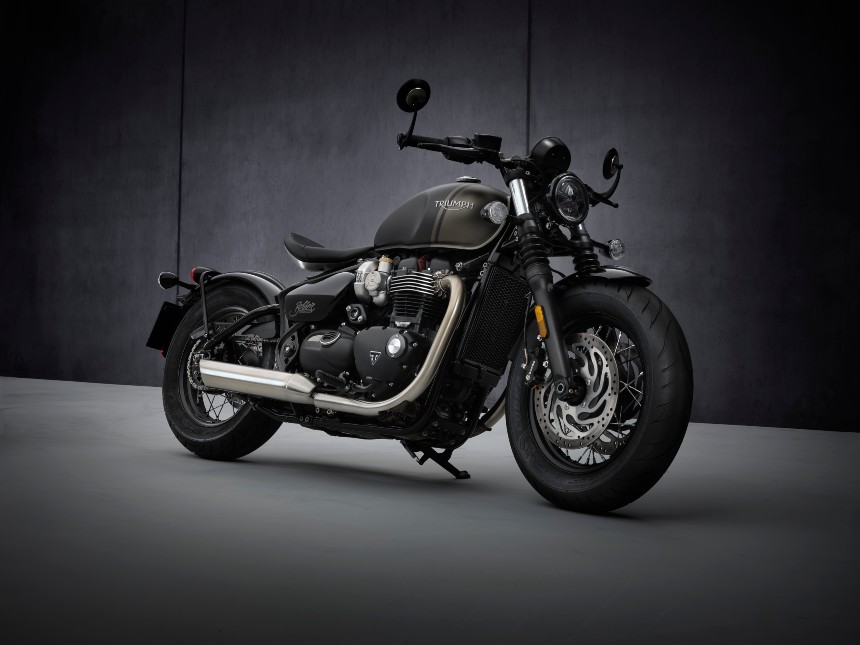 Triumph’s Bonneville Bobber not only looks the part, but it also rides it too. And for 2021, it’s been given a whole host of updates.

Between you and me, I’ve never been the biggest fan of ‘cruiser’ type machines. Don’t get me wrong, I’ve never particularly disliked them, but they never really did anything for me either, especially if there was a sporty, naked or proper touring bike on offer instead. But when the opportunity to ride Triumph’s updated Bonneville Bobber came along, I couldn’t get my bum on the seat quick enough… and for good reason too.

Since its release in 2017, the Bobber has been quite a success story for Triumph, pushing the envelope of their Bonneville range. Not only did it look the part but it performed incredibly well in terms of both its performance and handling, although it just needed a little bit of refinement around the edges which is exactly what Triumph tell us they’ve done for 2021.

Where recently there was the standard model and then a more expensive ‘Black’ model, for 2021 Triumph have just given the standard model all the goodies from its range-topping Bobber Black, including more powerful twin Brembo disc brakes and that distinctive 16” front wheel. 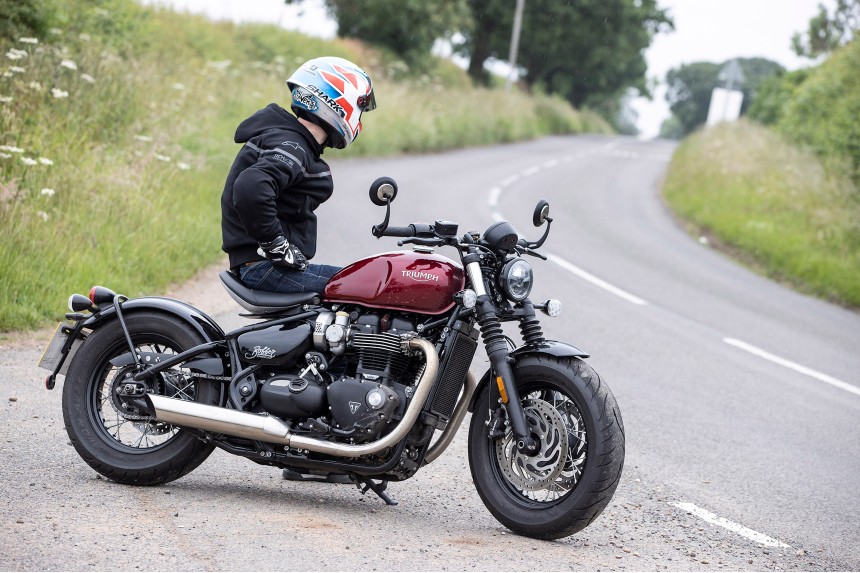 The engine has also been tweaked slightly. Not only is it now Euro5 compliant, it’s also got less internal inertia which Triumph tell us will give a better throttle response. The tank capacity has hiked from paltry nine litres to a more respectable 12, and on the handling side of things the forks are a slightly higher spec, while it gets an updated dash, LED headlight and even cruise control, all for £11,850. So, just how good is it?

The straight answer to that is, very. From the moment I set sights on the new Bobber, I knew I was in for a treat. Hopping on for the first time I couldn’t believe how light the Bobber felt, and even though the reach to the ‘bars was a fair distance for me, being able to adjust the seat placement is a brilliant feature to make everything fit.

With the ignition down on the right-hand side of the engine, the dash and cockpit look clean and uncluttered, although I have to admit, the indicator buttons are slightly out of place and a bit high for my liking. Aside from that, even though the tank is now slightly bigger, it by no means spoils the appearance or feel, especially as that 1200cc parallel twin roars into life. 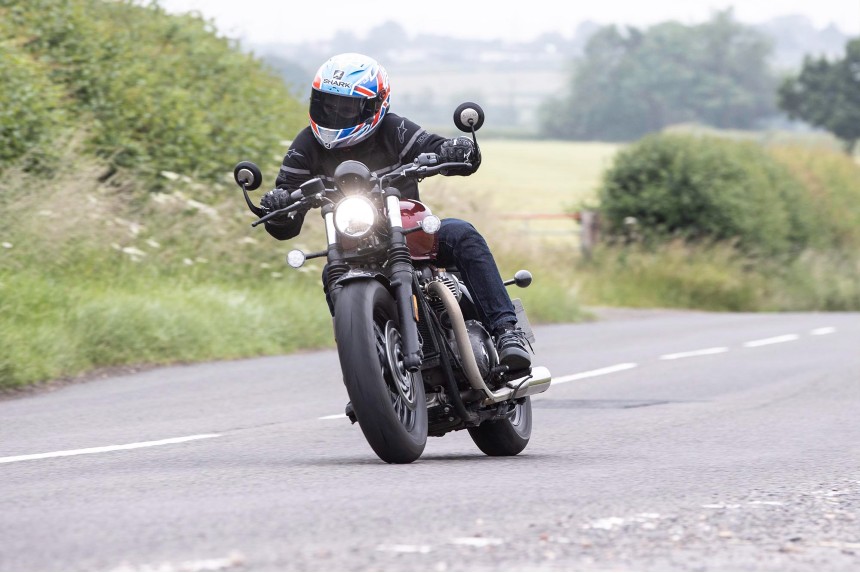 I’m now sure if it’s how the torque assist clutch is set-up, or the silly amount of hours that’s gone into perfecting the ride-by-wire throttle, but the Bobber’s low speed manners really are impressively good.

I’d actually go as far as saying that it’s user-friendly enough to easily be a first big bike for a new rider, as even with that big ol’ twin engine, it’s so soft and smooth below the 2000rpm mark. It feels incredibly poised and so easy to manoeuvre too, but it’s when that engine is wound on it really makes its mark.

Triumph have worked on making it spin up faster and it really does deliver a proper, characteristic thrust, alongside a rather impressive growl. Sure, a quickshifter would’ve been nice, but it’s not a massive deal not having one on a bike like this.

In all honesty, I was expecting the engine to be impressive but the thing that really made me smile was just how the Bobber handles; it feels nothing like it looks, in the best possible way. Whether it’s the uprated suspension, smaller front wheel or a combination of the two, the Bobber just effortlessly breezes through corners, with an eagerness to turn that I’d never expect from a machine in that class.

Even those new, twin disc Brembos worked an absolute treat, and it didn’t take long to find the limit at angle, with the only deciding factor being ground clearance as it didn’t take much at all for the Bobber to kiss the tarmac.

Saying that though, the surprise to me was that it didn’t need to be ridden insanely hard to feel like an exciting ride. Even just cruising along (which is helped by the simple and effective cruise control) the Bobber works wonders in making every mile feel both special and fun, thanks so much to just how well Triumph have paired a brilliant and characteristic engine, with a chassis, suspension and geometry setup that far exceeded my expectations. 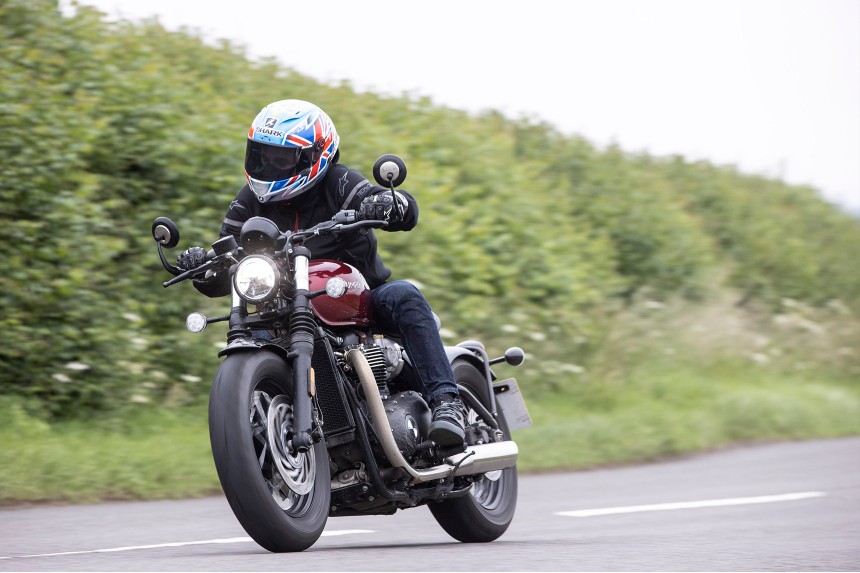 Triumph have received many plaudits for the Bobber in recent years, and I understand why. Not only did the Bobber really blow me away, but might also have converted me into a fan of cruiser-esque weapons.

From that monstrously playful yet easy-going engine, to its laid bike riding position and fine finish, Triumph really have worked wonders in creating an impressive machine, whether you want to scrape the ‘pegs away or just roll gently around town, showing off the Bobber’s rock star looks. If you’re in the market for one, book a test ride. I promise that you won’t be disappointed.