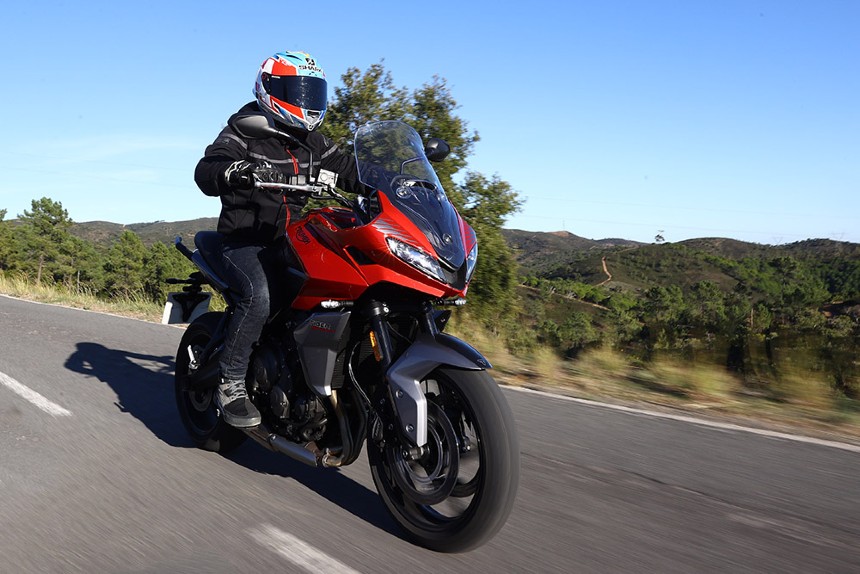 Triumph’s new Tiger Sport 660 looks to offer a lot of machinery and practicality for a relatively small amount of money. So, is it now the ultimate middleweight adventure machine?

I really do love the middleweight adventure sector. Sure, it’s not as packed as the big capacity end of machinery but with worthy offerings such as Kawasaki’s Versys 650 and Yamaha’s Tracer 7, you do get a lot of bang for your buck and the feeling that you are riding a ‘proper’ motorbike. Whether you fancy touring, going two-up or even a spirited Sunday afternoon ride, they deliver the goods for well under the five-figure mark and now there’s a new contender on the block.

When Triumph released their Trident 660 at the start of 2021 it seemed only natural that a mini Tiger would follow soon and, one year one, it’s here. Utilising the same 660cc engine as the Trident, the Tiger Sport 660 produces 64Nm of torque alongside 80bhp peak power, which delivers a sporty yet smooth and linear character throughout the rev range, the same as the Trident offers in such abundance.

It’s then been specced with Showa 41mm USD forks (with a longer 150mm of travel) and a Showa monoshock at the rear, which has not just been optimised for general riding but has been tailored specifically for a pillion too. Braking power comes from Nissin, with simple two-piston sliding callipers at the front, while the Tiger Sport 660 also comes equipped with pure road-focused five-spoke, 17” cast aluminium wheels, which are kitted out with Michelin Road 5 rubber. 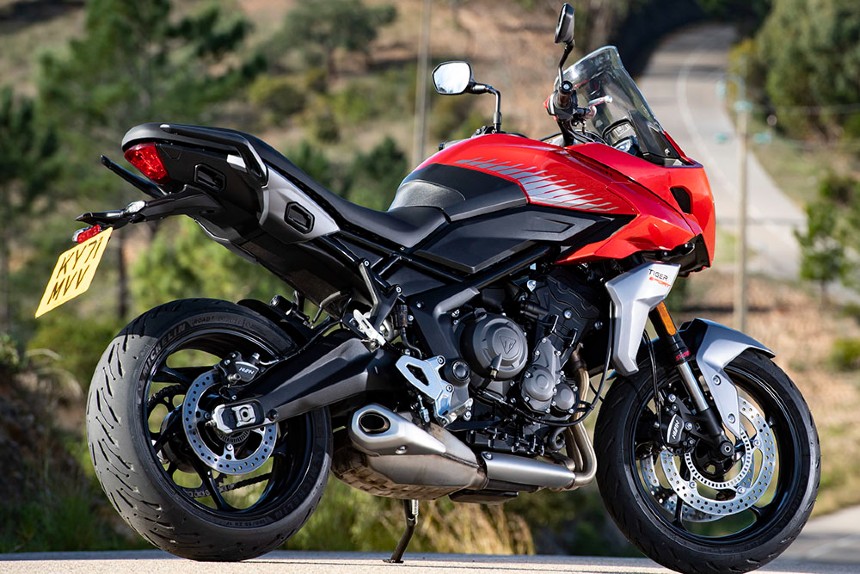 It’s not just a Trident with long-travel suspension and some shiny new bodywork though, as Triumph has given the baby Tiger a bigger 17-litre fuel tank, a manually adjustable windscreen and integrated pannier mounts designed to take the colour matched accessory luggage. Together, it makes the Tiger a whole lot more suitable for an adventure, touring or even everyday commuting.

They’ve lengthened the swingarm and given it a stronger, longer subframe as well – important for a bike designed to take pillion and luggage – and they’ve also gifted the Tiger Sport 660 with a fair amount of tech for good measure: you get a TFT dash, two riding modes, traction control, ABS, full LED lighting and self-cancelling indicators.

At £8,450 ready to roll, with a two-year unlimited mileage warranty and 10,000 mile service intervals, could this be the new king of the middleweight adventure segment? Well, we took one for a spin at the international launch in Portugal to find out…

At first glance, I have to say that the Tiger Sport 660 is a mightily impressive looking beast in terms of both its presence and its finish, even though I’m still not totally sold on that front end. For a sub-£10k machine everything looks clean and clear, and with that new TFT dash setup, you could very easily mistake it for something that was a little more expensive. It gives the exact information you need, in a clear and concise layout. 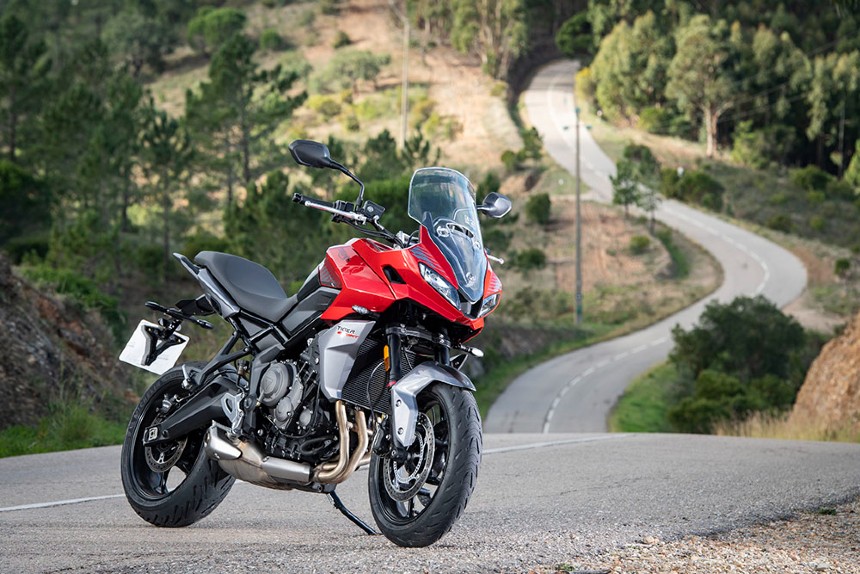 The same goes when jumping on board, as not only is the new tank nicely shaped but, thanks to that longer seat unit and the higher, wider and closer handlebar setup, the new Tiger Sport 660 not only feels like a comfortable machine to sit on but is also friendly to the smaller rider as well; although why they give an adjustable brake lever but not a clutch lever too, I’ll never know.

The seat height is a claimed 835mm. I’m only 5’7” (170cm) and I could easily touch the floor. Thanks to those tapered aluminium handlebars the reach feels nice and close too, especially considering how narrow the chassis is with that triple motor.

It’s so refreshing as well, to fire up that motor and hear the triple rasp from that underslung exhaust, rather than a booming ‘twin engine. We started the ride with some town work and the first thing that hit me was just sublimely smooth the baby Tiger felt; the ride-by-wire throttle is incredibly progressive even at incredibly slow speeds, and with 90% of the torque available from just over 3,000rpm, it really does chug along nicely in high gears.

The same goes for the handling too; even though it has a bigger stance with the long travel suspension, it feels incredibly well balanced at slow speeds, with a huge turning circle too.

But it doesn’t just bimble through town nicely, as we were straight on to a dual carriageway to check out its cruising abilities, where I felt that it was more than happy to sit in sixth gear at motorway speeds without too much of a buzz from the motor. 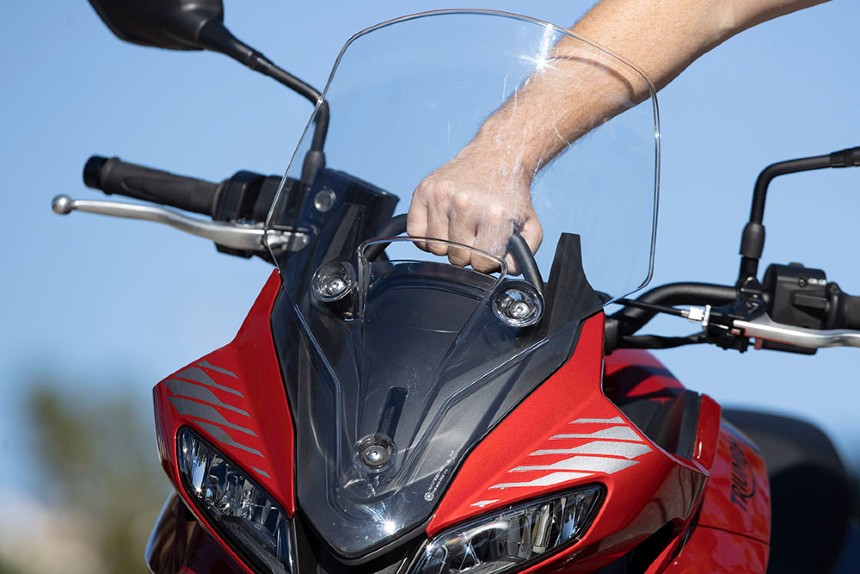 The hand-adjustable screen offered an ample amount of wind protection too, although with strong winds I did get a bit of buffeting and adjusting it on the go can be quite a fiddly ordeal; especially if you want to have it on a setting other than the highest or lowest available. Overall, it was incredibly impressive though and the only thing I really missed was cruise control, as that would’ve made such a difference to the overall package.

Thankfully though, it wasn’t all just bumbling through town and dual carriageway riding as we spent the afternoon riding some of the very best roads I’ve ever had the opportunity to sample; and here the Tiger Sport 660 really did deliver. Although it’s longer, heavier and comes equipped with long-travel suspension, thanks to that glorious chassis it does maintain a lot of the Trident’s agility and is incredibly impressive in terms of cornering ability, especially for a bike of its stature.

There’s bucket loads of ground clearance and the Showa setup just works so nicely without too much pitching on the way into corners and, even considering the extra weight, the Nissin brakes offer ample stopping power. It’s worth noting that although basic, the traction control and ABS aren’t ridiculously intrusive, and the engine is more than happy to oblige when revved and ridden hard; it’s got Sport in its name, and it really is sporty by nature. If you’re after a middleweight all-rounder that isn’t afraid to hustle, then the little Tiger will more than happily take anything you throw its way.

I did have a few little niggles with the Tiger Sport 660 though, with the main one being a lack of cruise control; it’s not even available as an optional extra, and Triumph tells us that there isn’t a GT model coming either. I know its competition doesn’t have cruise control either, but when it has a ride-by-wire throttle already it seems like a shame; especially as it has two rider modes, which it doesn’t need. 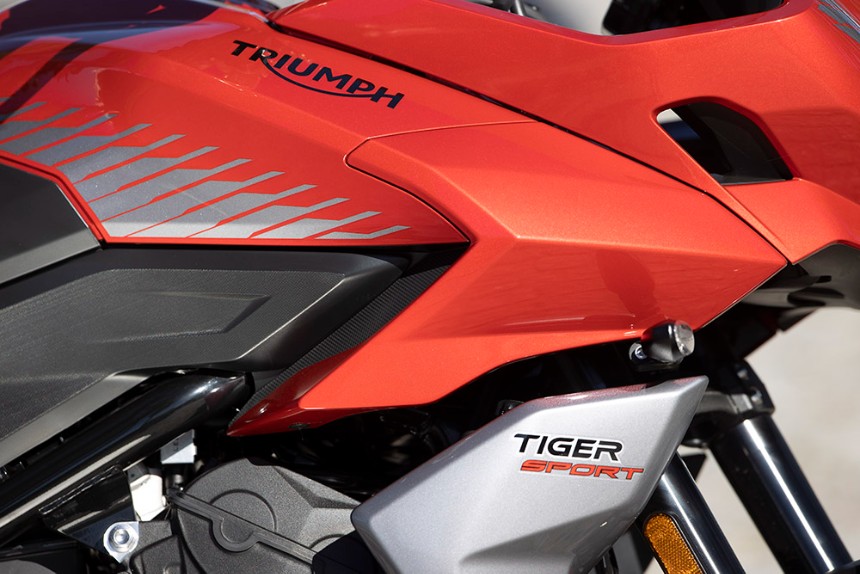 I tried it in Rain mode and although it softens off the throttle map, it’s so gentle in Road mode that I don’t feel like it’s necessary at all; I’d much rather have cruise if it was a trade-off. It’s also worth mentioning that the gearbox isn’t the most refined setup I’ve ever sampled, although I do think it really would work wonders having the accessory quick-shifter to smooth out the ride.

Most importantly for a bike designed to rack up big miles, after a full day of riding I really did feel fresh, which is mightily impressive considering how incredibly usable and compact they’ve kept the set-up; no arm ache, no sore bum… there’s no getting away from the fact it’s a lot of machine for the £8,450 price tag.

All in all, Triumph have created something that is seriously impressive; for £8,450 (or at £8,550 if you want the red paint as tested) you get the most powerful bike in its class, and the only one with a three-cylinder motor too.

Although it isn’t quite perfect, for a sporty, middleweight adventure machine Triumph really have created something that’s comfortable and fun in equal measures, and that is incredibly usable, even for a full day of riding.

Couple that with the relatively cheap servicing costs (the cheapest in its sector, Triumph claim), and it really is a package that’s difficult to look past; there’s no denying that the Tiger Sport 660 is the real deal.