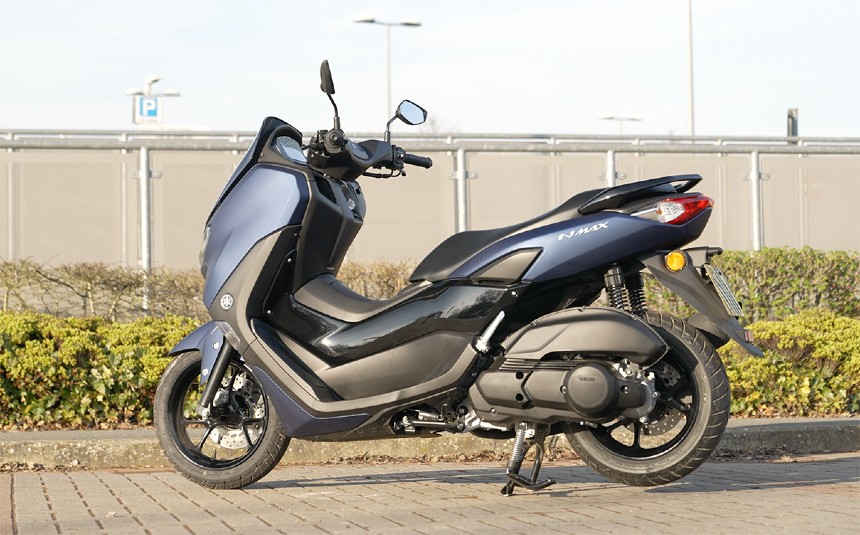 Forget the fire-breathing R1, the 2021 NMAX 125 scooter is Yamaha’s most important model. Yes, you did read that right.

There’s probably no better time to be talking about small capacity scooters like the NMAX 125 than right now. The events of the past 12 months has encouraged people, in particular those living in large towns and cities, to revaluate how they travel to and from work, to the shops, and anywhere else they’d usually be using public transport.

Along with the Honda PCX125, the Yamaha NMAX is one of the UK’s best selling powered two-wheelers. In fact, in the first four months of 2021, the recently updated NMAX sold more units in the UK than any other motorcycle. So what’s new for this year, and what’s it like to ride? 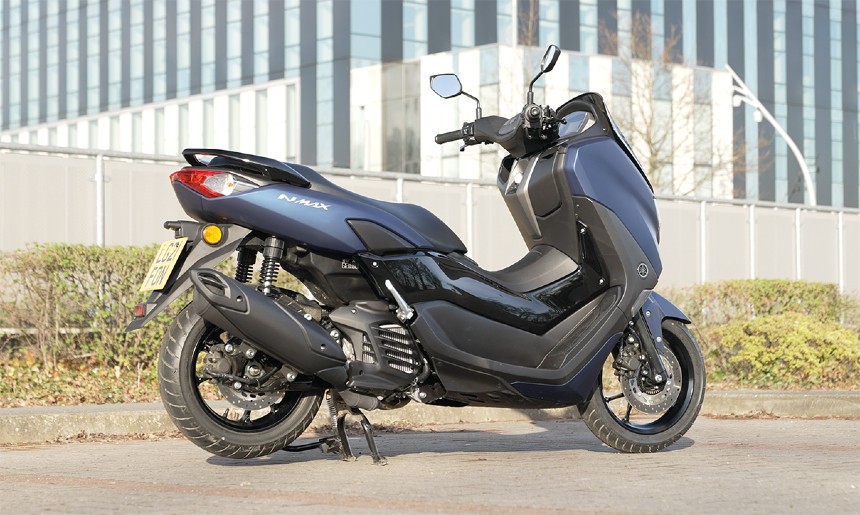 The NMAX has been given a full facelift for this year, featuring new bodywork, LED lights front and rear, and smart new wheels. All of these styling changes have resulted in a more contemporary look, but it’s still very much recognisable on the road as an NMAX. However, look under the skin, and you realise there’s much more to the 2021 model than meets the eye. 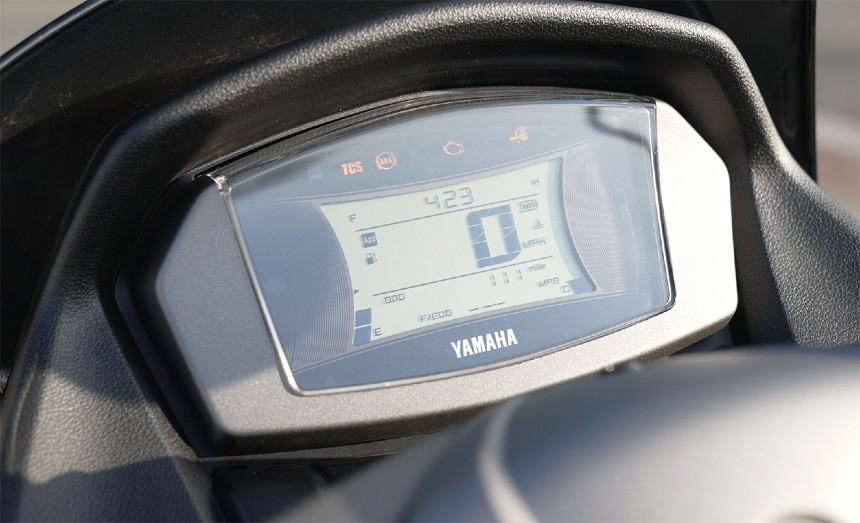 With the NMAX focused on urban riding, handling and comfort has to be excellent. And the new model doesn’t disappoint, thanks to some key tweaks to the frame and suspension.

Starting with the chassis, Yamaha has constructed a stiffer backbone frame, which has been optimised to carry heavier luggage and mount bigger storage accessories (music to delivery riders’ ears), as well as increased comfort. New rubber mounts also reduce the level of vibration felt while riding, and the new engine link has been designed to ensure plenty of storage space under the seat.

The front forks are a bit firmer than those on the outgoing model, which most riders won’t necessarily pick up on, but combine that small update with new preload settings on the twin rear shocks and it makes for an easy, stable, and confidence-inspiring ride.

Combined, the 13” front and rear wheels, and 131kg wet weight only add to the planted feel of the NMAX 125. It is agile in corners and easy to manoeuvre at slower speeds, or when you’re off the bike and wheeling it into a tight parking space.

Its sure-footed handling means that new and experienced riders can jump onto the new NMAX and feel at home after just a few miles, especially with its ABS equipped front and rear disc brakes and traction control as standard. These features might seem overkill for a 12bhp scooter, but with most owners likely to commute all-year-round, or using it as a working delivery vehicle, it gives riders peace of mind in all conditions, which is a nice touch. 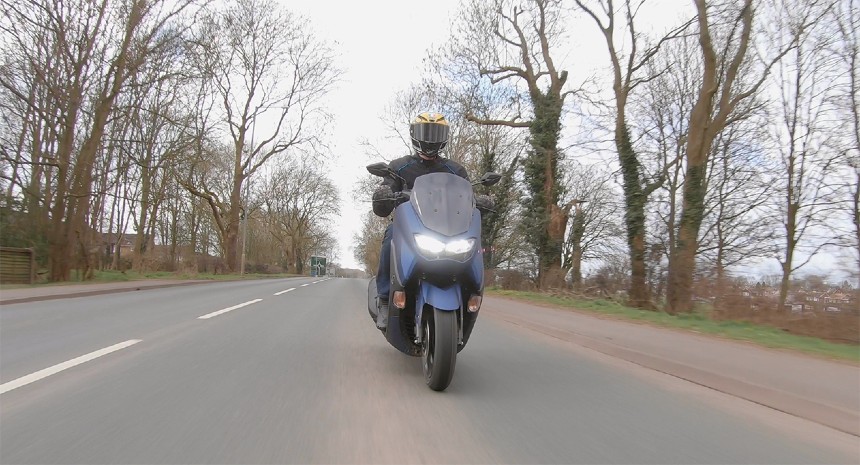 The Yamaha’s ‘Bluecore’ engine is where the NMAX has traditionally stood out from its competitors. Its Variable Valve Actuation system (VVA) switches the intake valve timing depending on the engine RPM – high cam at 6,000rpm, returning to the low cam at 5,500rpm. In layman’s terms, it means you can get the best out of the motor across the entire rev range, with strong torque at low speeds, and lasting power at the top end.

The only tell-tale signs that the VVA is in action is the slight change in exhaust note and a small indicator on the dash. But the result of something seemingly unnoticeable is a smooth, responsive and linear power delivery, and better fuel consumption.

Talking of fuel consumption, the introduction of ‘Start & Stop’ technology helps the NMAX to achieve 128mpg and reduce its emissions in line with the latest Euro5 regulations. The system, which is new to the Yamaha for 2021 but has featured in the scooter class for a few years now, has two modes – regular mode which doesn’t have a delay, and heavy traffic mode which holds off on cutting the engine for three seconds. Both work seamlessly.

Collectively, the changes to the 2021 NMAX in the engine department make for an effortless and rewarding ride, and has also helped to increase its range to 200 miles, up 22 miles from the outgoing model. 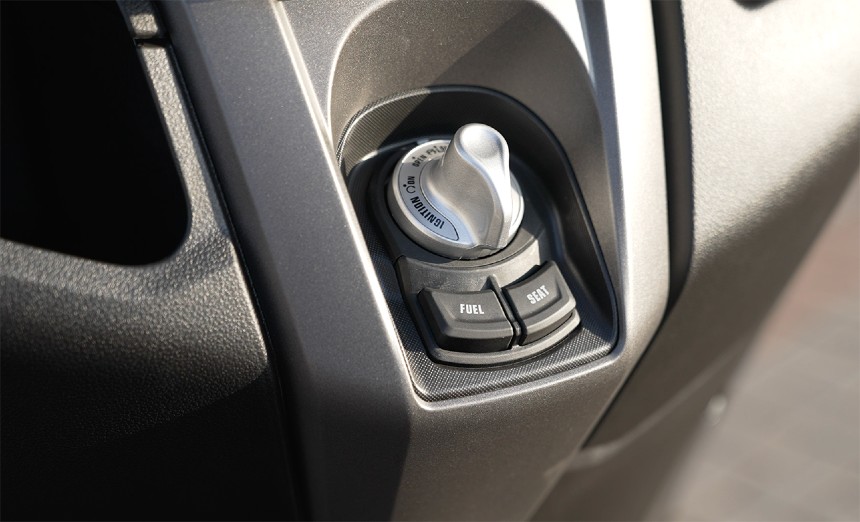 The whole point of the NMAX is to provide convenient personal transport. And for many riders, including myself, who get kitted up only to remember the key is in their pocket will welcome the introduction of keyless ignition. In place of the traditional ignition is an easy to use multi-function dial which operates the ignition instead, as well as the steering lock, access to the 23 litre under seat storage and the fuel filler cap.

You can now connect your smart phone through Bluetooth too, which displays basic notifications like an incoming call or text message on the new LCD screen. You can’t control your phone through the dash itself, but you can download data from the bike on the Yamaha MyRide app once you’ve stopped. Charging your smartphone on the move can be done too thanks to a handy front compartment featuring a power socket.

The more I rode the 2021 Yamaha NMAX 125, the more it made complete sense. It’s practical, easy to ride, economical and affordable, costing roughly the same as the average annual train ticket. At £3,399 on the road, it’s slightly pricier than the Honda equivalent.

If you live in and around a busy town or city, it’s the ideal choice. One thing’s for absolute certain, it beats running for the bus or standing on a packed train every day!