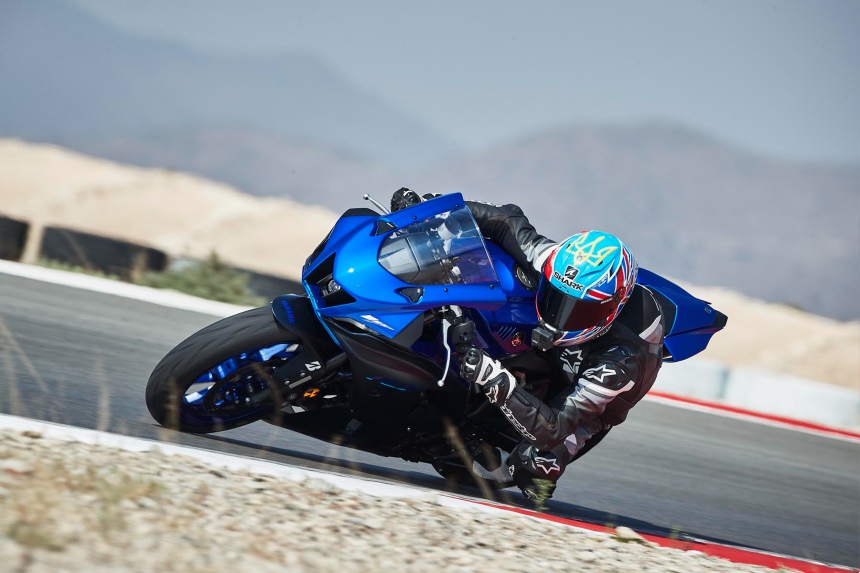 Is Yamaha’s new R7 a proper sportsbike, or is it a sheep in a wolf’s clothing? We tested one on road and track to find out.

When looking back at iconic sportsbikes over the past 30 years, it’s pretty much impossible to have a list that doesn’t include 1999’s YZF-R7, the super exotic homologation built for the golden era of world superbikes. But a lot has changed since then, and since 2000 there’s been a massive 77% drop in sales in the supersport segment. And now, Yamaha say that they’ve crafted a brand-new concept; a proper sportsbike that isn’t too focussed and is easy on the wallet too. Fun engine, proper chassis, barely any electronics… it sounds like it could be pretty special, right?

First off, this isn’t meant to be a rekindling of the R7 brand, nor a successor to the YZF-R6, which dropped out of the Yamaha range a few years ago. According to Yamaha, this is the reboot needed for the supersport segment, and they mean business too. Sure, this is based on an MT-07, but Yamaha have been seriously hard at work to create a proper machine, rather than just an MT with a set of clip-ons and a full fairing.

For starters, the chassis has seen some seriously big changes from its naked brother, thanks to centre bracing on the frame to increase rigidity, alongside a serious geometry change which not only makes the R7 (note there’s no YZF prefix on the new model) steeper with a shorter wheelbase, but also loads the front too, and lifts the rear.

The suspension has seen a big overhaul as well, with adjustable, upside-down forks that not only have a different pitch and offset angle, but even have the same spring rate as the R6. Couple that with a shock that’s been mounted slightly differently, Brembo brakes and some stickier, Bridgestone S22 rubber, and it sounds like a seriously mouth-watering concept.

And that’s not all. Although the engine is the same CP2 unit found in the MT-07 (as well as the Tracer 700 and XSR700), Yamaha have added an assist and slipper clutch, a different throttle body and even a smaller rear sprocket for a bit more top speed, while the ECU has seen some slight changes too. This all means that, according to the top brass at Yamaha, the R7 will offer ‘accessible, uncomplicated sports riding’. Now the question on everyone’s lips is ‘does it?’ 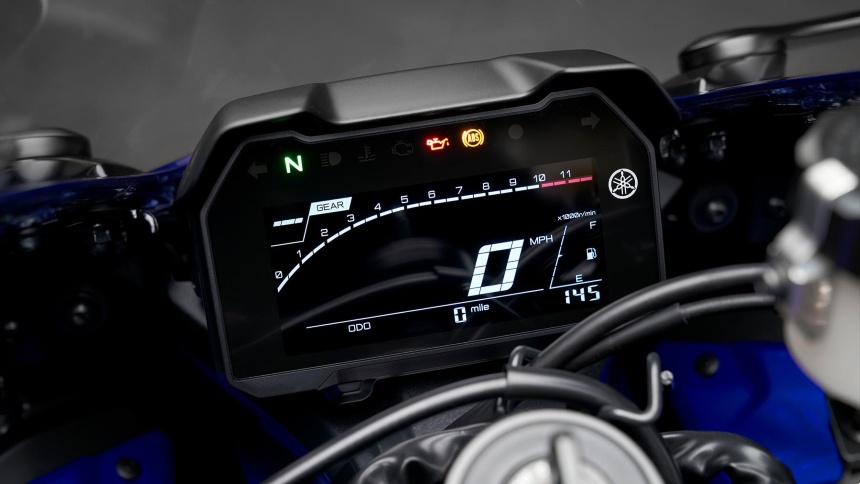 As far as the appearance goes, Yamaha really have hit the nail on the head in terms of creating an aggressively faired, yet still tidy looking sportsbike. It looks like a mini R1 with its sharp yet smart lines and its narrow, aerodynamic, appearance – so much so, in fact, that the R7 is actually 8% faster than the naked machine in a straight line. It’s got a fairly nice finish too when you consider the price, even though a few little details like the exposed side stand bolts and the thin, budget swingarm remind you that this isn’t a £20k superbike.

Jumping on it though, I could’ve been fooled into thinking it was. The previous R6 had one of the most aggressive riding positions of any standard machine, and the R7 feels nigh on identical, with its narrow chassis, low ‘bars and relatively high ‘pegs creating such a sporty stance, that I instantly forgot that this bike was anything to do with the MT range.

That is until I hit the starter button, however, as the CP2 burst into life – although it did come equipped with a more impressive growl than I remember from its sibling. I have to add too that having no rider modes or electronic aids to mess with was mightily refreshing. It doesn’t really didn’t need them, and it made the ride almost feel that little more visceral before even twisting the grip.

Setting off for the very first time through the little Spanish town of Mojacar, it was instantly clear that the R7 was no R6 but is instead so much nicer in terms of its gentle and torquey power delivery at the bottom end, which makes it a really nice little weapon to ride at slow speeds (even though its sporty stance hasn’t been constructed to be a comfortable armchair). It has been constructed to be a proper little supersports bike however, and it really didn’t take long for the R7 to get into its groove.

And by groove, I mean that instantly, it absolutely blew me away with not just how well it handled every single section of a corner, from support under heavy braking, to holding a line mid corner, to exiting on the gas with serious precision. The best thing though? Well, that was just how different it felt to the MT-07 that it loosely started life as.

Let’s just get this out there straight away: this is no budget naked with some extra plastic, it’s a real sportsbike with a zest for cornering that is incredibly reminiscent of the R6. The brakes, although not the meatiest in terms of feel and power are a serious step up from the MT too.

To be honest, the only sticking point from stopping the R7 being a full-blooded weapon is just that slight lack of top end, if you’re looking to push at licence-losing speeds. On the flipside though it does have just has just about enough power to keep things interesting through the tight and twisty stuff, and thanks to those serious handling abilities the R7 allows for so much corner speed to be carried through fast, sweeping bends that the relatively low power figures can be forgiven.

Saying that though, the torquey and smooth nature of the CP2 motor means that it isn’t the most scintillating unit in terms of character at the top end, when you get north of the 9000rpm mark. 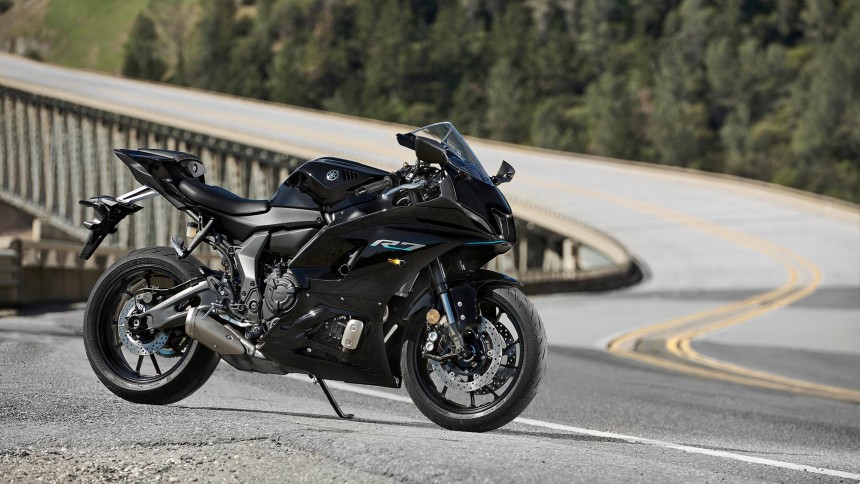 It’s fair to say that I didn’t want to get my hopes up that this thing would be a seriously mighty track weapon, but it really did prove my misconceptions wrong. That R6-esque stance makes it an absolute dream to climb around from corner to corner, and the magic that has been worked with the chassis and suspension absolutely shines when it’s pushed hard, offering up bundles of feedback – and don’t forget, the suspension is adjustable for preload and rebound too, so it can be really dialled in to the track and rider.

Sure, the engine isn’t the punchiest nor the most powerful offering on the market, but it does have just about enough go to be entertaining on a tighter circuit. There’s no doubt that the R7 would be better suited to Brands Hatch, rather than Silverstone, but for most UK tracks it will more than happily hold its ground. That is because it’s such an easy machine to ride and more importantly to ride quicky, as with no back-breaking power figures it will be a lot more user friendly than any of the litre machines on the market today.

It was quite refreshing not have to constantly fight with grip levels at the rear or power wheelies for a change actually, and even though the R7 has no real rider aids or modes, it does not need them, and I didn’t miss them at all. Unlike a lot of machines on the market (especially from Yamaha) the ABS wasn’t bad in terms of its intrusion, and the brakes offer up an impressive amount of power and feel considering the price tag, even on an incredibly warm day.

Overall, it’s a brilliant little machine and although I’d personally like a little more power, it still puts up a mighty fight. 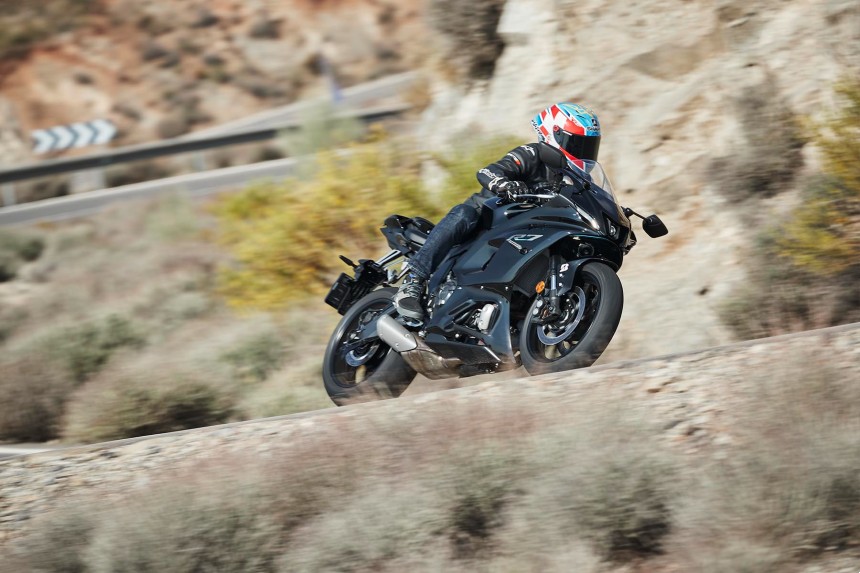 The changing sands of the sportsbike market has seen a number of less focussed, more day-to-day propositions in the marketplace: like the Kawasaki Ninja 650, Honda CBR650R and A2 contenders like the KTM RC390 replace full-on supersport machines such as the old YZF-R6.

In terms of price, the £8200 R7 is £1100 more expensive than the Kawasaki but the best part of two grand cheaper than Aprilia’s fancier RS660.

Now I’m not going to lie – I wasn’t particularly convinced when I first glanced over the spec sheet for the new R7, or the platform that it was using. But after a long chat with the R7’s project leader I was excited, and after riding it on both road and track, it’s fair to say that it absolutely blew me away.

This isn’t just a clothed MT-07, nor is it some sort of sad homage to an old machine that we look at with rose-tinted glasses; without blowing any smoke, this could be the saviour to a supersport class we’ve been long waiting for, thanks to not just its performance and handling, but the incredible price point which was the one chink in the spec’d up RS 660’s armoury.

I can hold my hands up and say that I wasn’t expecting it, but the new R7 gets a serious stamp of approval from me.