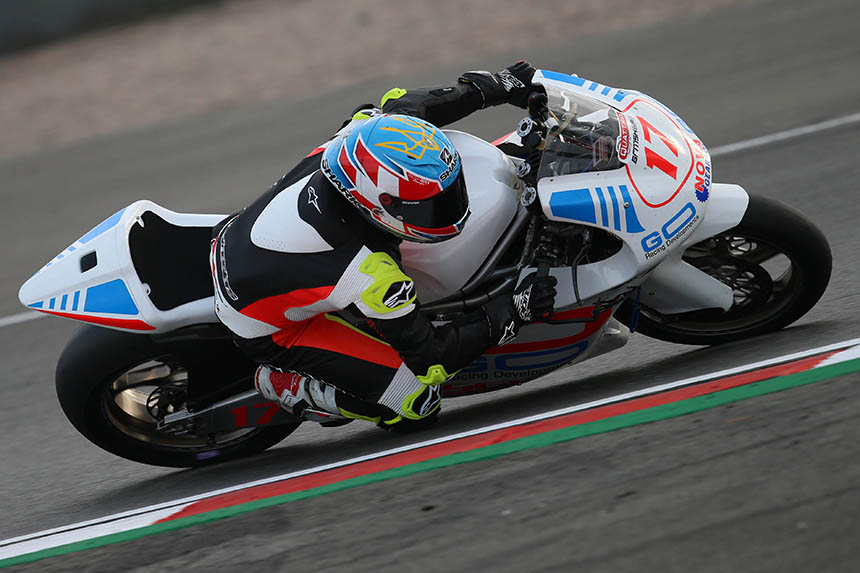 We’ve all heard the stories and preconceptions about prototype Grand Prix motorcycles: that they’re stiff, hard to ride and frankly useless to us mere mortals, unless ridden brutally hard to their limits on super smooth asphalt. But then, they also say these intermediate class Grand Prix bikes are the most divine two-wheeled machines on this planet to pedal around a racetrack. So, are they? Well, we got the chance to race the Go Racing SGR GP2 machine at Donington Park in the British GP2 class to find out…

Firstly, let’s look at the bike that we were fortunate to ride. Unlike the current era of Moto2 machines on the world stage, these bikes still run under rules similar to those used in the world championships before 2019; so 600cc superstock-style engines, rather than the 765cc Triumph triple units that power the likes of our very own Insidebikes ambassador Jake Dixon. The bike we swung a leg over was built around a chassis made by a Dutch company called Chassis Factory. It housed a bog-standard Yamaha R6 engine, which pumps out around 125bhp and has absolutely no extra or internal wizardry whatsoever. This is to keep things fair in a supersport race where the production machines can be tuned to produce more power (over 140bhp) but have to run their homologated road bike chassis and swingarm. 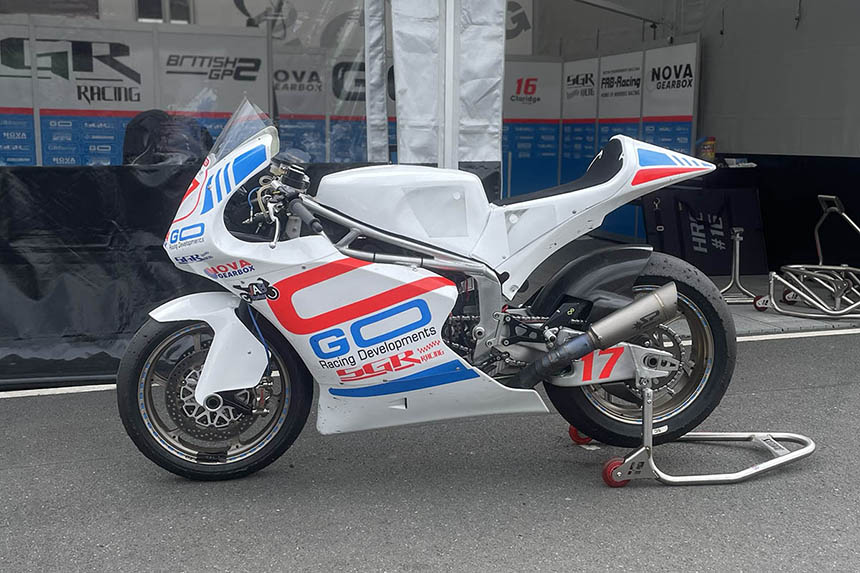 Because that is where the real magic happens with a British GP2 bike. The rules state that these bikes can use a full prototype chassis, swing arm, upper and lower yokes, bodywork and fuel tanks, with a minimum combined weight of 222kg for bike and a fully kitted out rider. To put that in perspective, a standard 1000cc sportsbike will top the scales at somewhere around the 200kg mark on its own, meaning that these bikes weigh in at under 160kg ready to roll. Combine that with superbike-spec forks and brakes, not to mention lightweight racing wheels shod with slick tyres, and you really can see why they are such potent beasts, and how they make up for a lack of power in other ways. In the British championship, the GP2 bikes race alongside the supersport machines and the top rider/bike combinations in each class produce very similar lap times.

Having never swung a leg over a prototype machine before, the first thing that got me with the Go Racing SGR GP2 machine was just how minimal it looked. Unlike on a production machine there is absolutely no waste in terms of components, as only the bare bones of a bike are retained in order to keep the weight down. It looks aggressive and sitting on the bike at a standstill it felt not only incredibly high but had an uncompromising riding position, one which felt spot on for a track machine. The ‘bars were low, the ‘pegs high and the seat and tank allow for a lot of movement on the bike, while retaining a grippy feel on the tank to hold on, which was something I’d be doing a lot of over the next three days. And with a set of the grippiest Pirelli SC X tyres up to temperature, a ride on this weapon couldn’t come quick enough. 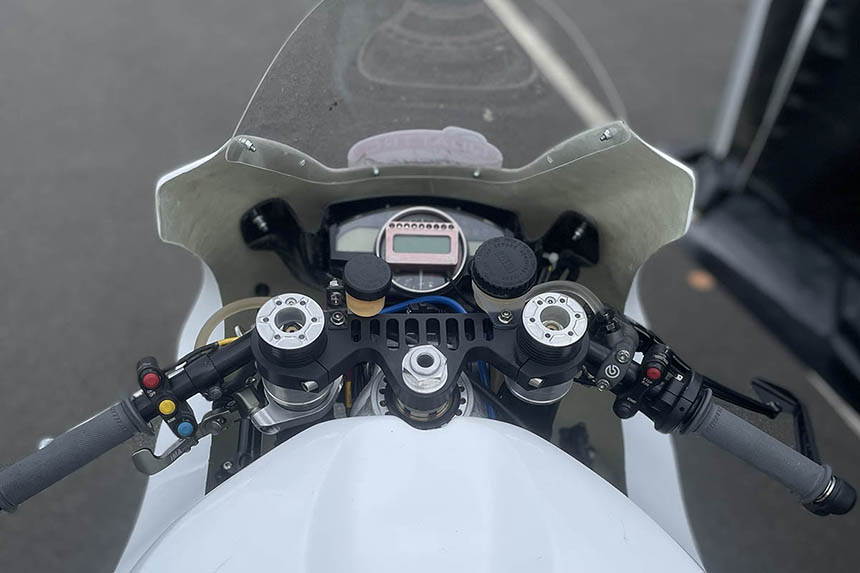 And wow, what a baptism of fire. Riding through the paddock and onto the track, the GP2 machine felt intimidating to say the least; there’s barely any steering lock, and the throttle response is aggressive as you’d imagine; made for the track, and not for car park speeds. Heading out of pitlane and into turn one though, boy I was in for a shock. Tipping in to Redgate, even at an out-lap speed, I almost ended up riding over the inside kerb; I have never ridden a machine that even comes close to the turning ability of this bike. The first few laps I had to literally readjust everything I knew, as even though I was still riding at a fairly slow pace and the front wasn’t loaded enough to work as it should (they need to be railed hard into the apex), it absolutely blew me away with its accuracy, thanks to the razor-sharp geometry and lack of weight. This is how all bikes should handle, and to my surprise, it didn’t feel overly rigid over the bumps and kerbs either, which was a big relief. What an absolute beauty.

Something that caught me by surprise in the opposite direction however is the power; it really doesn’t offer up any arm-ripping acceleration or aggression, and accelerating alongside a full-blooded supersport bike, it didn’t even feel particularly fast. It really needed to be singing, but the lack of straight line speed really did show just how hard these bikes have to be ridden through the corners to gain the time. It was only a few sessions later, with some new rubber, where I really managed to feel the bike’s potential… it turned into a whole different beast. 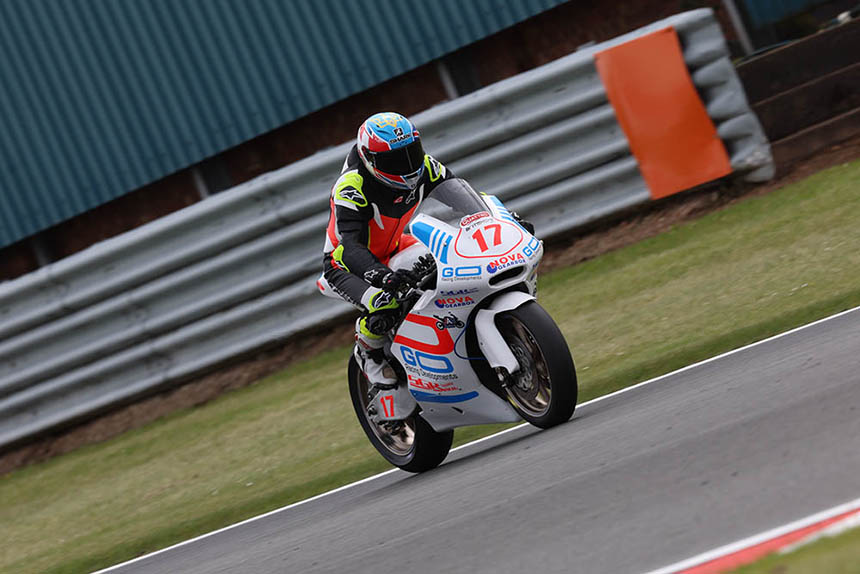 It wasn’t as unforgiving as I imagined it might be, but it’s still not easy. It’s without a doubt one of, if not the most physical machine I’ve ever sampled, thanks mainly to the insanely powerful Brembo brakes, combined with Brembo Z04 brake pads and that glorious, K-Tech front end set-up. Because of this, heading into heavy braking zones especially is hard work, made worse as it doesn’t come with an autoblipper. Now that may not sound like the end of the world but with less top speed and those insane Brembo calipers, the actual braking markers are mind-boggingly close to the turn in points, which means into the last chicane for example, I was getting down four gears in the space of what felt like seconds, tipping in while the rear end was still backing in. Yet thanks to the chassis and suspension combination, it felt natural, normal and controlled; I’ve never felt a bike slide into a corner with such ease and predictability. It felt like it was floating. But my god – after just a few laps your arms will start to feel it.

As I picked up my pace what really changed is the front end response mid-corner at full lean, as it actually started to slide as well. Surprisingly, this is a normal aspect of riding a GP2 machine and it took me all weekend to get my head around that feeling – in fact, even now, I still haven’t. At the apex, if the front wasn’t happy it would just eloquently drift, and although I was carrying as much corner speed as I felt possible, there was still way more to be found – every time it let go, I knew it was going to happen before it even arrived. Honestly, it blew me away how it would not only give such a warning in terms of a slide, but in a relatively soft manner. I still remember the first one I had going into the Old Hairpin and it didn’t snap and throw me off like I’d expect; instead it just went a foot off line and picked itself up. It’s fair to say that I wasn’t as controlled in that point than the bike was. That front end and chassis combination is magical combination, finished off with the gloriously sticky slick rubber.

But it wasn’t just about railing in harder than I ever have before into corners – because of the lack of power, getting out of them has never been so important. Having the data to back it up was embarrassing after the first few sessions to say the least, as there’s no hiding from the graphs. I was picking up the throttle at about the right point but my transition from 40% throttle to 100% throttle was too slow; I was riding it more like a stop-go big bike, rather than a Moto2 machine. To put it into perspective, you really need to be at full throttle before your knee leaves the tarmac, which melted my brain after 10 years of trying my very best not to send myself to space, opening up the gas right on the side of the tyre. The bike was capable of this but after just a few sessions my head wasn’t… ah, what I’d do for another go on that weapon.

Overall, the Moto2-style machine really did surprise me. Although they’re dubbed as these super stiff, rock hard weapons, it was an absolute joy to ride, and the harder I managed to push it, the better it felt. They’re easier to ride than I anticipated, but they’re not easy to ride fast by any stretch of the imagination however; thanks to a lack of power, all the time is made up from cornering, and thanks to a lack of tech such as even the basics like traction control, it really is all down to the rider on top. After sampling this slice of handling heaven, riding a bike on track will never be the same again…