Yamaha’s new-for-2019 Ténéré 700 is one of the most eagerly anticipated motorcycles of the year. Since the first Dakar inspired concept bike was trailed in 2016, there’s been no shortness of interest in the latest bike to wear Yamaha’s famous off-road name plate. But can the finished article live up to the hype? Roland Brown reports from the world press launch in Spain… 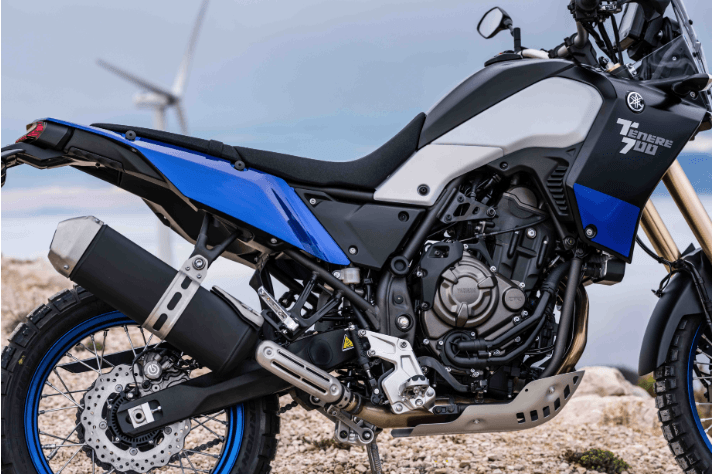 Many adventure bike riders have been waiting for a new-generation Ténéré ever since Yamaha launched the MT-07 five years ago. That light and torquey 689cc naked twin has sold in huge numbers. It also spawned the retro-styled XSR and sports-touring Tracer variants, and has promised to be an ideal base for a dual-purpose derivative.

And you’ve only got to register its launch price of £8399, way below the £10k-and-plenty of those bikes, to realise that Yamaha’s contender stands alone in the adventure market. Perhaps that’s appropriate, for a model that owes its name to a vast north African desert – proving ground for the original XT660 Ténéré single back in 1983, in the wake of Yamaha’s victories in the first Paris-Dakar rallies of 1979 and 1980.

This Ténéré is a parallel twin, of course. It’s powered by the MT-07’s twin cam, eight-valve engine in mechanically untouched form. A new airbox and exhaust system, shorter gearing and an uprated cooling system make the liquid-cooled unit more suitable for dual-purpose use without affecting its power output all the way to the 72bhp maximum.

Just about everything else is new, starting with a tubular steel frame that features two bolt-on front downtubes. The frame was extensively fine-tuned to give an optimum level of both strength and stiffness – a process that was continued after the T7 prototype was extensively tested by riders including Dakar ace Stéphane Peterhansel and globetrotting legend Nick Sanders, causing Yamaha to build in more flex to improve the bike’s feedback.

That Ténéré name has always implied off-road intent, and the new bike’s T7-derived look confirms this remains true. The tall screen sits in front of a quartet of LED lights and a high-level instrument panel with a hint of rally road-book. There’s a bar above for mounting satnav or camera, and a 12V socket alongside. Other near features include the height-adjustable front mudguard, broad-footed sidestand, serrated and hinged footrests, and the seat’s built-in luggage hooks.

Suspension is suitably long-legged, with 210mm from the forks and 200mm from the piggy-back shock. At 875mm the seat is tall, and fairly slim. Wheels are in off-road friendly sizes of 21in front, 18in rear, wearing Pirelli’s Scorpion Rally rubber.

On the road the Ténéré is enjoyably lively, managing to supply much of the MT’s zip and charm despite its longer wheelbase and wet weight figure of 205kg, 23kg up on the naked bike’s. The torquey engine pulls smoothly from 4000rpm and stays smooth up near the 10,000rpm redline, while the 270-degree crankshaft ensures a pleasingly lumpy character.

In town the short gearing means first is barely required, and the tall seat means shorter riders will struggle to get both feet down at a standstill. But the slim seat aids manoeuvrability while also giving reasonable comfort, in conjunction with the excellent ride quality delivered by that generous and very well-controlled suspension travel.

If the Ténéré can’t match the MT-07’s agility it has distinct advantages on the open road, where its roomy, upright riding position and reasonable amount of wind-protection combine to give effortless cruising at up to 80mph, well short of the 120mph top speed. The lipped screen can’t be adjusted and generates some turbulence, especially if you’re tall, but there’s plenty of long-haul potential, helped by 50mpg-plus economy that means most riders will manage 200 miles from the 16-litre tank.

Twisty roads are fun, too. The suspension might give plenty of travel but there’s sufficient damping to prevent excessive pitching under braking or acceleration, even on standard settings. The front brake isn’t particularly sharp, designed for off- as well as on-road use, but can generate some stopping power when given a good squeeze. Steering is fairly light yet the bike is very stable, and the dual-purpose Pirellis grip well on Tarmac. 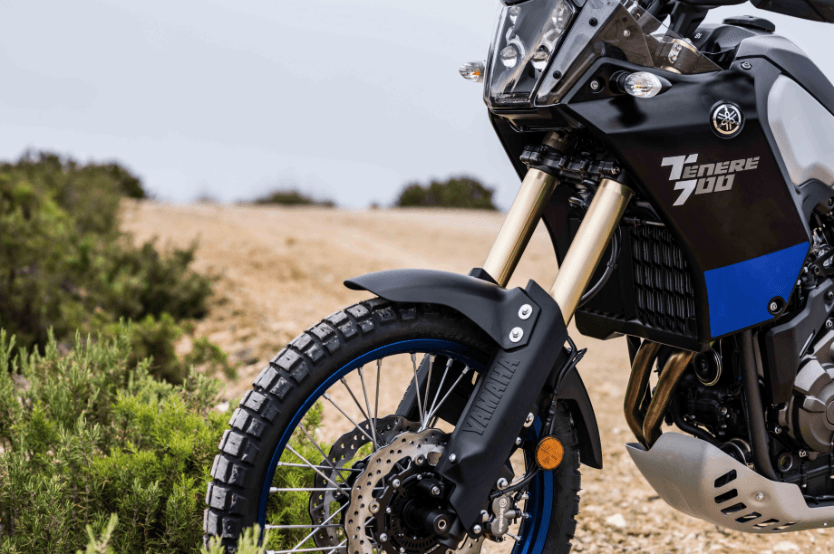 Like the MT-07, the Ténéré is a fairly simple bike with no alternative riding modes, traction control or cornering ABS; just a button on the dash to turn off the anti-lock when off-road. In fact the ABS copes fairly well on loose surfaces, where the rest of the bike is very much at home.

The torquey twin-pot motor is excellent off-road. It supplies sufficient low-rev grunt to negotiate tricky terrain, and enough at higher revs to make the bike great fun on more open stretches. A top-class traction control system would be a benefit but the Ténéré’s simplicity and sound throttle response combine to make the bike very controllable without that complexity and expense.

Chassis performance is excellent, too. Yamaha’s efforts in fine-tuning chassis rigidity have paid dividends because handling is light yet very stable and forgiving, aided by the quality of the suspension at both ends. The KYB units soak up most bumps without a twitch, even on standard settings, and have scope for damping tweaks as well as a useful remote preload adjuster on the shock.

Being very tall, the only adjustment I needed was to rotate the handlebar slightly to raise the grips for when standing up. An accessory bar spacer later added some useful height. There are many other extras, some grouped in packs. The Explorer Pack comprises engine bars, thicker bash-plate, centre-stand, single-seat rack and aluminium panniers, costing £1690.70. The Rally Pack, featuring Akrapovic silencer, taller seat, radiator protector, LED indicators and aluminium chain-guard, is £1486.

Most buyers are likely to opt for some extras but even in standard form Yamaha’s long-awaited adventure twin is mighty impressive. It’s enjoyable, respectably quick and hugely capable both on- and off-road, and at £8699 (or £300 less if ordered before the end of July) it’s very competitively priced. Those five years since the MT-07’s arrival seem an age but the Ténéré is well worth the wait.